In the middle of a night I woke up because of a big booommm with the impression that the whole house was shaking. Mr. G. once again had fallen out of his bed. I switched on the light and looked into his room where I found him sitting on the floor like a roman imperior with the bedlinen draped around his neck and body blinking at me blinded by the light. The bedside table had slid against the wardrobe and a few Ferraris lay on the bed which had fallen from the shelf above the bed. In the middle sat cat Pookie with eyes like saucers obviously very offended.

I asked him what happened. He told me that he had tried to save Ines, because she had slipped and was falling down the steps to the basement.

Ines ??? I tried to remember, she died at least 25 years ago, was one of his aunts in Italy who sat like a fat bee queen in her appartment and received family members who hoped to get some of her money when she died.

Mr. G. tried to gather his bones and got up with the grace of an elephant and sat on his bed. Apparently he had tried to catch her in his arms, had jumped and fallen out of his bed. I told him that he was lucky that he didn't get her he would be flat like a pancake by now due to her weight.

Last time he fell out of his bed and I was disturbed in my precious beauty sleep, he had tried to hide behind a bush because somebody shot at him and of course he had landed on the floor where no bush was growing.

Since he is retired, he has action dreams. 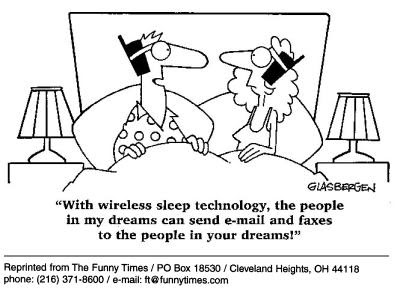 OMG your precious beauty sleep. That alone just cracked me up.

♥LOVE♥ the wireless dreams! That is just too good.

My comic strip, weekend funnies, is posted. Scroll down below my 6 word Saturday and my Camera Critters ...

You are so clever to write in a comical style in English.

Poor Mr G. Hope he did not get bruised. LOL! The whole thing was so funny!

love those funnies. and how is the heat there- we are melting here.

I SO wish you would grab your camera when Mr. G falls out of bed! That man falls out of bed in the most intersting WAYS! LOL! Maybe you should get him a WATERBED ... they are very hard to fall out of! Or even GET out of! :)

Falling is nothing. I'd only worry if he started sleepwalking ;-)

The leaves fallin' too cute Gattina! Action dreams? Hilarious! have a funny weekend!

I'm just glad Mr G didn't break his arm or something. My late father liked dogs but he was always dreaming about dogs attacking him and would be yelling in his sleep until my mother elbowed him in the ribs and told him to pipe down, he was waking the whole neighbourhood.

The other night Hubby says he was getting up to visit the men's room in the middle of the night when all of a sudden I heard boom! He too had fallen out of the bed! He claims that Fritz tripped him, but I know better. We must watch our old boys!

tell him that I enjoyed his action dream vERY MUCH. ha ha