FROM RUSSIA WITH LOVE !

We haven't got a postcard "From Russia with love" but immediately their temperatures ! In Brussels we reached - 11°C (12 F) in the Ardennes - 20°C (less than 0 F, my converter refused to go further down). 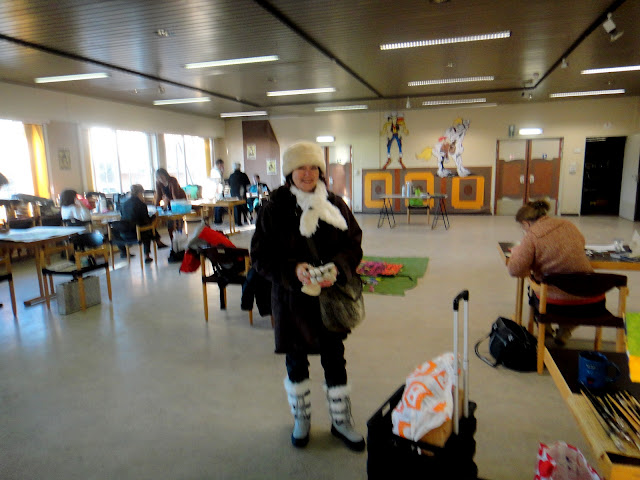 So when Ilona arrived in this winterly outfit in our painting class, we all laughed, but not for long because the next day 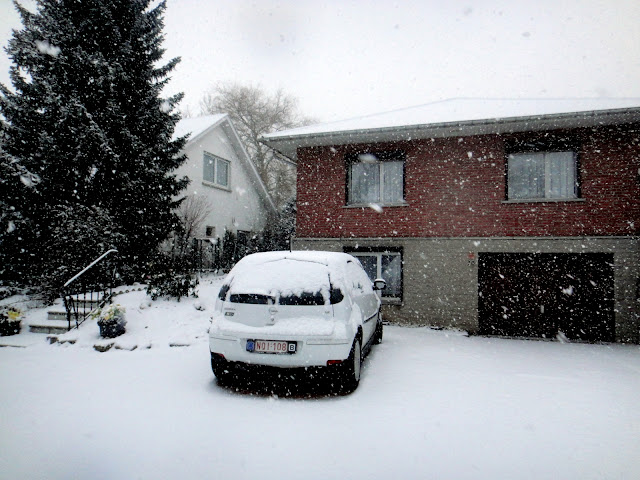 it snowed too. And if it continues like that, I will send you an S.O.S. to dig me out !! 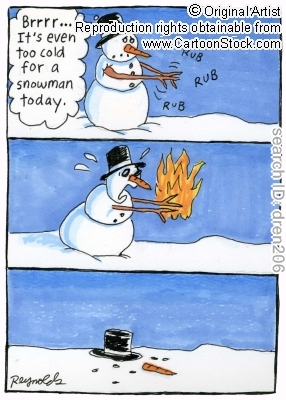 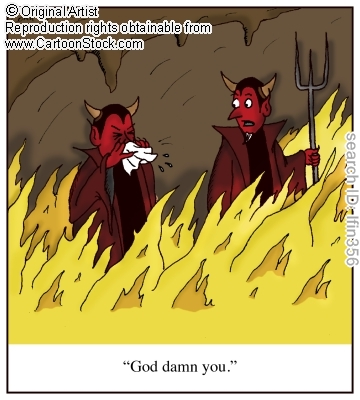 1. On January 31st was the last day of winter "Sales" in Belgium. We only have sales twice a year, one in summer one in winter. So as it was the last day the shops did "sales" on Sales which meant up to (or rather down to) 70 % of the original price. No wonder that everything is so expensive if they still earn something with a 70 % reduction. I thought I'll have a look in my shoeshop and I found what I was looking for since quiet some time,

a pair of little red boots real cute ! I didn't hesitate for one moment, tried them, they fitted, bought them and went home happily ! Rosie agreed to give a little special touch to the picture.

2. The left front wheel of my car was loosing air and I had to get the wheel repaired. As it took 45 min and it was freezing cold (- 6°C, 20 F) with a strong wind, I did some shopping and when I came back the car still wasn't ready. So I put my heavy shopping bag on a pile of stuff and walked through the shop to look at all gadgets which are sold for cars. Meanwhile my car was finished, I payed and went to pick up my car. Suddenly I realized that I had forgotten my shopping bag, went back to pick it up and it had disappeared. In fact the whole pile of stuff which had been in this corner had disappeared too ! I asked and was informed that my bag was in the garbadge, because I had put it in their bin ! A young man went out looked in the bin and came back with my bag ! I can tell you everybody laughed ! These things can only happen to me !

3. For my Yoga classes I badly needed a fleece jacket. I found a very nice red one still on "Sale" bought it and when I came home I thought that I should have bought two because they are so comfortable, light and warm.

4. After Yoga classes the next day I went back to the store to buy a white one but as "Sales" were over I had to pay the full price ! Only 3 € difference but still !

5. Mr. G's collegue in Computer classes, told him "I found your wife on Internet" 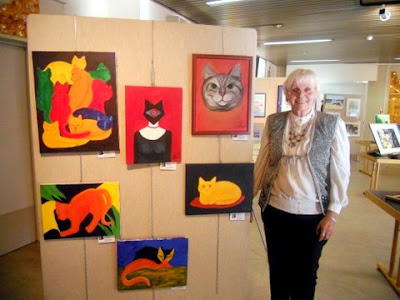 and gave him this picture. It was taken by a Waterloo Artist and published under "Waterloo Artists" what an honnor !
Posted by Gattina at 06:00 11 comments:

EVER MET A KLEPTOMANIAC ?


Wikipedia explains that Kleptomania is an irresistible urge to steal items of trivial value. People with this disorder are compelled to steal things, generally, but not limited to, objects of little or no significant value. Some kleptomaniacs may not even be aware that they have committed the theft (more about kleptomania here)

Long ago when we had often supper invitations or cocktail parties, we were invited by a collegue of Mr. G. for a cocktail party. There were several couples I don't remember, but one was really special. Before they arrived our friend told us to be careful because the wife of P. was a kleptomaniac. I had never heard about this disease, and he explained me, that Nicole stole little things in each house where they were invited. She stole and her husband brought the things back the next day. I found this really funny at that time, because I imagined myself stealing spoons or figurines or whatever and Mr. G. bringing them back the next morning.

This time she stole 2 silver spoons and a little silver plate, which P brought back the same evening, because he had checked his Nicole's purse and had found these things.

She was a very sympathic and beautiful woman, had a lot of charm and nobody ever would have believed that she was a kleptomaniac.

We met her often at suppers, parties or cocktails and I really liked her. And each time it was the same. She stole little things, and once even a perl necklace, and her husband brought all back wherever they were invited. Finally I did like the others, I found it normal, she was like that and that was it.

Fortunately she never stole in a shop only when she was with friends. Hard to explain such a behavior, she consulted psycologists and psychiatrists on her own wish, because she knew what was "wrong" with her, but nobody could help her. So she accepted her disease together with her husband and was even able to make jokes about it !

She was the first and only Kleptomane I ever met. Once in our house she stole a little "bonbonnière" in ceramic (A small, ornate box ) without any value and I hadn't even noticed that it was missing. Next day I got it back from her husband with a twinkle in his eye ! Today I wonder if he didn't find it exciting that he had a "thief" as wife ! 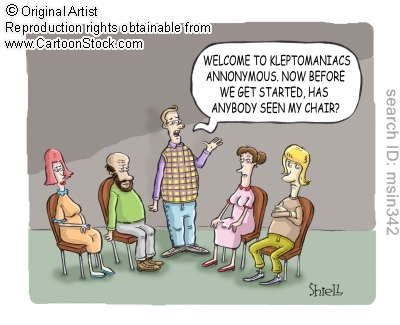 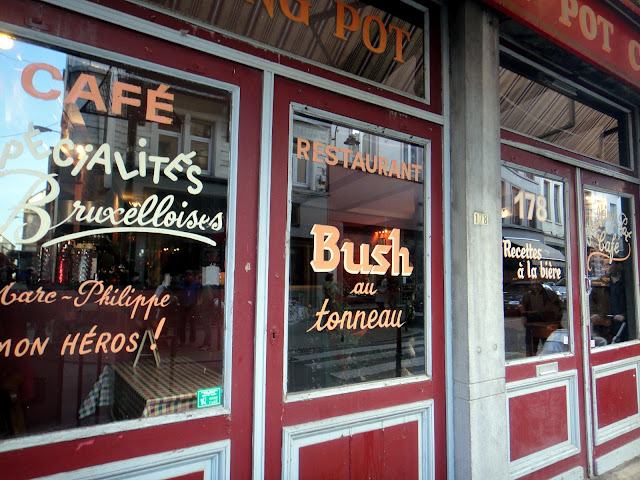 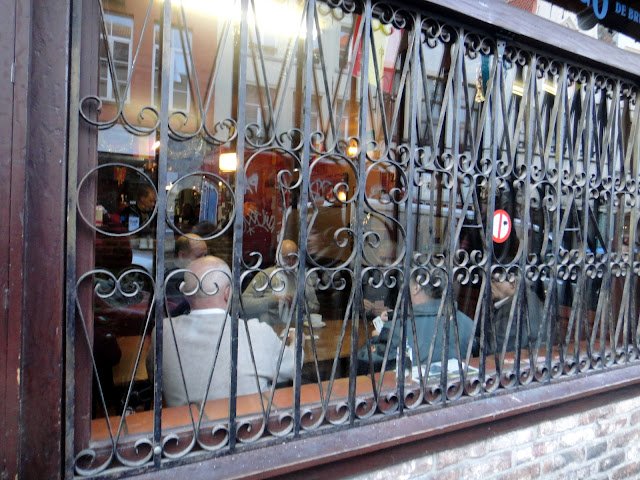 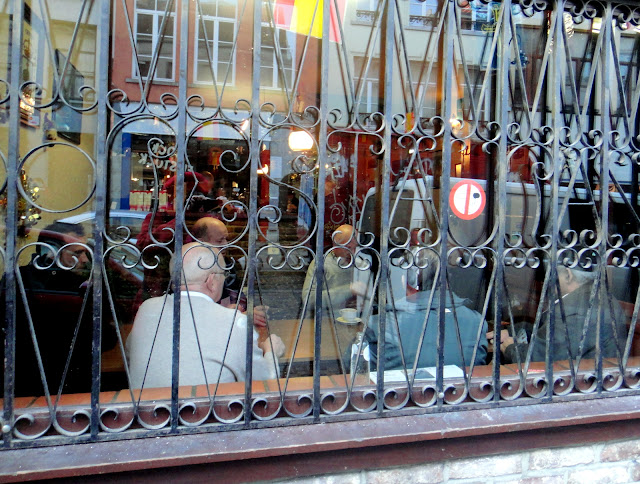 typical Sunday morning in Brussels, playing cards in a Tavern (Café)
Posted by Gattina at 06:00 19 comments:


A different part of my world in our world is going to the theatre especially in winter time. 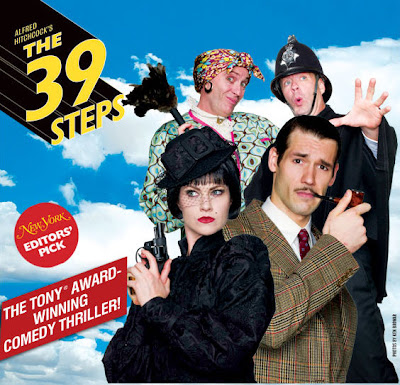 This time I saw the play The 39 steps which also had been adapted as a film by Hitchcock. 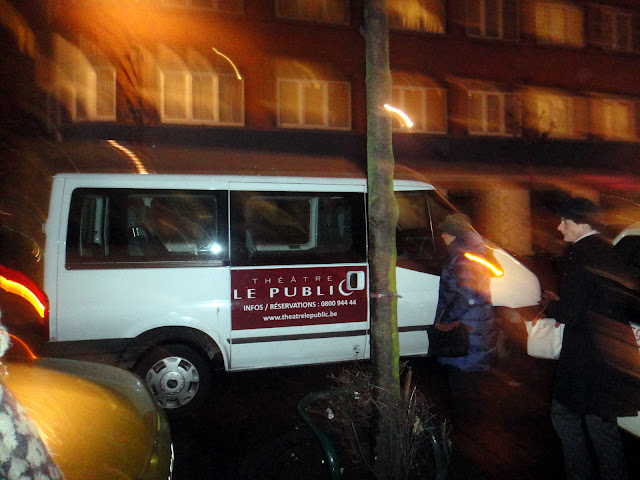 The Theatre called "Le Public" is in Brussels, and because of the lack of parking spaces in front of the theatre a shuttle picked us up outside a car park. 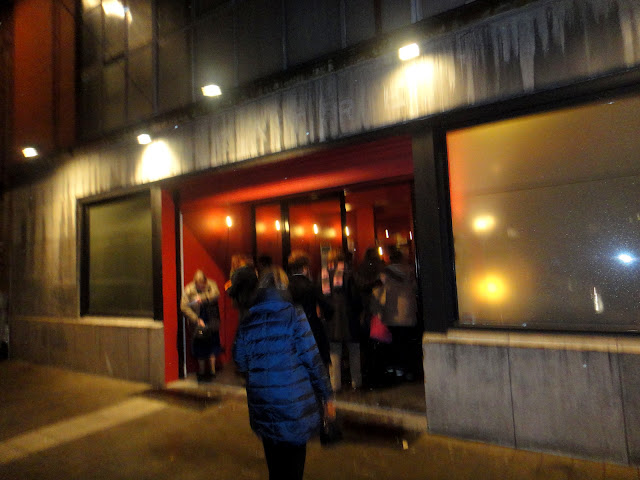 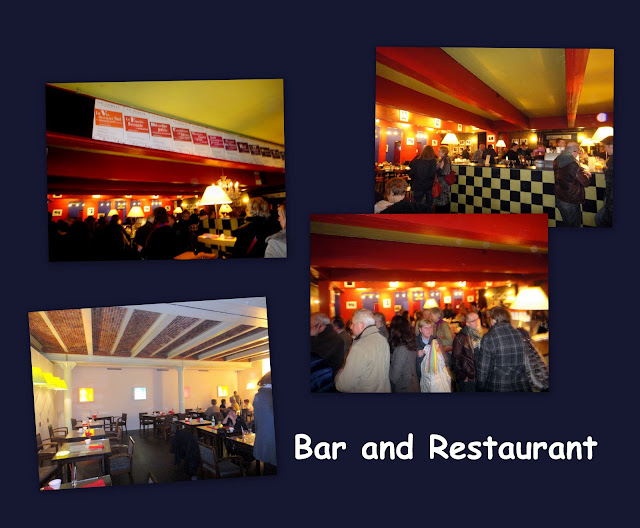 Once inside you have the opportunity to have a glass at the bar or a supper in the restaurant, because you have to go through both on your way to the Theatre hall. I had never been in such a cosy Theatre. Of course you can also eat and drink after the play. 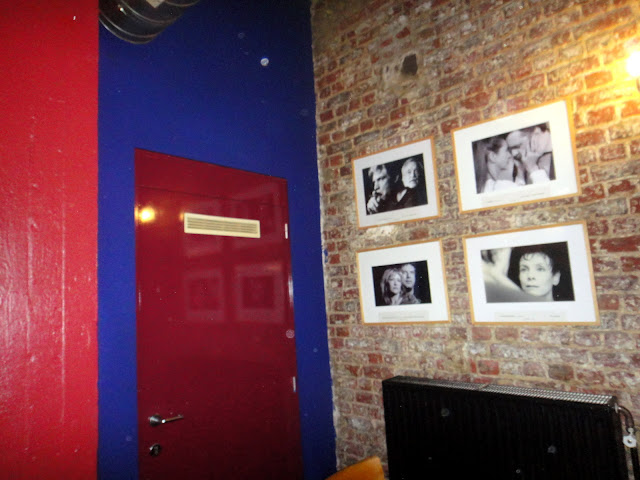 Pictures of actors were hanging on the walls. 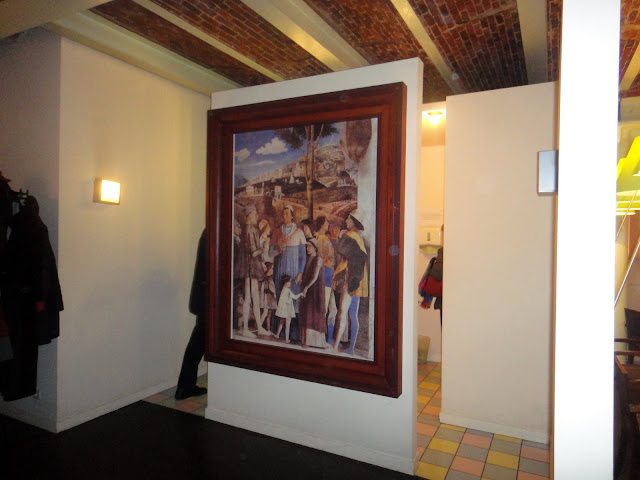 Behind this nice painting was the cloakroom 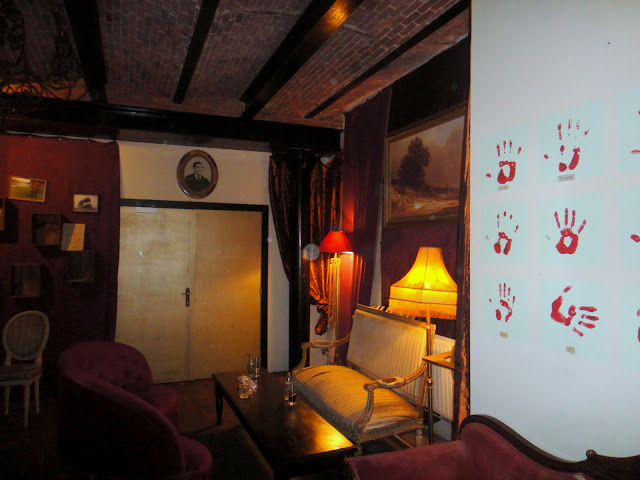 The entrance to the theatre room 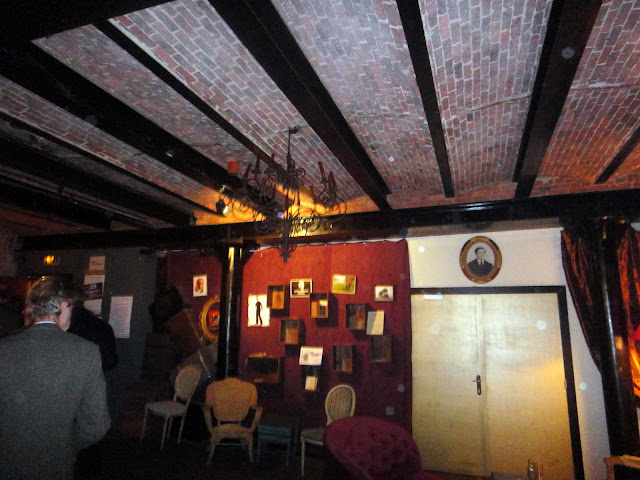 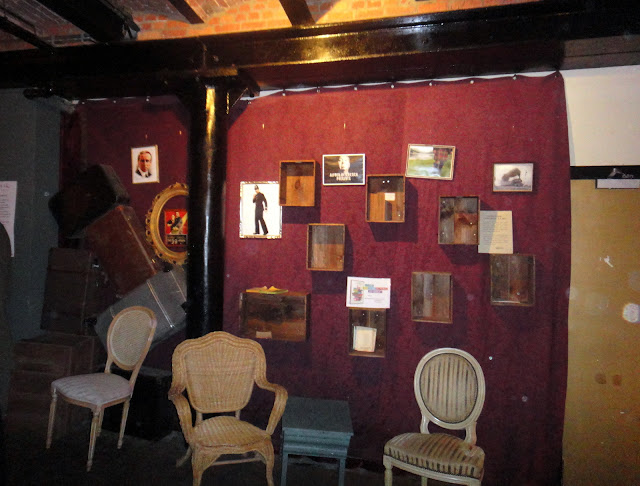 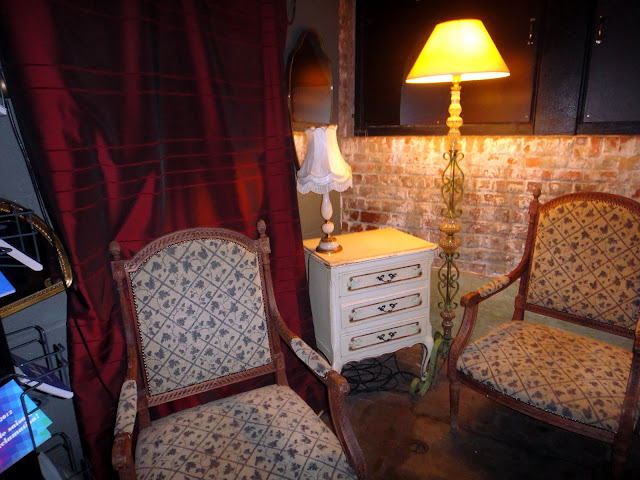 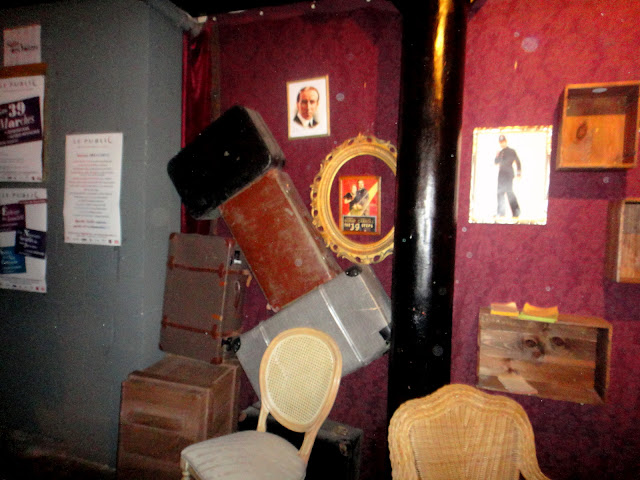 where the decorations for the different plays were standing just there. You can see a pile of suitcases on the left. 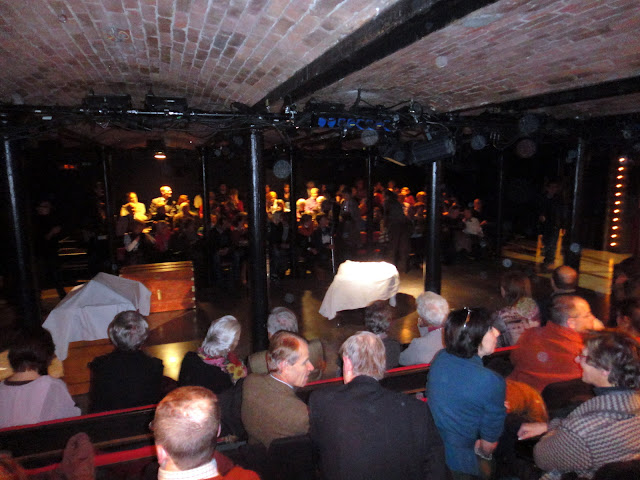 The stage was in the middle and we spectators were sitting all around. The seats were not numbered and I was lucky that we had catched a seat in the last row, because at least we had a nice overlook on the whole stage. The once sitting in the first row had to turn their heads all the time to follow the actions ! 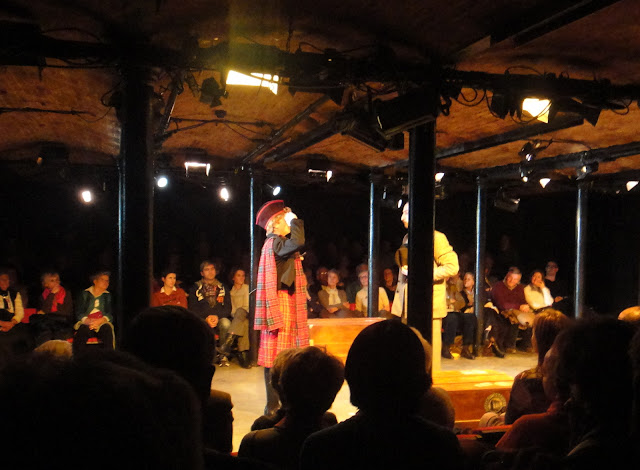 The room had a curved ceiling and was supported by metallic columns fortunately not too large so that they didn't disturb the view. 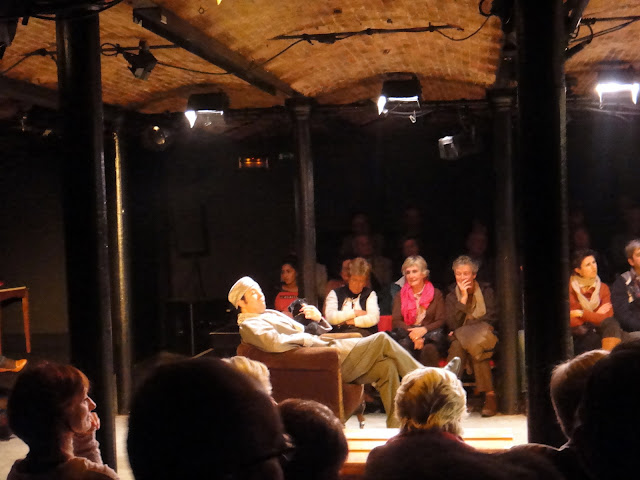 a shot of the play 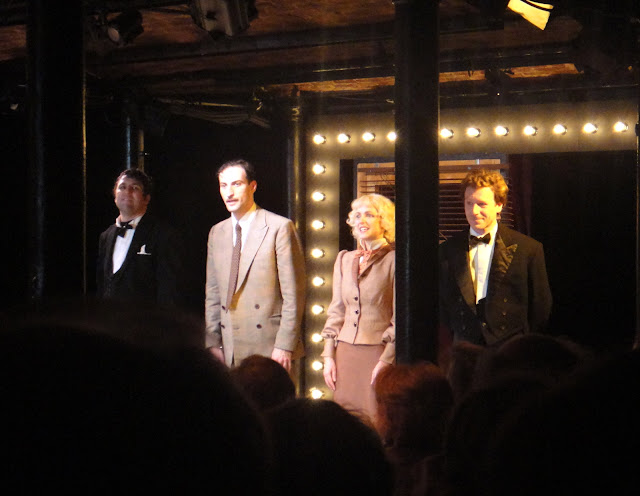 and the 4 actors who kept our attention for 2 h !!

Helps you to remember what you have done on the weekend of January 14, 2012.

Although I nearly always start with a the weather report, which might be boring, but at least next year I can compare ! I am about sure that last year we had a lot of snow and sunshine at this time.

On Saturday a miracle happened and the sun came out, so I "jumped" in my car to go photo hunting. When I am really photo hunting for a special theme, I like to be alone. I was looking for "twigs" (for my next week's Saturday's Photo Hunting theme) When I made the theme list I didn't think about sunshine or not ! My camera filled with twig pictures, I stopped in an electro store and bought a thermometer for my room which is wireless and shows me the inside and outside temperatures. Now I know exactly when I have to have cold and when I should be warm.

In the afternoon I went to my neighbor Vivi who had her 73rd birthday (how time flies by, we know each other when we were respectively 33 and 38 years old !) She has got a WII from her daughter and granddaughter because they had decided that she should move a bit more. Unfortunately I couldn't try it out because they didn't have enough batteries. So she decided to invite us for a WII evening ! I am very curious, because I have never played with it. I have seen on TV that WIIs are installed more and more in retirement homes, to keep the residents active ! When I saw them having such a lot of fun, I found it a very good idea to keep oldies busy ! 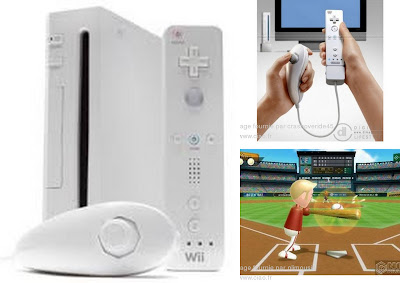 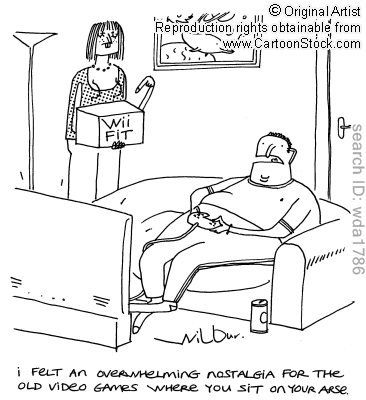 On Sunday winter moved in and for the first time this year I had to take out my winter coat, gloves, scarf and a warm berret, to go to the market ! It was - 2°C (27 F) ! No sunshine but grey and wet.
I wouldn't have gone, but I needed bread and 2 portions of Tartiflette for supper. The guy who sells it does it himself and it is delicious.

The rest of the day I stayed home in the warmth of the hearth and sorted out my pictures !
Posted by Gattina at 06:00 9 comments:

Labels: What did you do this weekend ?
Newer Posts Older Posts Home
Subscribe to: Posts (Atom)