As usual the week started with our Scrabble group. We met at Myriam's, it was warm and sunny and we played on her terrace. And a miracle happened ! When it was my turn I made 72 points at once with the words "sellez" and "salez" ! I was so surprised as were the others that I took a picture, because I think it will never happen again ! And for the first time since we scrabble together I won ! 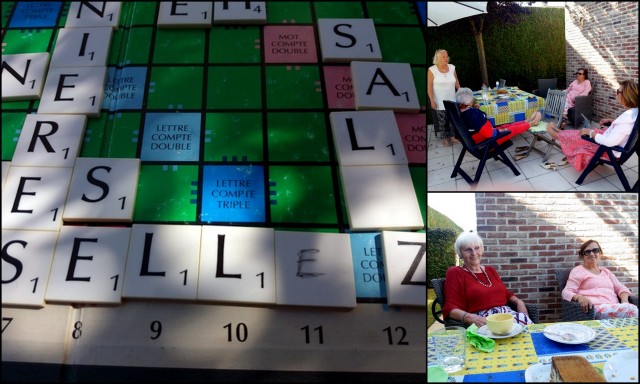 After café and cake, Nicole and Mireille put their feet up, they ankles were so swollen that they didn't fit in the shoes anymore ! We had a nice afternoon !

Sir Arthur my cat had eye problems and I had to go to the vet. Both of us worked hard to get a very reluctant Arthur into the carrier ! We were red like tomatoes from the effort and Arthur protested loudly with his Alfred Hitchcock voice. Once in the car he stopped meowing and settled down. 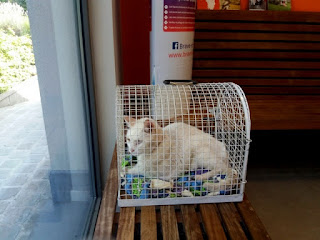 We were too early and we had to wait. I put him in front of the window and he watched what was going on outside. But then when the vet wanted to take him out of the carrier, he refused with his whole body, he suddenly became a wild tiger all claws out and he hissed and  snarled, it was impossible. The vet a young woman, told me that she has to sedate him and that I should come back in two hours. I said good by to the still hissing Arthur and went home. Arthur is 17 and not the youngest anymore. Two hours later he had his eyes cleaned, pulled out two teeth, and had got an antibiotic shot. In the car I let him out of his carrier and he immediately went to the back and looked out, was his old friendly self and happy to ride in a car ! He likes it !

After all these excitements I felt like a rag and collapsed on the sofa and watched TV !

Taking out my passport I stated with horror that it had expired ! I had thought end August, but it had been July. Impossible then to take a plane or the Eurostar to London. I called the German embassy, because I still have a German passport. I think it is easier to talk to Trump then to an employee in this embassy. I wanted a paper attesting that I am allowed to travel, but of course that didn't exist, I should, please fill in all the requested formulars online and not "life" and make an appointment, bring my birth certificate. I told her that since 60 years they have made a passport for me they should know that I am born and still alive, and that the certificate must be with them. She insisted that  rules are the rules and I had to bring this certificate, and if I don't find it ask my parents (???) unfortunately that made me laugh and I told her that my parents were dead since a long time otherwise they would be in the Guiness book of record. The frustrated lady didn't appreciate at all my humour and finally I gave up it was just useless. The appointment I had to make online. the first available date was in September (!!) and then I had to wait for a new passport for 6 to 8 weeks. Fortunately I can travel by car or train with my identity card.

As officially our painting class is on school holidays some of us have decided not to follow the kids but continuing the class. 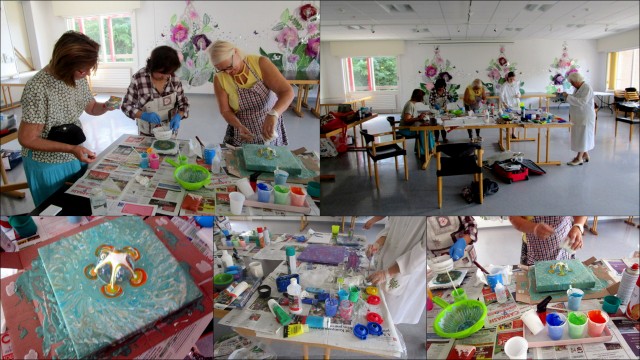 and what fun we had ! We tried out abstract painting, which is called "pouring" and in short it is a technique where you mix colors with glue, put them all together and pour them on a canvas ! The result is amazing and never the same. We all were very satisfied with the results.

To end the week we went for lunch together in a big "all you can eat" Chinese restaurant and when I came out of there I thought I will never eat in my life again ! The others felt the same and we all returned home for a little or big rest !!

Only 15 km from Krakow our bus drove us to the Wieliczka Salt Mine one of the oldest in the world built in the 13th century continuing table salt production right up until 2007, making it one of the world's oldest operating salt mines. Today salt is no longer mined in Wieliczka, but this original underground complex is preserved in a great condition, making it a world-class monument. Wieliczka Salt Mine was recognised in the UNESCO’s World Cultural and Natural Heritage List due to its breathtaking underground chambers carved entirely in salt......

Linking to One Liner Wednesday
Posted by Gattina at 08:48 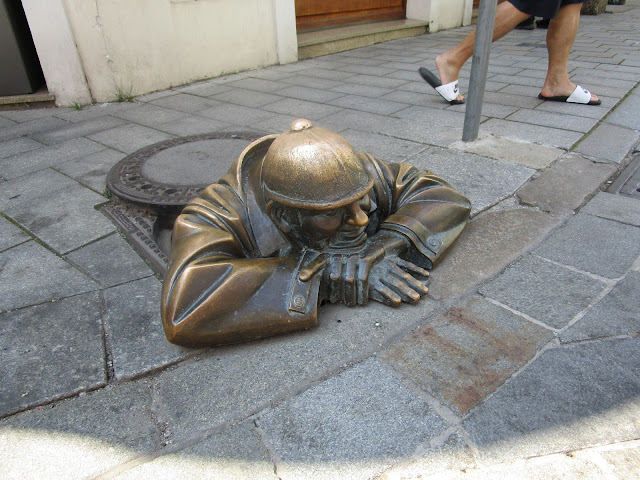 Suddenly somebody crawling out of a drain in Bratislava (Slovakia) 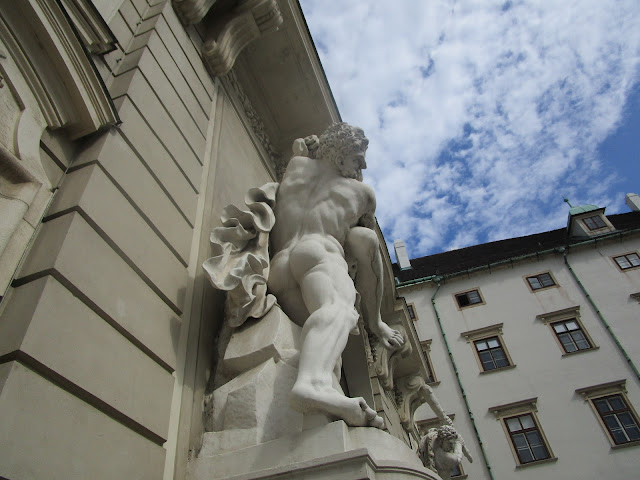 more participants here
and Image-in-ing
Posted by Gattina at 07:00 8 comments:

Graz is the capital of Styria (Steiermark) and the second largest city of Austria with a population of just below 300,000 - about 40,000 of which are students of its six universities. 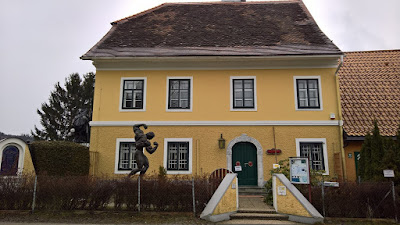 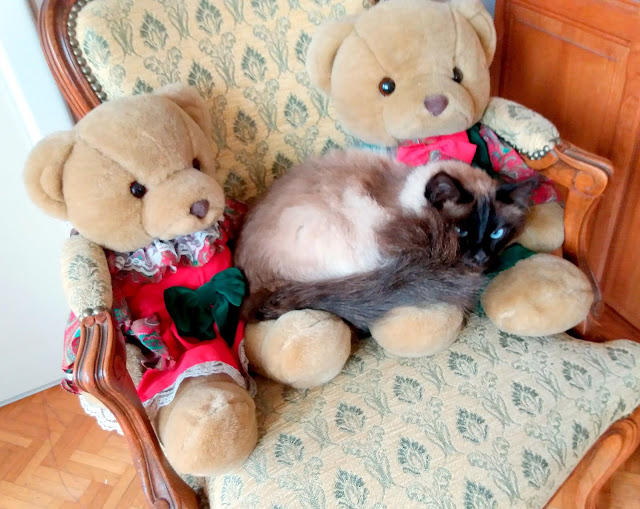 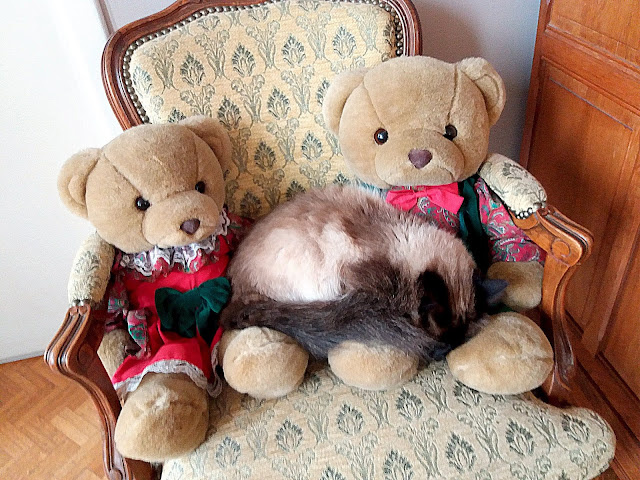 
What a boring weekend ! The temperatures dropped by half from 40°C to 20 and it rained cats and dogs, which maybe is good for farmers and gardens, but not for me ! Last week I was locked inside because of the heat, this weekend I was locked in because of the rain and real stormy weather.

I tried to sort out the pictures of my tour, there are some left, which I really don't know (yet) to which city they belong, as the architecture is so similar. I also did the laundry and then I was fed up and went with my neighbor to the cinema to cheer us up and we watched 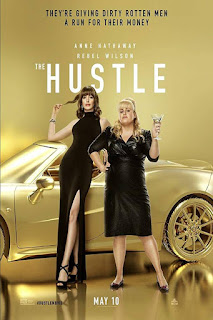 It was just something to laugh, which we both needed, she was home because of terrible back aches and couldn't work. She is a nurse ! Not an easy job. But armed with two enormous portions of pop corn, we enjoyed the film !

On Sunday I wanted to go to an Indian Festival, with food stands and shows, but it was cancelled due to the bad weather and I stayed home. Mr. G. squatted the TV with his Formular 1 thing and I surfed a bit the net for get aways ! Finally I ask myself if I had not a gipsy somwhere amongst my ancestors, because I am like a fish in the water when I can travel and see other things, then my neighbor's house ! Well I have to be patient for a while, at least this afternoon there is our weekly scrabble ! 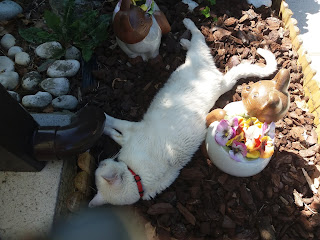 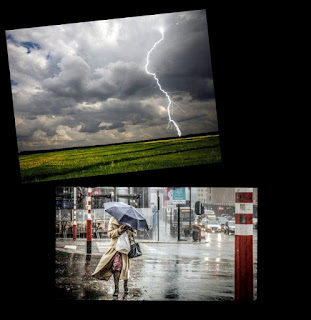 A DIRTY OR A CLEAN TOWN ?

During my tour through 8 Eastern countries, I was quite surprised when we visited Ljubliana in Slovenia ! I had never seen so many graffiti in my whole life, which covered nearly all houses and buildings. But it didn't look dirty at all, it was mostly real art and expressed what people had to say since the communists had left and now they had their "Freedom of Speech" ! 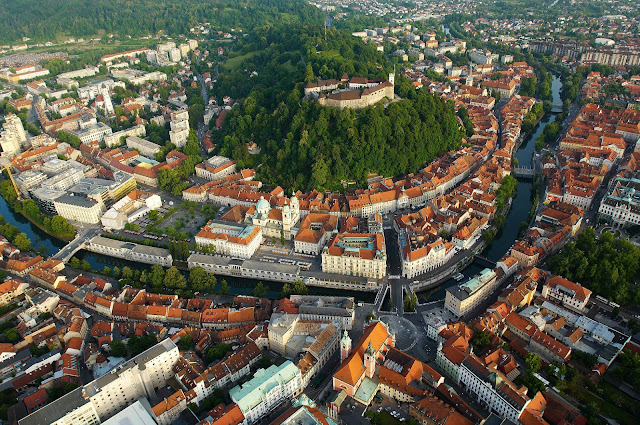 This photo from Internet gives a nice overview of the city


Linking to SOCS Linda G.Hill
Posted by Gattina at 12:49