1. My car celebrated its first anniversary and I had an appointment with the Garage for the very first check up. 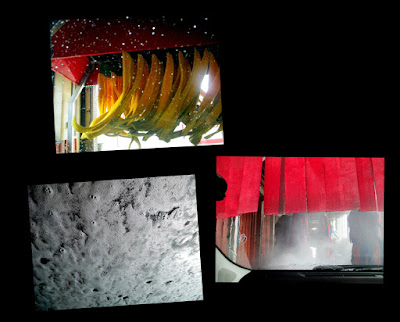 For this reason I went through the car wash and while I went through I took some pictures, always thinking of a photo theme. At home I also cleaned the inside and thought that this was enough physical exercise for the day.

Then I took my car to the Toyota Garage for the check up and while it was done, I walked over to Nicole who lives nearby for a cup of coffee. Charlie her dog thought I would have brought him a bone again, and sniffed and sniffed at my purse until I opened it to show him that there was nothing interesting for him inside, he was very disappointed ! 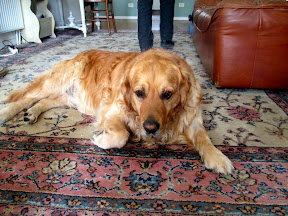 2. My cat Kim who hates to be brushed and runs away when she only sees one (even holding it behind your back) was full of knots and I had to take her to the groomer. 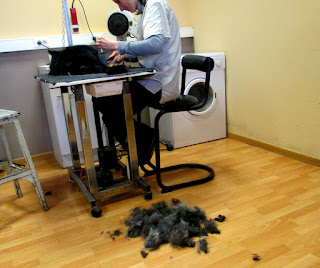 Catching and putting her in the carrier is exhausting ! And listen to her meow concert in the car too ! I arrived there as a wreck and fell on the next chair. This cat is a real hypocrite, while at home she makes such a fuss, at the groomer as soon as she was sitting on the table she purred and made pasta with her paws, in short the happiest cat of the world !

3. I got a phone call from my oldest friend, we know each other since we were 8, and she talked non stop for an hour from Germany, I couldn't place a word sometimes I tried to interrupt her but no way she didn't even listen. Finally I put the phone on the kitchen table, cleaned the kitchen, went with the phone to our front yard and pulled out some weeds growing in the gravel until finally she asked me what news I had ! We agreed on a meeting in a near future !

4. My inside/outside thermometer didn't show the outside temperature anymore and I had thought the outside box had been stolen.  I had ordered a new one on internet a month ago, which hasn't arrived yet.

When I saw one on promotion in a shop for a very good price I bought it.  I  installed the outside box in the hedge of the front yard, and found the box of the old one ! We had both looked at the wrong place ! Now we will have 3 when the Internet shopping arrives and then with 3 thermometers I certainly will know the outside temperature and how to dress ! 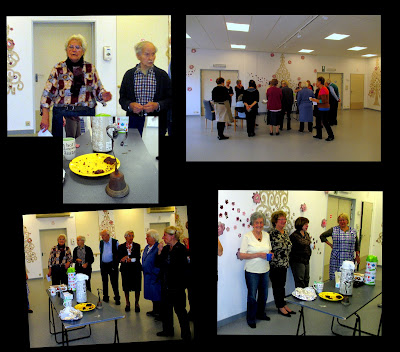 Next weekend we will have our yearly painting exhibition. A last briefing took place and we all gathered around the coffee pots and cakes and cookies. Our "administrator", (on the picture at the top left) a former teacher to make us listening to what she already shouted, had taken a bell with her and each time someone chatted, she rang the bell. We had a lot of fun because she still behaves like an old teacher and treats us as if we were all 6 years old. I brought her a stick, in case one of the little pupils were not behaving. We ended our meeting with hurting bellies so much we had laughed !

For educational purposes, my father had decided that I have to buy my first car myself with my self earned money. Of course he would take care of all the rest what this vehicle would cost. Anyway with or without permission I had decided that I must have a car. I was 21 and wanted to be free and drive around depending on nobody, which was quite unusual in the 60th. My girlfriends were rather looking for the love of their life and marriage.

Learning driving was an easy thing in the 60th in Belgium, no driver licence was requested.  In order not to damage his precious car, my father hired a guy who taught me driving in his car which had two steering wheels and breaks. I learned very quick, as it was something which I wanted absolutely and as soon as possible.

When I was ready, I looked in the papers for used cars. And I found one ! A Fiat 600, in white ! I bought it right away. Now I was the proud owner of my very first own vehicle ! 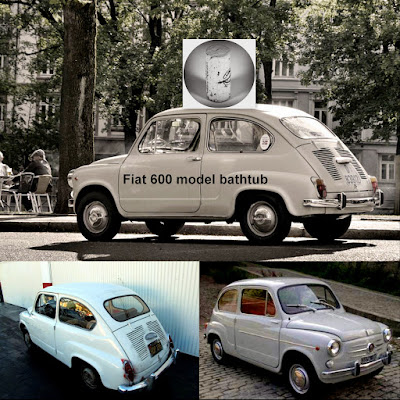 It was a special car ! When it rained I had water on the floor until my ankle. So I always had boots in my car, until a friend had the very good idea to bore a hole in the floor and then closed it with a cork. This was a perfect solution. When water started to get into the car, I just took off the cork, let the water run out and then closed it again. We called my car "Model Bathtub".

I had no other problems with my little car, until the day when I drove behind a truck which spat drops all over my vehicle. Of course I thought it was water, but unfortunately it wasn't. It was acid ! When I came home I saw little holes all over the car body. On the roof, in the front and in the back. What to do now ? I found an easy solution. I bought a can of white color and a brush and painted my car myself all over. It didn't look very nice, I had bought an opaque color, and the car didn't shine anymore, but at least the holes were gone.

My father was very upset about the look of the car and what people would think of him to let his daughter driving around in such an old and awful looking vehicle. He took the opportunity to propose me a deal. I should split with my boyfriend, whom he didn't like and whom he thought was not good enough for me and as consolation he would buy me a new Volkswagen. That was a deal !

What did I do hating blackmailing ? I accepted, got my new Volkswagen, kept my boyfriend of course, but a little more discretely. Everybody knew that, except dear father. I felt very good ! A few month later I anyway split with my boyfriend, but at least I had my car !

The new Volkswagen was very beautiful, but it was not the same, it looked too normal, not at all like  my little old self painted vehicle. 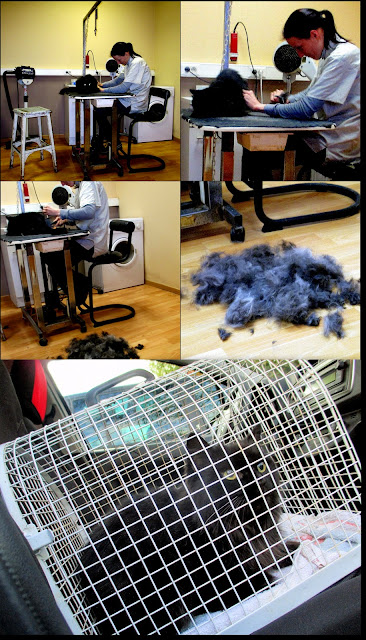 TITANIC THE ARTIFACT EXHIBITION IN BRUSSELS

Together with two friends we finally managed to visit the Titanic Artifact Exhibition, which is already since May in Brussels. It had such a lot of success that it was prolonged until November 31. It was not allowed to take pictures, but somehow I managed not using my flash, when the guardian was not in sight.

When did the great ship exactly sink? On April 14, 1912, at 11:40 pm  sharp, the Titanic collided with an iceberg. Only 2 hours and 40 minutes later the ship had perished and sunk to the bottom of the ocean.

The expo hall in Brussels (Heysel) 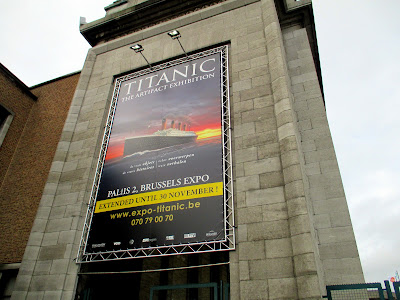 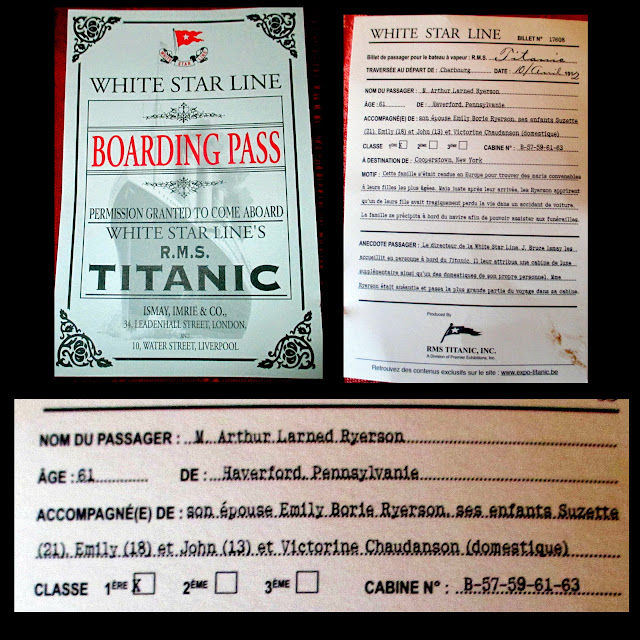 At the entrance I got this copy of a  boarding pass. It was on the name of a certain Arthur Larned Ryerson who travelled with his wife, 3 children and a maid. It was a strange feeling. 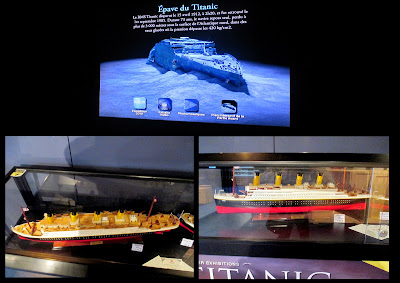 a picture of the sunken ship and two replicas 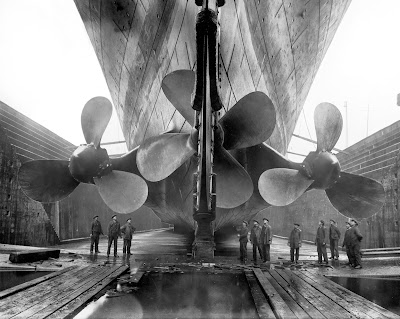 This photo shows how big the Titanic was, 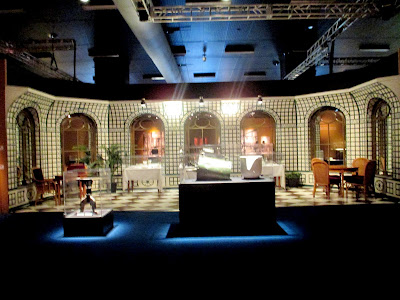 One of the various sitting rooms 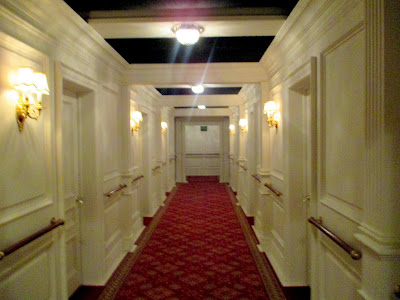 The corridor leading to the first class cabins 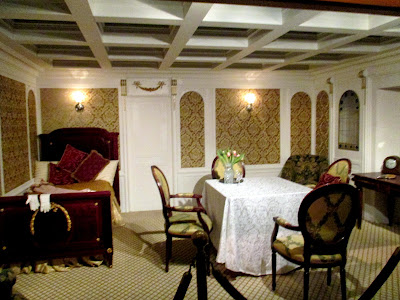 3rd class cabin. Apparently compared to other shipping companies, they were quite nice and comfortable

In showcases we could see the items which had been saved and brought up from the depth of the ocean ground. 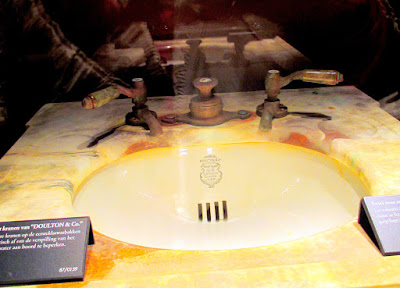 a wash basin in porcelain already with a water mixer 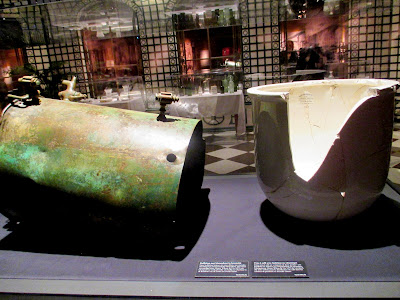 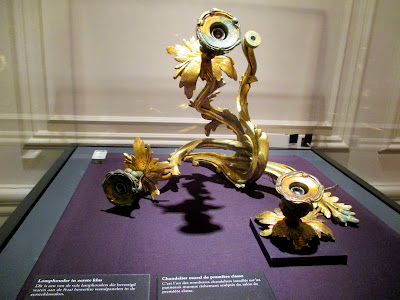 One of the candle holders 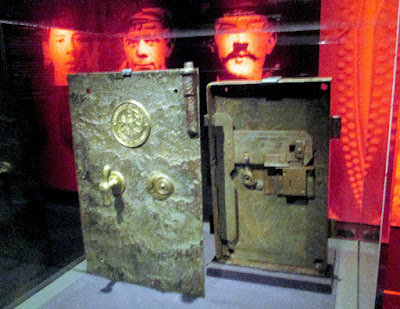 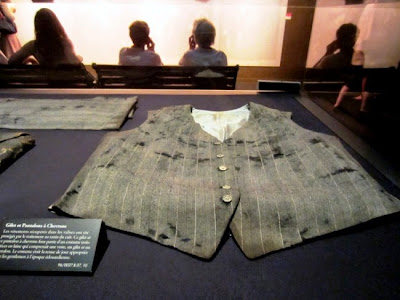 A vest of a suit which was surprisingly so well conserved

as well as a chef's cap if you think that both were laying in salt water for 102 years, probably well protected in a drawer or suitcase. 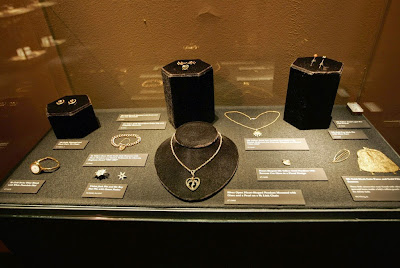 There was not a lot of jewellery on display, which surprised me, as I know that the ladies from the first class were decorated like Christmas trees for supper. 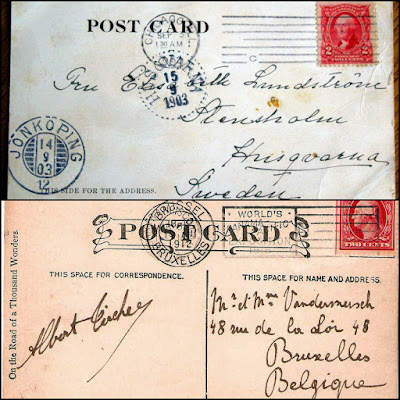 There were also well conserved postcards, here one destined for Sweden and one for Belgium. There were many other items, but I couldn't take pictures. 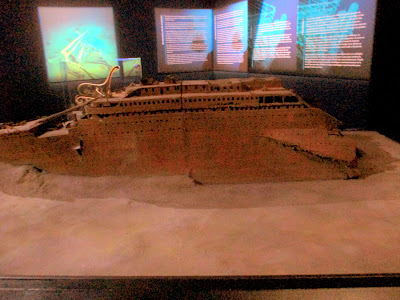 A picture of the wreck, how it looks today 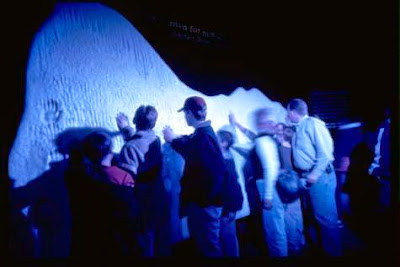 The saddest item was an iceberg in real ice so that you could feel the cold, with prints and scratches of desperate people who tried to find something to hold on. 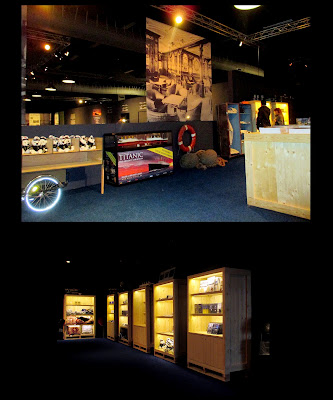 At the exit was a souvenir shop ! Not many people in there. Who wants to wear a Titanic T-shirt or drink out of a cup with the sunken ship ?

MY WEEKEND OF OCTOBER 11

On Saturday afternoon we celebrated our 45th wedding anniversary 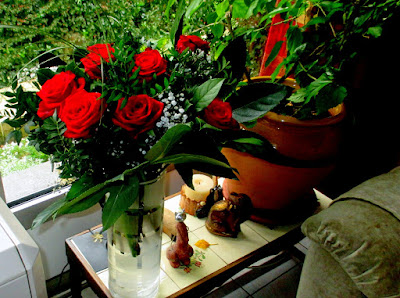 First thing in the morning I got this beautiful rose bouquet from Mr. G.

I wanted to invite our friends who are still married and found only one couple ! All the others are divorced since ages or after 35 years of marriage ! So we invited Mr. G's friend and ancient colleague with his wife. He is Belgian and she is German and they are married since 53 years !

Apparently we are the kind of species who are dying out ! 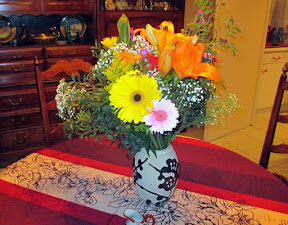 They brought us this beautiful bouquet. 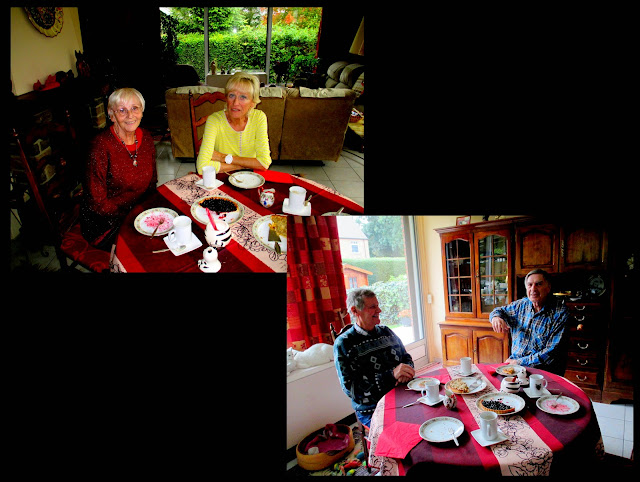 With first coffee and cake we celebrated and talked about old times and what we had all done together as young married couples ! We had a lot of fun.

After the coffee late afternoon, we had a bottle of Champagne and continued our memories. It was a real nice afternoon. 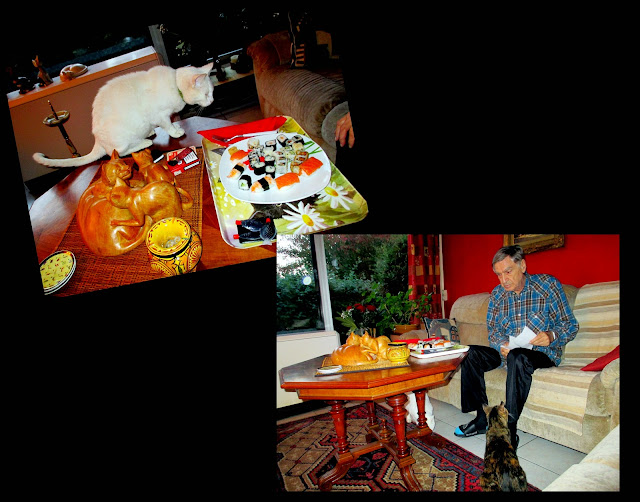 The day ended with a Sushi meal, which is our favorite plate for special occasions. Cat Arthur was very interested and Mr. G had to share his Sushis with him and Pookie. Fortunately there were enough !

On Sunday Nicole came with Charlie, and we did a little walk with him here around 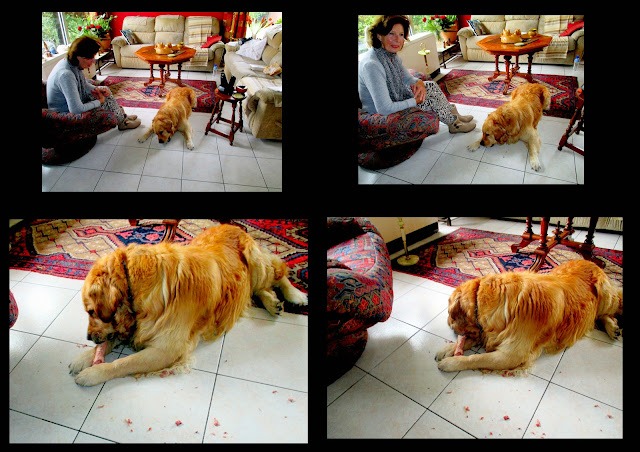 And then had a coffee. Mr. G had been on the market and had brought a bone for Charlie
was he happy ! He ate it all in no time and even leaked the crumbs from the floor ! 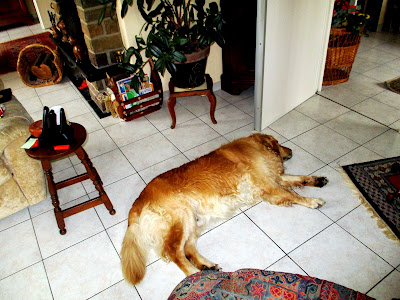 Then he collapsed happily, while we continued our chats.