If ever you feel that your legs and feet need a thoroughly cleaning, and you have nothing to do over the weekend, then go to Dr. Fish SPA. You hang your legs in a bassin and little sweet fishes will nibble at your legs and feet and eat up everything which doesn't belong on a smooth leg skin, except probably the hairs which you should shave off before. I doubt that the fishes eat hairs, but I am not sure.

I have seen this in Eastbourne on the Pier, there was a beauty shop which did such a treatment. I could take the pictures through the window, as the two women were so busy with chatting that they didn't even see me.

I have to admit that I prefered to save the 10 £ for 10 min fish feeding. I mean if I feed already the fishes with my skin it should be free because I make the fishes happy !

Somehow it reminded me the use of bloodsuckers which centuries ago were put on people for all kind of diseases and apparently this treatment comes back too.

1. Since I am back from my holidays in England, it seems to me that all days are the same. Nothing happens and there is nothing special to do either because the weather is so bad.

2. I did the rest of the house cleaning, what an interesting subject ! Fortunately I had still a lot to do with my photos.

3. My painting class is closed for "school holidays" until mid September. I am angry because we are all retired and have nothing to do with school holidays. But part of my classmates are busy with their grandchildren as school is closed and the parents working. The other part is on holidays.

4. Acqua Gym is the same, our Monday group is cancelled and there is a course on Tuesdays with other people. Fortunately there is still Dominique who shares the same problem with me.

5. In fact it is like each year, during July and August the school holidays, Belgium is dead. Companies, and boutiques are closed for at least 3 weeks. The streets are empty, which is nice, but lots of houses too and the burglars have a happy time.

To resume my week I just did nothing special and nothing happened either not even Mr. G. falling out of his bed. 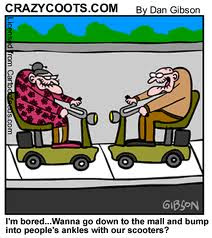 I think I will end up with doing the same !

The letter Q in French is the favorite letter for kids, because the pronunciation is "cul" like ass. Sorry I don't want to be rude but it is the truth. Q in English could also mean a queue, which means "tail" in French. In German the Q is pronouced Kuh, which means a cow. So there is quiet a variety in the Q's pronounciation.

So why do we write queue if we could just write q, or the french q instead of cul (ass) and Q instead of Kuh (cow) it would be much shorter.

And this post is the proof that quality goes over quantity, I mean it's short. 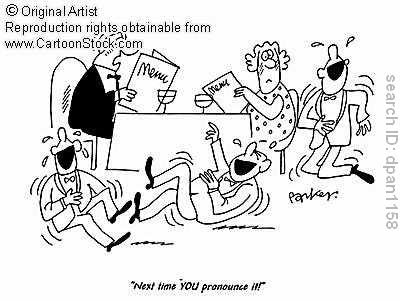 Next time you pronounce it 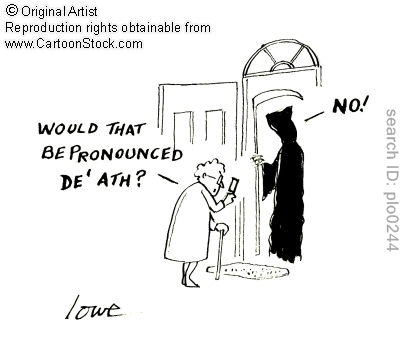 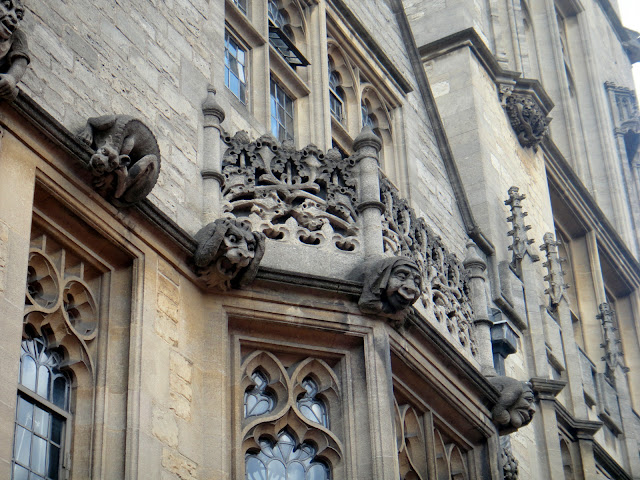 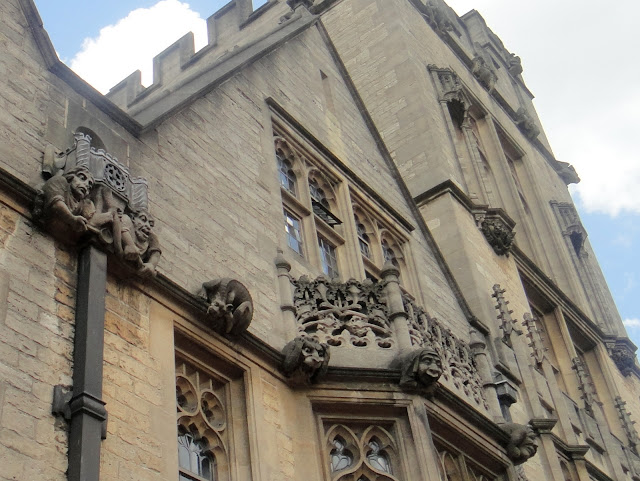 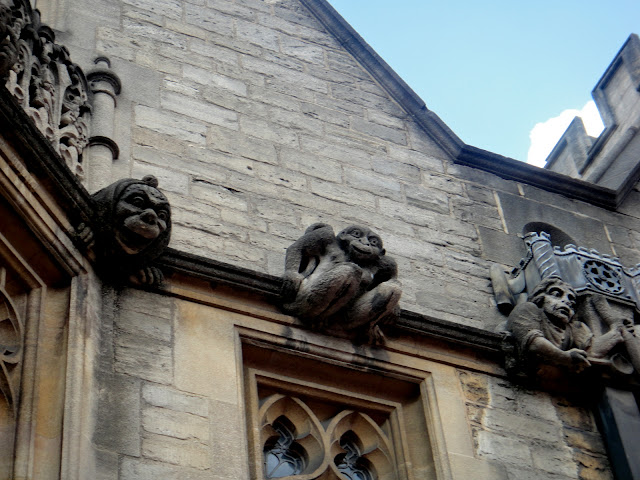 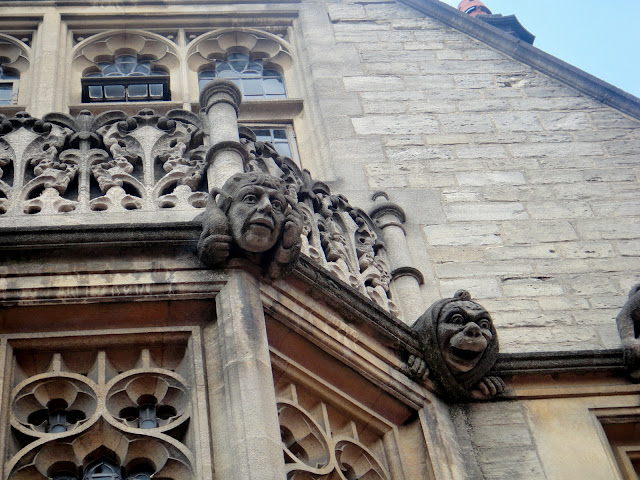 rather strange Gargoyles sculptures on a College in Oxford

THE LONG MAN AND PEACEHAVEN

Helps you to remember what you have done on the weekend of August 6. You never know if you need an alibi ! If you participate please put the little logo on the top of your post and leave your link.


What an exciting weekend ! As I came back from the UK on Thursday evening, there was quiet a lot to do in the household. Not that Mr. G. has behaved like a pig, but still there are things men just don't see or they just want to be blind.

Anyway I had to do laundry, that's not a big job in itself because I could chat on the phone during that time for example, but what always bothers me is to fold the whole stuff and put it away. People walk on the moon but are not able to invent a machine which puts clothes in wardrobes. It's a shame.

Besides that, there was also the grass which was so kind to grow during my absence and which Mr. G. couldn't mow because it had rained all the time and anyway he has difficulties to do it even when it's dry weather. As we have no goats and the cats don't eat enough grass, I mowed the lawn and had just finished when it started to rain again. 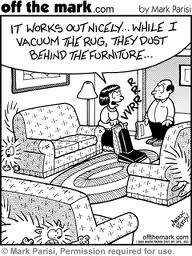 Sunday the day where you should rest, I cleaned the house, my cleaning lady is still on holidays. Never mind I also survived to that. The rest of the weekend I spent with blogging and still sorting out all my pictures. My camera got problems fortunately only the last two days of my holidays in Oxford and produced photos with stripes ! As I am against modern Art, it has to be repaired and I am without it for at least two weeks. I hope my spare camera will work well.

After supper Dominique came over for a "Midsomer Murder" evening, and instead of popcorn we had fresh strawberries which we enjoyed while Inspector Barnaby was solving 7 murders, according to Mr. G. who is our "crime" accountant. As in the last film there were only 2 murders, the average of 4 will be kept. 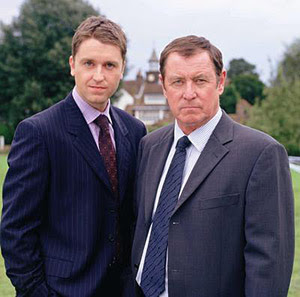 ON TRACK OF INSPECTOR MORSE 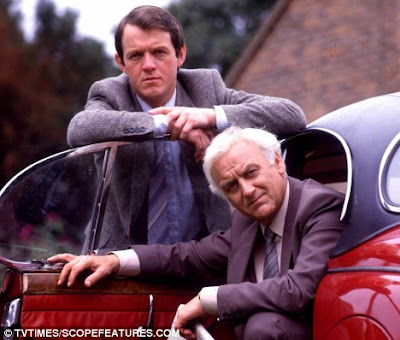 I love watching British crime stories and had recently discovered Inspector Morse who is so famous that he is even mentioned in Wikipedia here. Although the series date from 1987 on, I only saw the first Morse film on TV last year ! Apparently it took a long time to make him speak French, or maybe the French and Belgian TV had not enough money to buy these series earlier. Never mind, I started to like Inspector Morse and his assistant Lewis.

Unfortunately I missed the "Morse" tour organized in Oxford on Mondays and Fridays, where crime scenes are shown and also his famous red Jaguar. So I tried to find him on my own and next time when a French speaking Morse is on TV I can unnerve Mr. G. by exclaiming "I have been there" all the time.

The hotel where he used to have his beers or stronger drinks was just around the corner (or nearly) of the Balliol College where I stayed.

It looked very posh and beautiful.

I also took my "posh" look and stepped inside armed with my little camera to take some pictures of the place.

Immediately a uniformed person asked me "May I help you Madam", I said yes, I have an appointment with Inspector Morse. He smiled and showed me the way ....

Unfortunately he wasn't there, probably hunting murderers. So I decided to come back another day ... But before I left I had a look into the other rooms.

the entrance (my camera started to get moody and made stripes)

and the staircase up to the rooms.

It was interesting to see and this evening we will watch a Morse film which Mr. G. has recorded during my absence. No murder happened during my stay in Oxford.
Posted by Gattina at 06:00 9 comments: