When I read the prompt of this week "Choose a word or words with the letters “mem” in that order and run with it. Enjoy!" I didn't enjoy, I googled what "mem" means ! and I learned a lot again !!

Not only is Mem believed to derive from the Egyptian hieroglyphic symbol for water, but also the thirteenth letter of the Semitic abjads, including Phoenician mem Hebrew Mem, and Aramaic Mem ! Did you know that ??? I didn't ! I felt like "Back to school"and my general knowledge once again enlarged !

But mem written in capitals is also the abbreviation of "The Master of Engineering Management (MEM) which is a professional degree program offered by Thayer School of Engineering at Dartmouth in conjunction with Tuck School of Business. Being more artistic than interested in engineering, I extended my researches and learned that the Memphis airport is also called "MEM". The only thing in Memphis which had interested me was the home of Elvis and his airplane, but not the Memphis airport, because we had arrived by car.

After these highly scientifical researches, I read the prompt again and realized that I had misunderstood ! Stupid girl I told myself, next time read twice don't forget that you were 16 when you learned English and not at one or two years like the anglophones !

The only word which came now in to my mind was Mem/phis, because I had just written the word.
But before I start all over again, and I don't want to bore you to death with words like dismembers, enthymemes, homemakers, and immemorial taken out of Wordfind for crosswords, I leave my entry for this "meme" like it is !

1. The weeks started with rain and rather very cold weather. I time to see all in black ! 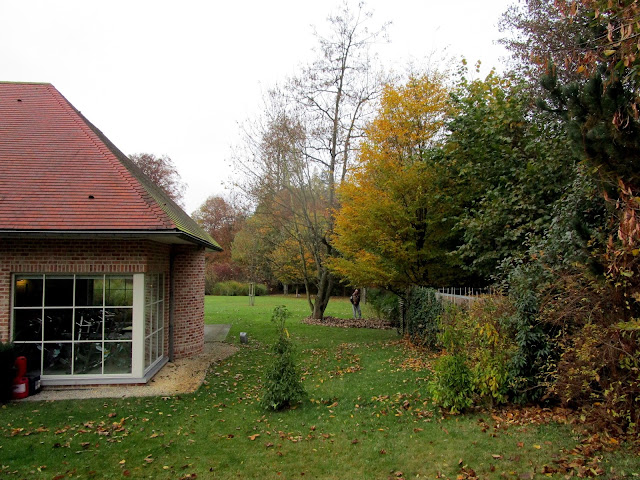 When I arrived at my aqua gym, the gardener was just vacuuming the leaves from the grass ! The trees had very much strip teased. It was a nice morning as usual and in the afternoon, I stayed home in the warmth while outside it rained and the wind was blowing around the house !

2. Nicole's kitchen is now ready to be "filled in" but she hadn't done it yet. I went to Nicole whose living room was in a mess, a cat wouldn't have found her kitten in this room, but we were sitting there chatting drinking coffee and eating a waffel and it was really cosy. We both noticed how nice it was that nobody makes remarks about your being messy !  I personally prefer to sit in a room which doesn't look like a furniture catalogue. That doesn't mean that my cats wouldn't find their kittens !  Unfortunately I forgot to take a picture, because we both had to laugh as Charlie (the dog)tried to find his way through all the books and items laying on the floor. 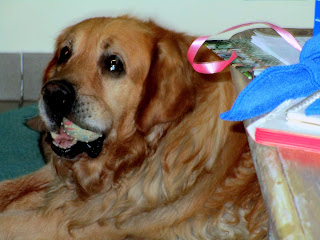 3. I was not really out of my bed when Mr. G. arrived and asked me "You know who won the elections", I yawned and said, "Hillary of course" and he : noooo it's Trump ! Fortunately I sat how was that possible ?? I had family in the States, I had been there so very often I had assisted to this unbelievable election circus but never had thought that Trump would win !!

I immediately looked what the press said. I have the advantage that I can make my own opinion by reading the French, German and English newspapers. Sometimes there are differences but this time they all agreed !  The English Newspaper wrote :

"Donald Trump wins: Republican candidate and reality TV star becomes 45th US president"
The most unlikely candidate to contest the US election has won the battle for the White House. Donald Trump, the 70-year-old New York tycoon previously best known around the world as the host of a celebrity TV show, is to become the 45th President"

and then I found other things, which maybe should have been known before ! He already had his plans in 1998 ! And has not a very nice opinion about the Republicans. 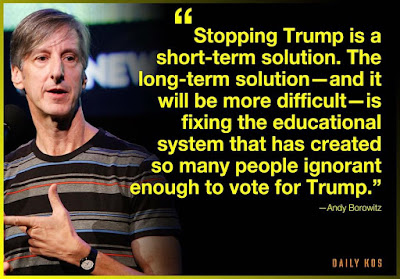 I  liked this saying very much.

I heard that the Canadian Immigration website had crashed, because too many Americans wanted to immigrate to Canada !  It was like after the Brexit vote when British people wanted to stay in an European country.

3. The whole day on TV and in the Radio (when I was in the car) they talked about Trump ! and how is it possible that Hillary Clinton had more voices than Trump has lost ? Specialists, analysers etc tried  to explain.

4. In my painting course we just discussed a bit about this event, not too much, and then we returned to other more funny discussions. 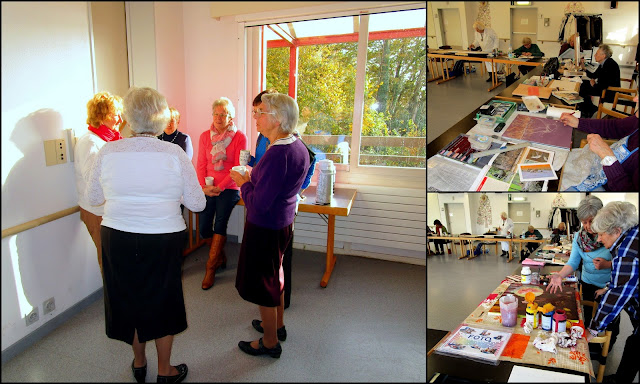 The coffee break and working "hard"

5. One of our aldermen had seen in Berlin a refrigerator for the poor and homeless, which is filled in by everybody who wants to help them. 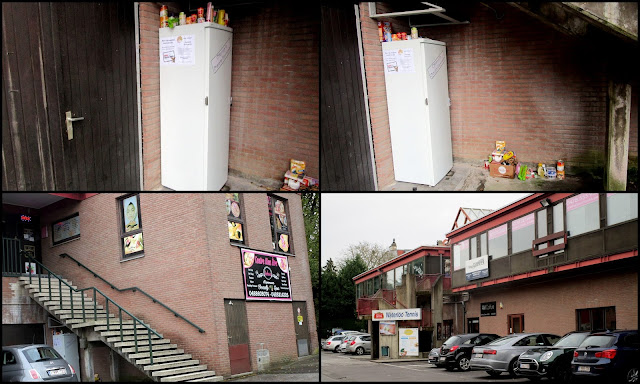 After some discussions with the responsible people, Waterloo Tennis allowed him to install a fridge under the stairs in a discreet place. Volunteers take care of clean it and take out if something is not good anymore. I wanted to see that too, and bought some soup in cans, noodles and apples and put it aside of the fridge. We need a little table or shelve for can food. I also saw that people had brought soap and shampoo, baby things and even cat and dog food.

I returned home feeling good, I thought at least not all people are bad ! 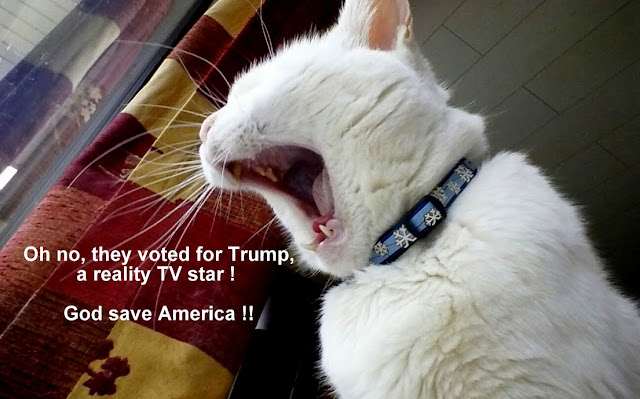 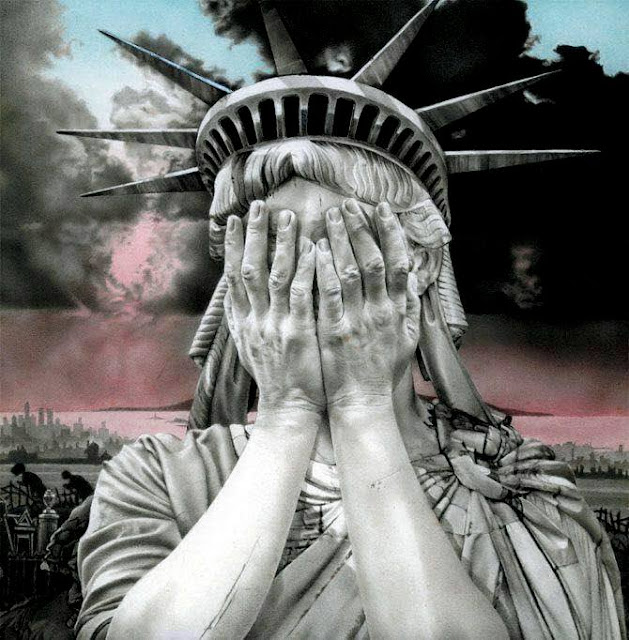 The result concerns us all !
Posted by Gattina at 07:00 4 comments: 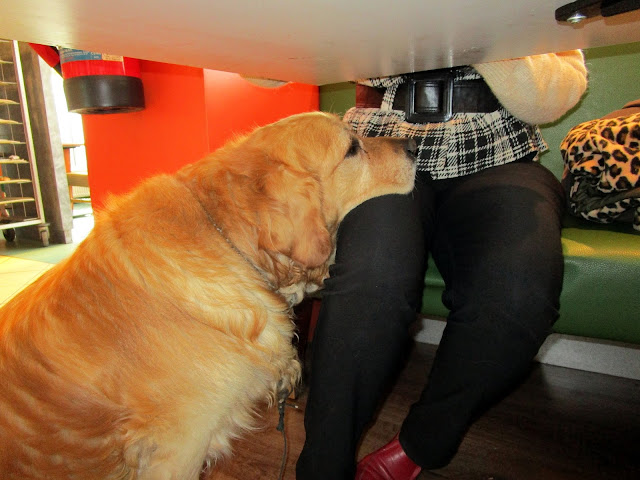 Is there something for me ??

A LITTLE WALK THROUGH BRUSSELS

Sometimes when we have a bank holiday and the weather is nice, I like to go to Brussels and mingle amongst the tourists who want to see the beautiful Grand'Place and of course also "Manneken Pis" the symbol of Brussels. That makes me feel as if I would be on holidays too. 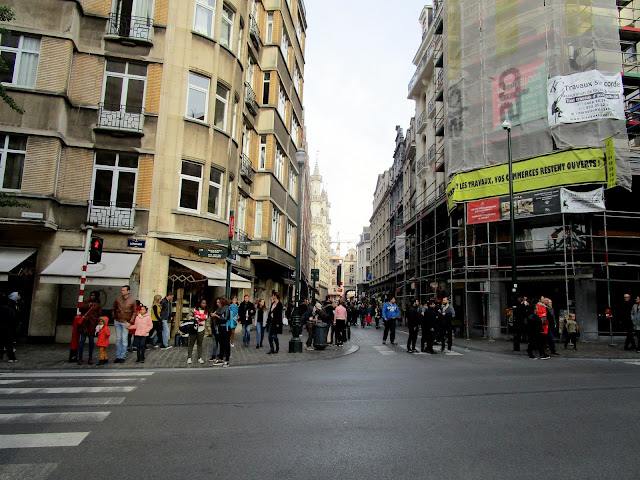 When I arrived there were a lot of people, of all nationalities 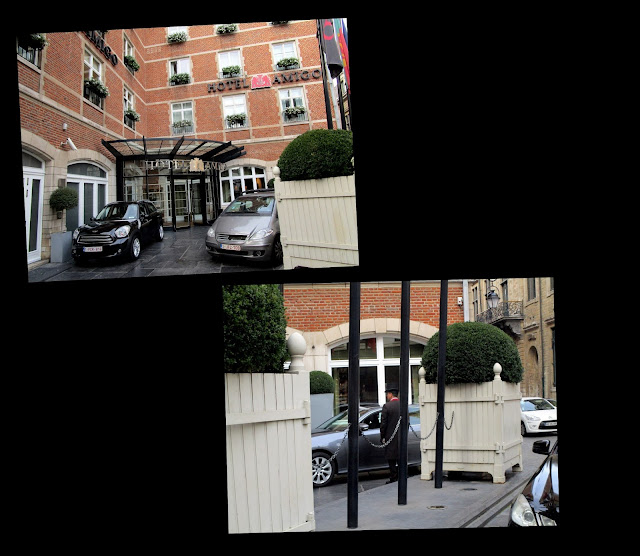 Apparently there are again guests in the most elegant hotel in Brussels the "Amigo", because of the terrorist attacks in March, the hotel and tourist industry had suffered a lot. 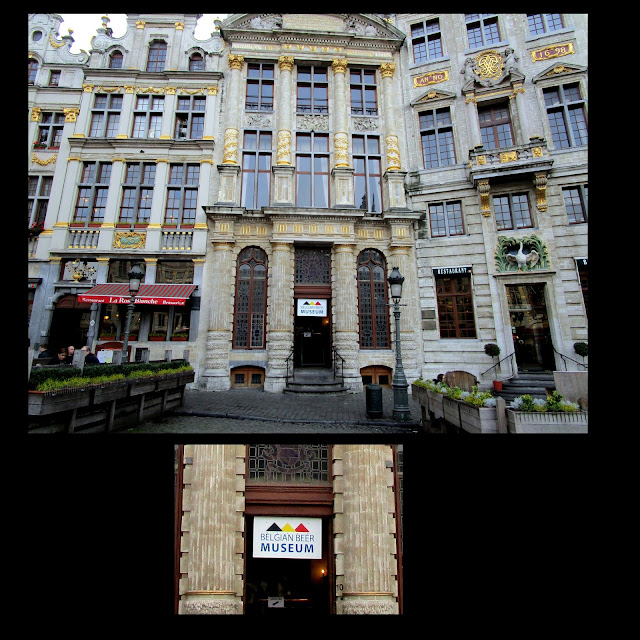 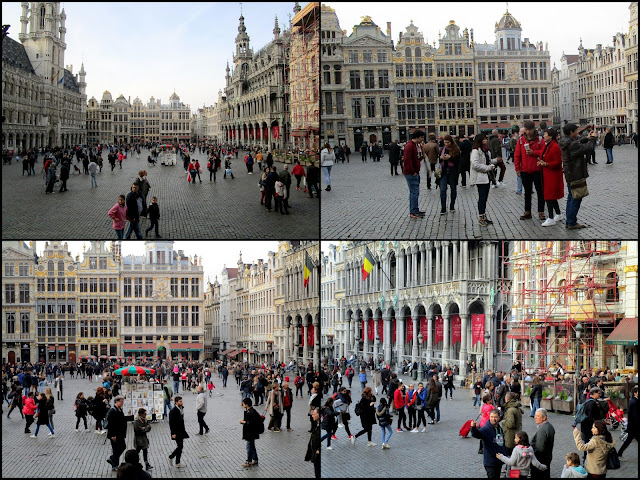 But on the whole place people walked around and took pictures The whole place had been recently renovated and the fresh gold painting glittered in the sunshine. 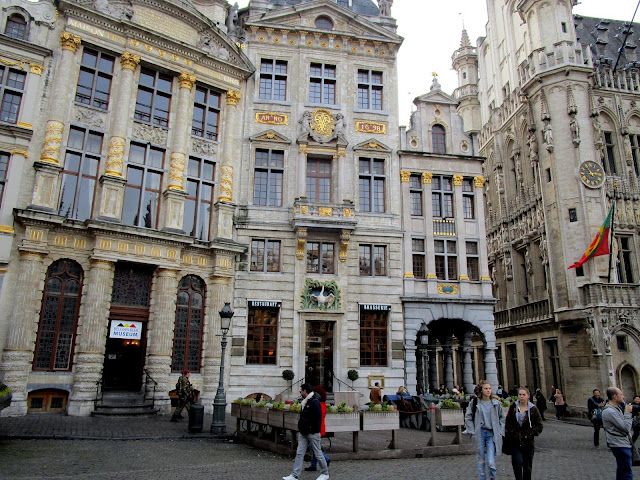 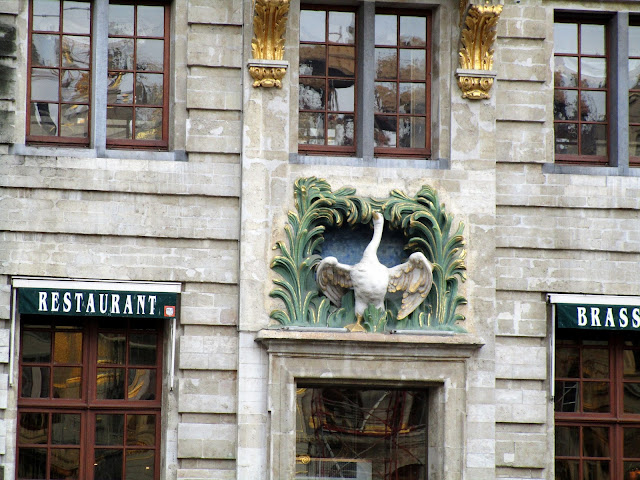 The Brasserie "Le cigne" (The Swan) was nearly full and people even sat outside on the terrace. 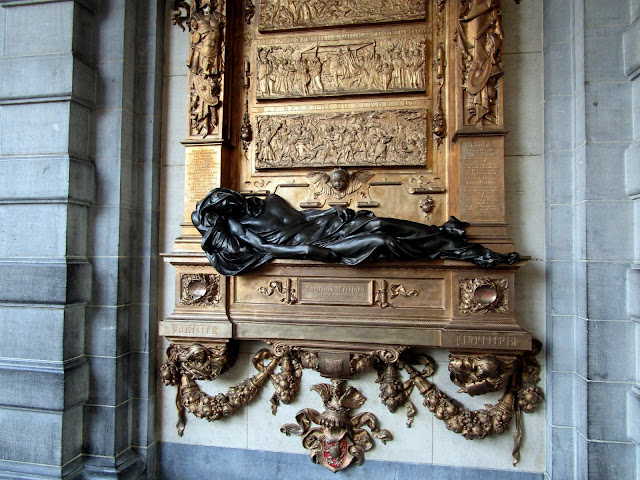 The statue of Everard t'Serclaes sculpted by artist Julien Dillens (1849–1904), had been painted completely into black very much to my surprise ! It is said among locals that the statue brings luck and grants the wishes of all who touch it. Therefore the black colour was gone because tourists touch (or rather rub) the statue, particularly the arm, because the legend says that rubbing the arm will ensure one's return to Brussels. Other parts are also touched frequently by the tourists such as the face of an angel, a dog, and one of the shields. This constant polishing kept the body shining compared to the rest of the sculpture, but now it had been repainted and they have to start all over again and rub ! 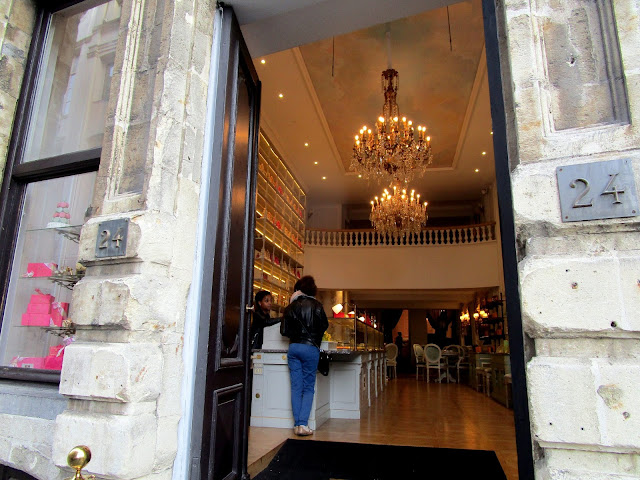 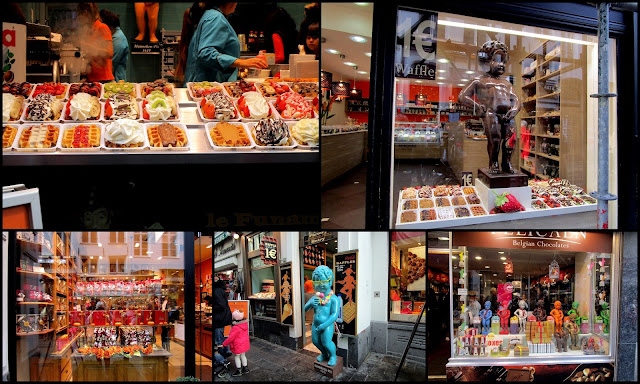 The Wafel and chocolate shops were also very busy 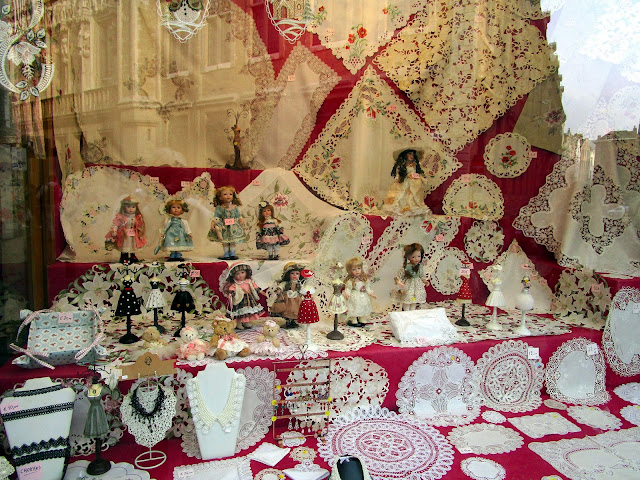 and tourists loved to look at the Brussels' laces There are many shops around the Grand'Place. 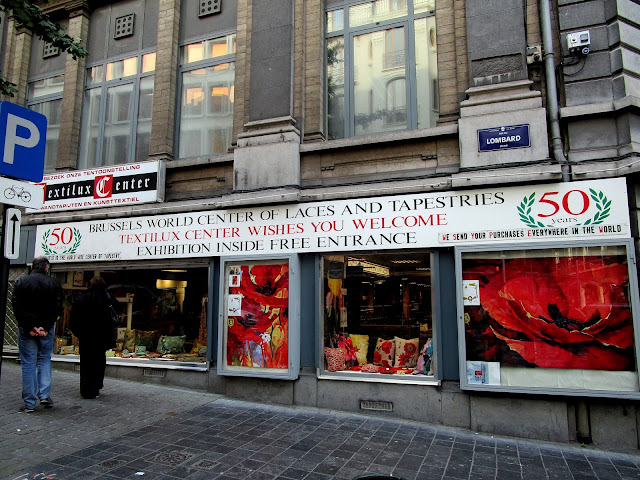 and a big shop where you could find all kind of souvenirs !

I had a quite busy Saturday ! In the afternoon Nicole and I were invited for a coffee and cake at a friend's house. Nicole had known her through a painting course and Mr. G. plays cards with her in a Whist group, that's why I know her too. She lost her husband 4 years ago and starts slowly to lead a new life alone. She lives in an enormous house with at least 6 bedrooms ! I would feel like a pea in a shoebox. We spent the afternoon together chatting, and then I had to leave because in the evening I had a supper with my Facebook group "Vivre à Waterloo" (living in Waterloo)

It took place in a Corsica restaurant and a band should sing and a humorist perform. The band was replaced by a singing couple, which was really very nice. They sang a little bit from everything, well known songs in French and English, from Rockn'Roll to Tango ! 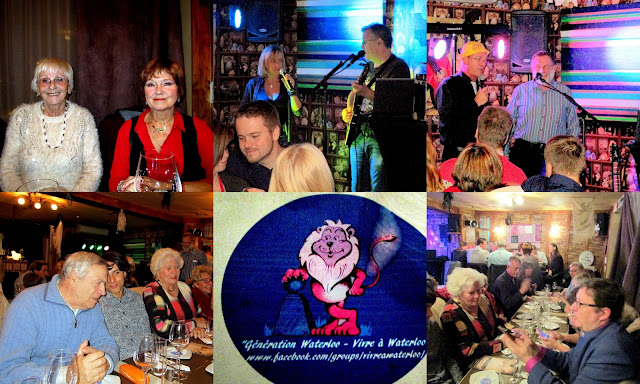 And here we are, I had taken Ilona along although she is not a member of the group, but Nicole couldn't come, she was too tired, because of her new kitchen which had been installed. The blond lady below is 80 years old and we call her "Queen Mum" she is such a funny lady and she danced more than all the others together ! It was a real pleasure to see that even at her age she still behaves like a young woman.

The humorist was very good and even had something nice to say about Trump ! We all laughed because in some way it is the truth ! "If Donald Trump becomes president of the united States, it will be for the first time in history that a billionaire moves into a public house which had been abandoned by a black family ! "

The evening went by too quickly with excellent food, dancing and a lot of laughter ! We left around midnight.

On Sunday I met with Nicole in the "Lunch Garden" the restaurant of Carrefour. There were a lot of people, because Sunday mornings there is a huge flea market on the parking space. We didn't make a tour because it was very cold and windy and we immediately went inside. 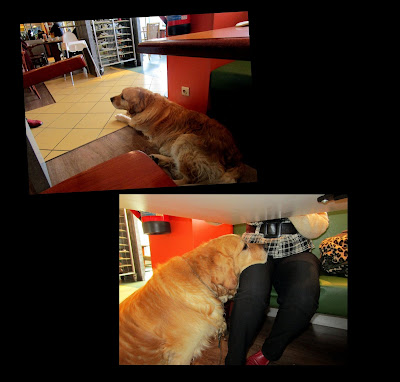 Charlie as usual watched over our meal, but at the same time checked from time to time if there wasn't anything "falling" from the table.

After lunch I admired Nicole's new kitchen and found it very beautiful. There are still little things to be fixed but the big work is done. We had a coffee together and then I went home, I had a lot to do with my photos I had taken from the Facebook people.