1. Each week I try to find something special for the meme "Our World" which was named "My World" before. When I travel it's not difficult, but when I stay home it's hard to find something I haven't talked about. Suddenly I had an idea, to write about the new shopping mall (post below) under construction. For that I had to go on the roof of a huge household and computer appliance store where I had a good view from the parking there. I took my pictures, and as I was already in this shop I bought a little hand vacuum cleaner for cat hairs and crumbs.

2.  It was the day where Belgium's football (soccer) team "The red devils" should play the very important game against France to win the world cup.The whole city was in excitement, Belgian flags where hanging everywhere, to my surprise because on National Day there are far less.

The place in the park with the huge screen had been enlarged to receive 5000 fans ! The game should start at 8 pm, but when I crossed the city at 6.30 pm, people of all ages were already arriving, direction park. 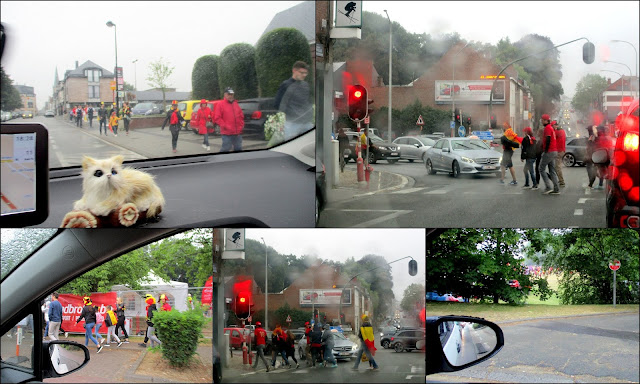 I pitied them because it rained and they got all wet, on the way and then in the park, the flags were hanging down, the hats too but the mood was in full swing and I heard them singing and shouting that Belgium would win. I wished it too when I saw them so full of hope. Two and a half hours later a deadly silence lay over the city, Belgium had lost.at least place N° 1. maybe they will be second or third, I don't know the rules.

3. I hadn't seen Nicole's new "baby" since 2 days and  of course I wanted to see her and also hear how she gets used to her new home ! After having changed her name 3 times, now little cat is called Isis.
The name she had got in the shelter was a bit stupid it was "Girly" ! Isis suits her much better. In this short time she has taken over the whole huge apartment, disposes over 3 personal rooms and has educated Nicole ! She is allowed on the terrace, sits on the wall and looks down. No intention to jump and commit suicide. She even has conquered Nicole's bed ! It's so cute to see them both together ! That was really love at first sight. Little Isis has huge cross eyed eyes and when she looks at you you don't know in which eye you have to look, so funny !

4. We had the doubtful honor to receive Mr. Trump and Mrs Trump (??) ! The streets were full of people who protested against his arrival. 2500 policemen and also soldiers had been mobilized to protect this "precious" man !  He landed on July 10 evening to attend the NATO summit. But, World Cup requires, no special treatment for Donald Trump ! Neither the King nor the Prime minister came to welcome the head of the state, who was simply received on the tarmac by the Belgian US ambassador. Probably they still had enough from his visit last year. 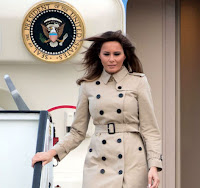 On top of that it seems according to the press, that the real first Lady wasn't there but her double and a real bad one (even I thought without knowing it) that her face was larger and not the same as usual when she stepped out of the plane together with Trump.  The journalists were also very upset because only a few pictures were allowed and from very far (security). Whole Brussels was congested, people were furious, they stayed up to 2 h or more on the streets and missed airplanes, trains etc. In short it was a mess and all this because of this lunatic guy, who made America not great but rather ridiculous in most of the people's opinion.

5.  Instead of playing scrabble we had decided to paint together in one of our scrabble girl's yard. But as the weather was not so stable we gave up and scrabbled as usual. 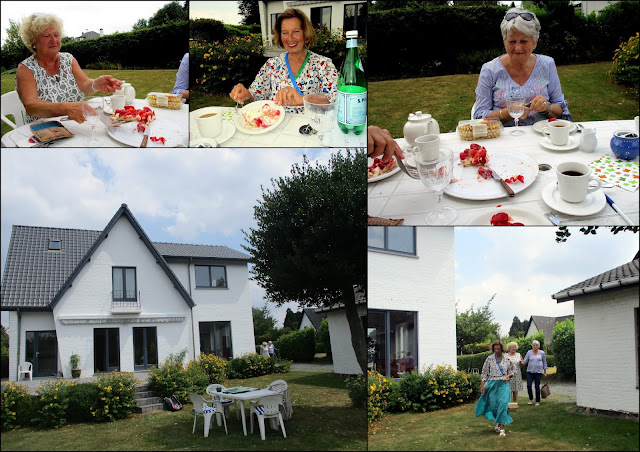 It was a very pleasant afternoon in Helene's garden. After our scrabble game where I as usual lost and Mireille (above right) who is half blind as usual won. The strawberry cake we had afterwards was delicious !

more participants at Susanne at Living to tell the Story.
Posted by Gattina at 07:00 6 comments: 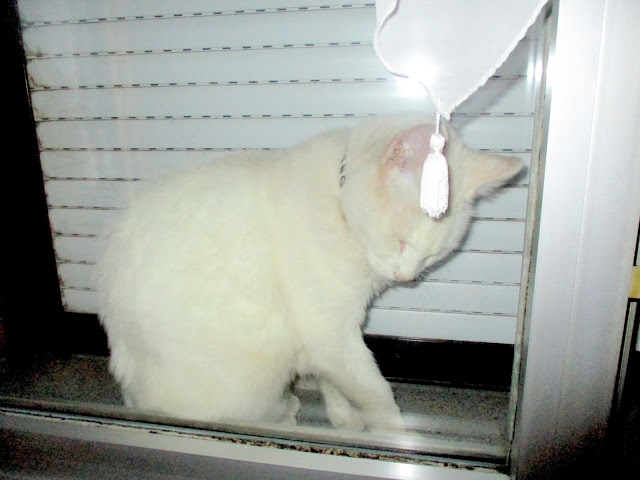 
1. What's something in your house you'd like to get rid of but can't? 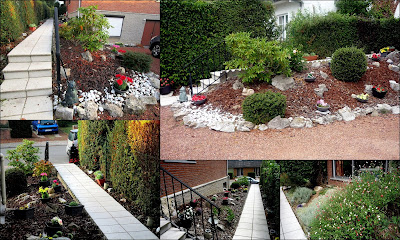 My garden (yard) ! I have no green thumb and it gets harder and harder to entertain it when you hate garden work ! I had made it at easy as possible but still !

2. When is the last time you experienced a sense of nostalgia? Elaborate. Each time I think of Eastbourne and London, which I used to visit each year in August. This will be the first time since 2008 I am not going. I will do the tour around the Northern Countries.

3. You're only allowed three apps on your smart phone or tablet...which three do you keep?

I would keep the mobile phone app, my calendar, and internet of course !

4. July 11th is National Blueberry Muffin Day. Who knew? Do you like blueberry muffins? If you were going to have a muffin would blueberry be your choice? What's the last thing you baked?

My mouth is watering only when I think of Blueberry muffins ! Unfortunately they are completely unknown in Belgium and I can only find them in an English shop. Each time I go to the UK I never miss to eat a blueberry muffin !!

5. What's the biggest way you've changed since you were a child? In what way are you still the same?

That's a difficult question ! I think I was quite ugly when I was a child and that changed once I became a teenager. I also changed my life motto to "Live and let live" and only give advices when I am asked for. Otherwise I am still the same. (I think)

I thought going shopping this afternoon, but I better stay home. Tonight at 8 pm is the football (soccer) World Cup transmission on huge screens in the city center and as there will be thousands of people coming, they start already arriving in the afternoon to visit Waterloo and to find a good place. The city will be packed, I better stay home ! 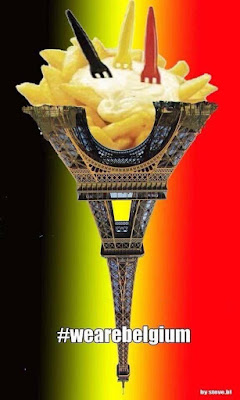 Many of you know the Supermarket Carrefour, created in France as a shop (not hypermarket) in 1960. It expended in many cities and starts its internationalization  in 1969 in Belgium together with a strategic alliance of the GB Group. Between 1970 and 2000 several formats work with multiple brands and names. In 2000, the Carrefour Group takes over GB and Carrefour Belgium, In 2007 it officially becomes Carrefour Belgium

Unfortuntely in February 2010 Carrefour announced the elimination of 1,672 jobs and the closure of 21 stores and the possibility of acquisition of 20 stores by the group Mestdagh.

Our Carrefour in Waterloo  survived until end 2017 when suddenly huge changes were announced. Carrefour became "Bix" a project which includes the construction of a new building on the parking area, which is now closed to cars: it will accommodate a Brico Plan-It (more than 13,000 m² ), which will replace the Brico currently located in the city center.

The car pole, Auto 5 is already there as well as the car wash. "On the new part of the Brico Plan-It, the transition between city and countryside will be highlighted by a green roof that will join the gently sloping fields: the new constructions seek to integrate into the landscape and historical environment.

In terms of mobility, the new facilities will give room for pedestrians and two-wheelers and the total capacity of the car park will be increased to more than 1,400 places, by the construction of two levels of parking in the basement. 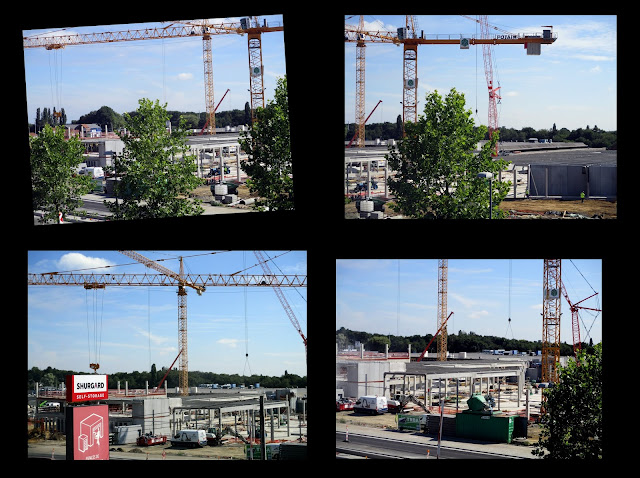 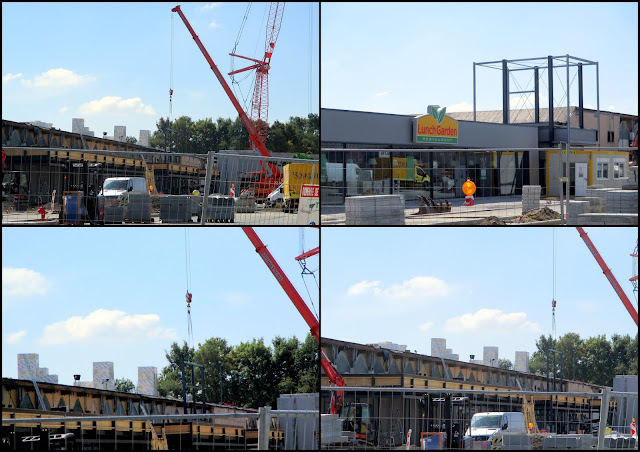 I had seen all the digging and suffered the redirections caused by this huge construction site.

From all people I asked nobody knew really how it would be. So I went there and took pictures. The works were quite advanced, it probably will be finished in 2 months or maybe less, that's what they say, but I think it will last more than less ! 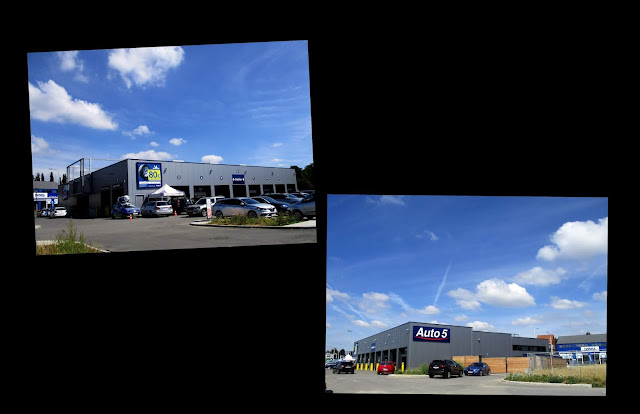 The only building which is finished and already in use is Auto 5 which repairs cars !

The plan looks like this, I think it will be a nice place to walk around in winter or when it rains. Carrefour will become a "mall" called Bix.

And this is the finished dream of the architects ! I wonder when I can see that in reality !

What a change to my good old Waterloo, where only little shops existed, and which was surrounded by fields and farms and I think there were more cows than people at that time ! But we have to go with the time ! At least I had the privilege  to live for more than 30 years really on the countryside.

Another sunny weekend went by we are really spoilt this year ! On Saturday I did some shopping for my little birthday celebration on Sunday afternoon. Nothing special only my best friends. My son and family are in England and couldn't come, but we will celebrate later when I go to Amsterdam in 2 weeks. 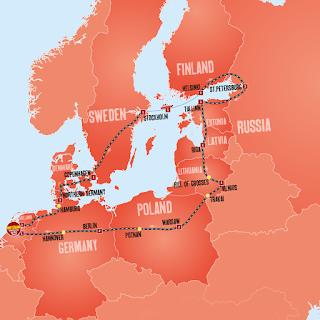 As I am doing this big trip beginning August I had asked for pocket money to buy me something which I like perhaps in these countries. My son offered me this cute piggy bank  at Christmas with something inside of course. Now I am hoping that the cat gets fat on my birthday ! 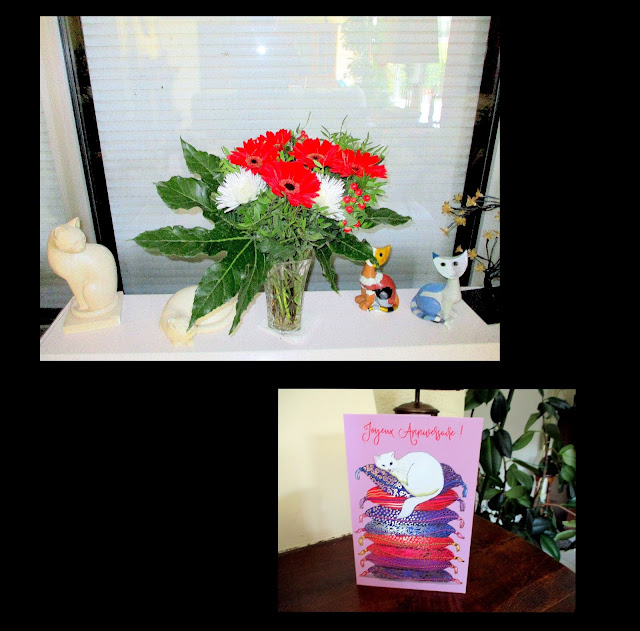 Mr. G. offered me this beautiful bouquet, and my friend Bunny sent me a paper card, although she knows that I prefer virtual once, but she insists she is sometimes a bit traditional. 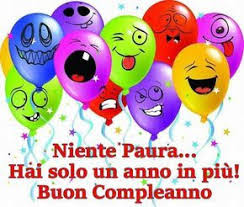 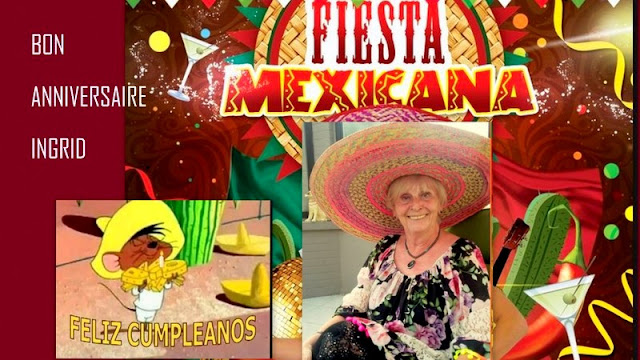 And another friend had composed this card for me !

On Sunday I got lots of birthday wishes via Messenger or Whatsapp ! Son and family called too.
After lunch I prepared the table and everything for 3 pm when my Birthday party should start. 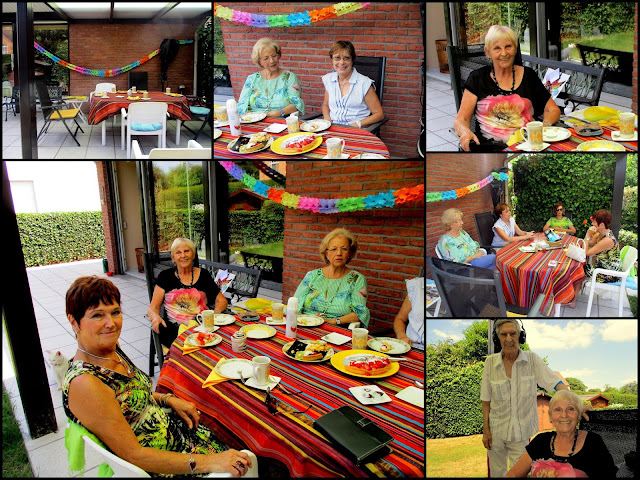 First we had a delicious strawberry cake on which I had tried to write a 75, and then forgot to take a picture. Mr. G. had his Formular one and was happy, while we chatted about important and less important things !

Later for the Champagne and little snacks he joined us, he still had his earphones on and looked like a Teletubby. Our 3 cats were sleeping on the lawn, only Arthur asked for whipped cream of course.

Another birthday over and I enjoyed it very much !
Posted by Gattina at 07:00 6 comments: