1. My holidays at the French Riviera continue, and I enjoy the warm weather and the sunshine very much. 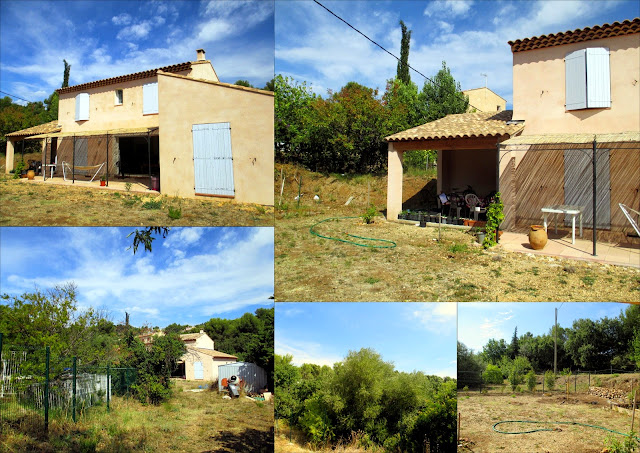 I live in Claudie's house. My room is just above, the shutters nearly closed to keep the heat outside.There is nothing around but bird singing and the chirp of crickets.

2. There is only one neighbor, her sister with her husband. 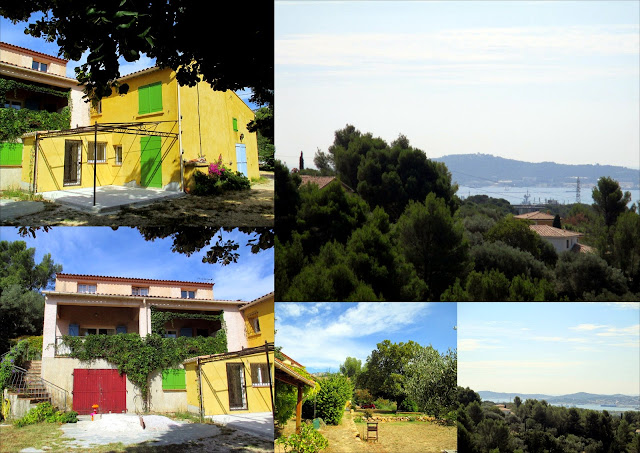 The house is on the other end of the property and you have a beautiful view on the sea. 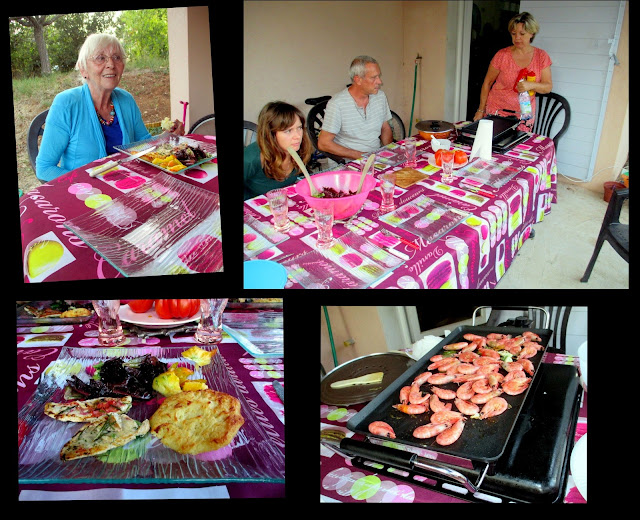 We live outside and Claudie's husband who adores to cook prepares us delicious meals. 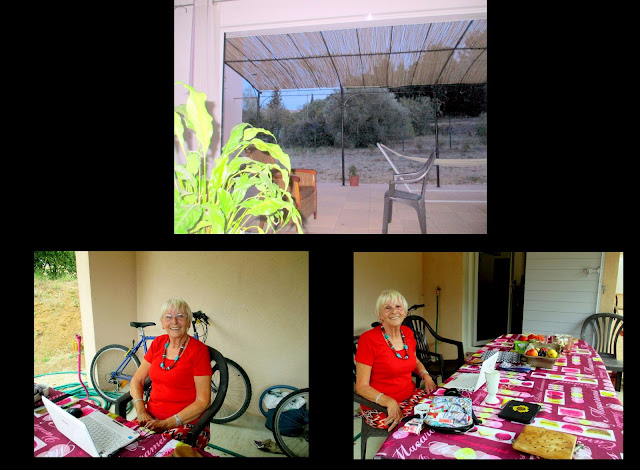 I blog and read on the patio, there are two of them, so I have the choice. It's far too hot in the sun. The bike behind me hasn't served yet, but the intention is there (not for me !) 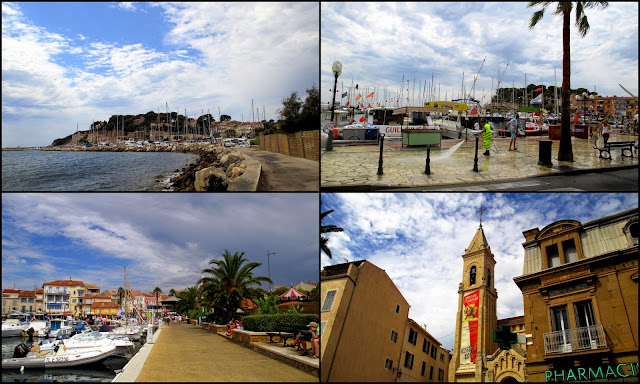 Late afternoon when it is a little cooler we go to the habour and have a drink there.

The evenings go by very fast, sitting outside and chatting. These are real holidays !

And certainly not  me when it comes to keys and glasses ! When my friend Claudie was here, I wanted to take her to Ostend at seafront. It's about 1 1/2 h drive when the highway is not fully packed. We wanted to leave at 9 am at the latest.

I had everything except my glasses on my nose and without glasses I am blind like a mole, I am shortsighted. I looked in my room, no glasses. I tried to remember where I had been in the morning. No glasses in sight and without it is also difficult for me to find them. I called Mr. G. for help. First thing he did was looking in the fridge as I once had put my slippers in there. He looked in all cupboards in the kitchen, turned over the bin, checked the inside of all pots, without any result. Maria my cleaning lady was there too and looked under all the furniture in the house. She removed my bed, found tissues and an old wallet but no glasses. Meanwhile Claudie joined in and at 4 people we were looking for the glasses. Nobody found them. They had just disappeared. Without glasses impossible to drive. Finally I found an old pair which was not really perfect but at least I could see the signs on the street.

After  Mr. G.knowing his wife had  checked the inside of all my shoes, had checked my wardrobe, there was nothing to do, the glasses had vanished.

It was getting late so we left. After an hour I got a call from Mr. G. Maria had found the glasses behind the door of my room. I probably had pushed them there when I took my cardigan ! This was the only place in the house we hadn't looked ! 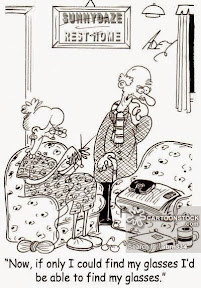 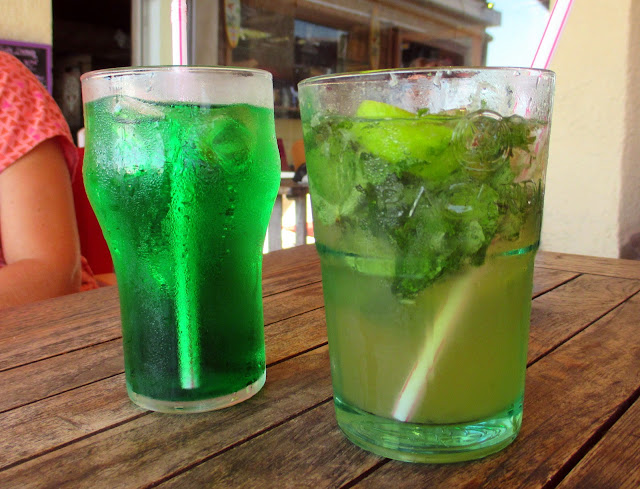 
****
Today I had to get up at 4 am ! My plane to Marseille was at 7.30 am. I was limited with my luggage weight to 10 kgs  otherwise I would have to pay more then my flight ticket ! Therefore I put on 4 trousers and 4 T-shirts plus a fleece jacket and my coat. The trousers where for my friend, mine were in my suitcase ! And only one was allowed.  When I went through the scan, it rang. Without a handbag I had put all my things in the pockets of the 4 trousers. The lady who checked me got crazy when I emptied the 8 pockets of my 4 trousers. As she didn't find neither knife nor pistol or other weapons on me she let me go near a nervous breakdown.

When I arrived in Marseille it was very warm. I immediately went to the toilet and got rid of 3 pairs of trousers, I kept one and 3 T-shirts. I put everything in my suitcase and took my handbag out in which I put the things I had carried in the pockets.

When I had finished, Claudie just arrived at the airport to pick me up. 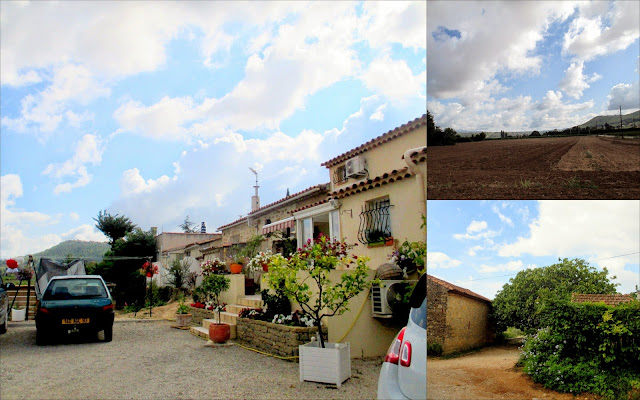 On the way to Ollioules where she lives we picked up her eldest daughter who lives in this charming place in the middle of fields with her boyfriend. 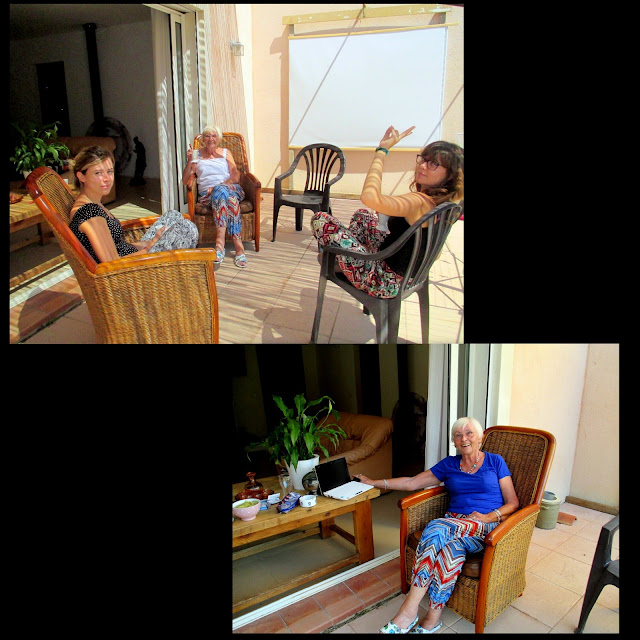 We had a nice lunch and sat on the terrace together with her two daughters. The crickets chirped, the flowers and plants around smelled so good ... I was in the South at the French Riviera. 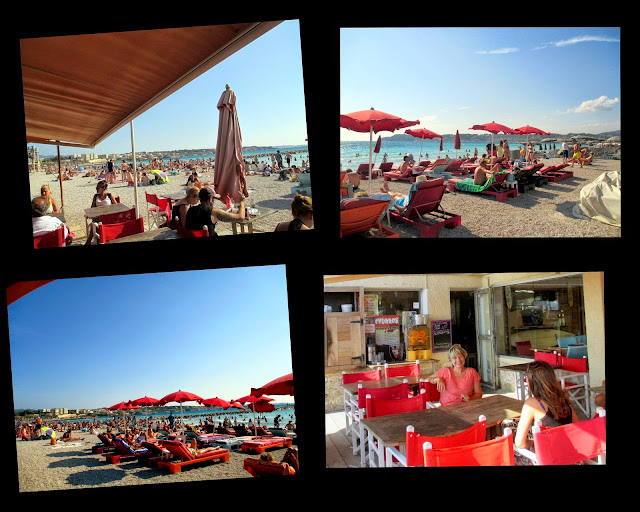 Late afternoon we went to the beach and had an aperitif on the terrace of a little bar. There were so many tourist ! and the beach was packed ! Too many for our taste. We left after an hour and drove home, had a wonderful supper with grilled fish, Salad and roasted potatoes, cheese and a desert.

I went early to bed, after such a long day I was tired.

Each time I have visitors from abroad, I try to show them places which are not yet so well known by tourists, but will be in the future as Brussels is in full bloom for renovating and promoting other interesting historical sites of Brussels. Read more here.

MY WEEKEND OF AUGUST 16

After having spent the week with sightseeing tours through Brussels, with my friend Claudie from the French Riviera, I only wanted to spent a quiet weekend and rest.

Unfortunately Mr. G's office chair became moody and when he wanted to adjust it to the right level to work on his new computer, the thing suddenly sprang up and became so high that it looked more like a throne then an office chair. He tried to get it down again. Nothing to do. He sat on it and moved up and down, nothing. I sat on his lap to make the weight heavier we moved up and down, the thing didn't move despite the fact that now 155 kgs were sitting on the chair. Fortunately nobody saw us hopping up and down except the cats but they were not at all intrigued by this procedure.

We decided to buy a new one, I googled for a new office chair and finally found one suitable at Ikea. Off we went. I have to point out that this was the first time since at least 15 years that we went shopping together ! I have to put a special sign in our calendar !

On a Saturday Ikea was packed with shoppers and it was hard to find a parking space. Mr. G. got already nervous, he hates driving around and looking for spaces. Fortunately I had the references of the chair and we made our way through the crowd until we found the office furniture. By that time Mr. G. had more then enough and became grumpy.

Those who know Ikea, it's huge ! Finally we found the chair and I insisted that at least he tried it out. He sat on it as if he had to sit on a burning stove, and found it OK immediately. I had to check if it was easy to set to the right height, when he was already heading to the exit.  Of course the chair was packed in a carton which we had to pick up in a special area with rows and numbered spaces. When we finally found it, it was too heavy to carry without a caddie and I tried to find one, while he was waiting with the carton. When finally he got the chair in the car, I was exhausted not of having walked around but by the fact that I had to pull and push him through the crowd !

When we came home he also was exhausted, he hates shopping and especially in such big stores. He didn't even unpack the chair, and took a long rest in front of the TV ! Actually he rested there for the rest of the day and swore that he would never go into that shop again. 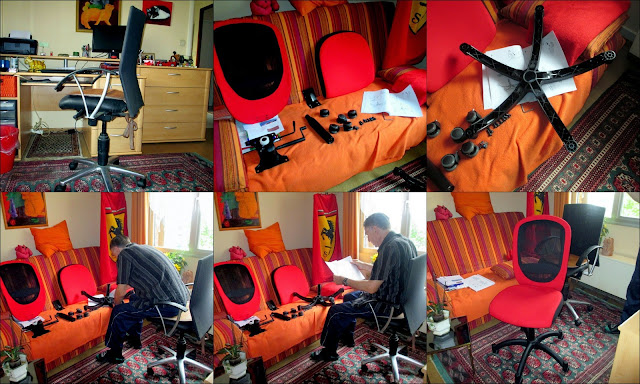 On Sunday morning he assembled the new chair, reading the Ikea instructions, for once apparently quite clear, otherwise I would have heard some @#§% noises. He is happy with the result, especially because it is a red one, being a Ferrari fan he loves red !

I had to go again to the midi market, because the trousers Claudie had bought for herself there, had been immediately confiscated by her two daughters, who loved them very much as well. I have to say for 5 Euros (6.70 $) per pair they are a real bargain. So comfortable to wear, you can sleep in them ! 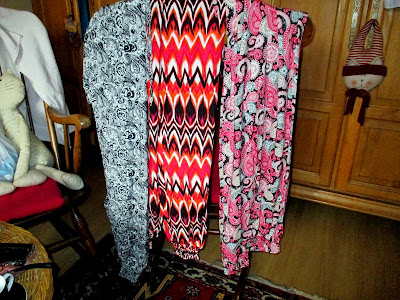 I choose these 3 once and hope they will please as well. These trousers are so nice that several ladies in London and Eastbourne stopped me and asked me where I had bought them ! 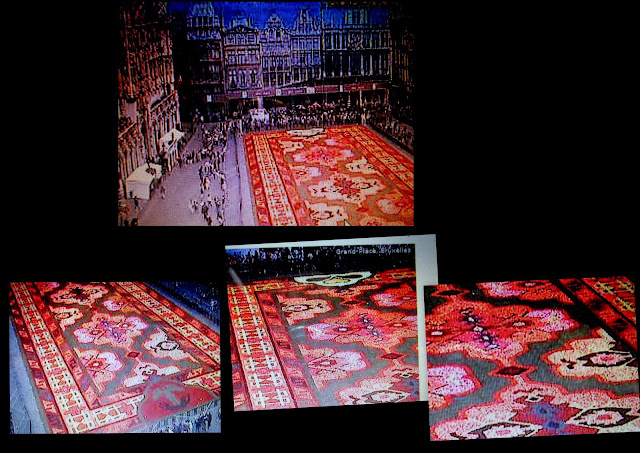 Every two years the famous flower carpet is displayed on the Grand'Place. This year 1.800m2 of bégonias were used to make this carpet together with Dahlias, bark for the dark brown and grass for the green pattern. I had enough walking in the cold, wind and rain from the market, so I googled for the Brussels Grand'Place webcam and took these pictures. I had also seen the inauguration on TV. 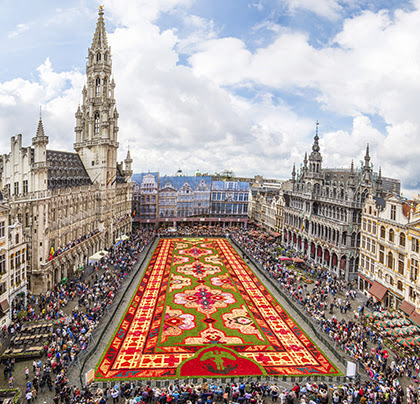 I decided to return in two years, meanwhile I "borrowed" the photo from Internet.
Posted by Gattina at 06:30 8 comments: