Mr. G had a very nice idea, he bought a little bird which should great our visitors with a joyful chirp.

The bird once installed on a cabinet in front of the door, did indeed it's duty, it chirped, but not when I opened the door to great the visitors but when they were already in the house and took their coats off. Which always caused a little shock of surprise and laughter when they saw that it was only a little ceramic bird. Maybe in ceramic, but with character.

It showed it the day the sun was shining for the first time since weeks but there were also clouds pushed by the wind which moved along the sky. And little birdie started to chirp each time when a cloud obscured the sun.

First time Mr. G and I sitting peacefully at our computers accused each other to have moved and made the bird chirp, but we both were innocent and like Miss Marple I concluded that the culprit was the sun. After 2 h of chirping, silence, chirping I had enough and thought I will find a place where it doesn't "see" the clouds. I could have turned it off or take out the battery but no, I wanted to show it who was the master.

I put it high up on my vitrine with all my cats and thought now it won't dare to chirp anymore or only when I open the door. But the bird thought otherwise and continued to welcome the clouds with its joyful chirps.

I put it besides the toilet on a little cabinet, where it shouldn't see the clouds but it must have very good eyes because it continued to chirp and as there were many clouds going by we both felt a little nervous. Finally I found the ideal place !

In the basket on the floor, where he still could greet eventual visitors but wouldn't see the clouds ! I put him there, besides the cat sitting in the basket to calm him down a little and it worked ! Clouds came and went by and the bird didn't make a sound.

Peace was again over the house. But not for long ! The bird chirped again ! It couldn't be the sun and nobody was in the entrance ! and then I realized ... now he chirps each time a cat goes by ! I think he won, I have to take the batteries off and great our visitors myself with a chirp.
Posted by Gattina at 06:00 5 comments:

This week I have some new items to show. The son of my friend Chantal was in China and brought back this adorable red little tiger, which were sold for the chinese New Year, because this year is the year of the tiger.

It now hangs on my shelf

My cleaning helper Eva brought me this cute little cat from Poland, when she came back from her holidays.

and this is the last picture I painted. The theme was "anything in cubistic style". I don't like Cubism but finally I made it.
Posted by Gattina at 06:00 8 comments: 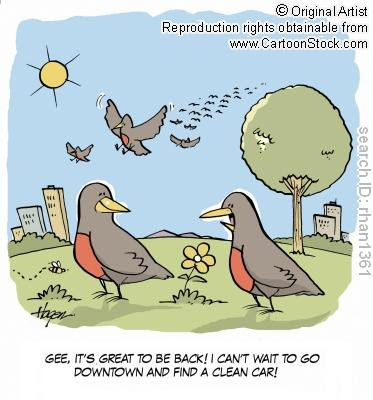 1. Walk lightly in the spring; Mother Earth is pregnant

2. Spring is when you feel like whistling even with a shoe full of slush.

3. An optimist is the human personification of Spring.

5. In the spring, you can count 136 different kinds of weather inside of 24 hours.

6. In the spring, at the end of the day, you should smell like dirt

7. Spring is when the earth laughs in flowers

8. Spring is sooner recognized by plants than by men.

9. Unless a tree has borne blossoms in spring, you will vainly look for fruit on it in autumn.

11. No matter how long the winter, spring is sure to follow (this year I have my doubts !)

12. Sitting quietly, doing nothing, spring comes and the grass grows by itself.

13. The first day of spring is one thing, and the first spring day is another. The difference between them is sometimes as great as a month. (very wise !)
Posted by Gattina at 06:00 19 comments:

Arthur went to the plastic surgeon
Posted by Gattina at 06:00 14 comments:

When I go to Brussels I mostly take the train because there is so much traffic and parking spaces or places are very expensive. It costs more then my train ticket, as I am retired and can travel in whole Belgium for only 5 € (7 $). I don't do any shopping in Brussels, because we have all the stores in Waterloo too. Waterloo is about 15 km (9 miles) far from Brussels.

It was a beautiful weather but freezing cold for the season only - 4°C (27 F !). When I saw that the windows of my wagon were clean for once it gaves me the idea to take pictures out of the train all along the way to Brussels, because this is my world too.

I was sitting in the warm wagon and my fingers didn't get cold either and to my surprise the pictures came out quiet well because I only have a little Sony Cybershot camera.

country side at the beginning of my journey

usually there are cows and horses but they probably were inside because the weather is too cold.

one of the stations. The train stops everywhere !

and the usual "art work" of dirty taggers !

Then start the first houses of the Brussels' suburbs

it's not a very beautiful looking area

here live the poors and mostly imigrants from Morocco

arrival at the Midi station.

On the left top picture you see the red train "Thalys" which takes you from Brussels to Paris in normally 1 hour, 22 minutes, for a distance of approximately 300 kilometres (190 mi). Peak speed is 300 km/h (186 mph) on a dedicated high-speed railway track.
Posted by Gattina at 06:00 6 comments:

Most of my grocery shopping I do in this supermarket. Aldi is a German supermarket chain, established in most of the European countries. The prices are cheaper and the quality is good, they don't have famous branded articles but their own once.

For long time it was considered as a supermarket for the poors at least here in Belgium. No posh lady would ever shop there officially. But I met them at Aldi and they weren't very happy about it. I even know one who admitted to buy her sparkling water here because it's half price and then she put it in Perrier bottles for her husband, who swore that Perrier tastes different than other sparkling waters ! Since a couple of years Aldi has another clientele. Everybody goes there now, the poshs have also realized that laundry can't get more white with expensive washing powders, unless you want to get blind.

Unfortunately I deleted the picture of the Aldi shop and my trolley so I took this one on Sunday. Sundays all shops and supermarkets are closed that's why you don't see any people.

Things I don't find at Aldi's I buy at Carrefour, which is a French chain. The day I went shopping the personal had been on strike the days before, because the Frenchs want to close down in some Belgian cities which would cost a lot of working places. As you can see it was rather empty in there and nothing fresh to buy.

For my cats I go to Tom & Co. They have everything a cat heart wants and of course for all other animals too. At least here I have picture of my shopping bag.

Usually I go grocery shopping once a week except of course when I need something special or especially fresh. For my cats I do it once a month.

Now I am curious to see your shopping habits.

I needed some pebbles to decorate a vase when I saw that the easter decoration was already in the store ! As I really have enough of black and white winter colors I enjoyed the view of spring !

All kind of Easter decoration

Bunnies and a funny sheep

a rather real looking hen

and two fountains for the garden

These were Weekly Winners for me when I left the shop and entered the grey rainy outside world again.
Posted by Gattina at 06:00 8 comments: