1. The wireless headset I had bought for Mr. G. caused some difficulties to connect to the TV, although it seemed to be so simple. But apparently our TV had special connection holes which were hidden behind so with the help of the store Mr. G. finally managed to install it. 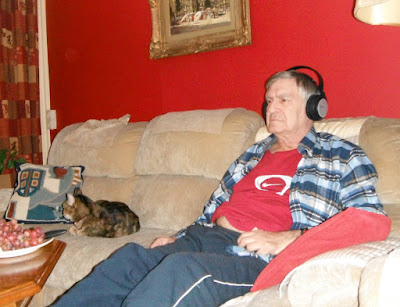 Now peace moved in and I can listen to a normal sound volume and he can adjust it as loud as he wants to, without disturbing me. Now he complains that he can hear himself eating his cheese ! Men ...

2. To my great grief it had snowed again ! I am so fed up of this white landscape ! I want to see green and flowers blooming ! 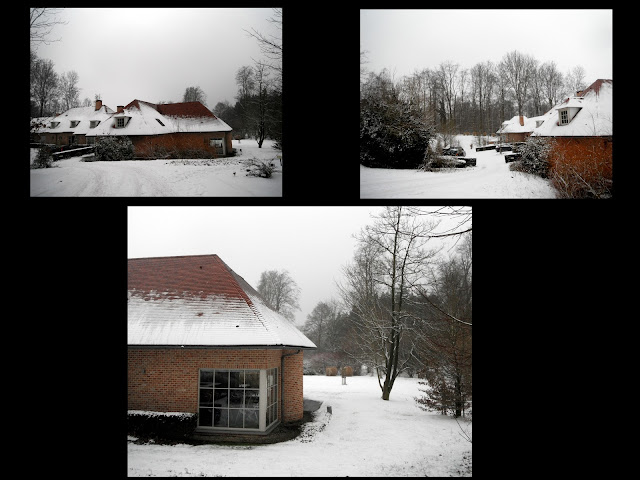 Driving to my aqua gym was a little slippery, but the view on the house was beautiful, although I didn't like to admit it.

3. Our cat Kim must have been a sheep in her former life because she has an amazing "wool" production. 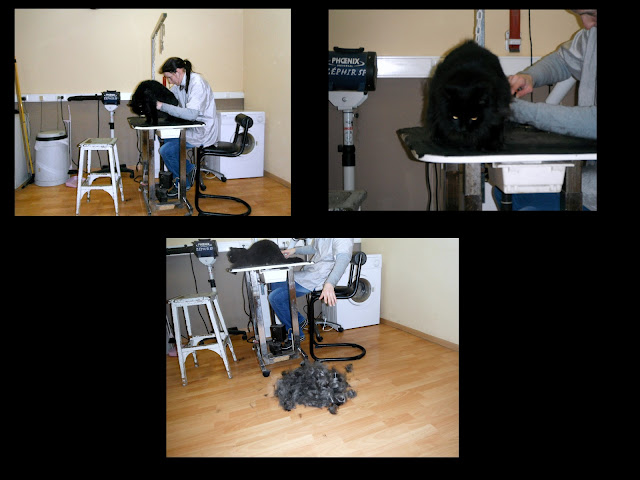 I had taken her to the groomer just before Christmas, and then we noticed that she was full of knots again. Isn't that amazing what a mountain of hairs came out of her fur after this short time ? We are not allowed to groom her, she runs away, but at the groomer she is the best cat of the world and purrs. Only to put her in the carrier is a huge work, which leaves us red faced and breathless !

4. What can you do in this bad and humid weather ? Going shopping ? I don't like that. But I like to walk around in the Charity shop and look what is on offer. I came back with two wooden puzzles for 2 year old Toby and a little racing car and also found a very nice book about how to learn to draw and paint for my friend Chantal's birthday tomorrow. 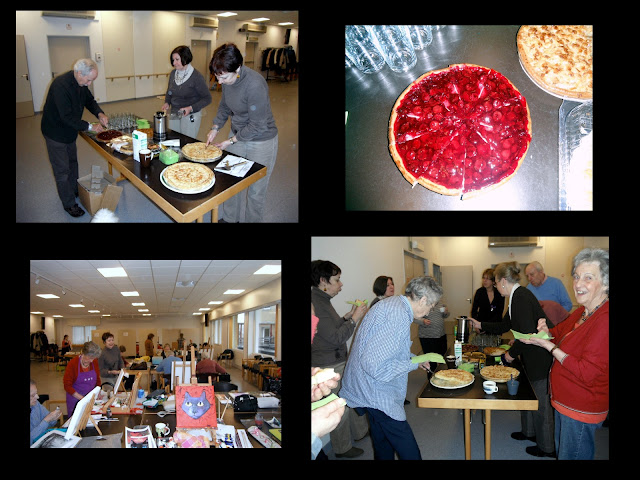 Three  of my classmates celebrated their birthdays and brought cakes and champagne along. There were 4 different cakes and they were very good ! On the top left, my teacher and Chantal cut the birthday cakes. I also started a new painting with you can see it's the blue cat head.

We had an animated big discussion about the Pope ! Everybody was angry that wherever you went you heard the pope or in TV or in the radio the whole day. We all had an overdose. Belgium is a catholic country. On top we found it very commercial and certainly not in a Christian spirit, there was no modesty but pageantry and a great business show, imagine that you had to pay an expensive entrance fee to attend the mass hold by the pope !  Which means that he only is available for the rich and not for the poors. The Vatican is getting more and more rich while people are starving in our world !
Posted by Gattina at 06:00 14 comments:

THE DIFFERENCE BETWEEN OLD AND OLD

When it comes to humans then old gets another meaning. You don't become or want to become an antique ! You don't increase in value neither unless you are very rich and your heirs are waiting that you are not getting too old because they want to get your money when they are still young enough to enjoy it.

The word "Old man" has also a completely different meaning when it comes to an "Old woman". If a woman calls her husband "my old man" that sounds nice and rather cute, and you imagine a good natured old man, sitting on a bench with his wrinkled hands on a stick perhaps, watching birds, for example. But if a man calls his wife "my old woman" then you imagine a bad tempered woman with a wrinkled face  threatening with a cake roll.

Finally there are people who are never getting old. Even if the shell changes outside their character and mind doesn't change. They become wiser and go with the time. They enjoy the new inventions and even a 90 year old can enjoy iPads.

And then there are the others who are already "born" old. They were never young and with the age it doesn't improve, like a good wine for example. They become bitter, live in the past and refuse everything which is new except the television. They mostly start a sentence with "At my time", although they are still alive. They are mostly not very healthy, are only happy when they can talk about all their physical miseries, while the other once never talk about them and try to rather enjoy the time which remains.

An "Oldie" is not only a musical piece but also an old human, the once who are appreciated, who are cheerful and good tempered. Calling somebody an "Oldie" has an affectionate meaning and they are very much appreciated by the "youngsters".

I think I rather belong to the "Oldies", despite the fact that I am not always "good tempered" and you ? (But that is a stupid question !) 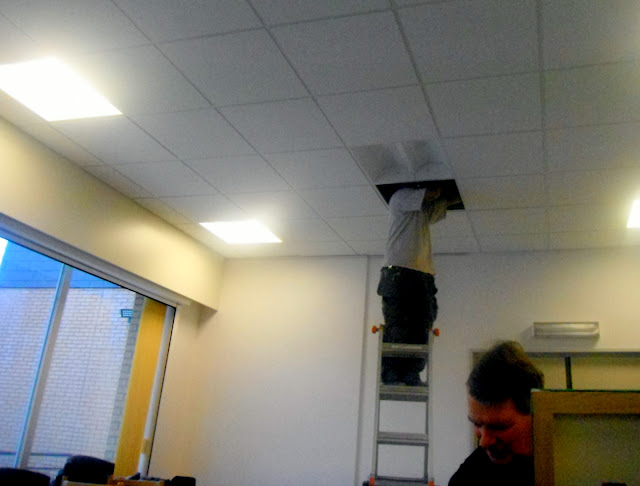 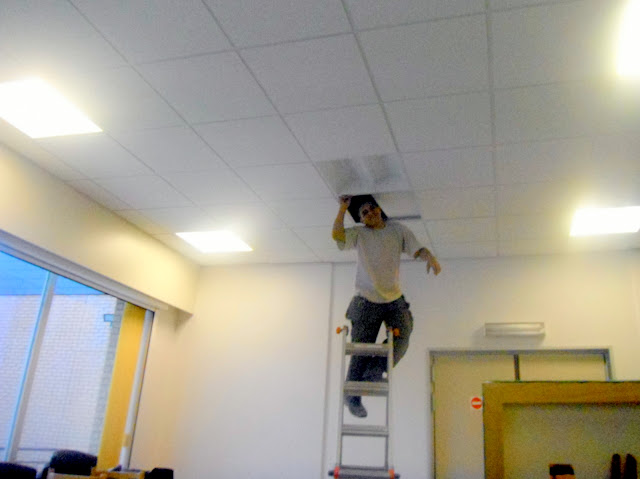 THE ALBERT CANAL IN BRUSSELS

During the Second World War the canal functioned as a defense line.

From May to September, "Brussels by water" organises tourist boat trips on the canals.That's a nice way to see the skylines of Brussels, the very flat countryside and other interesting views. 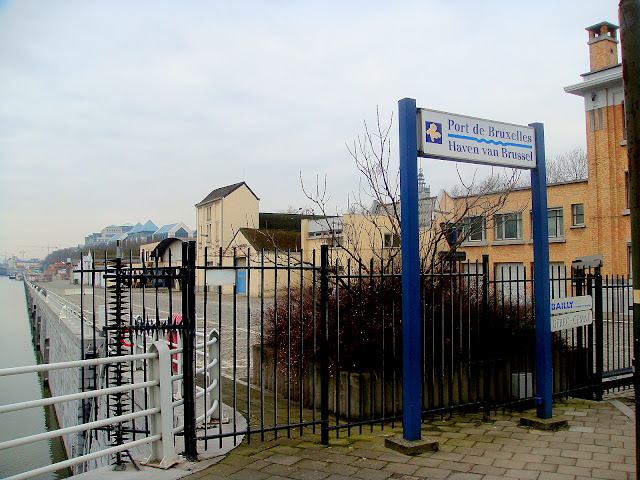 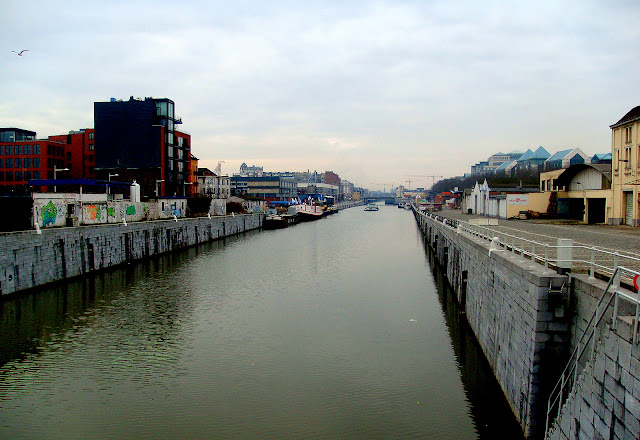 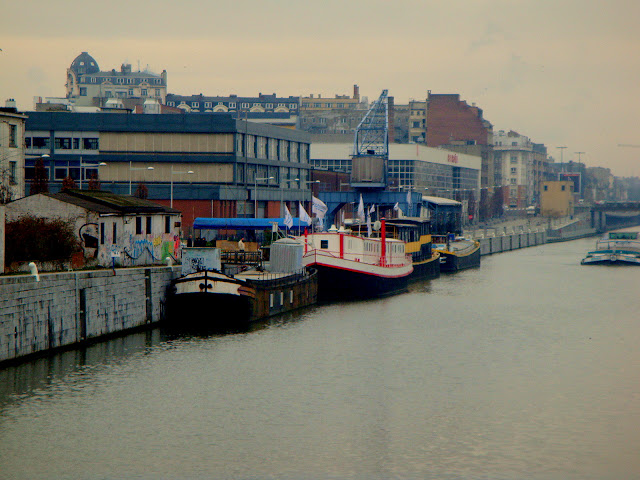 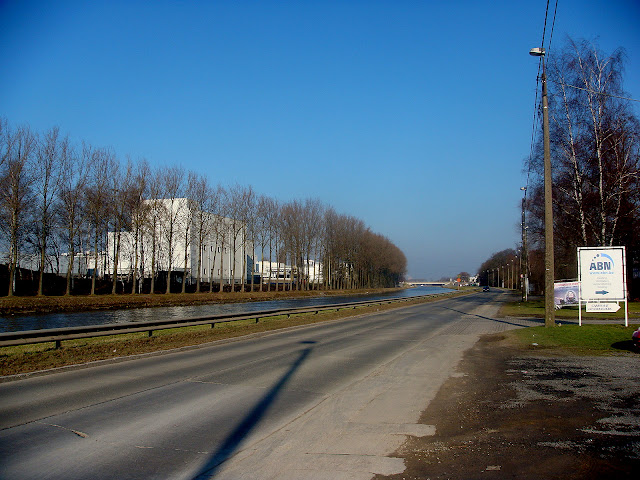 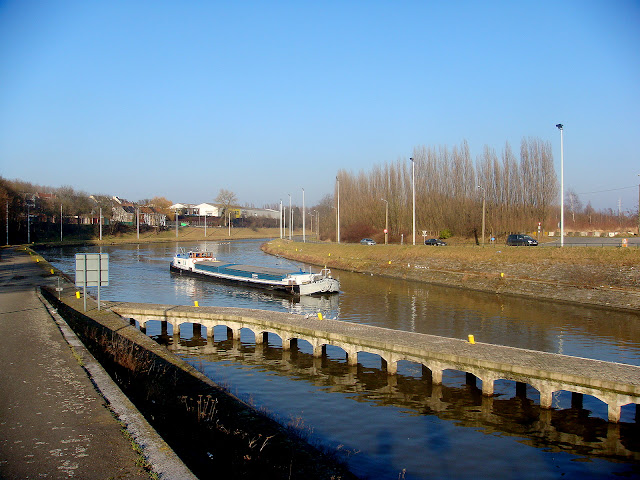 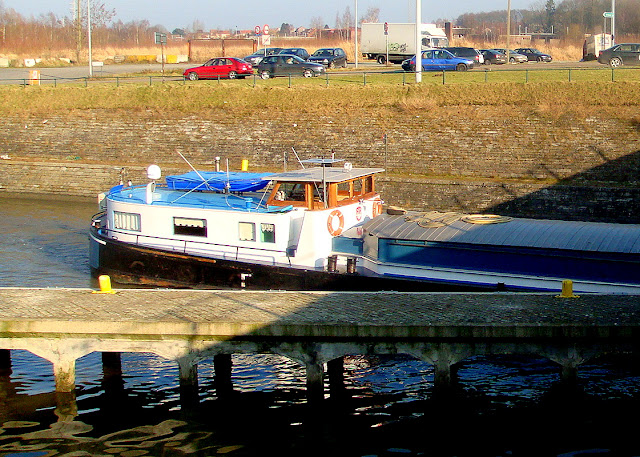 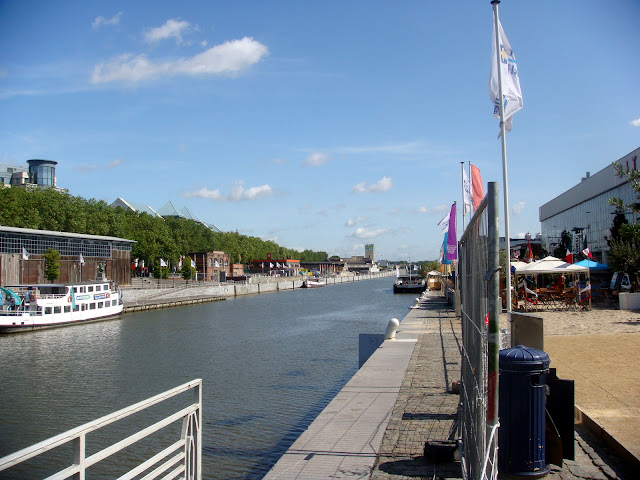 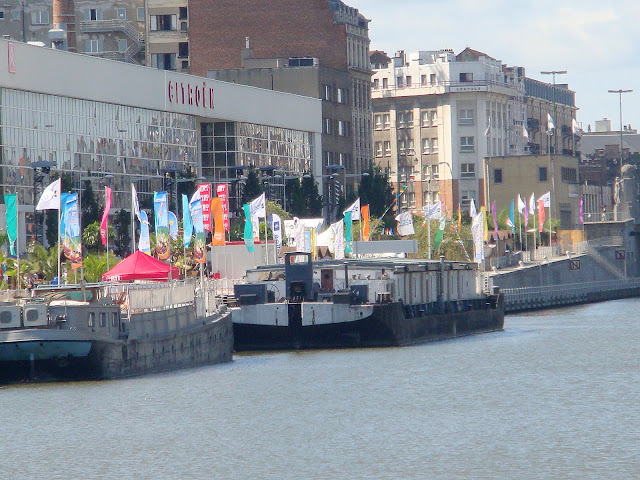 Helps you to remember what you have done on the weekend of February 23. If you participate please put the little logo on the top of your post and leave your link.

Mr. G. has hearing problems. That wouldn't be a problem for me if he would wear his hearing aids when he switches on the TV. Each day it is the same story, we quarrel, because it is so loud for me that I think my neighbor on the other side of the street would also hear the News ! I don't want to start my day with hearing bombs and gun fires, screaming "Allah agbar" and other noises related to catastrophes, when I am sitting peacefully at my computer and write only because he doesn't want to wear these things. In his opinion he doesn't need them, and when he wears them he complains that everything is so loud. This is the logic of a man.

A friend of my painting course has exactly the same problem, and solved it by buying a headset for her husband. Now he hears without disturbing the whole house and she can hear normally. The next day I bought a headset ! Saturday started with a Mr. G. who in his Italian way tried to fix the headset to the TV. After many Italian %µ&@" it finally worked, but not as we wanted, because with the headset on his ears he could hear perfectly but I didn't hear anything. The sound was cut off. He brought it back and bought another one, this time with explaining what we needed. 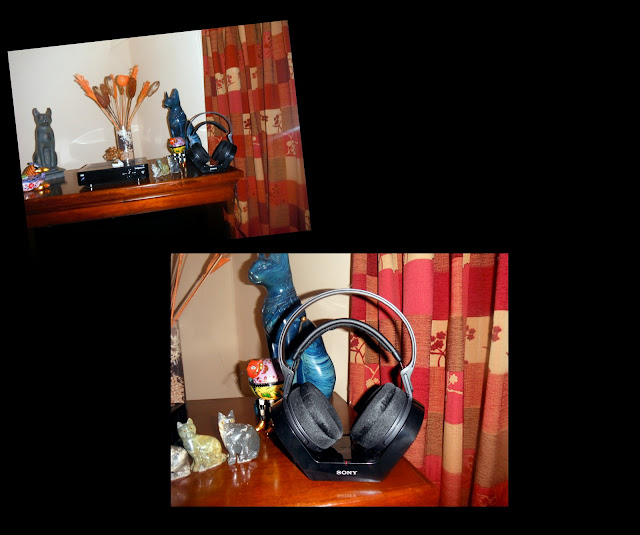 and here it is the savior of our marriage ! At least it should be, because the thing now, even loaded still doesn't work which puts Mr. G. in a very upset mood ! 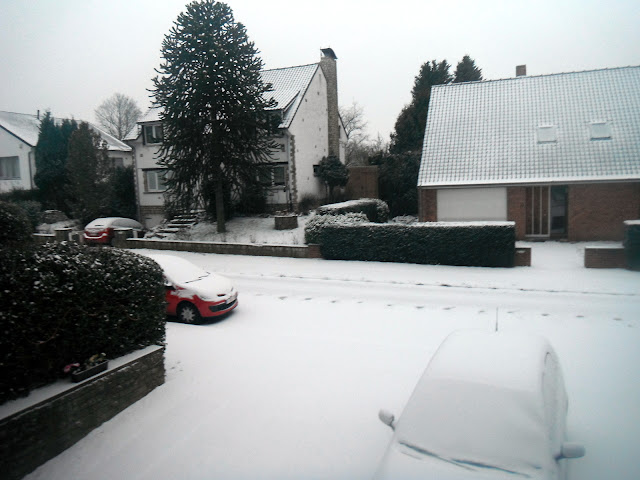 On Sunday morning when I opened the shutters I had this view ! I jumped back, forgot that I am supposed to be a Lady and pronounced a very bad word !  Does this snow last forever this year ??

Nonetheless, I had to go to the market in Brussels, because I had to meet my cigarette dealer supplier, to save more then half of the amount I would have to pay normally. My household budget appreciates.And I also wanted to escape the house while Mr. G. tried again to fix the headset. 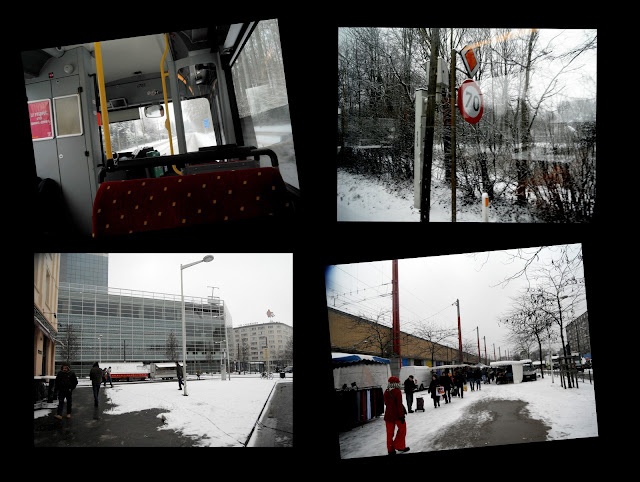 Despite the snow the bus arrived in time and I had a nice view on the snowy landscape. I had completely forgotten how ugly a big city looks in dirty snow, only the green squares and parks were nice to see.

I had never seen the Brussels midi market so empty ! There were not even half of the stalls which are usually there. Fortunately I had nothing to buy, but found grapes for 2 Euros for 1 kg. That was more then a good price. Then I went over to the café where I usually meet my cigarette man. He was not there yet. But 6 women were standing  on the terrace singing chants in Spanish and reading out of a bible. I thought this market is really full of surprises.

I entered the café where he usually comes in and ordered a coffee. When I turned around I saw 4 policemen sitting at the neighbor table enjoying a glass of beer ! Goodness me,  I thought, he can't come with all this police around ! I wanted to ask them when they would leave, but refrained of doing it. I emptied my coffee and went outside. What did I see ? my cigarette man, chatting with other clients. He made me a sign to go to the terrace of the next café what I did and I bought the cigarettes just under the nose of two policemen standing outside.  I took my bag, made myself taller then I am already, put on my posh face and past ladylike the two policemen. Of course with all the drug dealers they have to handle, there is no time for cigarette smugglers. It made me laugh and I returned to the bus stop and went home. It was still snowing !

Mr. G. shook his head in despair, but only formally, he knows his adventures loving wife. And then they are mostly for him ! As long as I don't steal underwear in shops it's OK.

He spent the rest of the day with the handset and I hid in my room !