1. Officially summer has arrived, but not in Belgium, maybe the sun is afraid of our terrorist level n° 3 on 4 ! So what to do than pottering around in the house, blog and watch TV ? It's too dark outside to take pictures.

2. Nicole popped in one afternoon together with Charlie, who of course as soon as Mr. G. had opened the door, ran in the kitchen to empty the food bowls of the cats ! We chatted a bit and complained about this awful weather. On top it was rather cold.

3. I had some doctor appointments for the yearly check ups, and got the results, everything is normal, which was very good news.

4. Finally it cleared up and the sun came out from time to time, enough to dry our grass, so that  Oscar could mow the lawn which had become dangerously high ! 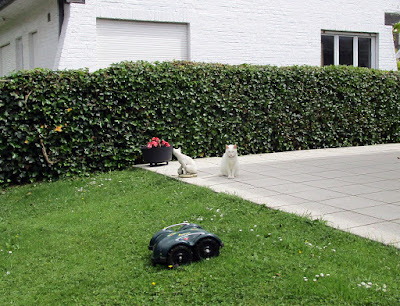 Arthur supervised. The temperatures had raised and I even could sit a bit on the terrace and also watch Oscar. What a nice invention !

5. It was very hot already in the morning which is quite unusual. I went to my Doctor and when I came out, the sky was black and it started raining and it cooled down so that I had to put on a jacket ! .
But not for long.

I met Nicole at Carrefour to have lunch together. The first mussels were in the restaurants and of course I wanted to try them out. They were delicious ! 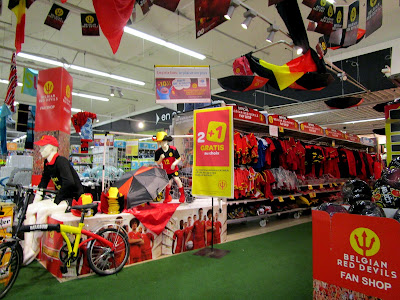 I was a little early so I made a tour around the shop and saw "red" a whole shop for Belgian football team accessoires.

During lunch time there had been a thunderstorm somewhere and buckets of water had fallen down, the whole parking was wet. Then the sun came out again full speed and we sat on Nicole's terrace.

When I returned around 6 pm it was still 30°C (86F) ! And then the whole night there were thunderstorms and heavy rain.

This morning I then heard that the UK will leave the European Union. That's very sad and also bad for the next generation. Now young British people could study and work in other European countries with the same rights, now they would need a work permit. And returning all the British EU employees to Britain will cost a lot and find them a new job ? And what happens to all the British companies abroad in Europe ? I think it will cost a lot of money to the UK ! Nobody here had thought that the majority was for the exit. My English friend married to a Belgian will probably loose her job because she works for an European institution unless she gets a work permit or becomes Belgian.

When I think think that when the UK joined the Common Market in 1973, I worked in an American company and we all feared that the English secretaries would take our job, because they had English as mothertongue and we had only learned it ! And now .... What a mess !

IF YOU ARE NOT A FOOTBALL FAN

Yesterday I had to go into the Waterloo center. Once Donald (Duck) Trump had said that Brussels is a hell hole! He can add Waterloo too, because I really had the impression to walk in the hell. Shops, windows, doors etc were all decorated in the national colors black, yellow, red, and with devils ! Lots of devils were also walking around. The Belgian Football (soccer) team is called "Diables Rouges" which means "Red Devils" would play for the Euro 2016 against Sweden.

A car with horns, usually there is also a trident around the window cleaners and the rear mirrors are also in black, yellow and red. 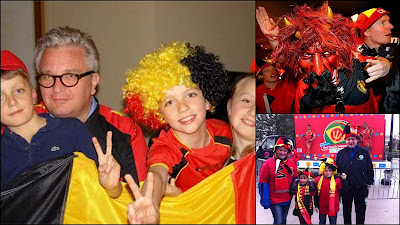 I saw a few people already dressed for the evening, the kids are the nephews of our king, I didn't see them, but took the picture from internet.

On Facebook's Waterloo page a list of bars and cafés etc was published who had a huge screen.

I returned home and decided to stay there and watch a film with Mr. G. Later on I read that Belgium had won against Sweden 0-1 ! I learned it because around midnight I woke up because of the noise of firecrackers ! Yes, I have to suffer because I am not a football fan ! I should have gone after the match and celebrate as a devil in the city !

The only good thing what football achieves, where all politician fail, is that for once the nation is all together, there are no Flemish and Walloons anymore, they are all Belgians ! On National day you only see very few flags !
Posted by Gattina at 08:32 5 comments: 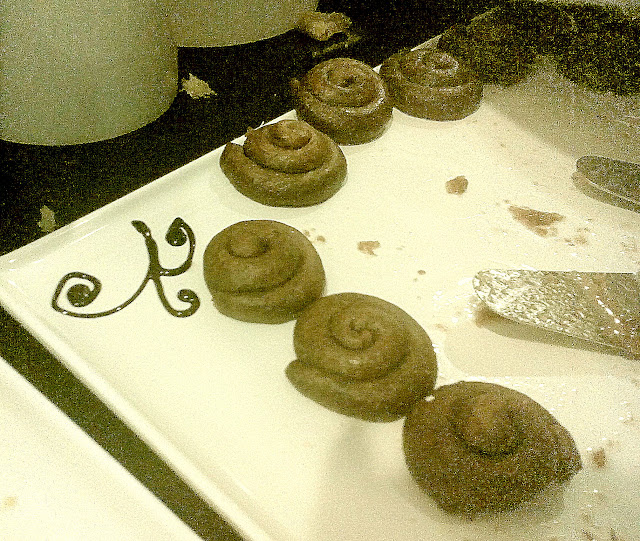 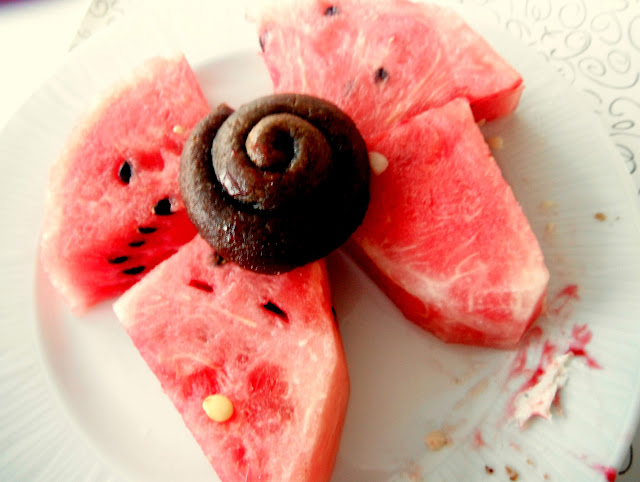 This weekend was the 200 and 1 anniversary of the Waterloo battle on June 18, 1815. If last year there were people coming from all over the world and poor Waterloo was completely lost to receive about 300.000 visitors, this weekend was exactly the opposite.

It started on Saturday. According to the program there should be shows and music with the soldiers at the Lion Hill. I went there at exactly 3 pm and was a little surprised ! 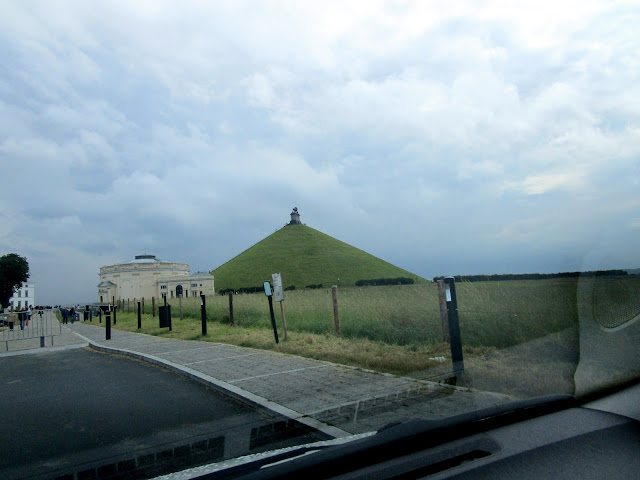 The site looked rather empty 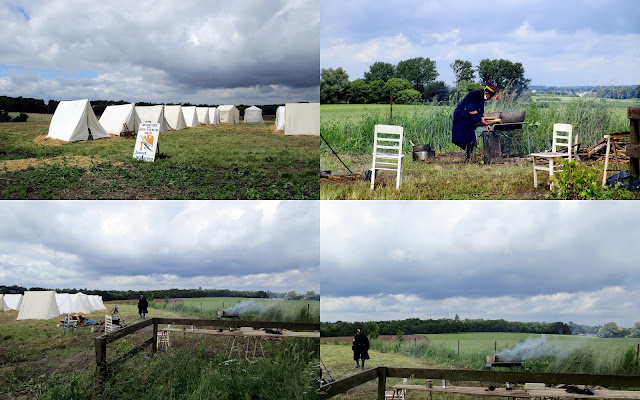 The bivouacs were behind a fence, so you had no access, they were all closed and I only saw one soldier who lit a fire. 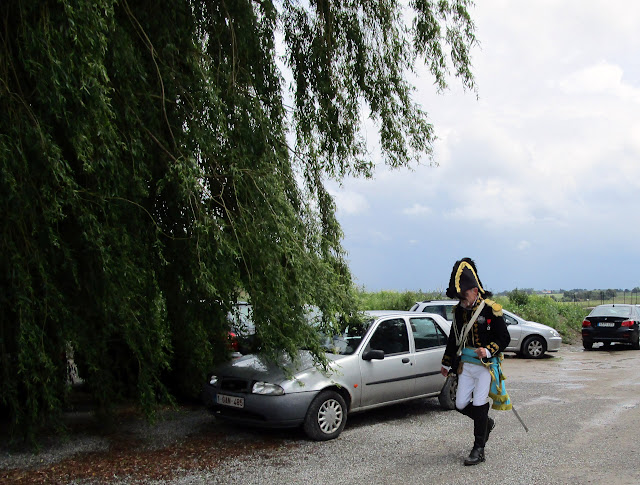 One returned to his car 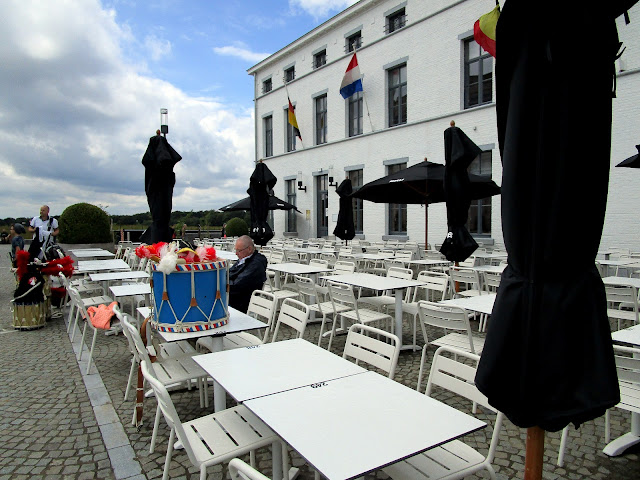 There was at least one visitor sitting on the terrace 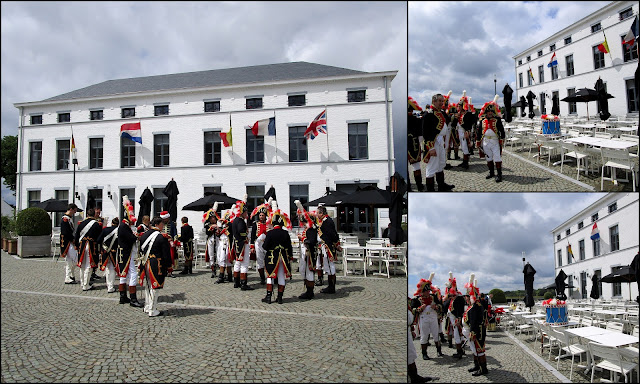 The French soldiers (musicians) were all standing there and chatted. I asked them when they would play, but nobody knew. Apparently the responsible was not there. 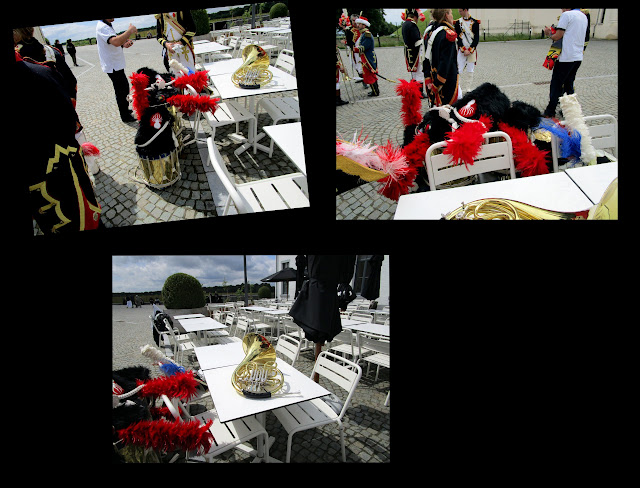 Their accessories were laying on the tables 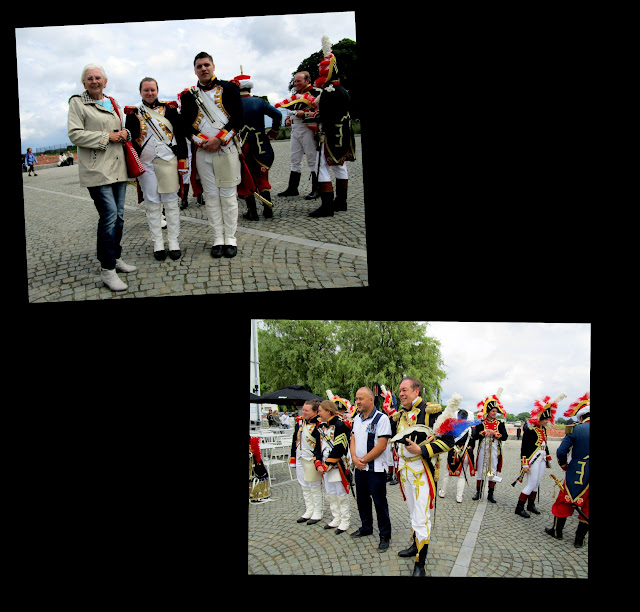 I met one English tourist who asked me to take a picture with him and the soldiers, what I did, and then he took one of me, and that was the whole events I saw !

I left and thought maybe there is more to see at the last head quarter of Napoleon. But it wasn't better ! 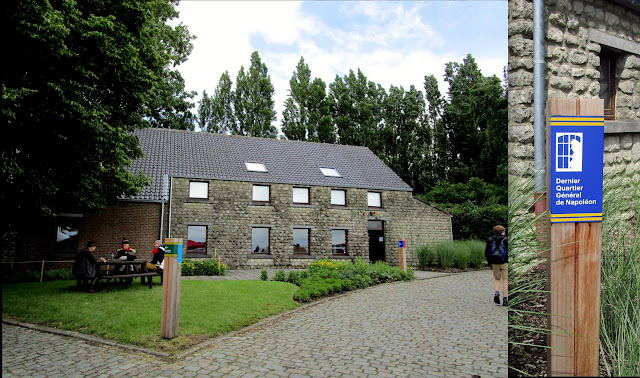 No people but three soldiers sitting at a table 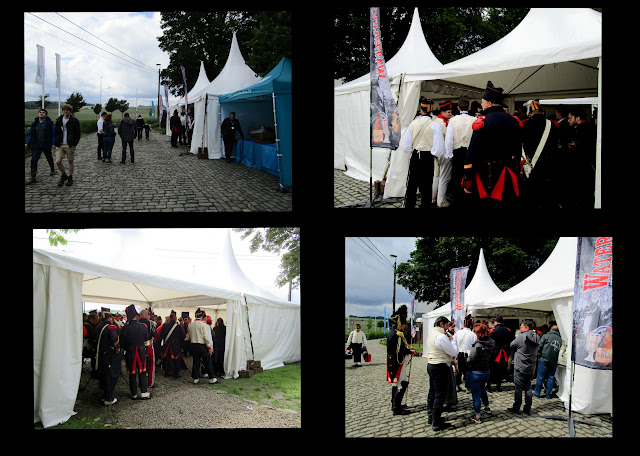 They were all gathered in this tent to watch the football (soccer) Euro 2016 game, Belgium against Italy, which is a very important event in whole Europe and further on ! So I could understand that as there were so few people they preferred to watch the match. Some tourists joined too. 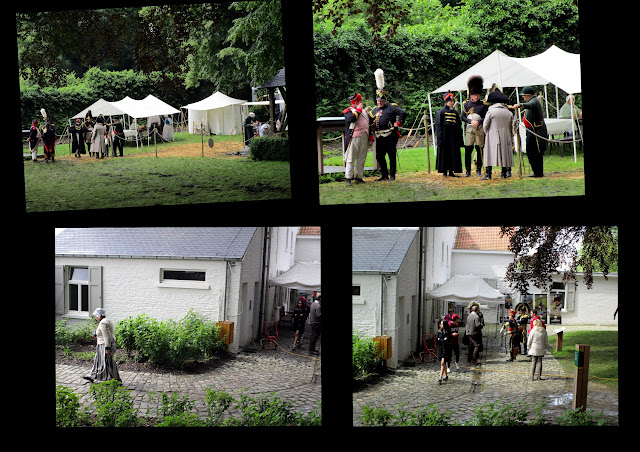 Then the shuttle arrived which carried the tourists from one site to the other, but there were not many people in there either. 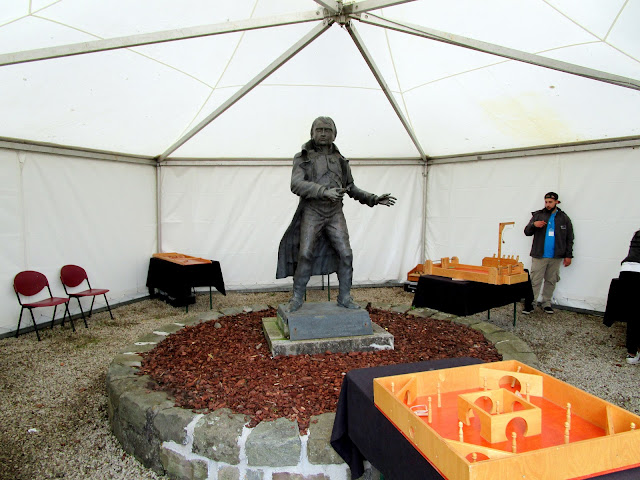 The "playground" for children ! Nobody there.

I gave up and returned home where I saw lots of people screaming and celebrating on the streets, 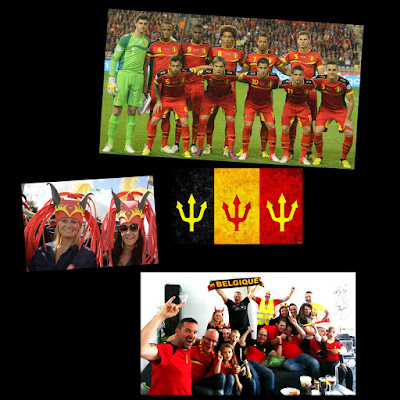 dressed as devils because the Belgian football team is called "Les diables rouges" (The red devils) and they had won ! This turned the whole country crazy !

Nicole and I returned to the battle field on Sunday. Again according to the program for the whole day there was something to see and we wanted to see the horse show at the Hougoumont farm. At the Lion site there were people sitting on the terrace and not a single soldier in view. In short there was nothing unusual besides the few bivouacs I had seen the day before.

I took the shuttle to the Hougoumont farm with mostly English tourists. 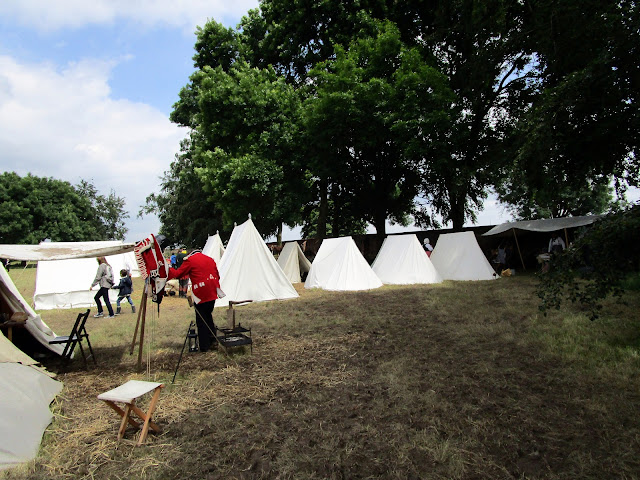 The British bivouacs could be visited only the soldiers had disappeared or were packing their stuff, and it was only 3.30 pm. So I supposed that the day had been very successful ! 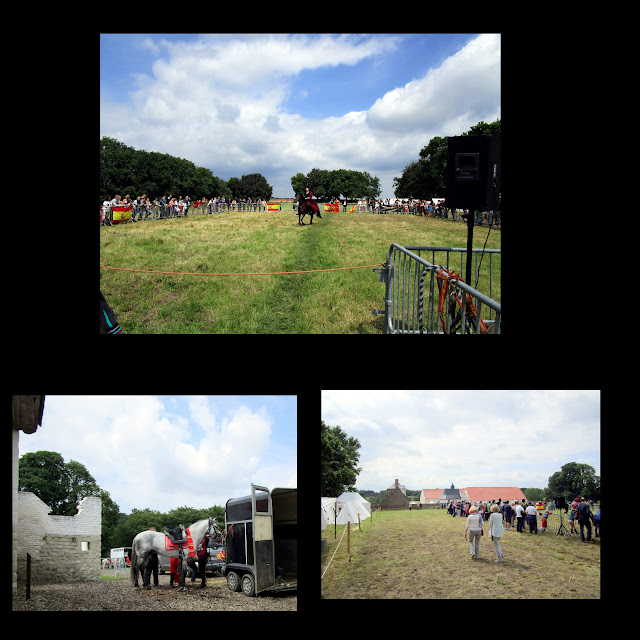 The horse show too was disappointing, instead of seeing a show with the English or French or whatever cavalry there was a Spanish horse show ! I was disappointed and returned to my shuttle. I was not the only one.

We decided to try our luck at the Mont St. Jean farm, where folk dances should take place and also a guided tour through the new museum. 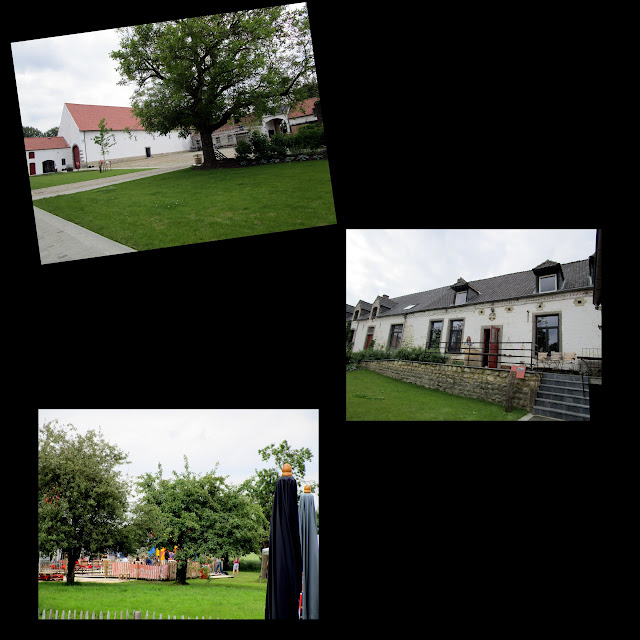 Fortunately the restaurant is nice and we sat on the terrace and had a drink and looked at the beautiful views. 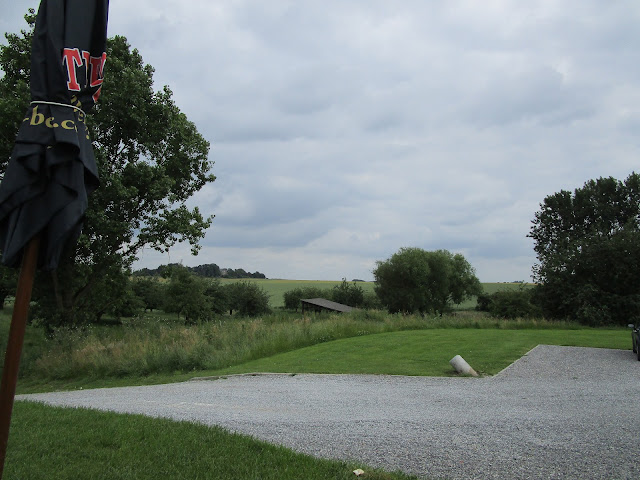 We thought that it would have been far better not to make programs if they are unable to respect the schedules.
Posted by Gattina at 09:10 8 comments: