1. 5 of us had decided to meet outside our painting group and I was the first one where we met. Unfortunately two couldn't come so we were only 3, but that didn't matter, there were enough things to talk about.

Nicole wanted to get rid of her kitchen furniture, because she had ordered a new one, and Chantal is expert in selling things not only on eBay but also on local sites. 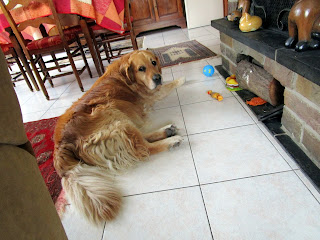 I had bought a new ball for Charlie, and he had already found it before we could sit, I have a few toys for him besides the logs under the open fire. This kept him busy the whole afternoon, while we had to deal with the squeaks of that ball.

2. It is still summerly warm, cold in the mornings and in the afternoon up to 24° ! So I have to dress like in winter and then take off layer by layer ! I went to Nicole to help her with the advertising for her kitchen furniture and we first could sit on her terrace before it cooled down and we had to go inside. Now the advertising is done and she has to wait.

3. I had ordered an inside outside thermometer, which arrived and of course I had ordered the wrong one. There was no unit to put outside but a cable. Impossible to let hang out the cable through the window, can't live with an open window the whole year. I called them and they told me that I just have to give it back at a special pick up point and I would get the money back.

4.  I went to the pick up point the next day and they didn't know anything about it. I insisted that they called, the girl who was responsible, was really a little stupid, but at the end I was told that I need a return document. As I was already in the city center, and it was so warm, I bought myself a nice ice cream and sat on a bench. There are benches all along the main street for tired shoppers.

After the ice cream and watching people, I had a coffee on the terrace of a café and met the director of the theater where we have a season ticket. He was hanging in his seat and seemed to sleep ! But he must have heard me because suddenly he woke up and excused himself, he told me that he is now retired, doesn't play anymore and that he comes here each day to sit in the sun ! It's a pity that he is too old now, because he was excellent as actor.

5. In our painting group a man showed up and started to look at our paintings, made compliments and went from one to the other. I had never seen this guy and the others neither. It turned out that he came for an insurance from a Christian Union and started to make publicity for his party ! Poor man, he never thought that he would face 15 suffragettes, who told him that we were all kind of religions or no religion at all, that we are insured and that we are artists and don't want to have to do anything with the stupid politicians he praised. We were so nice to him that he escaped quickly and we laughed our heads off for at least half an hour. I think the guy will have nightmares !

more participants here at FIVE ON FRIDAY
Posted by Gattina at 07:00 22 comments: 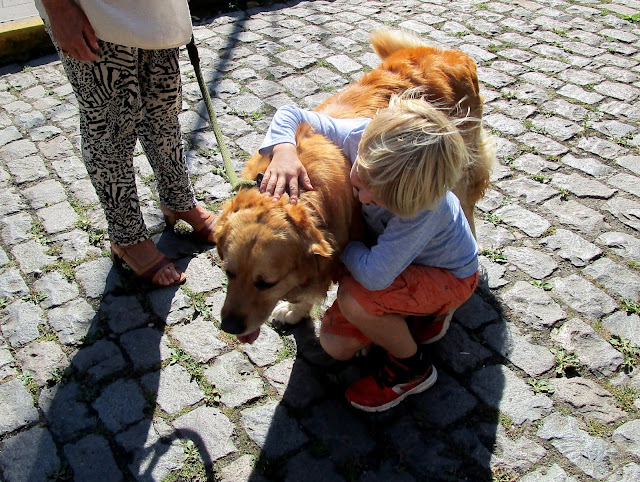 A little boy met Charlie on the market


1. Have you ever been to and/or lived near the desert? What did you think? Travel and Leisure lists the 'coolest' American desert towns as-Palm Springs CA, Virgina City NE, Bend OR, Winslow AZ, Marfa TX, Grand Junction CO, Silver City NM, Moab UT, Taos NM, Yakima WA, Borrego Springs CA, Terlingua TX, and St. George UT, and Tubac AZ
Have you been to any of these? Would you like to visit a desert town? Which on the list would you most like to see?

I don't live in the States, but I have been into deserts in Tunisia, Turkey, Morocco and Egypt  watching a sunset on a camel's back it was wonderful ! I have also seen the painted desert and some more in the States on visits.

2. What's a plan or project you've deserted in the past year?

A cruise to the Northpole

3. Desert-dessert? Share two or three words you find yourself having to think twice about when it comes to spelling.

4. High and dry, like watching paint dry, dry run, dry as dust, not a dry eye in the house...which phrase can you relate to currently? Explain.

I have to wait until my painting dries,  to continue and put another layer on ! Usually the occasion to have a chat with my classmates.

5. How often do you frequent the dry cleaners? Starch or no starch?

Never ! I don't have a single cloth in the house which needs dry cleaning !


6. What's a food or beverage you enjoy that's named for a place?

7. Do you need solitude?

I like Ittre very much and as there is also a very nice theatre I have a season ticket there. In Ittre it seems that the time stood still. The houses remained unchanged, and the little streets have still their cobble stones which makes it so difficult to walk with high heels. The people there are especially friendly and open and always have a little joke ready. Read more here

We had our monthly Facebook meeting of our group "Vivre à Waterloo" (living in Waterloo) this time in a bigger Tavern. There are more than 2000 members in this group, but of course they are not all coming. Usually we are between 20 and 40, this time we were probably around 20. This was my 3rd time and I start to know the people I only new on the "wall" ! 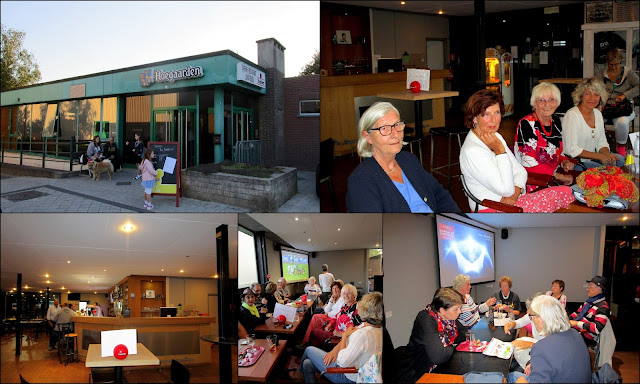 The Tavern from out and inside, Nicole is member now too and came with me. We had a lot of fun and spent a nice time together. Around 9 pm everybody left.

We still have summer weather and I purr ! There was a autumn festival in a little very cute town near Waterloo called Ittre. It still has all the old stone houses and cobbled narrow streets. 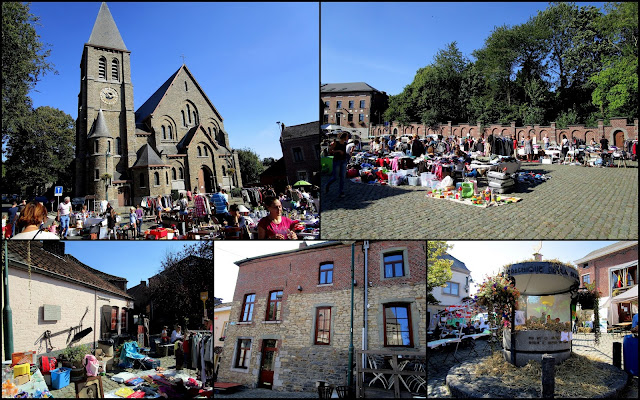 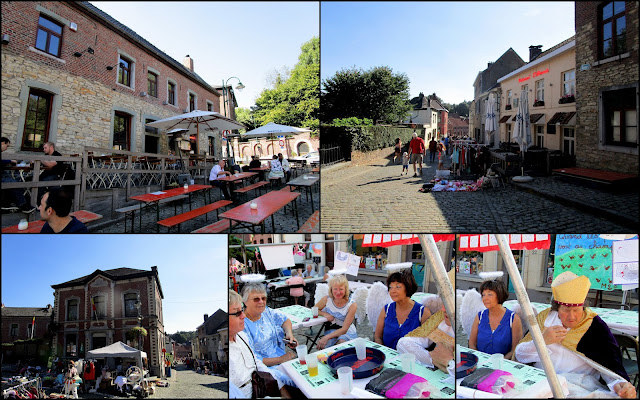 There were also little theatre plays and apparently one with angels and God, who had a beer here ! 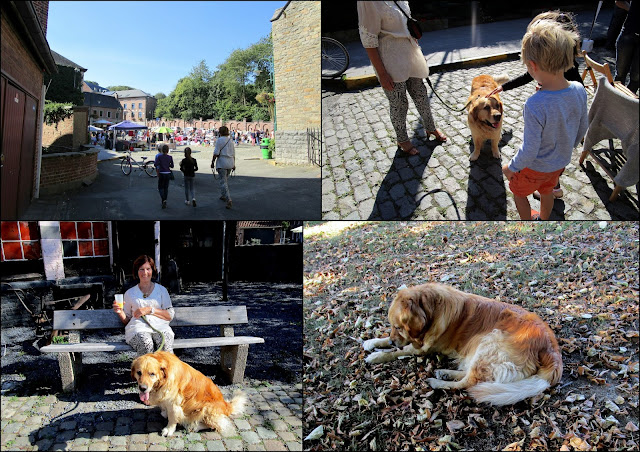 As usual Charlie is always the star, even if there are other cute and friendly dogs. He has a special charisma ! As soon as we arrived Nicole was followed by kids During our walk around the town, we were stopped and asked about Charlie, so finally we had a very dry mouth and went to the place with the church and had a nice cool beer there. Of course Charlie was thirsty too and the waiter brought him a big bowl of water. There too two ladies started to talk with us because they also had Golden Retrievers and then others joined in the conversation. It was a real nice sunny afternoon.

Sunday was the last sun day ! We had always wanted to see the city in the city which had been built
in Waterloo on the 15 hectares surface of a formerly Farm school.

I have passed by the entrance of this school a thousand times and  had never realized that its surface was so huge, that so many houses, a retirement home, a medical center, a swimming pool, a restaurant etc could be built ! 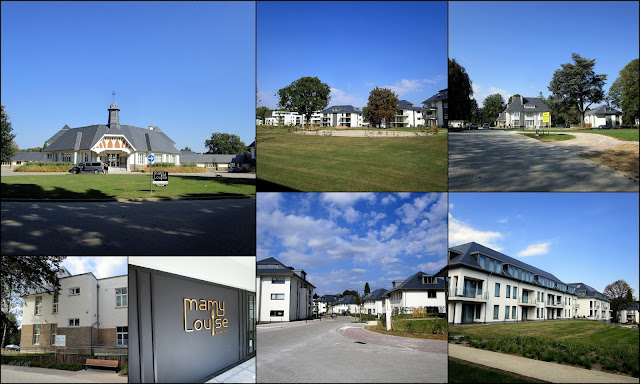 I didn't like it. It seemed to me like a posh ghetto without soul. The house and apartment prices are horrendous, and there are still a lot of houses and apartments for sale. No wonder.

The only thing we liked was the restaurant called Mamy Louise, that seemed very nice and next time we go out for lunch we will go there.
Posted by Gattina at 07:00 9 comments: