ABOUT MY TUNISIAN ROUNDTRIP

"When we had left the Amphiteatre El Djem we drove to our next stop Matmata a small Berber town in southern Tunisia. where some of the local Berber residents still live in traditional underground "troglodyte" houses.....

Before I forget everything about my trip through Tunisia, I wrote a post on my Country & City blog here 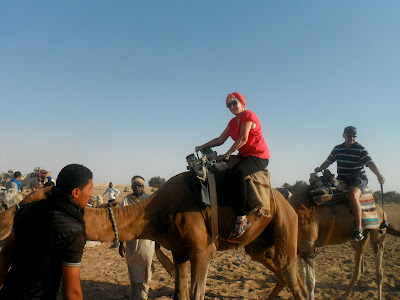 1. On Monday I played Sunday and did nothing special besides sorting out my Tunisia pictures, put them on USB keys for my friends, watched TV and peeved about the weather.

2. As Belgium fell into its yearly  summer sleep because of the 2 months holidays, we don't have our usual activities and have to follow the school hollidays, although we don't have kids to go to school. Lots of companies are closed and the streets look empty. Except tourists, there are always a lot in Waterloo to see the battle field. 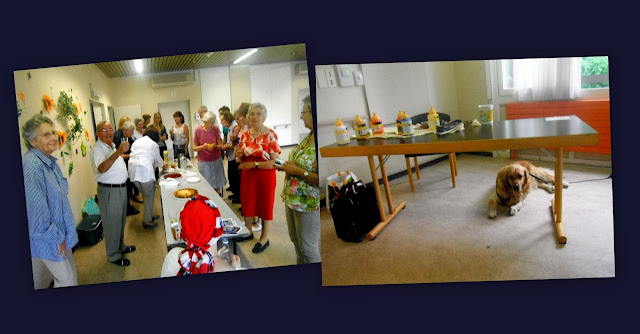 But we still had one painting class and celebrated the 80th birthday of Gerry the one with the water glass filled with champagne ! Dog painter Charly waits for cake.


3. Therefore we have a lot of time which we fill in with meeting each other. Dominique came over for a chat and took my Tunisian pictures, she had bought two yellow canaries to replace the two little birds my cat Arthur had killed while they were "on holidays" with Mr. G. He (Arthur) had opened the door of the guest room ....

Arthur in a Pow Wow with Rosie 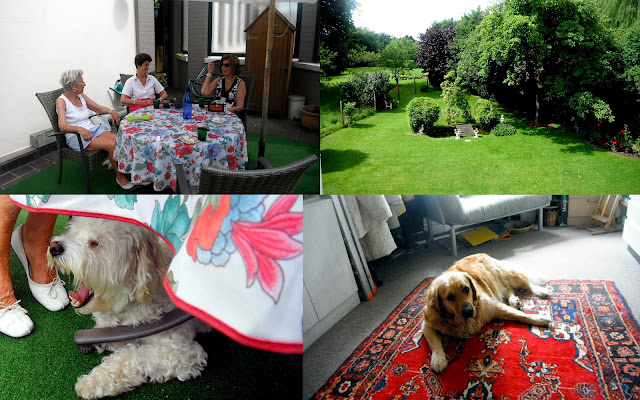 After a nice lunch in the "Jardin d'Asie" (Garden of Asia) we had a coffee on Nicoles terrace. Her neighbor joined us with dog Sissi, and we had this beautiful view on her garden. Nicole's appartment is just on the second floor. Sissi got bored listening to all this chatting, and Charly, Nicole's dog prefered to stay inside where it was cool. For once we had a hot day !

5. Since 3 years I have tried to see the Ommegang pageant a re-enactment of celebrations marking the historical entry into Brussels of Charles the Fifth in 1549. But it always rained. This time it didn't rain, it was grey but very warm. I took pictures of the afternoon events, the real show starts at 9 on the Grand' Place in Brussels, but I found it too late for taking pictures. So I just enjoyed the preparations and saw the competitions of the chevaliers. 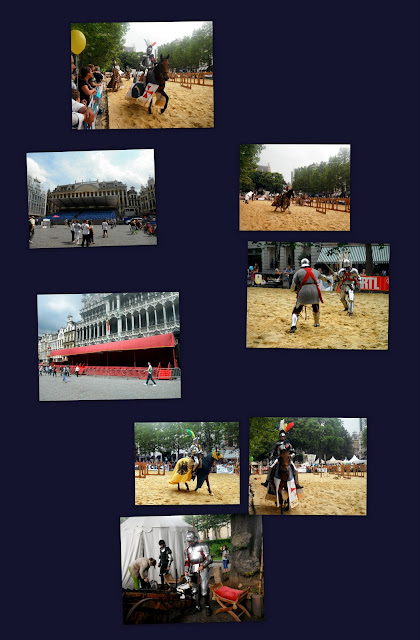 TRAVELLING WITH A GROUP

When you go on a round trip through a country you travel with a group. The first time you see the people of your group of course you don't know them. What happens, we behave like a group of dogs which meet for the first time. We sniff at each other. Not really like dogs do and certainly not the back part. No, we do it with our eyes. We watch each other from top to bottom and then decide if the men or woman look sympathic or not.

What I do is giving them a name. I rebaptize them with adequate names. So in our group was a "Skinny Minnie" (she was anorexic I learned later), a Madame De Wever, named after the fanatical Flemish politician, the Morrocan guy, etc.

All in all our group was nice except it started with "Madame De Wever" who wanted to make a language war trip and insisted that everybody spoke Flemish/Dutch ! All the other Flemish people didn't care they all spoke French anyway and most of the others spoke the two languages Flemish and French. This language war gets on my nerves especially on holidays ! How can one insist to speak a language which isn't really a language but a dialect and travel with that through the world ! She even complained that in the famous museum of Tunis "Museum Bardo" the young female guide didn't speak Flemish/Dutch !

I told her in German that unfortunately I don't speak Flemish (which isn't quiet true) she didn't understand although it is the third official language in Belgium. I tried it with English. All Dutch people speak English, because they are intelligent and know that with their Dutch they won't go far except in little Belgium. She didn't speak English either. I suggested her (in French) to learn it because she needed a language to communicate and not to make language wars. Her husband standing behind her rolled his eyes to heaven and gave me a glance. Suddenly she spoke French ! What a nut ! After that she was very friendly with me and even looked for my company.

In a group you always have several kinds of people, the once who follow blindly like sheeps their shepherd without asking a single question, others who ask and ask and get on the nerves of those who don't want to know anything. And the once who go aside to make pictures and read afterwards what they have seen in their travel guide. I belonged to them. Our guide was so stupid, had black outs, mixed up history and didn't know in which language he explained.  He whined his behavior to some group members with the fact that he had had a cerebral stroke ! I only hoped that he didn't fall into pieces and that we, the group had to take care of him. It really was irresponsible of the company to hire such a guy !

Sometimes in a group people are always late and make the others wait. In our case as the guide forgot the time we should be at the bus, gave one time and the driver another. That made it very confusing, because one part followed the driver's time and the others the guide's. Therefore one part always had to wait for the others ! Fortunately that happened only twice, at the end when our guide fell into pieces because of the heat !

Travelling with a group is always an adventure. So far I was always lucky, even made friends. This time it was nice too, but there was nobody in the group I really wanted to meet after our round trip. 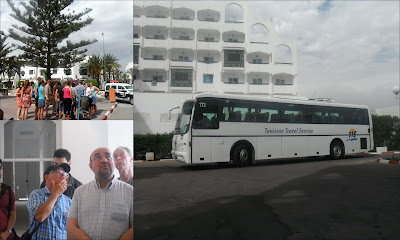 The bus, the group and the clueless guide on the round trip through Tunisia 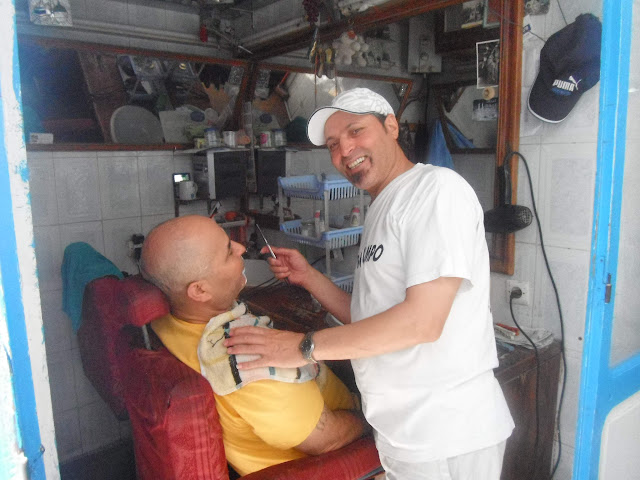 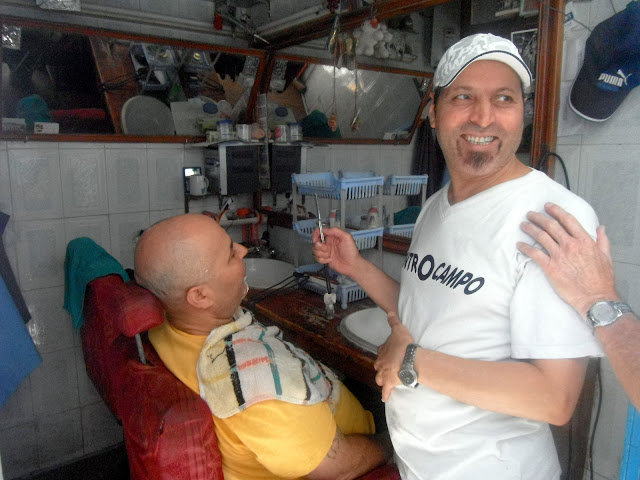 I just came back from a round trip through Tunisia, which we did in a comfortable bus with a very good driver who also served as guide when the official guide didn't know ! 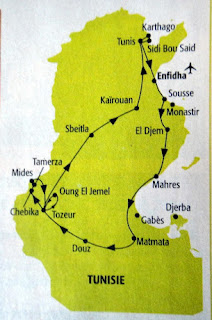 During my holidays in Tunisia my old Nokia mobile phone broke down, and gave up its soul. Fortunately I was still reachable through Dominque's mobile and I also had my notebook with me and could call via Skype.

First thing on Saturday was looking for a new one. I wanted to have one which you can close so that you don't have to lock the keyboard. I needed a very simple one because I only use it as telephone and for sending sms. I don't need anything else. The only model available which closes was the Samsung E 2530 mobile. There were only black once, I wanted a red one. So I looked through all the little boxes and ... found the only one in red called "La fleur" which means the flower. 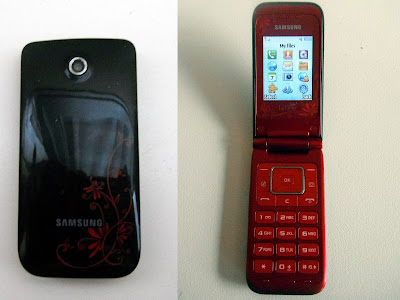 It looks very elegant and has far more options than I need. Even Bluetooth and I can take photos, which I never do, and all kind of other stuff. It works well and I am happy with it !

Dominique had also a little Exposition in her living room, of the pictures the children painted in her painting class which she does every Saturday morning. 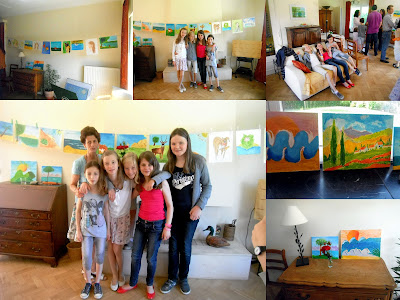 It was interesting to see what beautiful paintings these little girls have done, they are 8 to 11 years old. Some paintings are better as the once I see in my painting group with the old ladies ! The proud parents were also present of course. 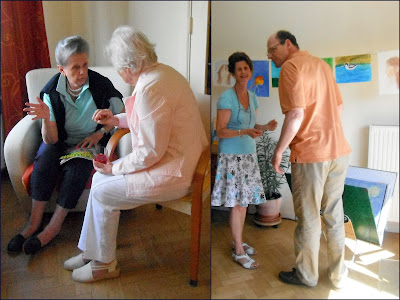 Dominique's mother was there too, she just had celebrated her 90th birthday, she really looks very good. She raised 5 boys and one girl ! She was chatting with a neighbor, who is at least 20 years younger. Dominique explained the paintings to a Daddy.

In the afternoon I went to Nicole and together we sorted out the pictures we had taken in Tunisia. She had some I didn't have and she took all mine. The sun was shining and we could sit on her terrace and have a coffee.

Sunday where everybody should rest I did my laundry while I also answered emails. The only thing I had to do was to fold it and put it in the closets ! Hard work !

Mr. G. had a friend visiting him, so I escaped to Ilona so that they could have a man to man talk and I had a lot to report to her about our trip to Tunisia. She showed me pictures of her little great granddaughter ! and I am just a grandma at the same age !

Labels: children painting expo, Samsung E2530, What did you do this Weekend 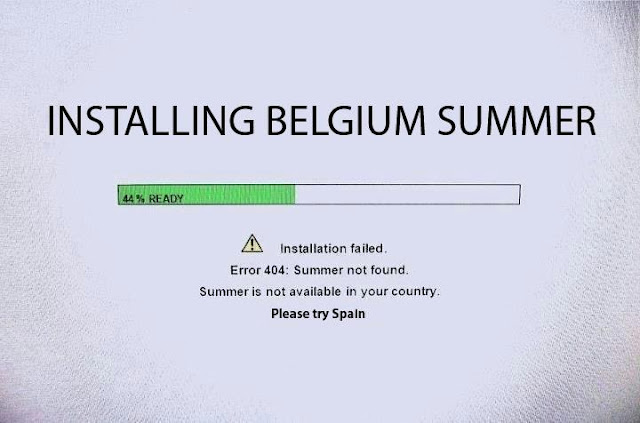