Another week went by still with sunny weather, not too hot fortunately, but I start to cry for rain ! Everything is so dry.

Today is a rather sad day for me because it is now 2 month that my "plant holder" passed away and let me be the plant without support. 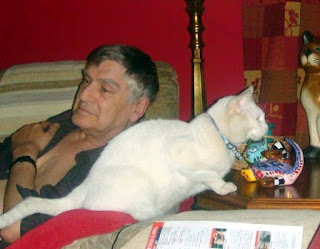 But life continues and hopefully time heals a bit.

For my birthday I had offered myself a new tablet, normally it would have been Rick but anyway I always had to choose what I wanted myself, except when it was something neutral like a cat figurine.

I started the week by trying to configure my tablet. It went quite smoothly until I came to the pictures they were all negatives and I had a black face with white eyes. Rosie's colors had changed too where she was white she was black and the other way around. Whatever I tried it didn't work. Then I wanted to install Whatsapp, which didn't work, and there was no Facebook on the tablet (strange) ! When I became the feeling to throw the tablet against the wall, I went to the shop and asked for help ! A young man managed to make me and cat Rosie look normal again, managed also the Facebook but then when it came to Whatsapp, no way. He called a colleague who seemed to be a bit more used to the Samsung tablet. But even he, although he tried everything possible with the result that I lost a few conversations on my phone, finally gave up. He told me that it was impossible to have Whatsapp on two devices. At home I googled apparently that's not true, but for the moment I gave up !

The day ended with me stumbling over my own feet, pulling the curtain with me as I fell. I picked myself up and was about to collapse onto the sofa in the living room, but I couldn't,  unfortunately Rosie had used it to puke on.  What a day ! 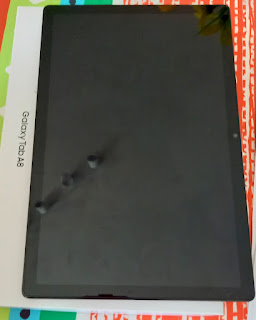 I am happy with my new tablet, now I am waiting for the case.

The next day I spent mostly in the waiting lines for different services, the longest was to get rid of my fix phone only that and nothing else, but of course they tried to convince me to keep it and even made an offer for a mobile ! I told the guy that I don't need the phone anymore because the only person who called me with that was my sister in law in Italy, but now she doesn't call anymore it's my niece on .... Whatsapp. Finally I had my fix line cancelled from August 1st on.

In the apartment above me another widow moves in, I haven't seen her yet only saw her furniture moving slowly up in front of my window. 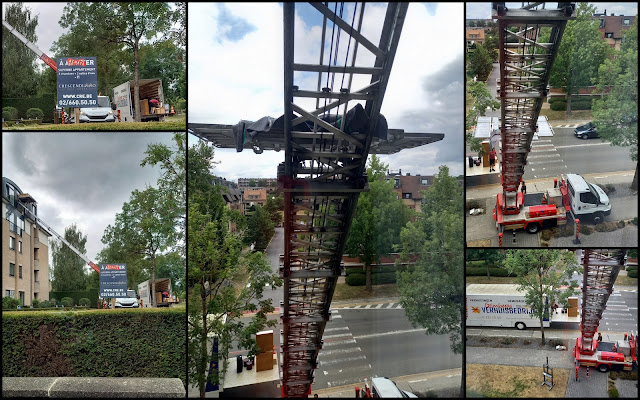 I saw an easel standing on the sidewalk, which draw my attention, hopefully I will find a creative person as neighbor, so far I have one which is only interested in sport and each morning runs for her life and only watches sport things on the TV. The other is cooking the whole day which is not my thing either, a part from that they are very nice.

I don't know why but I wanted to look for a summer dress. Of course I found nothing and had to go for lunch in my "old" things with a couple and another widow, which I knew from our Facebook meetings, and who are so very kind to me. 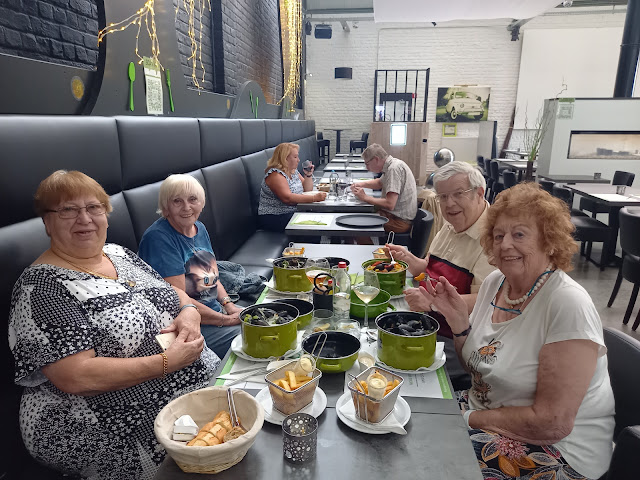 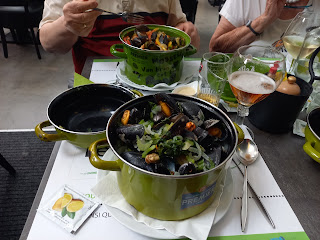 These were the first mussels of the season and they were very good. It's not always the case it depends the years, apparently they like the climate change. We had a lot of fun and laughed a lot which really did me good. The waiter and the owner of the restaurant were friends of the couple and teased them all the time. When we had finished this Belgian "national" plate, there was just room for a good strong coffee, and then we returned home and apparently fell all asleep in front of our Televisions !
The week ended with shopping, I needed fruits, in the shop where I usually go they have little boxes with different already cut fruits, and I love this as dessert. I was again without energy and had breathing problems, it's a mystery ! One day I have it then several days not or even months.
The last week I had nothing. Anyway I had to go for a little check up to my female doctor, who found me in good health a part from the breathing problems I have nothing physically, she said that I am too sensible and worry too much. Which is true, if it doesn't go better with the time I think I have to ask for professional help. I wait until the summer holidays are over because for the moment lots of people who come and visit me usually, are on holidays.
To cheer me up, when I came home I found the summer dress which I had ordered online finally had arrived, I tried it and it fitted perfectly ! 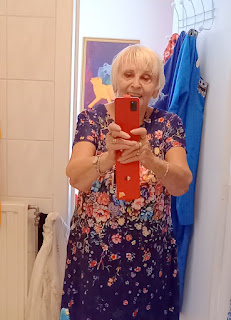 It's a long dress because it is in fashion now ! To make a photo of yourself it's a bit difficult if it's not a selfie !

more participants at Susanne at Living to tell the Story.
If you have difficulties to comment, just scroll down to :
Subscribe to: Post Comments (Atom)
click on it and then you can comment !
I have the same on other blogs and it took me quite some time to find out !
Posted by Gattina at 10:50 6 comments: 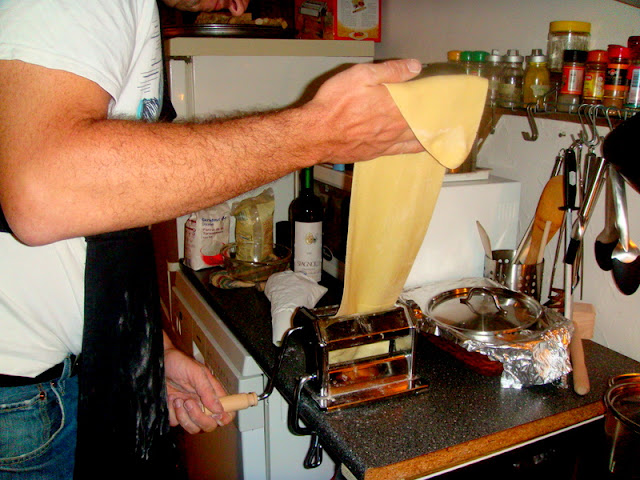 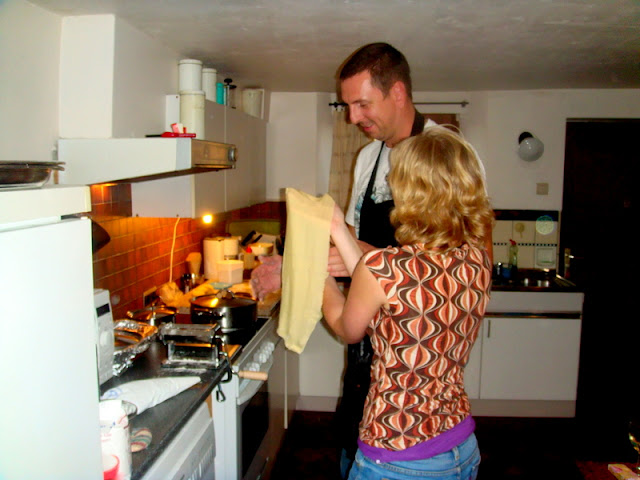 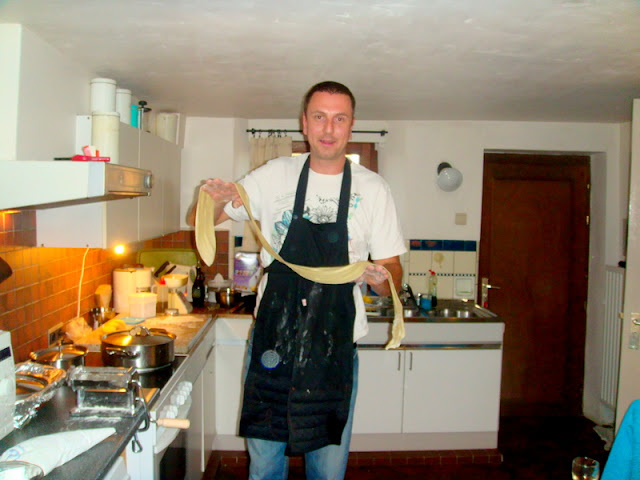 My son making Lasagne with his wife as assistant

If you have difficulties to comment, just scroll down to :

Subscribe to: Post Comments (Atom)
click on it and then you can comment !
I have the same on other blogs and it took me quite some time to find out !
Posted by Gattina at 07:00 4 comments: 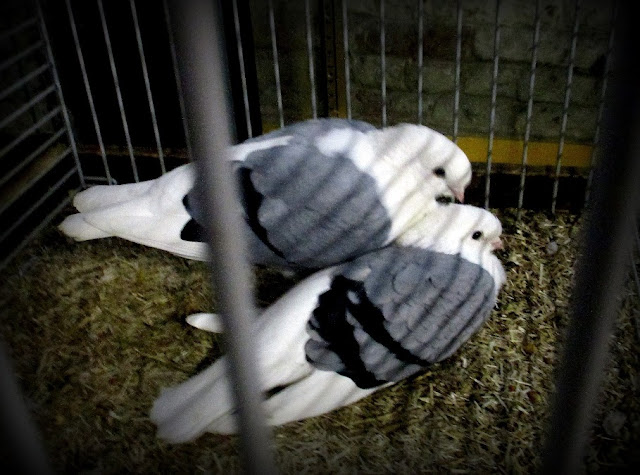 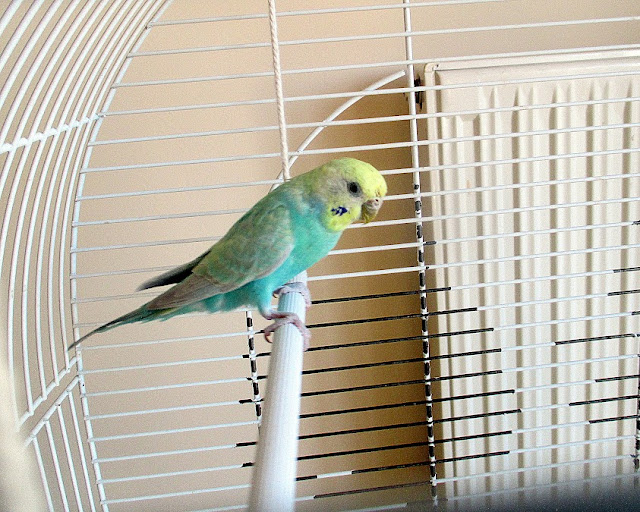 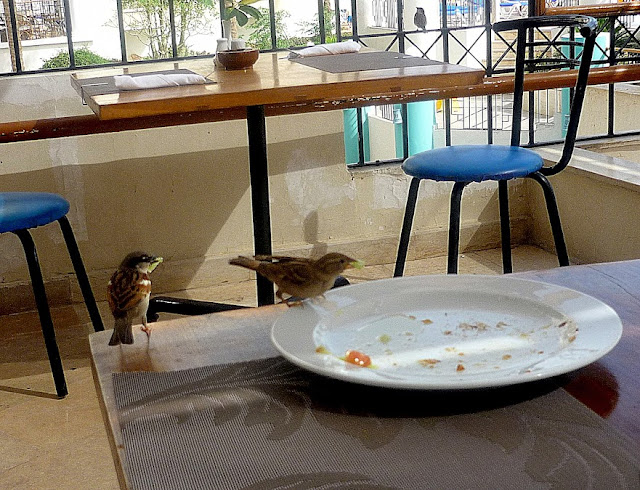 On Saturday I woke up at 7 and thought it's a bit early to get up. I took my Kindle and started to read a bit and suddenly the tablet was on my belly and it was 9 am I must have fallen asleep but was convinced I hadn't.

It was warm and sticky outside and I had my breathing problems which I didn't have had for a long time. I worked a bit on my computer and after lunch while I watched my short crime story I fell asleep again ! Now it was getting warmer and warmer. I took my car and went looking for a new tablet, because mine is a very old Kindle I think I got it in 2014 from my son for my birthday.

It was nice to drive also for my rather sad mood. I noticed that driving around calms me down and makes me feel better. That's rather strange because most of the women I know once they approach or are over 80 don't want to drive anymore. Apparently as usual I do it the other way around !

My son is in Sardinia and sends me pictures of what they see and do, which makes me happy because it feels a bit as if I am participating too.  Below is a little video of Toby and his Dad who for the first time tried snorkeling  !

On Sunday another heat wave was announced ! And unfortunately the weatherman was right, we melted again ! But this time I didn't want to spent my day in the living room with closed windows and curtains to keep the heat outside as they do in Italy, I called a friend and asked her if she want to come with me for a "walk" around the lake Genval nearby ! She answered that I was crazy walking in this heat ! But when I told her that I let my car "walk" and we sitting inside nice and cool, she immediately agreed ! And we drove about 20 km to the lake and then around and I took a few pictures out of the window.

Outside meanwhile it was 32°C and nearly nobody outside and the terraces of the restaurants were empty, too hot ! 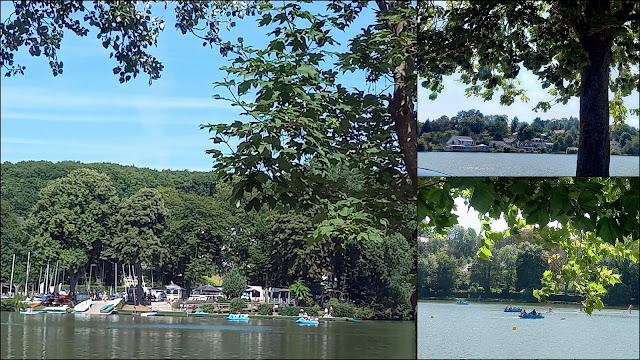 It was really nice to drive around the lake and watch the boats and some people swimming.  When we had made the tour, we drove back home, but not right away, 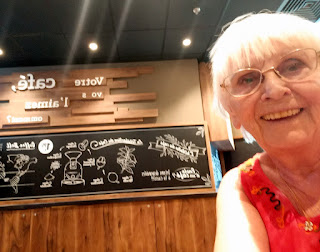 we stopped in the café of the Carrefour market which was air conditioned sat down and had both a refreshing drink.

Satisfied of our day I drove my friend home and returned home too.