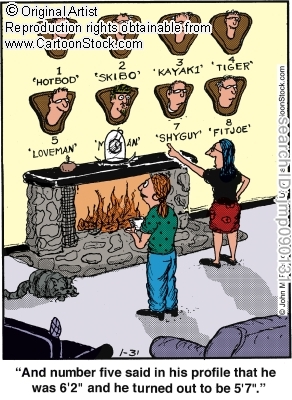 1. On Monday I pulled all my courage together to go shopping for the most essential things, like toilet paper for example. Our street was still covered with snow, as it is a little street and mostly forgotten by the truck which grits the roads with salt. I had to drive very carefully like on a skating ring, fortunately the main road was cleaned. 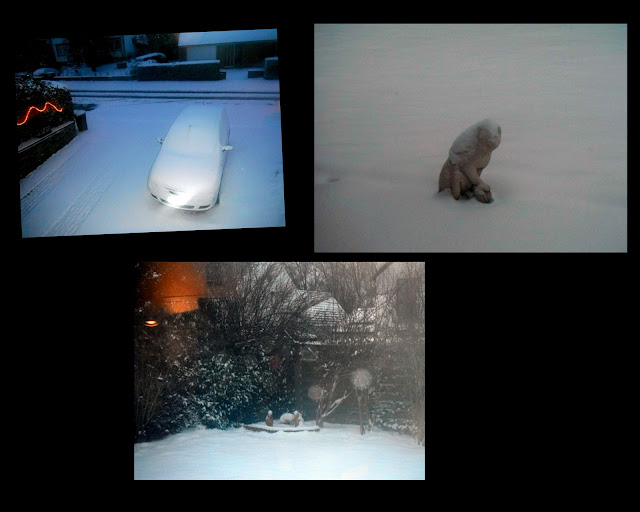 Mr. G. had to clean his snow covered car and wasn't happy at all with that, because it cost him some effort ! Our little  cat statues in the garden wore all white hats !

2.The most exciting happening this week, was the electricity break down ! I was just in our guestroom to take a shower and waited that the room was warm enough to get undressed, when suddenly I was standing in a completely black hole ! Fortunately it's not so big and I groped my way to the door ! There I saw light, it was Mr. G. with a torch who wanted to check the fuses. Everything was OK, he then looked out of the door as our windows were all closed with electric shutters ! The whole street was in the dark !

Meanwhile I had called Dominique to know if she too was without electricity and she was. While we kept conversation on our mobiles (the telephone didn't work either) she was looking for some candles in the moonlight and then finally found them but without matches. But as a non smoker she found a lighter.

Of course meanwhile everybody had called the Electricity service and an answering machine told us that around midnight we would be lightened again ! It was 10.30. We went to bed and I read my book with the torch, when suddenly an hour later my digital frame showed myself on a camel ! The micro wave started with the help of a ghost and Dominique got a shock because somebody was in her office, but it was only the printer which had started to work, what normally it refuses ! This event showed us how much we depend on electricity ! And I imagined with horror myself standing naked in the black bathroom !

Such electricity cuts only happen very seldom, and for a very short time I can't even remember when it happened last time !

3. A friend had told me that I could also use coal briquets in our open fire 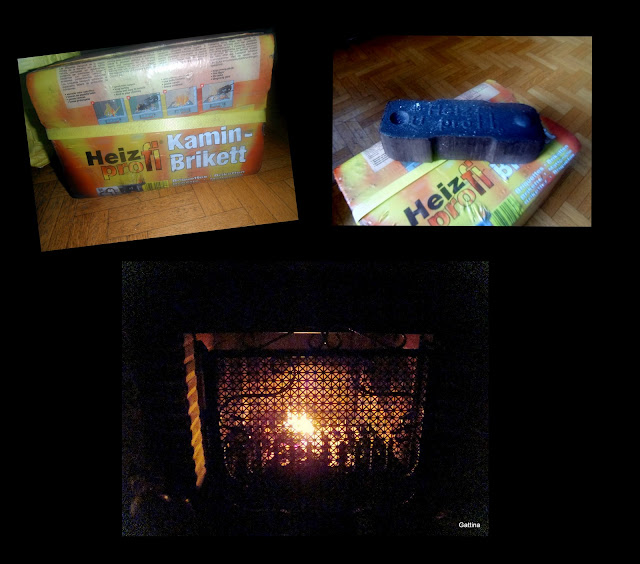 After our Electricity black out I bought two packages and we tried it out ! It worked perfectly and heated much more then logs only. At least sitting in front of the open fire would keep us warm !  Since 2 days now, we light the open fire hearth it adds some more heat and looks cosy. 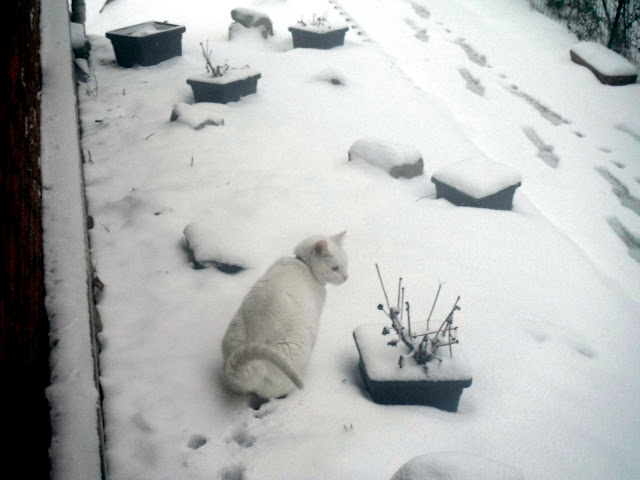 From our four cats only Arthur enjoys the snow, especially as litter box, it's so easy and soft to dig a little hole in the snow. 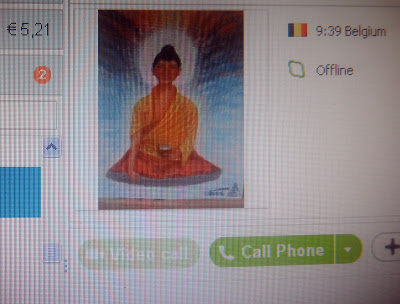 She used a painting of hers as avatar

In the afternoon I went to my friend Ilona to install Skype on her computer. In her street it was even worse then in mine, I really had to walk very carefully, because the street was covered with ice and very slippery. After some cups of tea and chats, I downloaded Skype for her and when I came home I called her to see if it worked and it did ! Only I couldn't see or hear her, because she has to buy a webcam, but she could see and here me. I showed her the puppets I use with grandson Toby and she had a lot of fun. Everything new is always fun !

5. My neighbor had go go to the hospital again to get her shot in one eye against the Macula a disease which cannot be healed but at least stopped from becoming blind. She takes it easy and with humor, because she said she anyway has not the choice so we had a funny ride to the hospital and back. The main streets were clean in Brussels and besides some very aggressive drivers we had no problem. 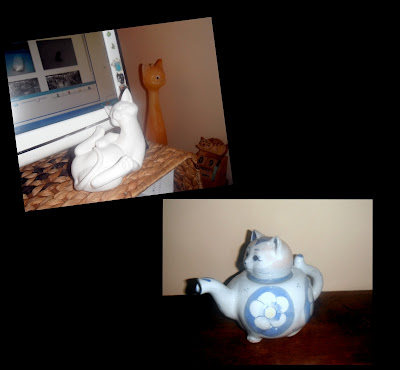 I have got two cat presents again, the white one from my friend Chantal for Christmas and the teapot from another neighbor as a thank you because we took care of their cat during the holidays. I think I need an exposition shed in the garden, the house slowly becomes too crowded !
Posted by Gattina at 06:00 16 comments:

The only definition of "Inspiration" I found in a dictionary : "stimulation or arousal of the mind, feelings, etc, to special or unusual activity or creativity"

Sometimes before I write a post for Alphabet Thursday, I have a lack of inspiration. Of course it depends on the letter, for  XYZ  it is not so easy  to be inspired. Usually I look around me, I listen to people I watch them, and then suddenly comes the inspiration ! That's the same for my paintings, but it is easier, I just have to look at some pictures and then at least the penny dropped !

Sometimes Mr. G. inspires me, when he lays on the sofa or he does long naps or just hangs around. Then I could write a post about lazy people but that starts with L or retired people and that starts with "R". So nothing for "I".

The fact that we were without electricity and wandered around with torches and lighted candles and I chatted with the neighbors on our mobiles because the telephone didn't work, would fit on a theme about electricity breakdowns, but this again is better for E.

It also had snowed and the world around me became suddenly white. Again a good subject for S or for W which stands for Winter. That makes me think that I could write about ice, but what ? Nobody broke its neck or legs so far and nobody does ice skating they are all too old, I mean my neighbors. 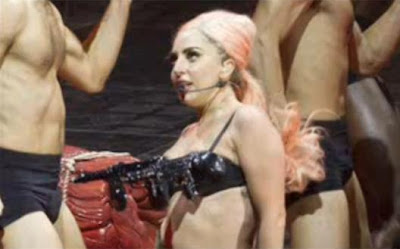 This picture could also inspire me to write about very bad fashion tastes, or insane women, or about those who fool  the world and make money out of it. The only practical thing with this bikini is that she can hang her wet bikini on the machine guns to dry. 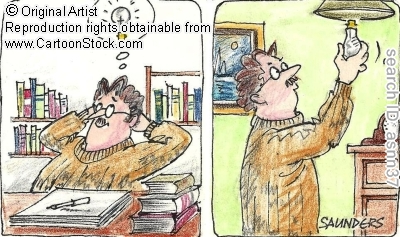 I'll do the same next time ! 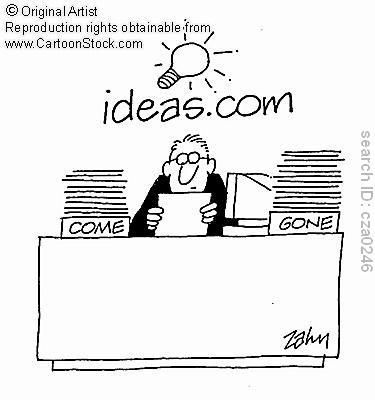 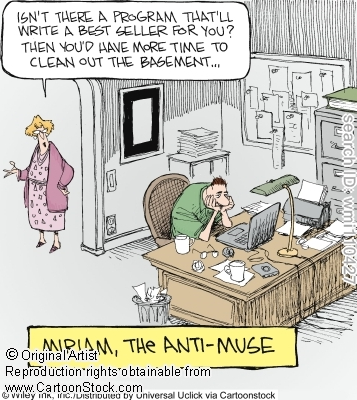 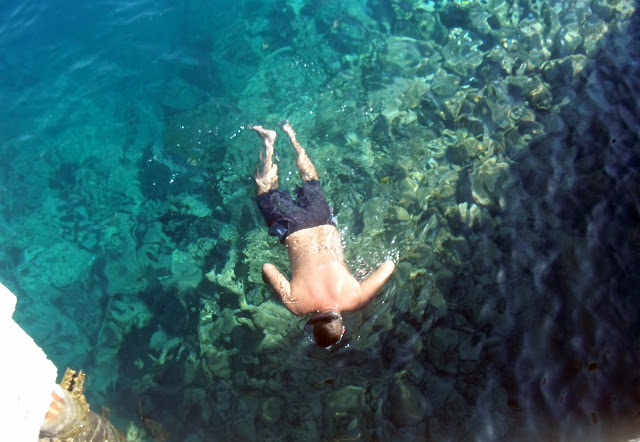 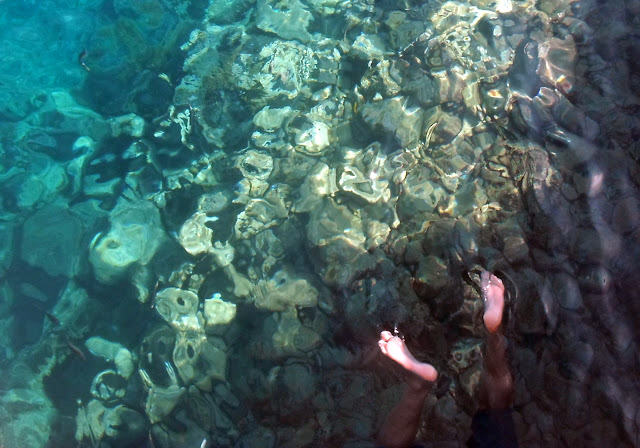 OUR WORLD - SOUTH OF FRANCE IN WINTER

I had the chance to celebrate New Year with my friends living in Ollioules  a charming little town in the Provence-Alpes-Côte d'Azur a region in France near to Toulon. Located 5 kilometers inland, Ollioules is near the lovely beaches of the Provençal coast and only 200 km from Ventimiglia in Italy .... read more here
Posted by Gattina at 06:00

Helps you to remember what you have done on the weekend of January 12. If you participate please put the little logo on the top of your post and leave your link.

I think I woke up from my lethargy, because on Saturday suddenly I wanted to make a little tour outside. I had been told that two new shops had opened in Waterloo, one which only sells stuff from brand stocks of all kinds, from the cooking pot over washing powder to decorations and toys. The prices were unbelievable cheap, but I didn't buy anything for the simple reason that I had forgotten my money at home ! So I will go back there when I need something. It was just a check. The second shop was less interesting to me they sold antiques, and mostly from the Congo ! Ferocious masks, which could give you nightmares and other African antiques. Unfortunately I forgot to take pictures of the masks ! I have to go back for this purpose !  I met a friend who had the same idea to check on these new shops, but it was too late to have a coffee together so we both went home. It also was bitter cold and windy.

The afternoon went by with some blogging and in the evening we watched our favorite Inspector Barnaby in his Midsomer murders. The average of 3 corpses per movie was respected. Very much to Mr. G's satisfaction. He does the calculations. 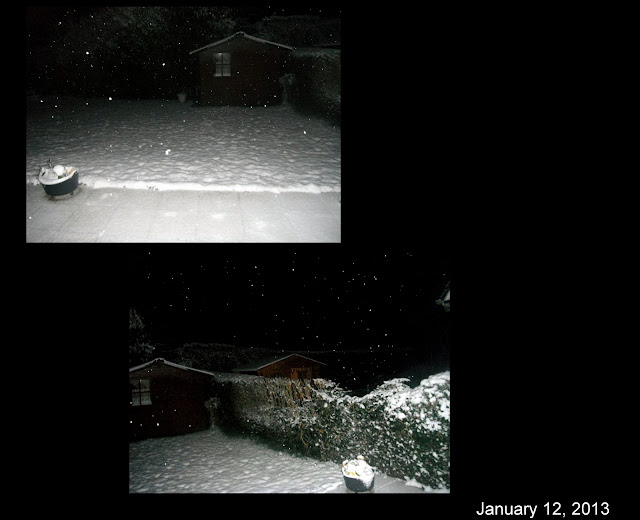 When I shut the rolling shutters, I noticed that it had started to snow !

On Sunday morning first thing was I opened one shutter just to see if the world had turned white, and yes it had ! 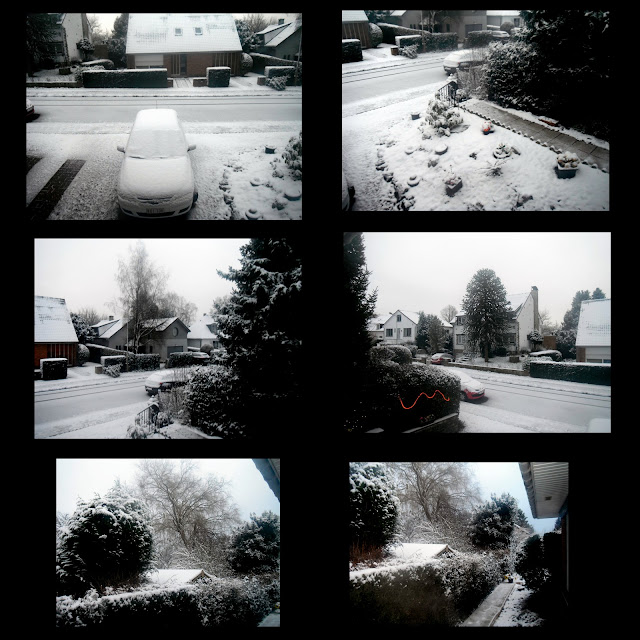 My first snow this year ! But apparently it had also snowed a bit in November, when I was laying in the sun in Egypt ! This is what I saw looking out of my window and the entrance !

In the afternoon Nicole had invited Ilona and me for tea time ! 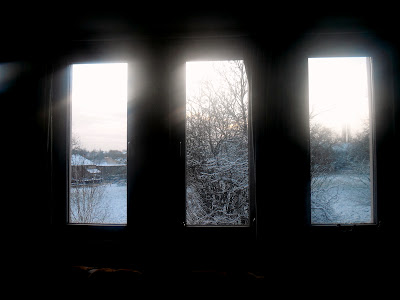 From out of her windows it looked real cold 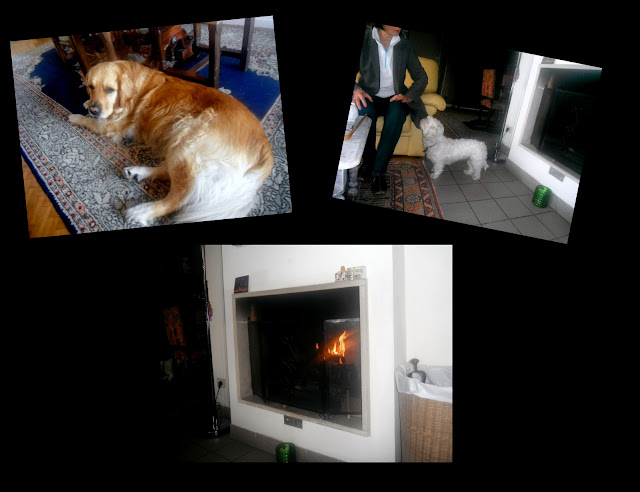 but inside it was so cosy in front of the open fire, with the two dogs. Charly the Golden Retriever belongs to Nicole, the little one is her daughters dog who is on holidays. 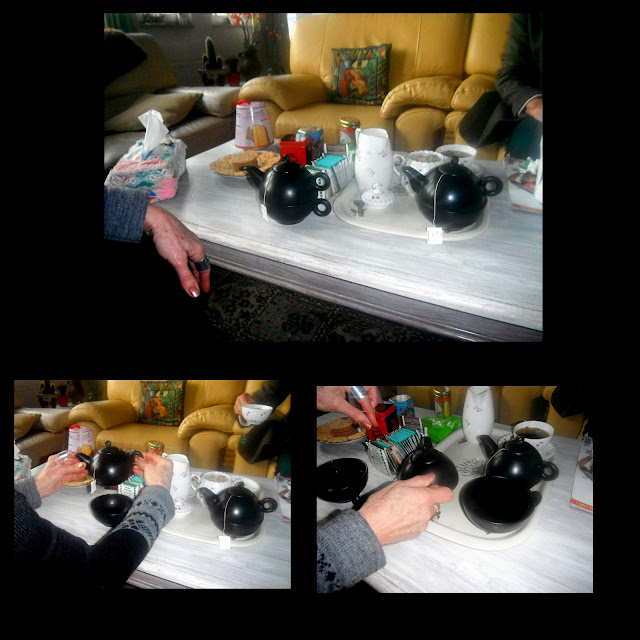 Nicole served us tea in black teapots. After a while Ilona asked for cups ! And then we laughed and laughed when we discovered that the tea pot was sitting on the cup ! We had never seen that. I found it real original and nice ! It also keeps your tea warm if you put the pot back on the cup ! 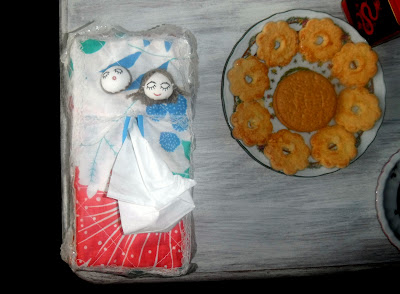 With that we had some cookies and a cake, and I loved her tissue box in form of a bed with a sleeping couple ! So cute.

We spent a real nice afternoon, with lots of chatting and laughter of course. When we returned home it started snowing again.
Posted by Gattina at 06:00 6 comments: