1. In a sudden energy attack, I took the opportunity to take all the curtains off, washed them and put them back. The winter dirt is gone and the curtains are bright white !

2. The sun had suddenly taken a decision and showed its nose ! It was still a little too cool to sit in our garden, but Nicole's terrace is wind protected and she asked me to come over for a first sunbath ! 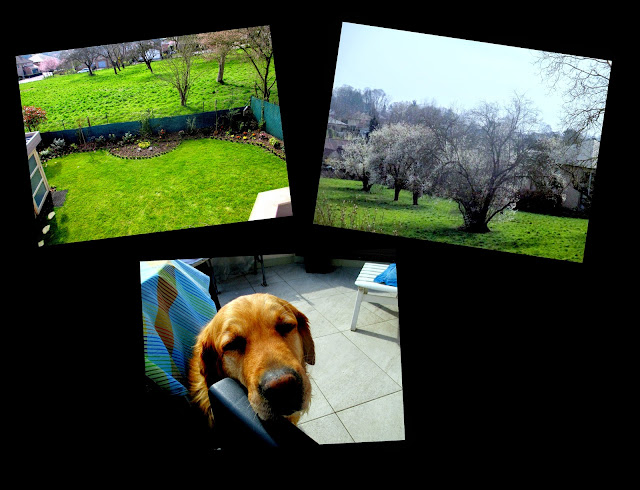 We still wore cardigans but it was so nice to sit outside, see the trees starting to bloom and the neighbor's garden the first flowers had been planted. Charlie also enjoyed the sunshine and listened to our conversation. 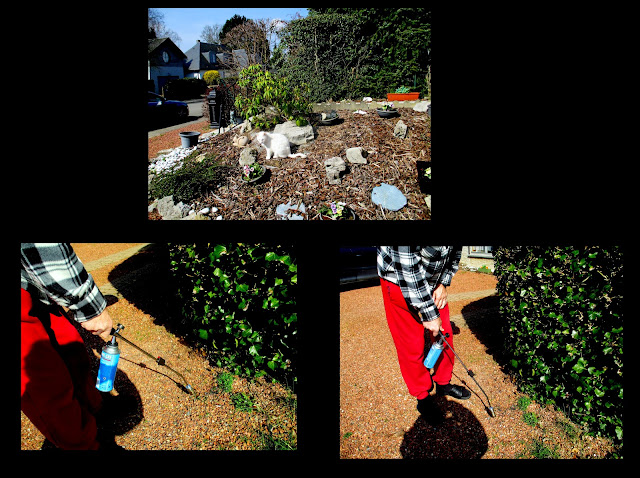 There is a very hot flame coming out and burns all weeds. You could sit in a chair and turn around and get rid of all weeds. Our gravel is now completely clean and cat Arthur was supervising the whole procedure.

4. It had been quite a long time I hadn't been at Ilona's, and again to enjoy the sunshine, we sat on her terrace in the sun. 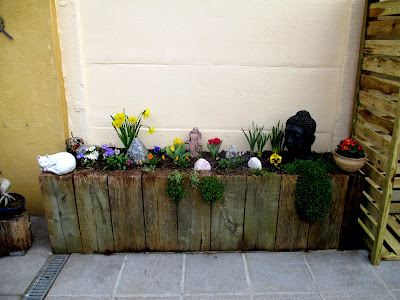 She had her terrace transformed with a new flower bed and had a rack installed to stock her logs for her wood burner. Now it's easy for her to carry in the logs. It all looked very nice. We had a nice afternoon with a cup of tea !

5. The sun continued shining and I felt obliged to work a little bit in the garden ! For the first time this year Oscar the lawn mower robot was taken out of his winter bed and mowed the lawn while Mr. G continued with his flame thrower to kill the weeds. 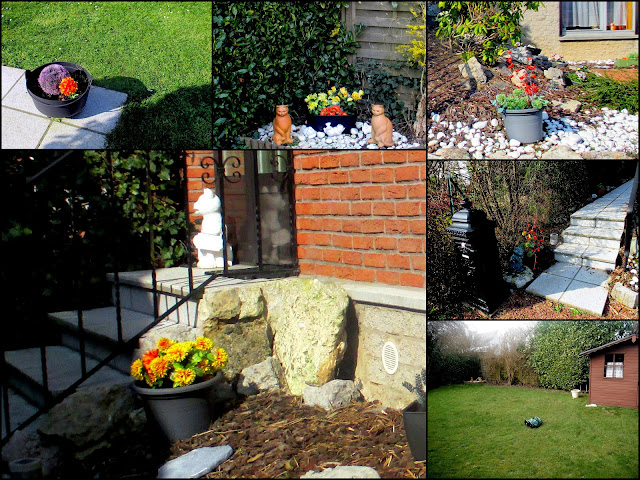 I decided to "plant" my fake flowers in the pots. Seen from the street they look real. Now the entrance looks nice and also my little graveyard in the back. I also cut the grass along the terrace where Oscar has difficulties to mow. After that I was exhausted and hid behind my computer to recuperate !

When it comes to the letter Q, on my forehead there is a big question mark ! So I thought I should write about questions.

Why do little boys have a thing between their legs and girls not I thought about an answer which took me a long time to give an intelligent but understandable answer to the question. I gave up and thought  writing about a Quiz !

Of course the explanation in a dictionary was so boring so that I made the Quiz : Are blonds dumb ? The result was not so bad it could have been worse :

You're a bit ditzy, yes, but you'd be the first to admit it! You've got a happy-go-lucky attitude and you find the whole "dumb blonde" stereotype kind of silly and are kind of proud of it!! Woo-hoo! Go! Blondes! Go!...oh, no! Wait...I didn't mean go! Come back!

Wen it came to quantity and quality I gave up I had only two answers ! I like quantity when it comes to clothes as I like to change often and have no regrets to give them away when I can't see them anymore, but for all things concerning my house I am for quality.

When it came to "Quotes" I realized that if you google there is a flooding of quotes enough to write at least 3 posts.

I selected two which fits on me :

Do not dwell in the past, do not dream of the future, concentrate the mind on the present moment.

I know that I speak too much ! 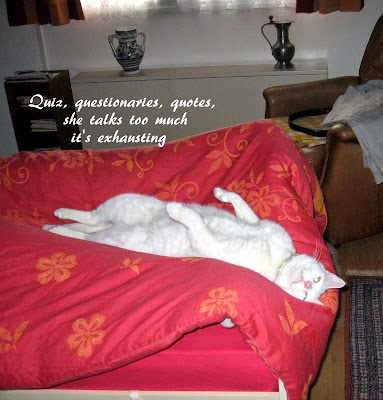 PS. Blond as I am, I thought the letter Q was for today instead of U ! Sorry ! 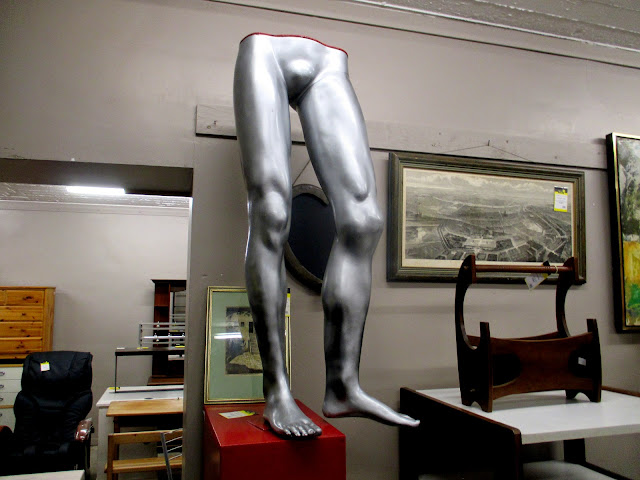 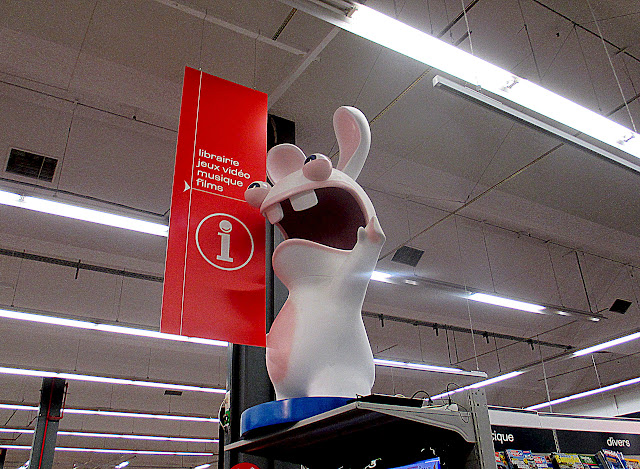 Carrefour S.A. is a French multinational retailer headquartered in Greater Paris. It is one of the largest hypermarket chains in the world, with 1,452 hypermarkets at the end of 2011, the fourth largest retail group in the world in terms of revenue (after Wal-Mart, Tesco and Costco), and the third in profit, after Wal-Mart and Tesco. Carrefour operates mainly in Europe, Argentina, Bahrain, Brazil, China, Dominican Republic, Iran, United Arab Emirates, Qatar, Lebanon, Kuwait and Saudi Arabia, but also has shops in North Africa and other parts of Asia. Carrefour means "crossroads" and "public square" in French. It hasn't made its way to the States yet.

It had been a long time that I hadn't been to Carrefour, and as it was so cold outside, it was the ideal place to walk around and take some pictures. 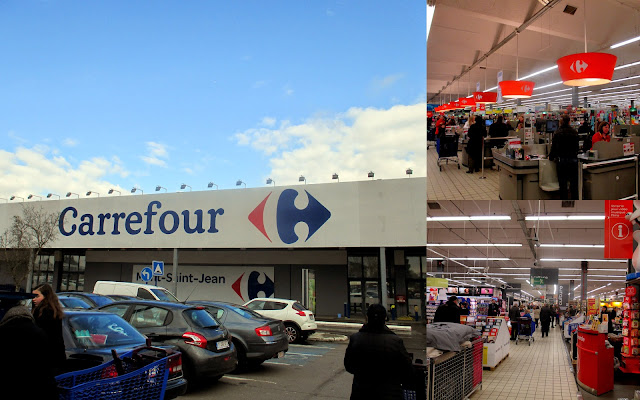 The hypermarket was full of people doing their last Easter shopping 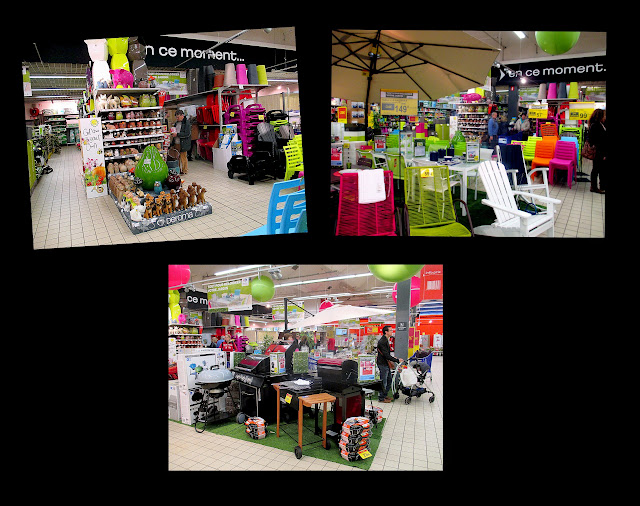 The garden section was empty, nobody needed barbecues or garden furniture yet 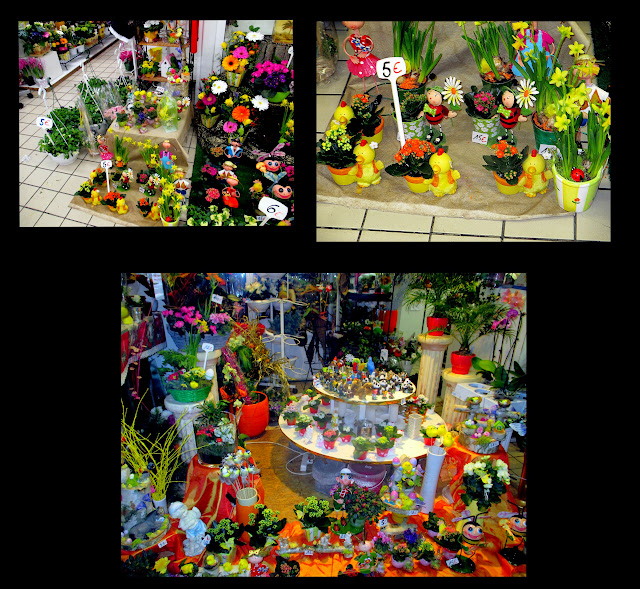 But the flowers had a big success 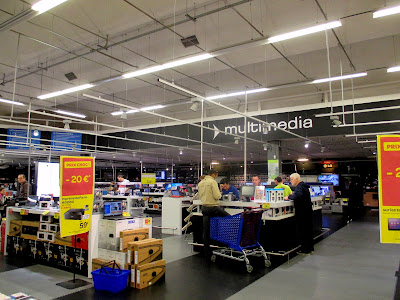 As usual there were only men in the multimedia section, women belong to washing machines and dishwashers. 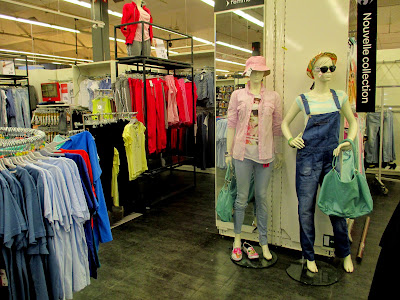 A little bit of the new collection 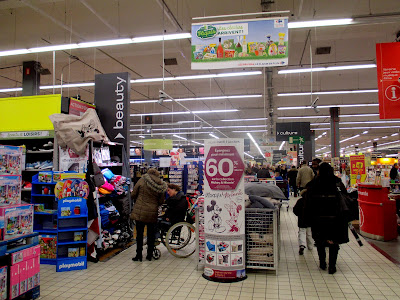 Something for the beauty too 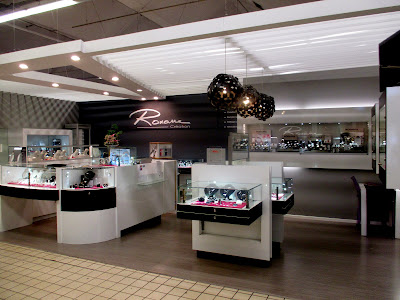 and of course a jewelry is not missing 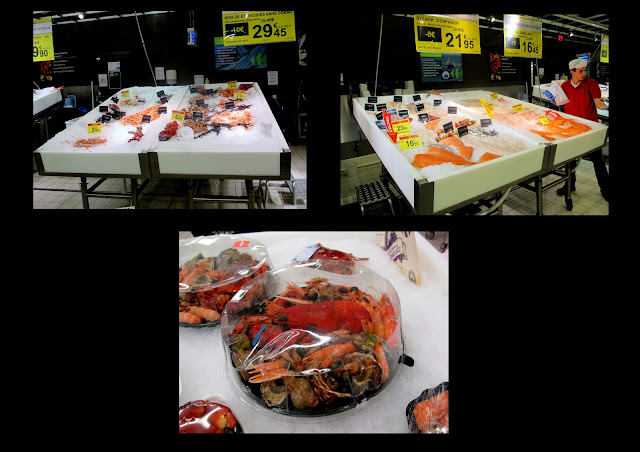 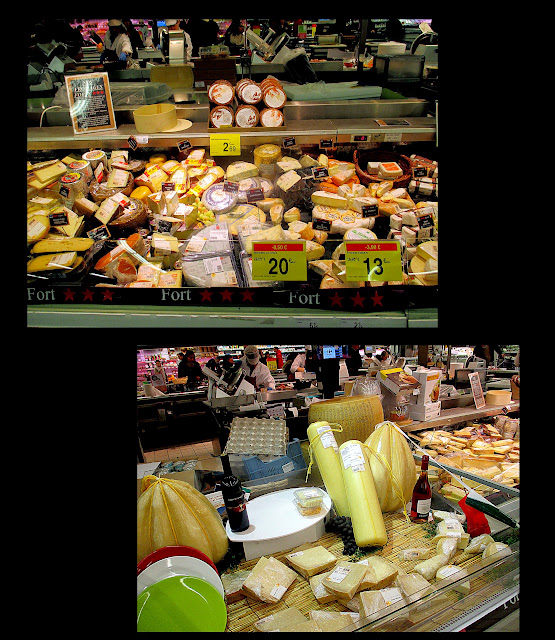 a big choice of cheese mostly from Belgium, France and Italy 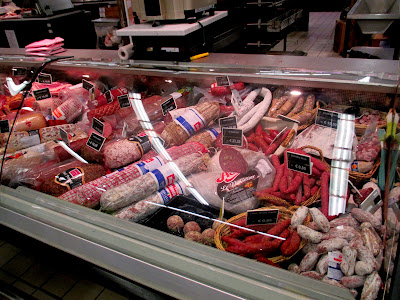 The same for sausages and ham 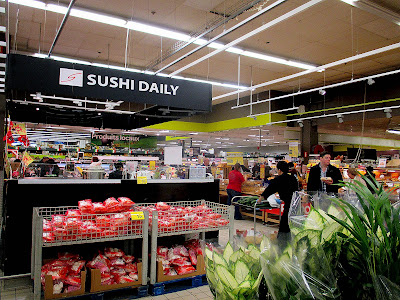 There was even a Sushi stand 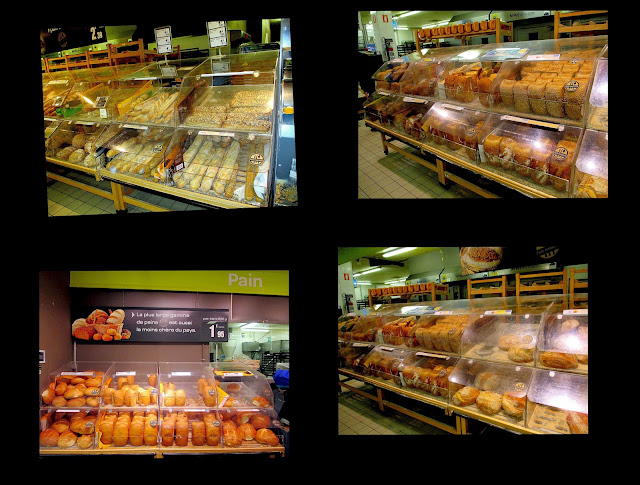 a huge selection of bread 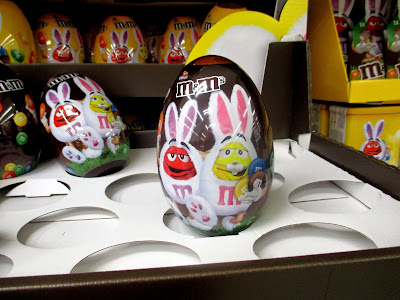 and eggs for children. Only two were left The wine came from all countries and you had a big choice. In Belgium people mostly drink a glass of wine (or more) with lunch and supper.

After having seen enough, I returned home.

On Easter Saturday I thought about the poor kids who will go into the different parks in Brussels for egg hunting in this rain we have since a week. Only late afternoon the sun showed it's nose for a few minutes ! 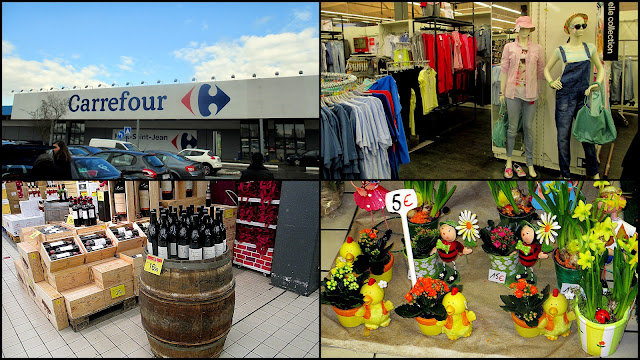 After having done some laundry, blogging and watching TV I needed to go out ! Finally I ended up in the huge Carrefour store, where you find everything and which is big enough for a little walk ! I didn't buy anything but watched the people with their overloaded caddies with Easter goodies.

In the evening I got a Skype call from my friends in Eastbourne they had moved back into their house they had to leave for 6 months because they had a water infiltration. She was happy to show me around, the new kitchen and bathroom, new painting and new doors. I will see this all when I am going there end of July. Skype is great for house "sightseeings" !

On Easter Sunday the sun was shining ! So before I went to the hospital to visit Ilona's mother, 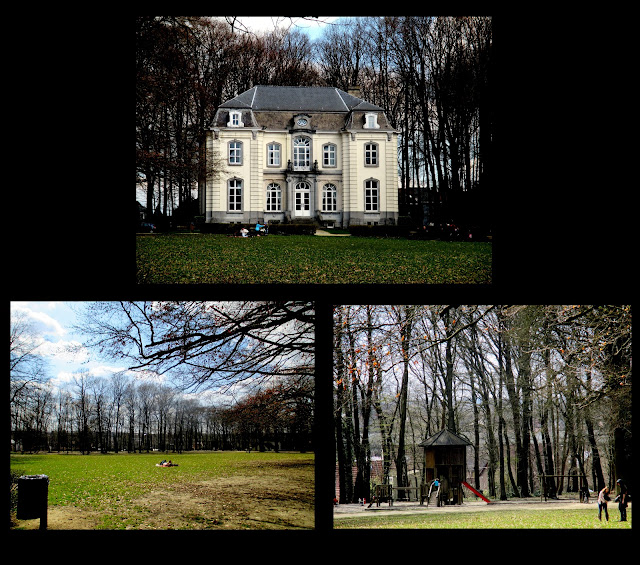 I decided for a little walk through the park Cheneau which is very close. Unfortunately it was still very cold, only 8°C and I thought the couple laying on the grass was very courageous. The building is called a castle but looks more like a manor. As you can see nature is very late the trees are still naked like in winter and nothing was blooming. With the wind it was really unpleasant to walk for a long time. 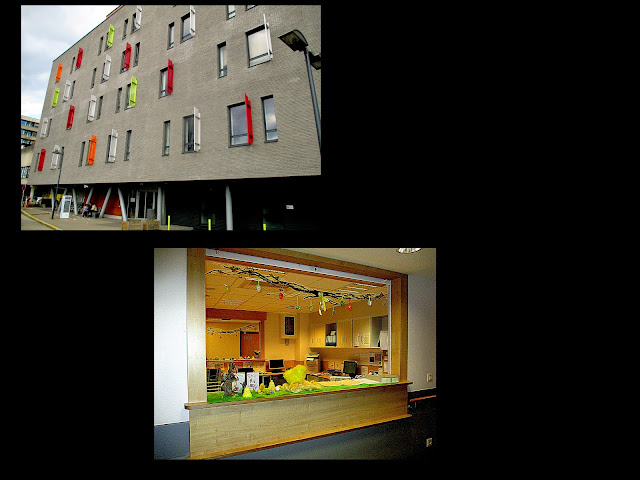 After the park, I went to the hospital, which once had been a very old one, completely outdated, but after a serious renovation and a new built annex it became now a very modern and welcoming hospital. The reception was nicely decorated for Easter and the personal is very friendly. This hospital is specialized for back, hips and knee surgeries. Ilona's mother (91) had a back surgery a week ago. When I saw her she walked towards me like a young girl and looked absolutely great. 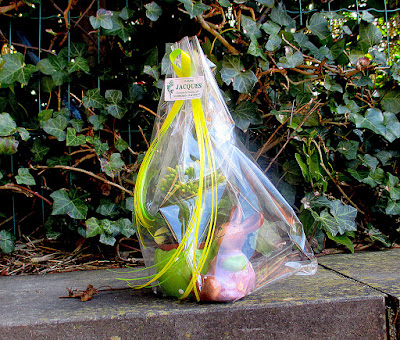 I had brought her a little Easter greeting and she was very happy to see me. We chatted for an hour before I returned home. She really is an amazing woman and will probably survive us all !

To all of you 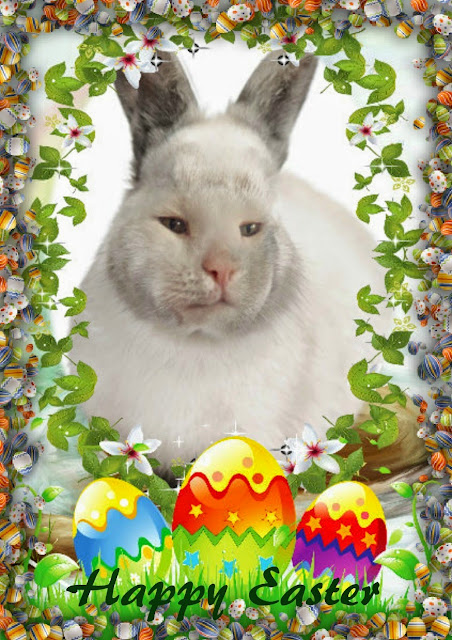