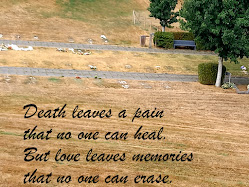 Now that Rick has finally gone with the wind, I'm relieved on one side, that everything is over now,  but still I didn't feel well at all in my own skin. I slept badly and nothing interested me.

Somehow I felt as if I were one of those who suffer from multiple personality. In me there housed two.

The me with the heart which hurt and which made me retire in my shell,  and the me with the mind who told me to pull myself together and go out and do the things I loved so much before. 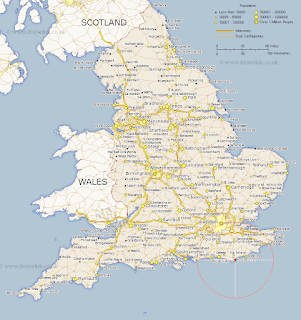 There was only one place to be all alone with my two selves. The English coast (East Sussex), more precisely Eastbourne. And that's where I ended up.

Taking the Eurostar now after Brexit is torture, you have to be there 2 hours before,(without Brexit half an hour) just like in an airport, the passport is checked as if we were all wanted criminals and of course the luggage is also examined!

That was really ridiculous because after all we have the same things as in England. And I didn't have hash with me! There was no koffee either in the Eurostar station, the machine was empty. Luckily there were sandwiches.

The train was on time, because since Brexit there have been strikes in England, at least enough to be talked about.

From St. Pancras to Eastbourne I still had to collect my ticket at the national Railway office, but the people there are so helpful and friendly that they arranged everything for me and I arrived even earlier in Eastbourne and already had my return ticket.

When I arrived I took a taxi which brought me to my Hotel "The Pier". I had been so often in Eastbourne when my friend Anne still lived, but I noticed a lot of changes. Closed shops, closed Restaurants, Covid and Brexit had left traces ! 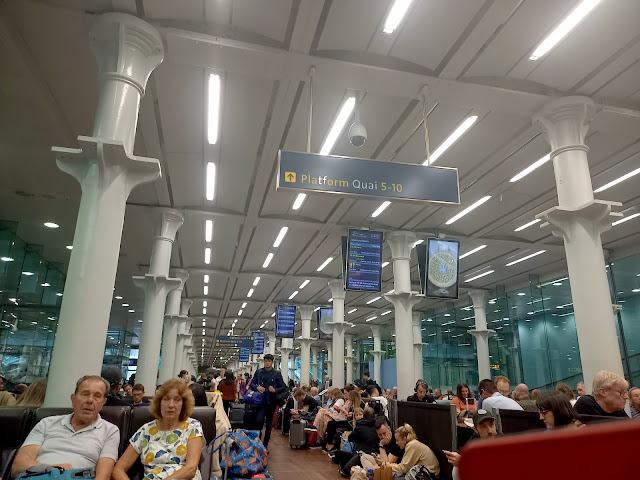 The (not  very comfortable) waiting area of the Eurostar on both sides ! It all had changed. 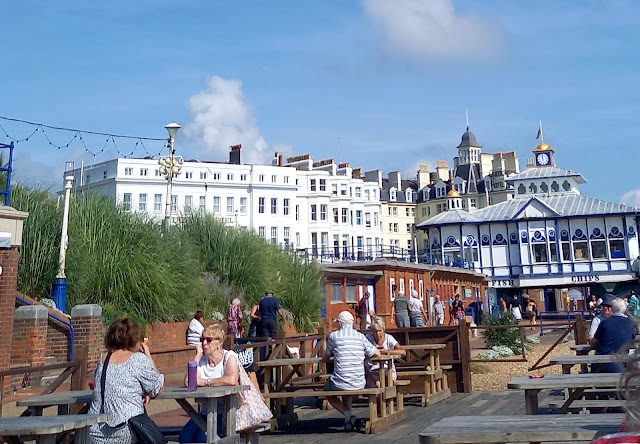 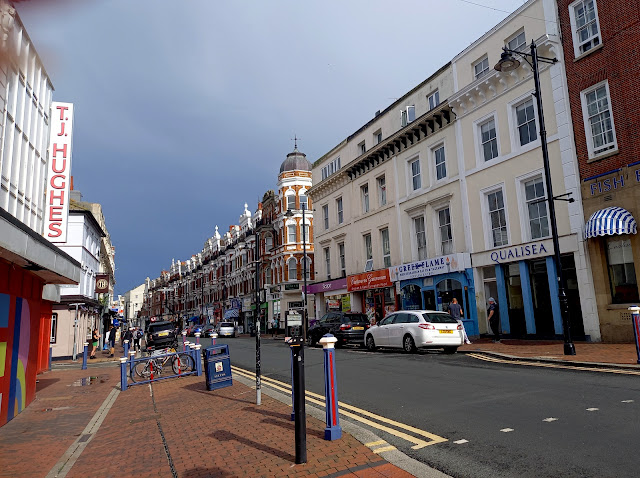 even the shopping street with a lot of shops closed or new owners with other stuff to sell. 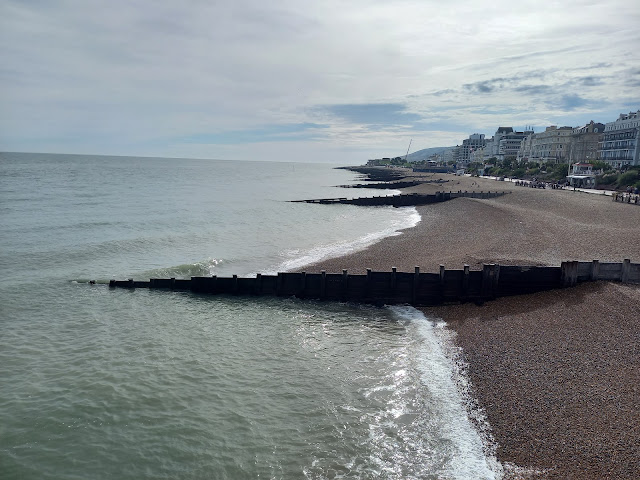 But the sea and the beaches hadn't changed at all. I walked a bit and then sat down and watched the waves and listened to the screams of the enormous seagulls which looked like flying ducks, 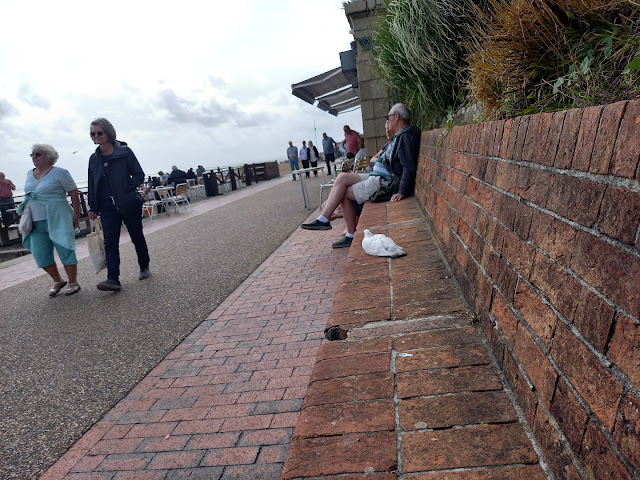 All along the beach you had these little walls where you could sit down, rest and watch waves, people and seagulls, which stole food so quickly that you didn't even realize ! They dived on the plate, took what was on it and off they flow ! Usually food is served on a plate but covered in a paper bag so that the seagull doesn't see if there is something on the plate or not. 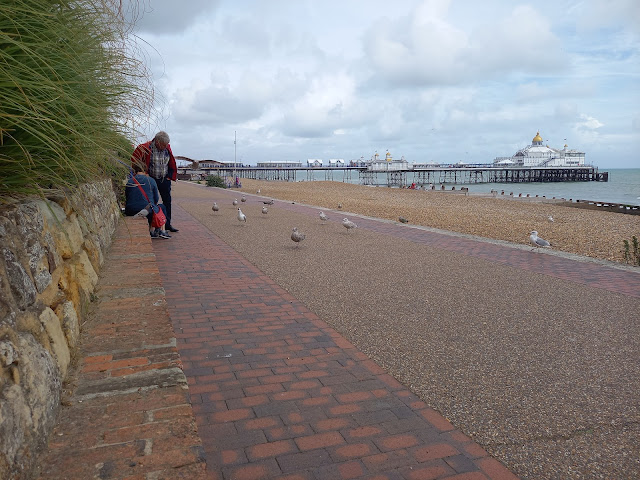 there were also some pigeons 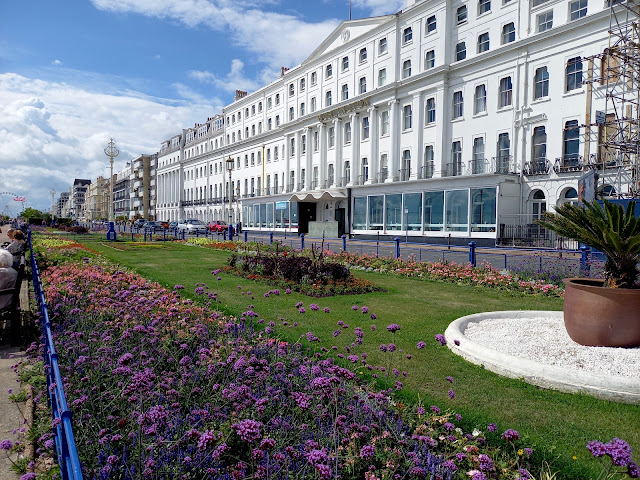 There are two seafront walks one along the sea and one on street level, with a lot of flowers, even palm trees and benches. 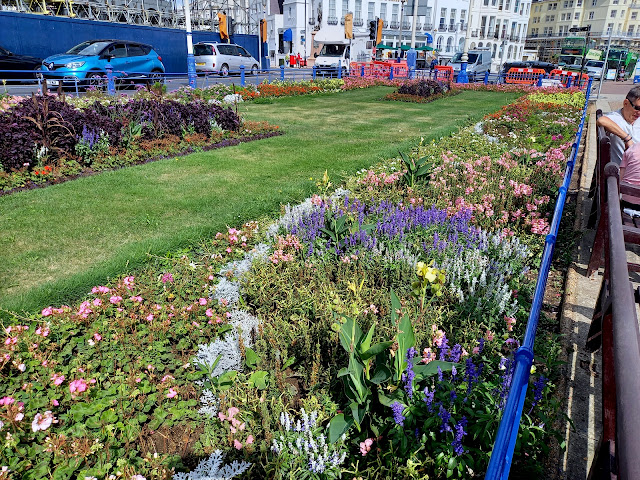 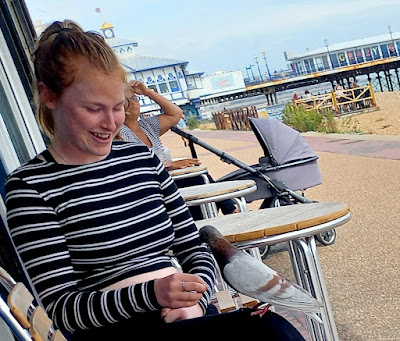 This pigeon just sat on the lap of the young girl 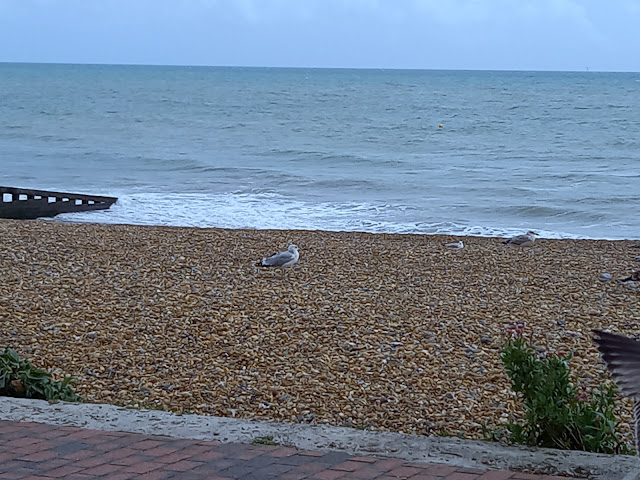 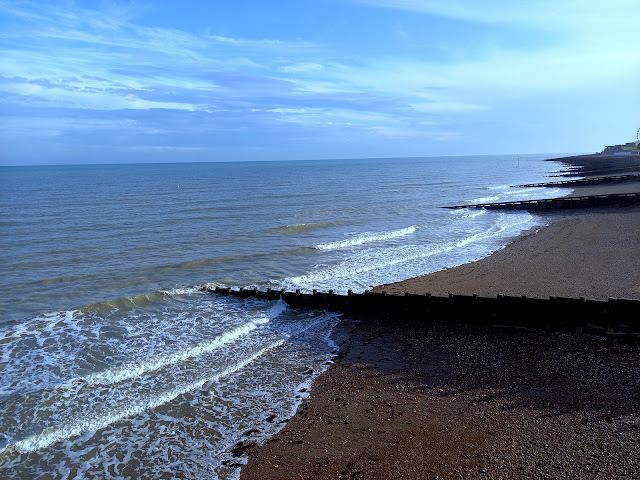 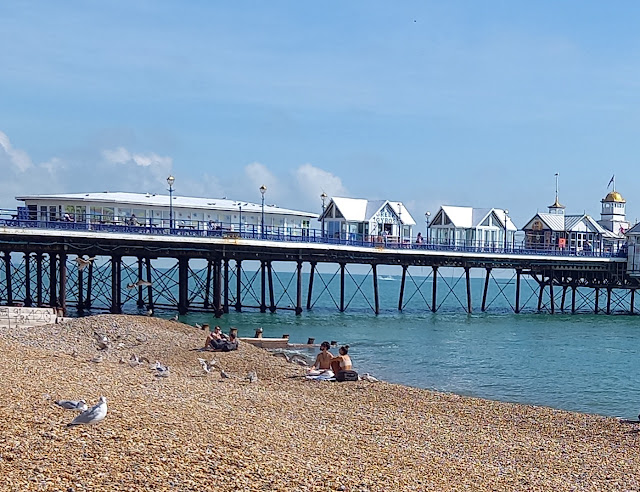 So I walked along the beach, sat down, watched the seagulls stealing and listened to the noise of the waves. Often people sat beside me and chatted and then got up and walked further just like I did. 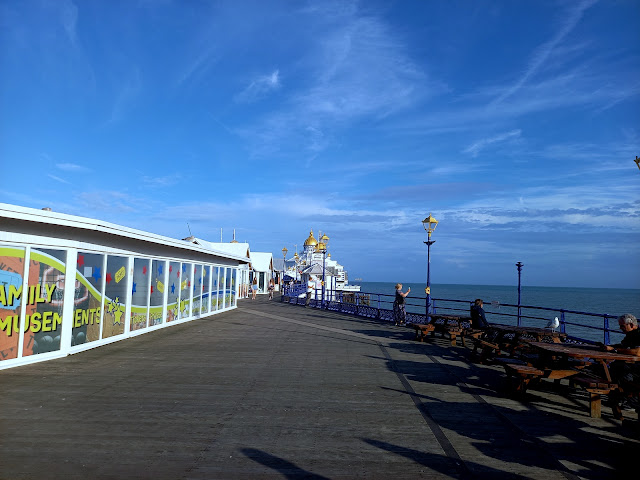 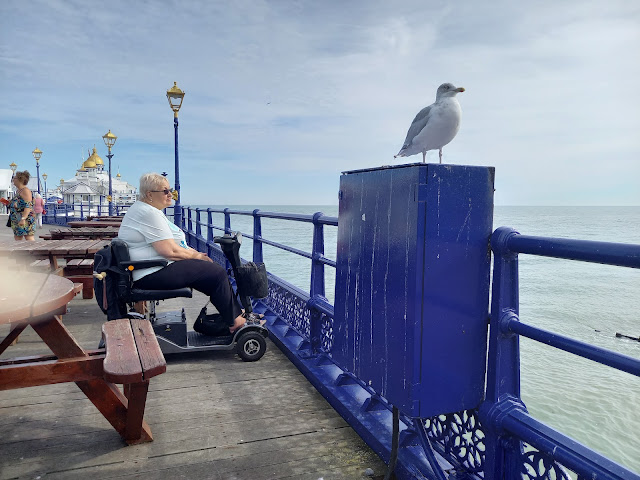 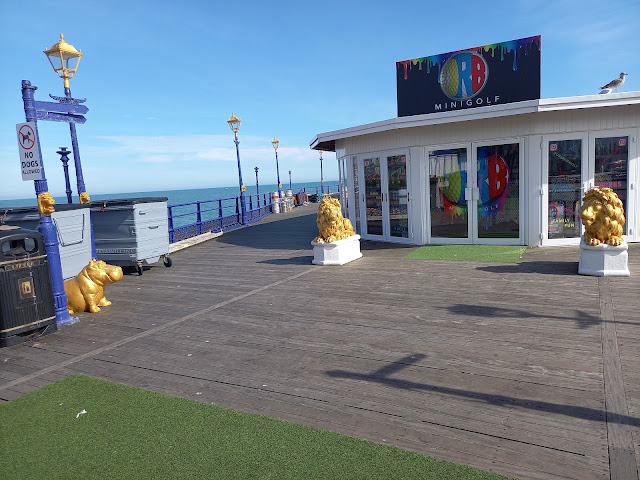 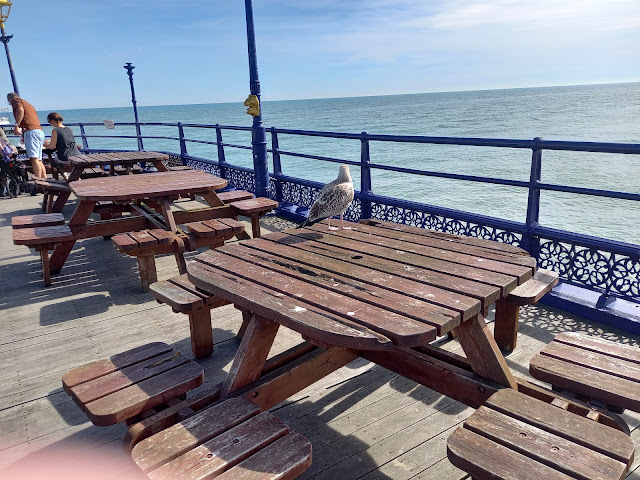 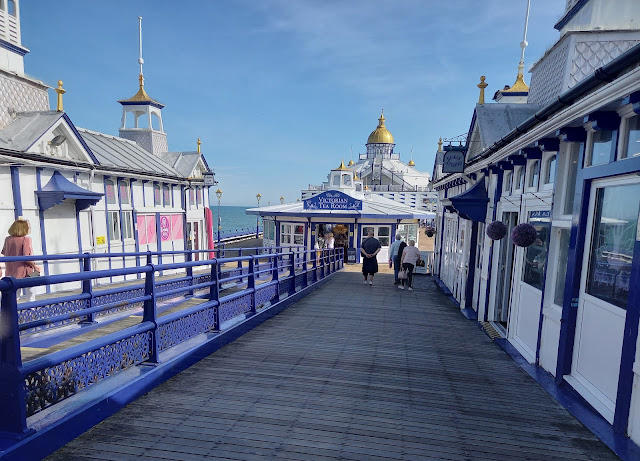 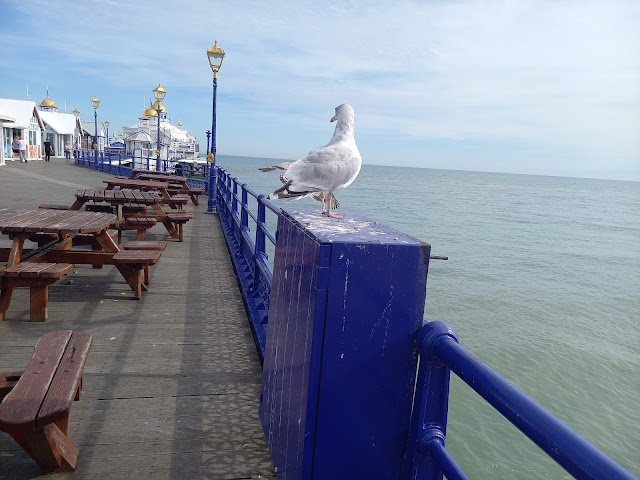 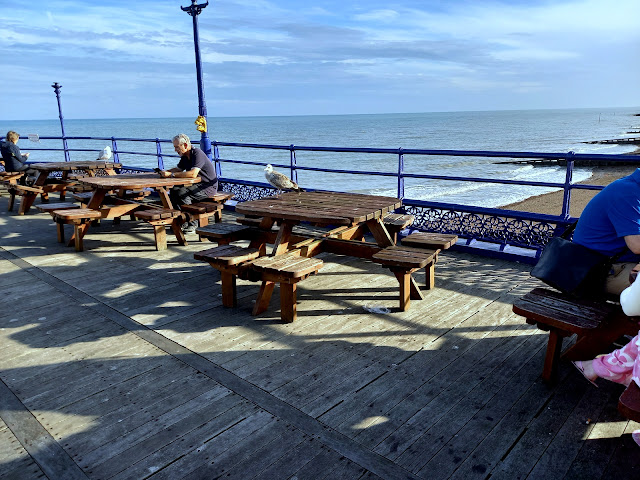 When it was not too windy I walked on the Pier. There too the little shops had closed and only souvenir shops open. All little restaurants or Take Away closed at 6 pm, because of expensive electricity and not enough tourists. If you wanted to eat something after 6, you had to go to town or buy something before 6 pm 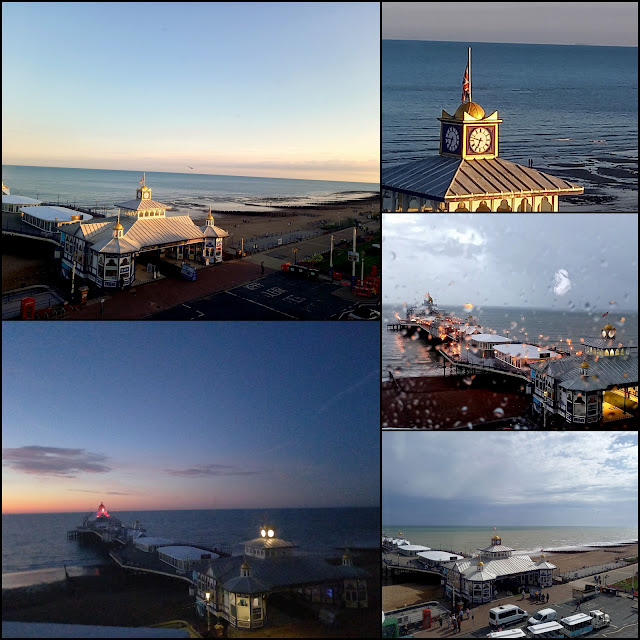 This was the view out of my window, just too beautiful 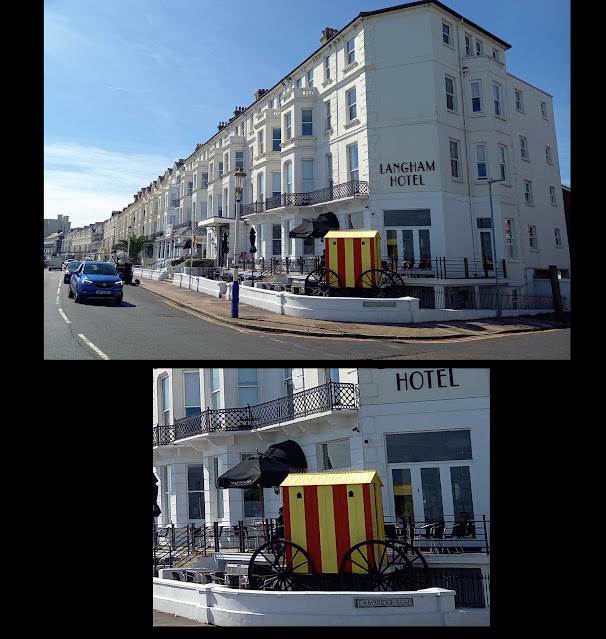 and that "wagon" made me laugh, because ladies were carried into the water with that while they undressed, so that nobody could see them in a bathing suit !

I didn't do anything during four days. I was still trying to settle the fight between my two me. Often in the evening I wanted to call home. But there wasn't Rick, only Rosie. My son texted me but I think he didn't really understand my state, I think you have to live it. 54 years of a happy life can't be erased. And it's only three and a half month ago anyway I have to do a new start.

In the next post  I will write about the two excursion I did in a wonderful landscape, the South Downs.

more participants at Susanne at Living to tell the Story.
If you have difficulties to comment, just scroll down to :
Subscribe to: Post Comments (Atom)
click on it and then you can comment !
I have the same on other blogs and it took me quite some time to find out !
Posted by Gattina at 13:41 12 comments: