The whole last week I spent in Amsterdam/Ijburg to keep an eye on Grandson Toby when he came back from his football (soccer) summer training course at 4 pm ! 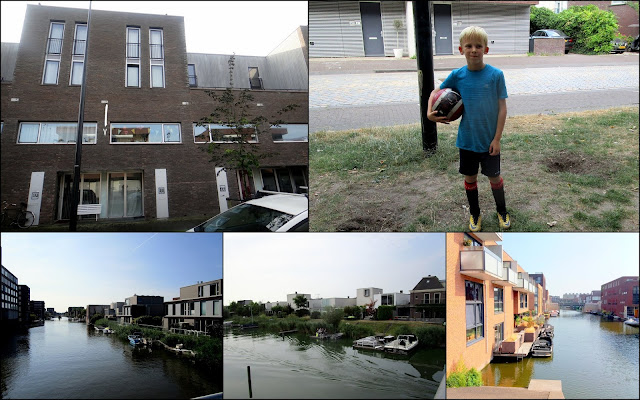 Here you can see him in full outfit, with thick stockings and shinbone protectors underneath, despite the heat he didn't bother. He stands in front of the house, which you can see at the left, the houses are high and narrow, I put an arrow there were the neighbor house starts. 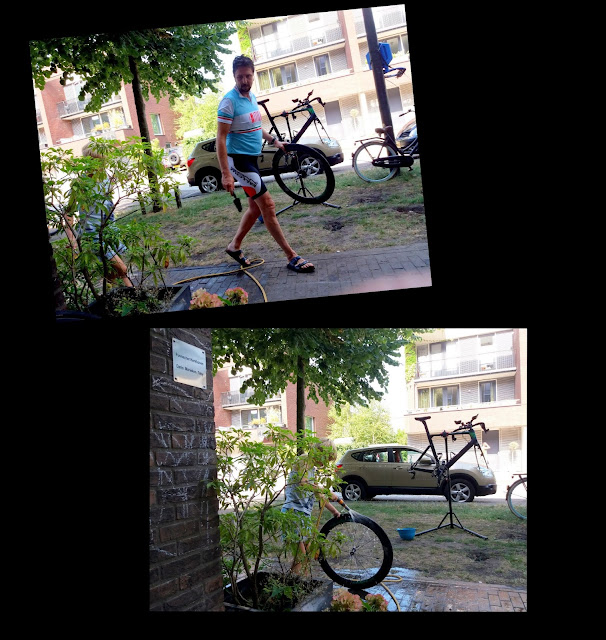 The house front is good for everything, bike cleaning with Dad for example 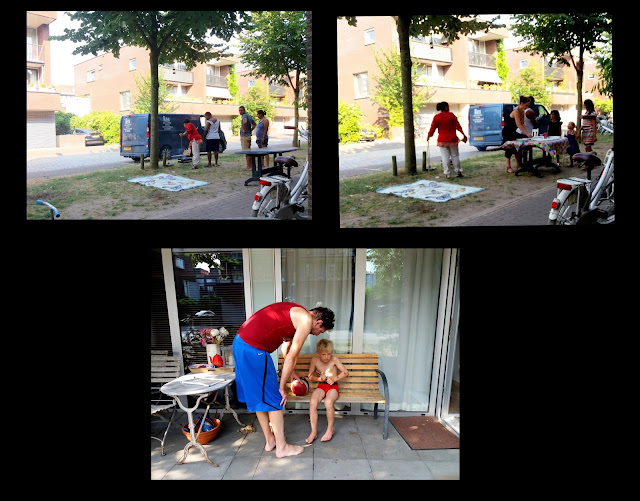 or when it was too hot on the terrace, also barbecue, as the neighbors did one day. Toby's ball was almost flat so he pumped it up with all his strength, helped a bit by Daddy of course. 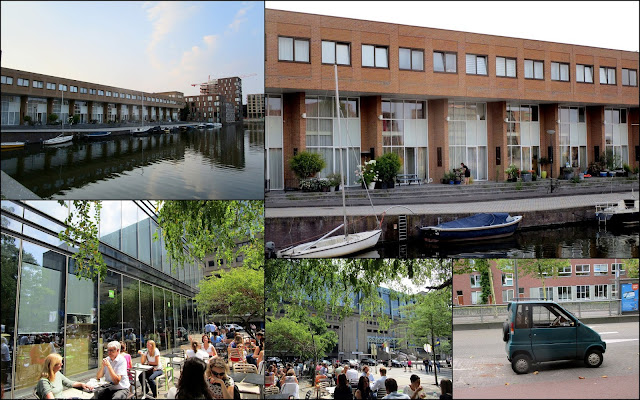 When I was alone and it was not too hot I walked a bit around and discovered a little shopping center with lots of shops, but open air. I also saw a few of these little electric cars, much more than I do here at home. The houses are very modern of course since they are all not more than about 12 years old.
It's funny to see when you step out into your "garden" where a boat is anchored ! 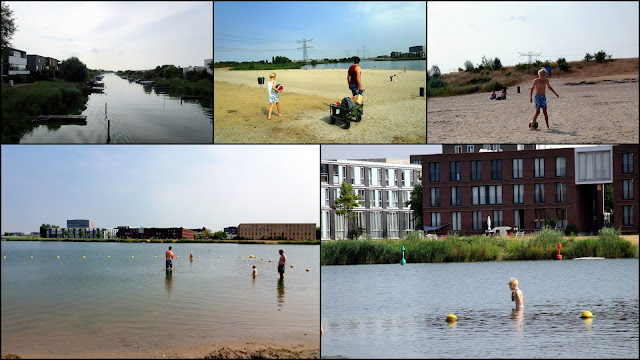 There is also a beach nearby about 10 min walk ideal for parents with children and in this heat ! Toby swims like a fish, he had to learn it at school since he was 3 or 4, because of the many canals around. Now he can even swim fully dressed with shoes ! 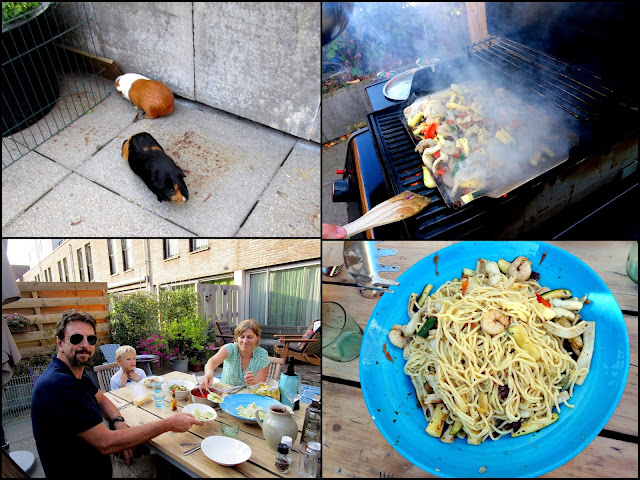 One evening when it was not too hot we could eat outside where my son had prepared a barbecue and grilled seafood.  (not Toby's guinea pigs !)  It was a delicious plate mingled with spaghetti ! 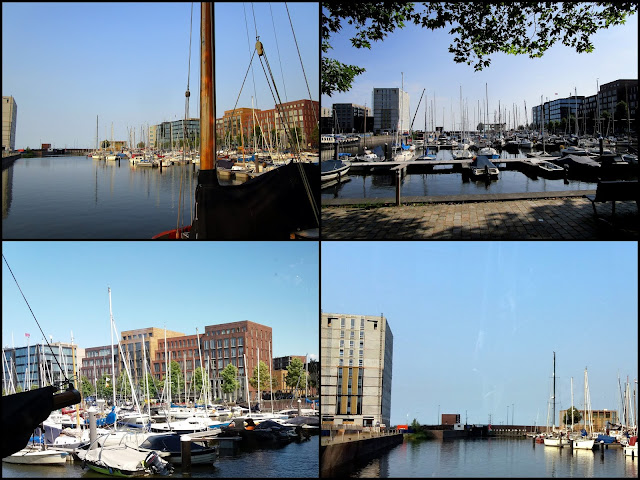 There is also a harbour at 5 min walk where we had supper in a nice restaurant, unfortunately I forgot to take a picture ! There are many private boats ! I even got the impression that people buy rather a boat then a car as everything is done by bike !

Toby went to his course by bike together with a friend and his mother. The mother accompanied the children (by bike of course) to the place. Children learn biking nearly at the same time as walking, because I saw very little once on very little bikes. As I haven't used a bike since at least 30 or more years I didn't dare to sit on one, I was afraid to fall. So I had to walk. Most of the people living there ride per bike to work, bring the children to school, do their shopping etc. of course this is only possible because the country is flat like a pancake ! and in this area there is not even the smallest hill !

Time flew by so quickly, and I was a bit sad when I had to leave. Toby and I went very well along and he speaks French better and better. We had no communication problems. He is a sweet and friendly boy and very social. Of course he now has his own will and discussions with the parents ! 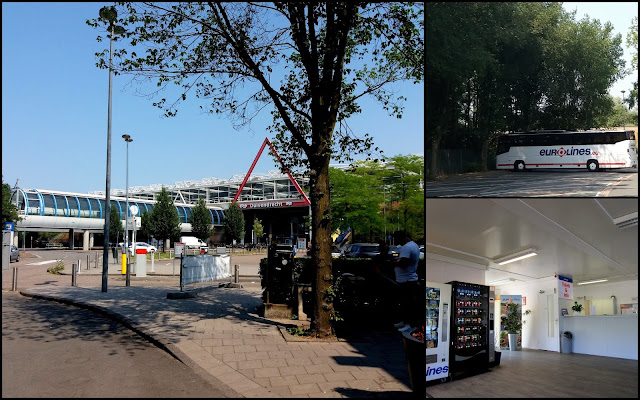 All good things have an end and my son had ordered a taxi for me to bring me from home to the station where I took the bus to Brussels. Outside it was very hot 35 ° but I didn't feel anything because it was nice and cool in the bus. When I arrived home I was knocked out by the heat ! In Amsterdam being at the see, the heat was supportable but in Waterloo it was as if you sit in an oven ! No air at all. On top of that, Mr. G. had put the ventilator away because the last years we didn't need it and he couldn't find it anymore !! Finally I found it this morning in the garden shed behind a chair and he had turned over the whole house !

It was the first time I really saw how people live at least in this area. I haven't seen this way of living nowhere else in the world, at least in all countries I have been. Now it's probably different in other parts of the Netherlands, but one thing is for sure bikes are everywhere !! 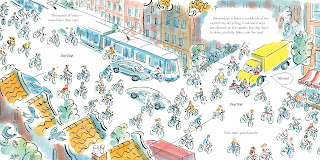 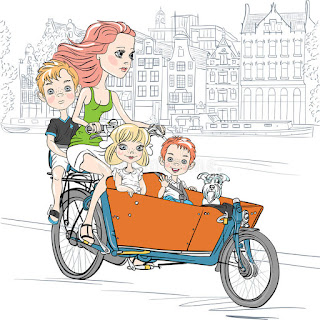 more participants at Susanne at Living to tell the Story.
Posted by Gattina at 11:13 12 comments: 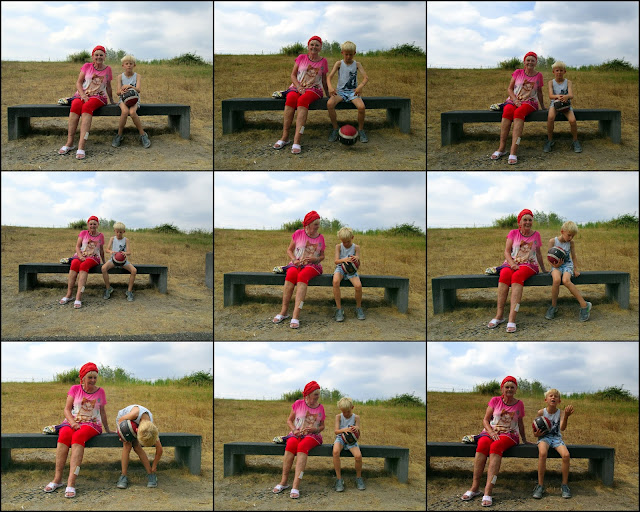 When Daddy takes hours to make one picture of grandma and grandson ! In the last picture Toby shows his Italian origins !

A DIFFERENT VIEW OF AMSTERDAM

As I am spending a week at my son's house in Ijburg I wanted to show you a modern part of Amsterdam where probably only a few tourists go. It is located in the outskirts of  Amsterdam but only at around 8 km (5 miles). It's a very modern area and ideal for young couples with children.

As there is not many room in Amsterdam the houses are attached and usually have 4 floors, which means a lot of steps ! 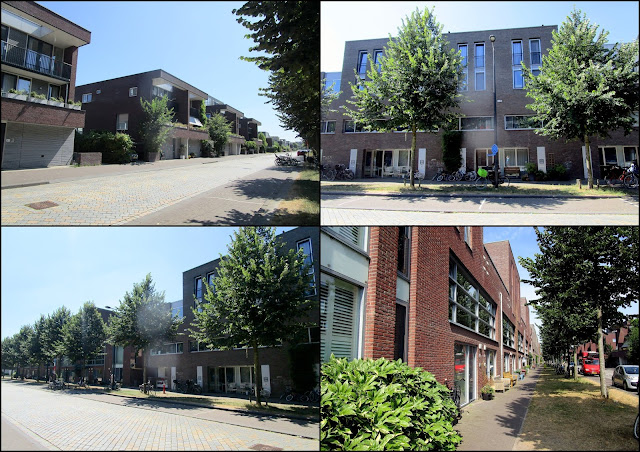 Here is the street and below left his house. Most of the houses have benches outside to sit and chat or watch the children. There are not many cars, only bikes and parking in the street is very expensive. Each house owner has a place in a common garage and you are allowed to only keep one car, otherwise you have to pay the parking fee of 2.50 Euros/hour !! 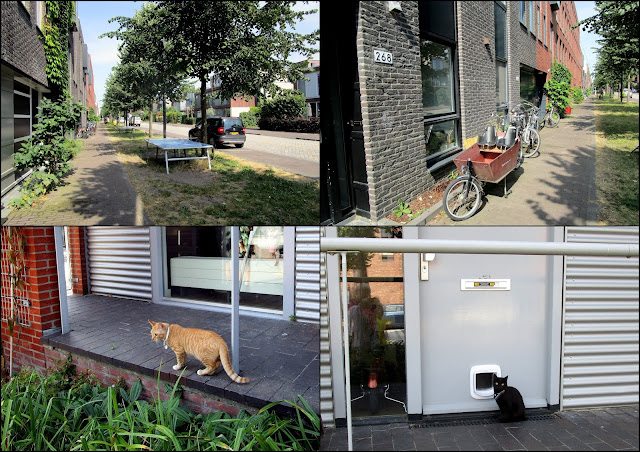 There are all kinds of big toys on the sidewalk and hundreds of bikes. The cats also have their space ! 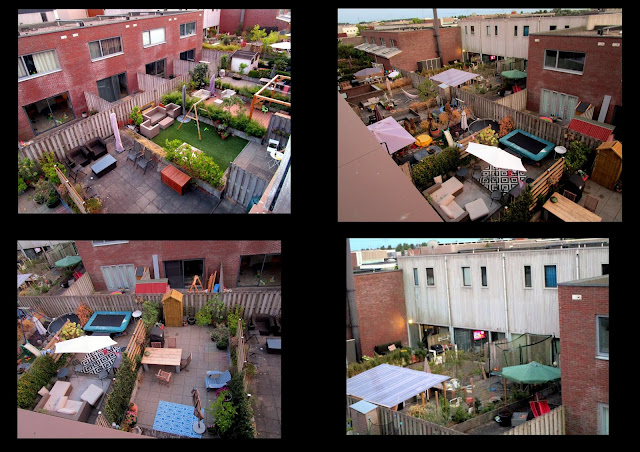 These pictures show the back of the houses. Each house has a big terrace and the residents try to make the best out of it so that it looks like a little garden. The one of my son is below left. Of course for me coming from Belgium where we have even in Brussels a lot of space except in the very poor areas, this seems strange to me. But these houses are very expensive and have a big success, because there are close to Amsterdam and very modern. There is everything you need, schools, shops, playgrounds and sports clubs. 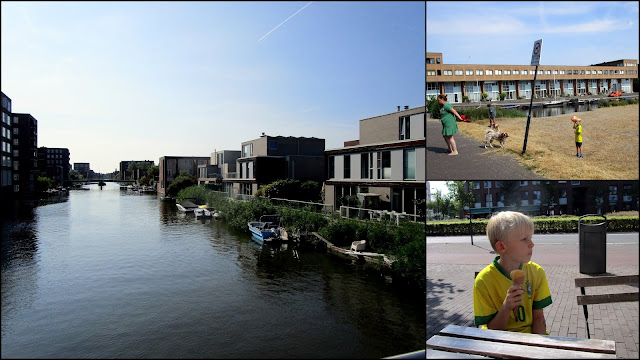 Toby my grandson and I walked along the canals to the nearby harbor where we had a delicious ice cream. 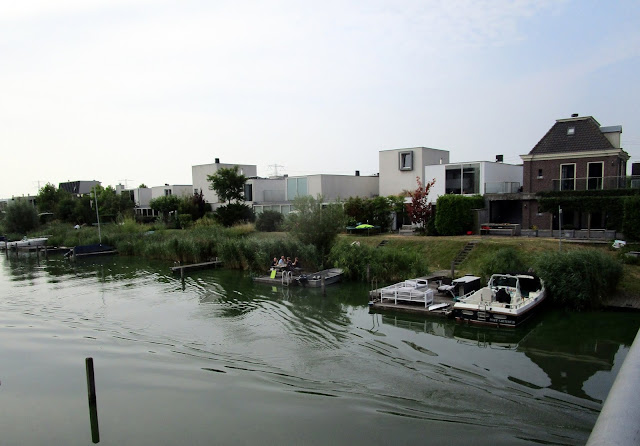 These people had their lunch just besides their boat ! Nice place to live when you have a boat just at the back door ! 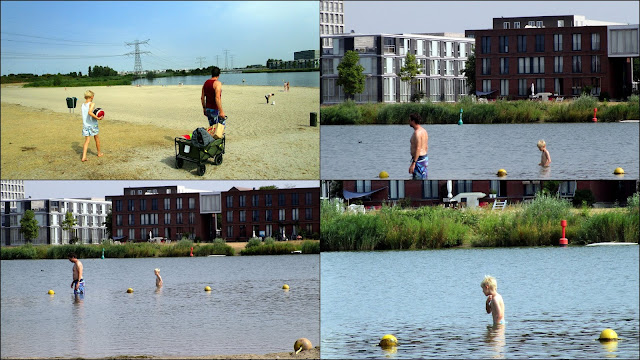 In 10 min walk you are also at a little beach, where we went and father and son did a little swim, because it was quite hot ! 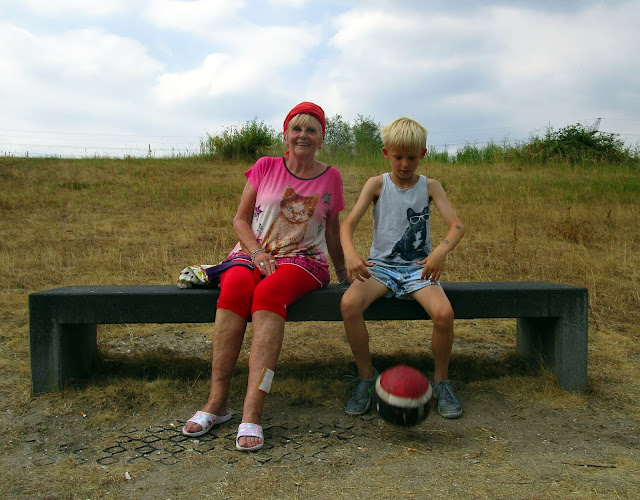 Our T-shirts didn't really fit the reality I had a cat and he a dog ! 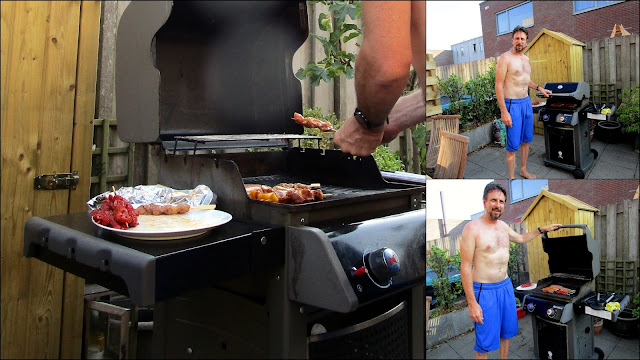 In the evening we had a barbecue which was delicious.

Toby and I are on holidays, the parents have to work ....