1.The summer weather continued also in the beginning of the week. 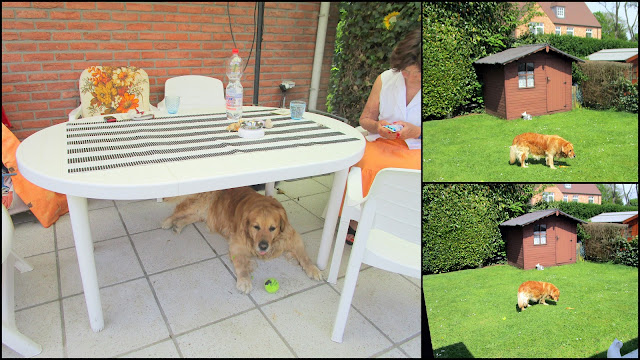 I had moved outside again and Nicole joined me because on her terrace it was too hot. Charlie, after having sniffed in the whole house the delicious smell of cats, played then in the garden and rested under the table. Sunshine and hot weather makes you real lazy, but we enjoyed it !

2. When I came home from shopping I found a parcel leaning against the door.

It was a bench I had bought on Internet. I don't know why, but in my head I had thought the bench would arrive ready to sit on it,  as I had seen on the picture.

Nicole who is a very handy woman looked at the different pieces and said, that's easy we can do it together. She took a screwdriver  and tried. Unfortunately the hole was not at the right place, and after having tried for at least half an hour, I was fed up and told her I would ask Mr. G.

3. The next day, he tried it, also without any success the trouble still was the same, the screw which was not at the right place to fit into the hole. Finally I had the good idea to call Mr. G's young friend who can do and repair everything. In 10 min he was there, with all tools in his trunk (booth) 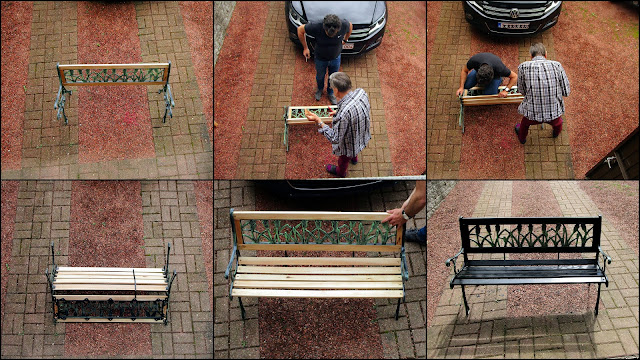 In no time he put the whole thing together but he had to saw a piece of one slat so that the screw finally fitted in the hole ! And then the bench was ready.

I found it a little unfinished and decided to paint it in black which I did and now I am very happy with the result. The bench looks great and is ready to be put in front of our house.

4. The weatherman had announced rain and cooler weather, with the result that the sun was shining and it was still warm. At least warm enough to sit on Nicole's terrace after a nice lunch with salmon at the lunch garden.

5. I have started a new pastel painting and as usual we had a lot of fun in our class. 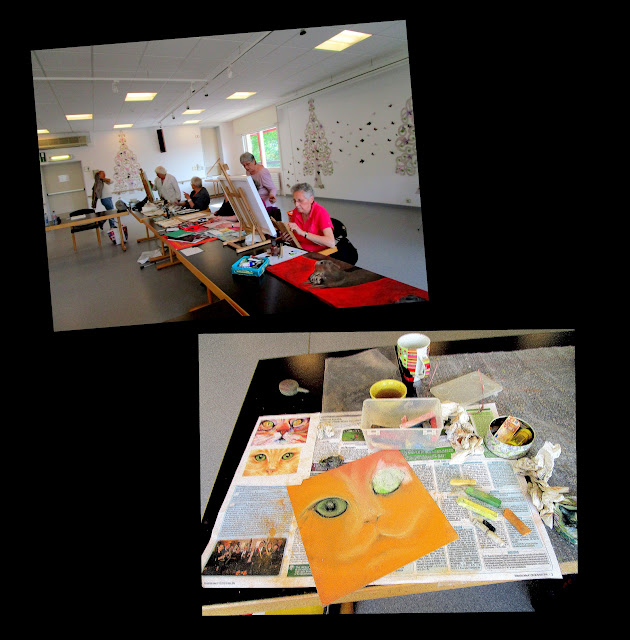 I am just working on the other eye.

There is some garden work to do like planting flowers in the pots and get rid of the weeds, but I just didn't have the courage to do it myself, anyway I noticed that I get back aches. So for once I found Facebook very useful. I  ask the Waterloo Facebook group if somebody would like garden work and help me. I got several answers and finally a young man will come on Saturday morning and help, (or rather do it alone !)

After my last car wash adventure, where I forgot to close the window after I had paid and had taken a shower, I suddenly remembered another adventure with my car cleaning !

As usual I paid the guy, he cleaned my wheels and hosed the car, he made me a sign to go on the rails which would take me into the car wash. So I advanced, but instead of leaving the car without gear and let the car go, I pushed on the accelerator and drove through the car wash in one shot !

When I came out on the other side, I was surprised that my car hadn't been washed at all and that there was a silence. I saw two men stumbling through the tunnel screaming, I don't know what, because I couldn't hear, meanwhile I had stopped the car and the two men white as bedsheets asked me if I had nothing. I still wondered why the car wash had gone so quick and why it hadn't been as usual with the swinging straps. Then suddenly I realized what I had done. I excused myself and wanted to go back and start the whole thing again, but one of the man asked me to get out of the car and said that this time he will go through the car wash himself and that I should wait here at the other end !

I felt quite stupid, still not knowing why I had driven like a flash through the car wash ! Call it absent minded ! 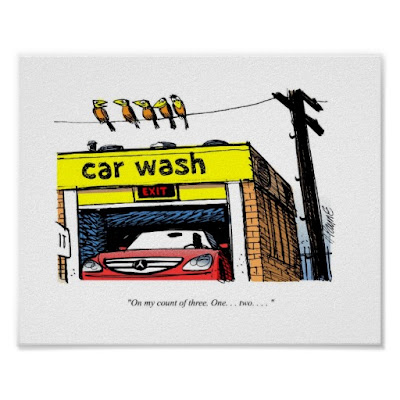 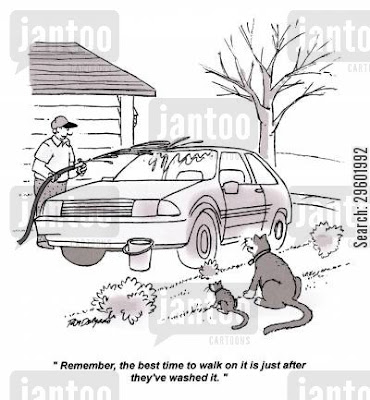 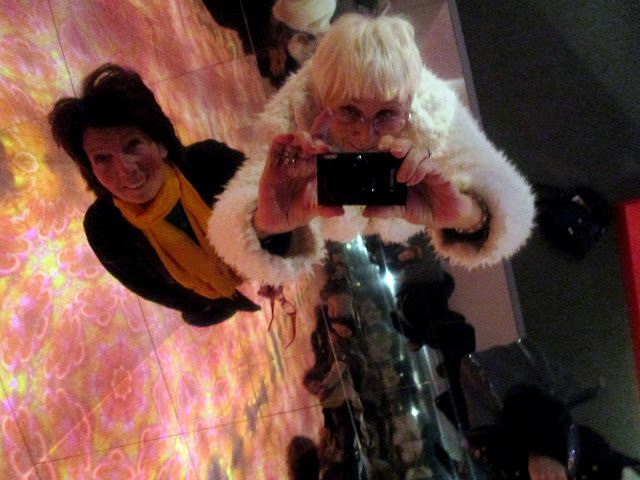 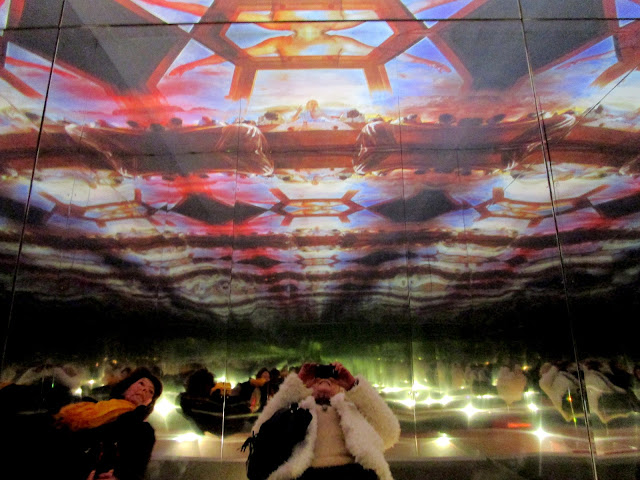 Selfies at the Dali Exhibition

The exhibition aims to promote the painter's artistic, cultural and intellectual work. It tries to contribute to the understanding of the pictorial evolution, thoughts and life of Dali, particularly for younger generation. Read more here .....

We fell from one extreme to the other, from very cool spring temperatures we have now since a couple of days more than 25°C which is quite unusual for beginning May. So we inaugurated our terrace for this year, by cleaning the garden furniture and the terrace. After that we both collapsed and stopped ! 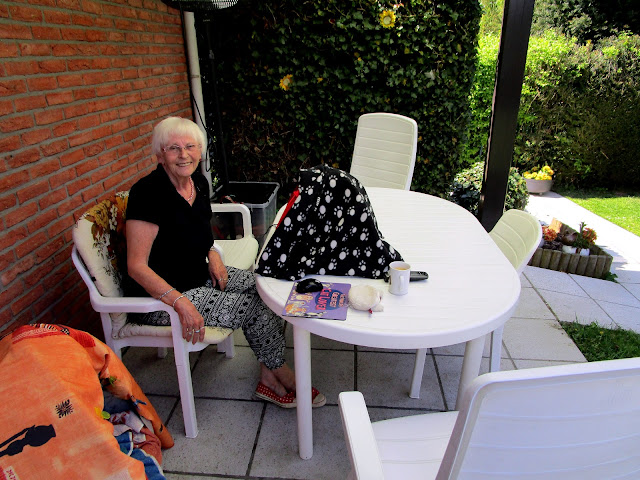 I opened my summer office, and wished it could last for the whole year now !

In the morning I went with my car to the carwash. I had opened my window to pay, and then I drove through the sprinkler. Unfortunately I had forgotten to close the window and got the shower of my life ! I couldn't find the button to close the window because I didn't see anything my glasses were full of water, my hair, my cardigan, my face in short everything on the left side ! I had to stop and clean my glasses and face before I continued through the car wash. At least the 3 men who worked there had something to laugh but me too, I just imagined how I looked like when I drove through this sprinkle thing. I quickly drove home to dry my hair and took off the wet clothes. Mr. G was not surprised.

In the evening we went to the theatre it was the last play of our season ticket. 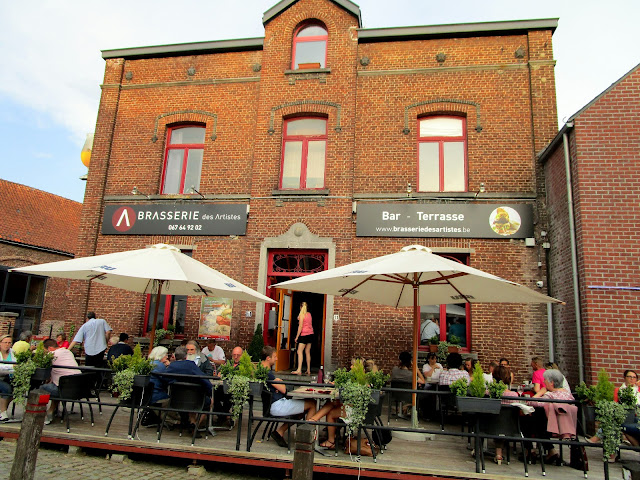 And for the first time since the 4 years Nicole and I are going there, we could eat outside on the terrace ! It was such a nice and warm evening. And the play was so funny ! We had a very nice evening.

On Sunday was Motherday and  all my friends occupied with their children who brought them the traditional flower bouquet. As my son lives in Amsterdam, I got a Skype call. I had always sent flowers to my mother who also lived far away, but apparently boys are different and don't even think about this. But I must be the mother of all cats, because I got a lot of "Happy Motherday" wishes from cat blogs !

I spent the whole day outside, even Mr. G. joined me and we were both sitting on the terrace with our computers. I caught on blogging and he played cards. The cats chased flies and bees ! It was so warm, with a little breeze. A real holiday !