When you think about funny situations in your life, you notice that they are very funny now, but when you were just in the middle of the event it was less funny !

This is what happened to me when we were freshly married.

Mr. G at this time worked in the Hilton room service from 11 pm till 6 am. Therefore I used to drive him to work because we only had one car and it was late ! One evening I had washed my hair, put on curlers and was dressed in a nightgown and bathrobe. Outfitted like that I drove him to work.

On the way back my car suddenly started to stammer, went on strike and stopped. I was sitting there in the middle of the night on the most elegant boulevard of Brussels and wondered what should do now.

First I got out. With my curlers on my head and my bathrobe I really had a very sexy look ! At least there was no risk that somebody took me for a red light lady, looking for rich clients.

While I still raked my brain how to get out of this situation, a car stopped and 4 young guys got out and asked me what happened. With my sweetest, most beautiful smile I told them that my car had given up its soul. One of them looked at it and started laughing. I had ran out of petrol. As simple as that.

Of course I had no money and nothing with me. One guy suggested to pick up some gaz at the nearest station, while the others stayed with me and we were all laughing when I explained why I was in this embarrassing situation. When the helpful boy came back and had filled in my tank, I invited all of them to our home for a drink. I took my car and they followed me and the end of the story was, that we spent a very funny evening together !

This has happened in the beginning of the 70th and I think nowadays nobody would stop for a girl in a bathrobe decorated with curlers. They all would believe that she is a dangerous nutcase escaped from a madhouse or a disguised terrorist as this is very in fashion today ! 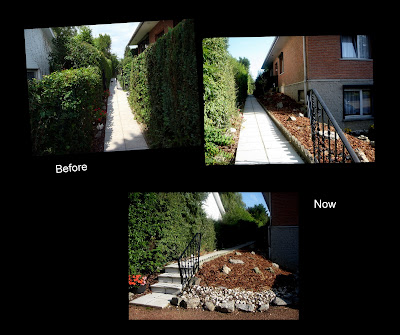 Just before their arrival our "new" garden was ready ! The bushes had become so high that we had to cut it often otherwise you couldn't get through to the entrance. Being both lazy we decided to cut off everything and put some flowers.

2. After a nice weekend, the weather changed and as it rained I decided to take them to one of our big shopping malls in Brussels. 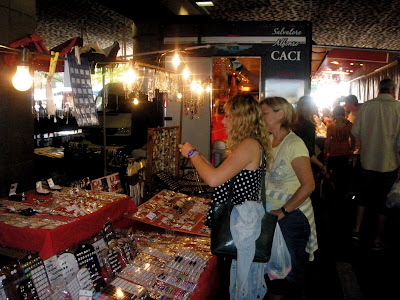 Where both found everything they wanted. Melissa mostly needed clothes as all young girls do.

3. After a thunderstorm it lightened up and we finally could go to the Atomium which is about 20 km away from Waterloo. 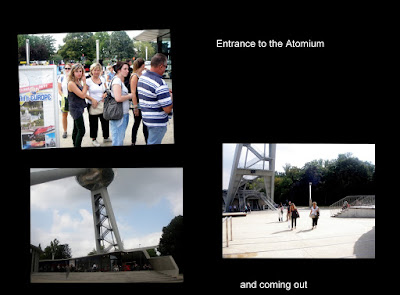 While I waited in the little café they both went up to have a wonderful view over whole Brussels.
Then I showed them also the King's castle and we did a little sightseeing tour while driving back home.

4. The next day we went to the Waterloo city center to a second hand book shop, where Melissa found books for her studies and also some novels and Claudie one she needed too. These books are in very good shape and very cheap and you can buy everything even specialized books. They spent nearly 1 1/2 h in this shop, I have to say I didn't realize either. After that we had a drink and I showed them the two shopping galleries of Waterloo, which are very posh and the prices too ! 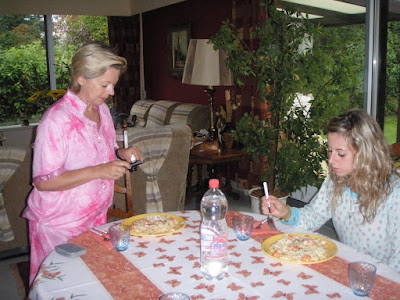 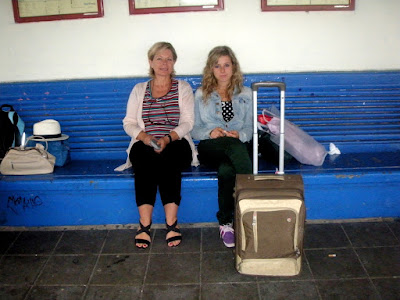 5. The last day arrived and I drove them to the station. It had been such a nice week with them.
I drove back with a little melancolic feeling but was brought down to earth quickly, because when I came back the painter was waiting to paint two awful looking radiators !

STOEMP FOR THE LAST EVENING

During the whole week of their stay in our house, Claudie and Melissa hadn't tasted anything typical of the Belgium cuisine, except of course the wafels. So for the last evening I prepared or rather bought at a cattering service STOEMP. It's typical Belgian dish and the word stems from the Brussels' dialect

It consists of pureed or mashed potatoes, with one or more vegetables, such as onions, carrots, leeks, spinach, green peas and cabbage, seasoned with thyme and laurel.The stoemp is a very popular dish, rural, simple and enjoys wide appeal. There are restaurants specialized in the preparation of stoemp (pronounced stump).

Stoemp is traditionally served with fried white or black boudin (pudding, sausage), grilled bacon, fried eggs, or chops sometimes also with fish. In fact you can use whatever you want even a grilled burger.

I choose the stoemp with carrots together with a sausage. 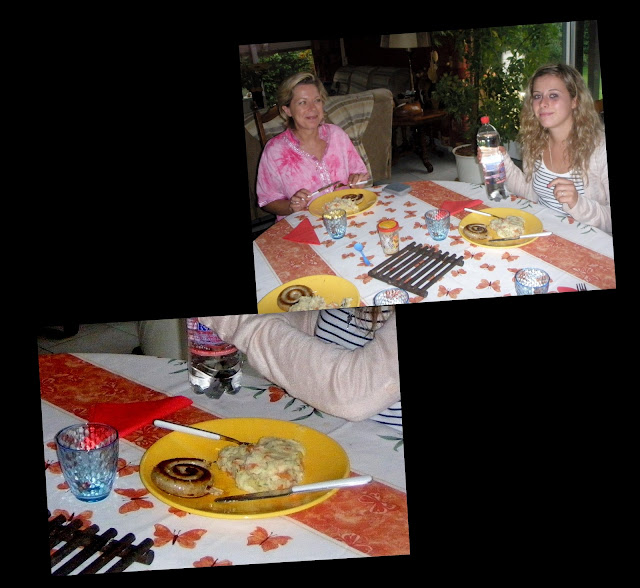 and they enjoyed it very much.

Scarecrows in Battle near Hastings UK


While I was visiting Oxford I stayed in the Balliol College. During the summer holidays, the College rents rooms to guests. I had never stayed in a student's room and in such a famous College that of course I prefered to sleep there instead of an ordinary hotel room. And indeed it was a wonderful experience and such a beautiful place !

Helps you to remember what you have done on the weekend of August 20. You never know if you need an alibi ! If you participate please put the little logo on the top of your post and leave your link.

On Saturday fortunately we had a real warm and sunny day and I took Claudie and Melissa to the center of Brussels.

We visited the Grand'Place of course, Manneken Pis, Brussels' folklore symbol, the famous puppet theatre Toone and the Galleries. We were lucky on this day there was a celebration of the the Pink Elephant Brotherhood with a parade, and Manneken Pis wore their costume. During certain events, he wears a special costume. This brotherhood promotes traditional beers from Melle, near Gent in East-Flanders. The most famous beer of Melle is "Delirium Tremens", known for the pink elephant on the label.

Stroking the saint at the Grand'Place and make a wish, the wish should come true. Both tried. Then we were thirsty and had a drink on the Grand'Place. Finally we were quiet exhausted from all this visiting and went home. I had ordered a Sushi menu which we were lucky enough to be able to eat outside on the terrace on this warm summer evening.

On Sunday morning we went to the Midi Market which usually has around 400 stalls. There were a little less, because of the holidays but still more than enough to see. It was very hot and humid and thunderstorms were announced. Fortunately nothing happened and we had a nice
walk through the market.

Melissa and Claudie looking at the jewelery, and walking through the stalls. Claudie bought a caftan and put it on when we came back late afternoon from another "sightseeing"

I drove her to Brussels to see the Palace of Justice, the "Cinquantenaire" which had been built by King Leopold II for the 50th anniversary of Belgium, the Royal Palace, the Belgian Parlement, and the European Parlement. Then I showed her were I had lived with my parents, and where I went to school before we drove back home.

Mr. G. had prepared Lasagne for us (or had rather bought it to say the truth) and we could eat outside again and sit on the terrace in the garden.

It was a tiring but very nice weekend.

Labels: What did you do this weekend ? Brussels

Today we went visiting Brussels, and now I am a few cm (or inches) shorter.

After a brunch we left full of energy

and here we were at the end of the afternoon ready to return to Waterloo, exhausted !

But we had a very nice day. Pictures will follow of course.