The whole week I was busy to make our apartment cozy. Now I almost did it, only a few things are missing, such as chairs! Our old ones were no longer good. 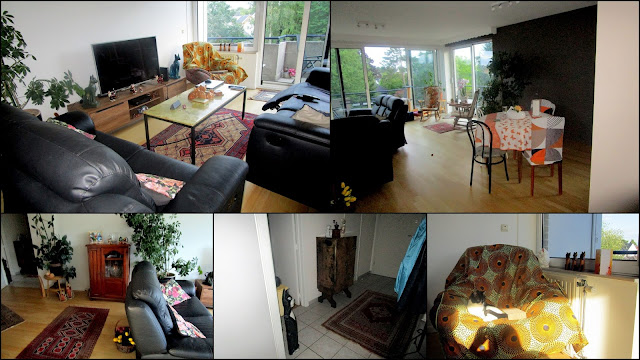 The apartment, living and dining area and entrance 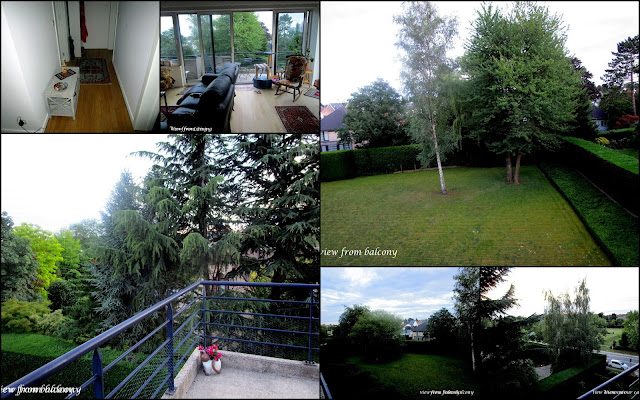 The way to the bedrooms and the wonderful views we have from our living room and balcony ! I was so lucky to have found this new home in the middle of the town ! We could walk for shopping, boutiques, restaurants, theatre, cinema etc. 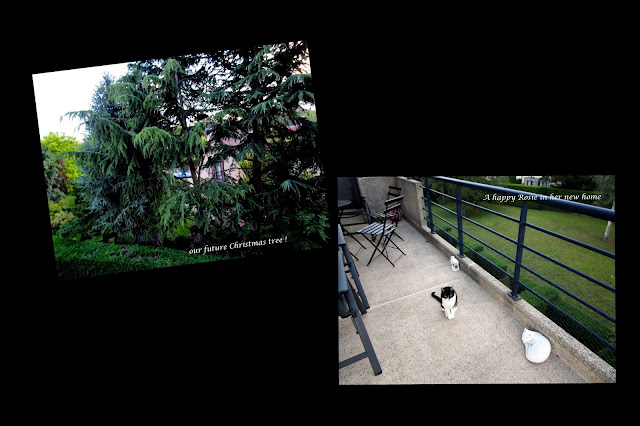 This will be our new outside Christmas tree ! It's huge, you would need balls in football (soccer) size ! Cat Rosie is happy about her new kingdom and enjoys the balcony.

Now the next week will be awful because I have to empty the house, hopefully with the help of my son, Mr. G. is still out of work !

more participants at Susanne at Living to tell the Story.
Posted by Gattina at 09:12 14 comments: 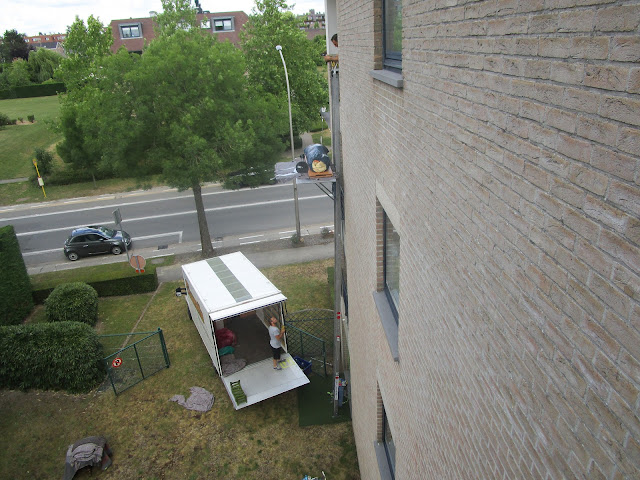 A mini truck for moving the content of a whole house 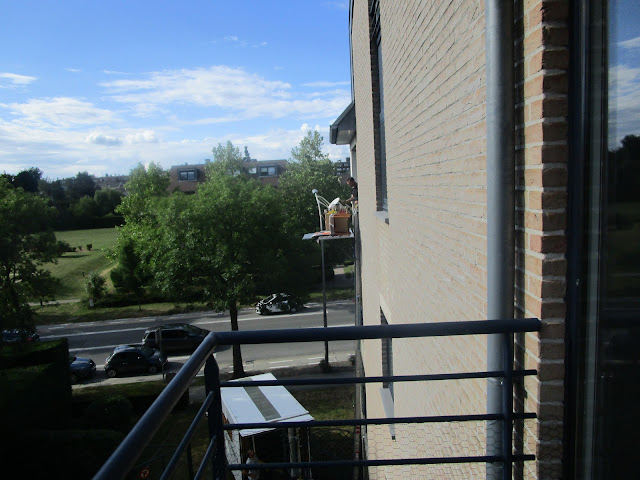 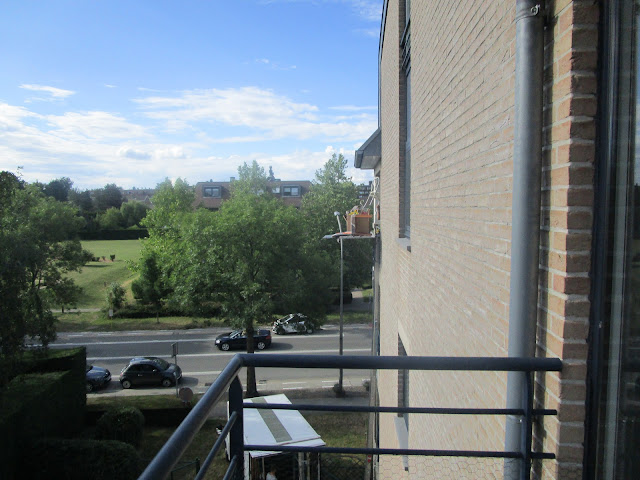 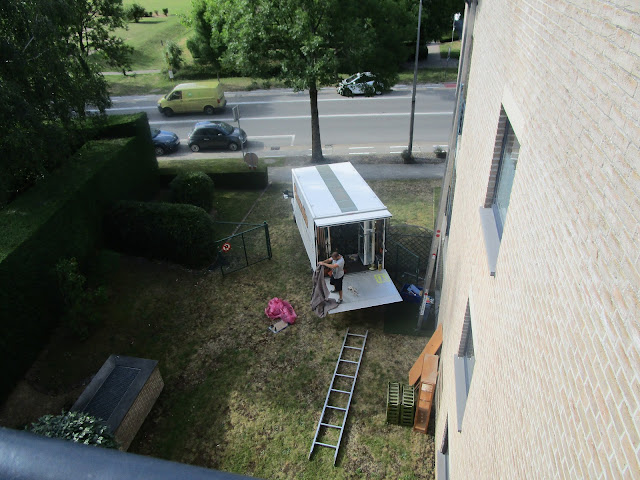 and then the wardrobe fell from the 4th floor ! 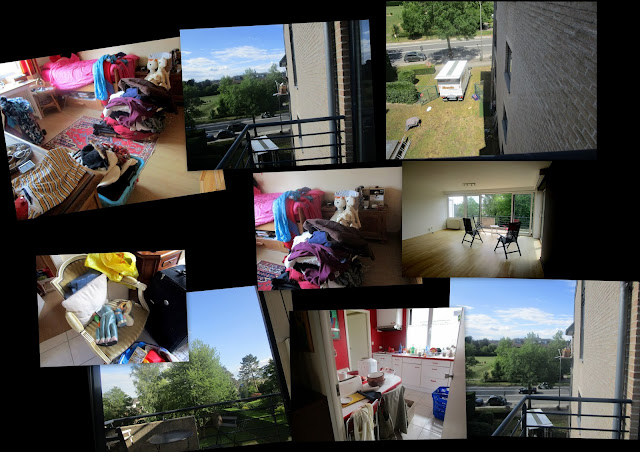 It is almost 4 weeks since we moved and I had no time or desire to write anything, I was so tired!

Our move was a nightmare! Friends had recommended the "best moving company" to me and that's how I came to this company! It couldn't get any worse. First of all they forgot our move and when at 9 o'clock still nobody showed up I called.

At 10 o'clock they arrived, instead of 4 men only 2 and the smallest truck I had ever seen ! Of course, they had also forgotten boxes. It was agreed that they should pack and unpack, instead they had to pick up the furniture twice because the truck was too small for one trip !  And as we live now on the 4th floor to make the catastrophe complete, they dropped my closet  which boke into a large puzzle ! It was like a video gag film.

They promised us another truck and two men more who never arrived. The whole fun lasted until 10 pm and I was exhausted. Mr. G was so excited that a friend of mine took him into her home,  before he went crazy.

That was just the day of the move, I'll tell the rest another time, meanwhile our apartment is almost furnished and we like it very much. 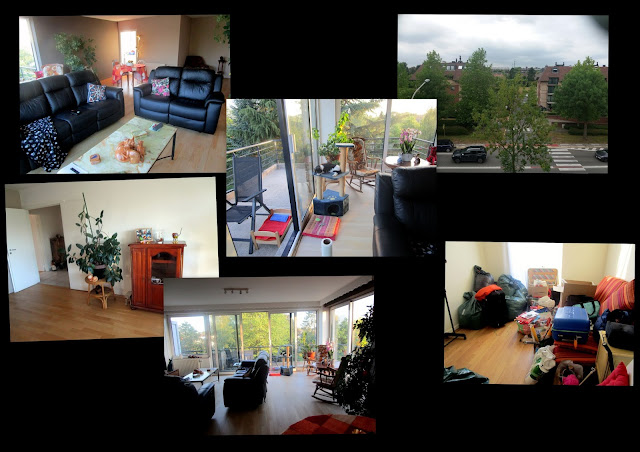 I just wanted to write at least once that I'm still alive!

Now the house has to be emptied, because this "special" moving company took the furniture with them, but not our clothes and other things !! 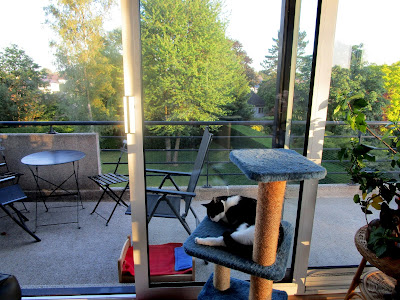 The first one who felt home immediately was cat Rosie who had always been an outside cat ! To our big surprise she is happy on our big balcony !

Once our house is completely empty and handed over to the new owners I hope our good old live comes back !
Posted by Gattina at 18:47 20 comments: