SATURDAY FUN - Did you know ? 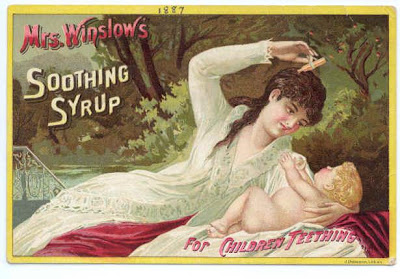 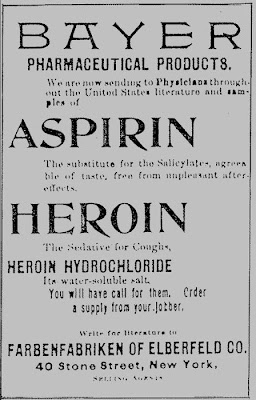 From 1898 through to 1910, heroin was marketed as a cough suppressant by trusted companies like Bayer -- alongside the company's other new product, Aspirin. 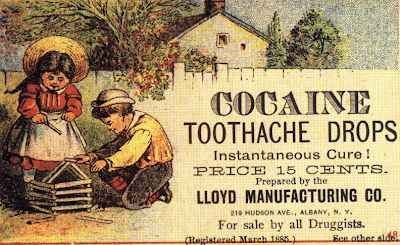 Lloyd Cocaine Toothache Drops
In the US, cocaine was sold over the counter until 1914 and was commonly found in products like toothache drops, dandruff remedies and medicinal tonics. 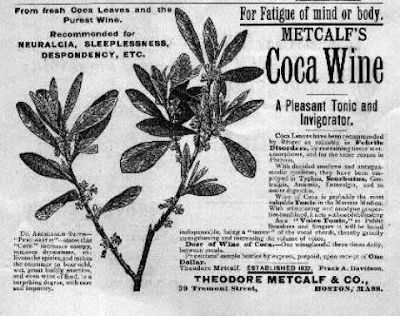 Metcalf's Coca Wine
Coca wine combined wine with cocaine, producing a compound now known as cocaethylene, which, when ingested, is nearly as powerful a stimulant as cocaine. 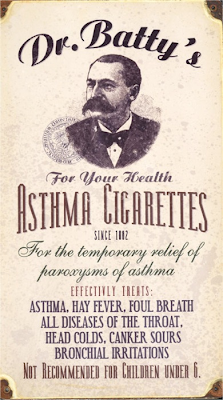 Dr. Batty's Asthma Cigarettes
Cigarettes with unknown contents claimed to provide temporary relief of everything from asthma to colds, canker sores and bad breath. "Not recommended for children under 6."

And now we are going back to organic things .... do you believe we will also take these medication again ? (He, He )
Posted by Gattina at 06:00 10 comments:

1. This week again was wonderful ! I still have my two painters around and the day where the doors of the toilet and the bathroom were taken out and repainted was one of my favorite five days. Fortunately we have a guest bathroom.

2. The microwave works high speed and I buy plates from different sources from Chinese to Italian over to a Belgian Stoemp which we throw in the microwave, once Mr. G (for Italian food) once me for the rest. We are not racists.

4. Between blogging and sweeping the worst dust away, we also watch TV and fall exhausted in our beds. Once I managed to go out with a friend for lunch and in our painting class we saw the movie Les Miserables because it should inspire us for a new theme. I found the movie very nice but it didn't inspire me at all for a painting for the moment but eventually I can always paint a miserable cat.

and here is a visual résumé of my Favorite 5 days.
Posted by Gattina at 06:00 16 comments:

SHOES ARE MADE FOR WALKING ?

I don't know if I am an exception, but I am not a shoe fan at all and I really don't care about shoes. One of my best friends has at least one hundred pairs of shoes of all kinds and each time she sees a shoe shop she absolutely needs a new pair of shoes, boots, sandals or whatever, it depends the season. When I go shopping with her I avoid streets with shoe shops !

Of course I also have shoes, already to protect my poor little feet from gravel, sand and cobbles and in any case especially in winter, also from the cold. I have 4 pairs of shoes for going out, two for winter and two for summer/spring. The rest are comfortable shoes two pairs for summer, two for spring and autumn and boots for winter.

I don't wear high heals anymore I used to when I was working just to be taller than my bosses. It's always nicer to look down on them than looking up ! That's psychological. I am already tall without heels. Of course I pay attention that the shoe looks nice on my feet and fit to my legs. But here also ends my interest in shoes. The worst thing is that I don't even see shoes. You can walk besides me in slippers for 20 years and I wouldn't even realize. I never look at shoes.

Most women think that a shoe is very important to complete the general outfit. I only see the top and bottom but never down to the feet. It also happened several times to me that I went with slippers to the office or shopping, the worst was when I went to the office in pink slippers with a cute cat face and with a fur collar around. I looked very elegant with my "posh" suit.

My mother was a shoe addict and we found over 60 pairs of shoes she had never worn when she died. I read somewhere that being a shoe addict is based on a lack of love in childhood. Anyway each and every thing which doesn't work with people are based on unhappy childhoods. She also was a handbag fan !

There are people addicted to drugs, alcohol and other stuff but there is also a shoe addiction. There are even help groups called the "Anonymous shoe addicts".

Until recent years nobody knows exactly when, shoes were not worn by most of the world's population—largely because they could not afford them. Only with the advent of mass production, making shoes available very cheaply, has shoe-wearing become predominant.

The world's oldest leather shoe was found in a cave in Armenia in 2008 and is believed to date to 3,500 BC.

Definitively I don't belong to this category of women like :

- Christina Aguilera who has 750 pairs of shoes
- Paris Hilton owns around 2,000
- Imelda Marcos, more than 1,000 pairs of designer shoes, according to Time magazine.
- Danielle Steel owns 6,000 pairs of Louboutins (I didn't know what it was !). That's a lot of shoes for a woman who probably spends all of her time at her keyboard.

Overcoming an addiction can be very difficult, but it can be done. Reward yourself. Hell, why not go shopping for a nice pair of … gloves ? 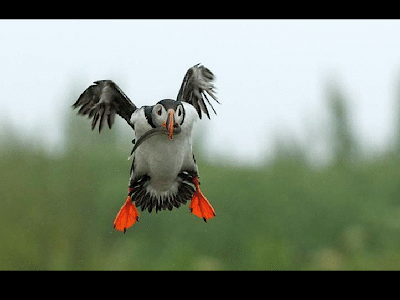 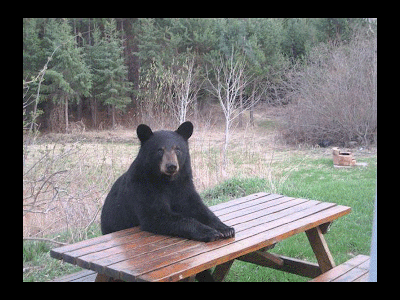 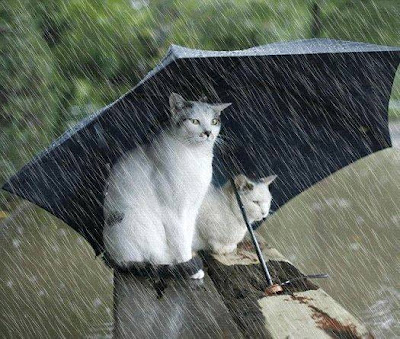 I still have the painters in the house so it was a nice opportunity to escape the mess by driving my neighbor to the hospital for her monthly eye check up. The hospital is located in a quite old part of Brussels.

It's a very famous hospital where all posh babies are born

the inside is very modern

but in the streets you still find the old manor houses, transformed into flats but they have kept the original facades. 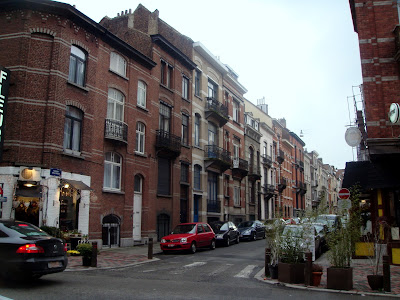 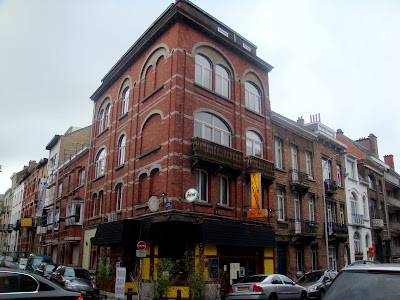 Here at the corner is an old café where futur fathers can drink a few glasses before the big event. 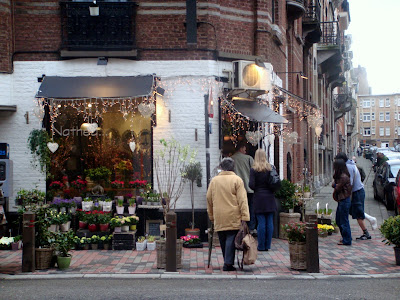 and as it was Valentine's day, the flower shop in front of the hospital was full.
Posted by Gattina at 06:00 13 comments:

Helps you to remember what you have done on the weekend of February 12. You never know if you need an alibi ! If you participate please put the little logo on the top of your post and leave your link.

This weekend is quiet boring to describe because I was mostly into cleaning decoration stuff, giving baths to my ceramic cats, taking off tape from the doors and trying to get rid of the dust. Yes you guess well, I am still in my room painting mess !

I hope it's the last weekend, because I start to get tired and fed up !

In the afternoon I went with Domi to our travel agency and booked 10 days Istambul which we want to visit. I have been there already for 2 days but it was definitively not enough. After the trip was booked I was feeling much better !

Now on Sunday our living room is finished, I only have to put back paintings and decoration stuff. The red wall looks even better than I thought. The kitchen is not yet finished and then 3 rooms have to be painted next week, but I think this will go much quicker.

In the evening Domi, Chantal and I went to our little Waterloo cinema and watched a very funny French movie "Les émotifs anonymes" (Anonymous emotives), because we all needed to laugh ! It was about a very shy man and a woman who tried to overcome their emotional shyness in a group therapy. It was hilarious, but not stupid at all.

Now we are filled up with new strength and can start a new week dealing with our houshold problems, I my painters and Chantal a broken water pipe !

The fact that we have two painters in the house the whole day, disturbs everybody except cat Arthur. He finds it very interesting walks around and checks the work. When the two men have their lunch, he sits besides them and meows loudly because he wants to share their sandwiches !

Last week I had an adventure with my mobile phone which I couldn't find, this week it was Mr. G. He wanted to give a call, took it out of his pocket and looked startled on an unknown screen ! It wasn't showing his Ferrari car picture as usual but something else. Of course I am always the culprit in this house, even when a piece of ham disappears from his sandwich he never would accuse a cat !

He showed me the screen and asked me what I had done. I told him that I haven't seen his stupid mobile for a while and hadn't touched it at all. The screen showed that the mobile was in "silent" mode. He had never used this function and didn't even know how to do put it back to normal. Then suddenly he remembered that cat Arthur had slept besides his computer and on the mobile and probably with his paw had put it "silent".

I switched it back to normal and thought what an intelligent cat we have !

Arthur takes it easy and sits on the mobile phone
Posted by Gattina at 06:00 10 comments: