The moving week has arrived and as I had now bought everything I needed, we had our first Scrabble during the lockdown, as we are allowed to receive more then 4 guests.

In the beginning we kept our masks, but it became quickly uncomfortable because we all mumbled under our masks and had to speak louder and also if we wanted to drink we always had to lift the masks. So after a while we took them off. Anyway we had all been very careful and the worst is over. This time I lost ! But it was so much joy that we had our old routine back. 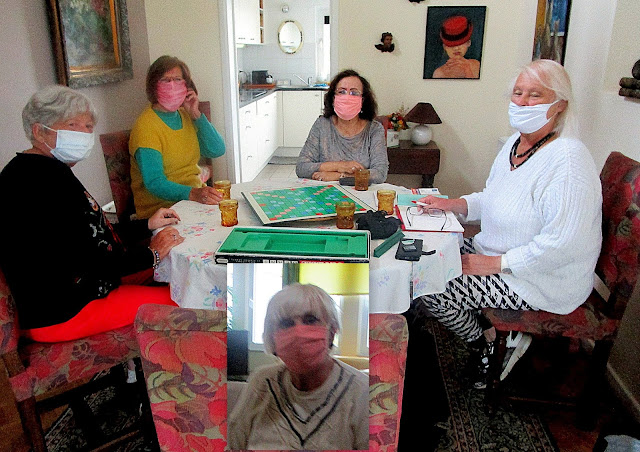 On Tuesday 9th we met with the owner and a specialist who checked the apartment whether there was no damage. Then we got the keys.

The building is so secured that it is probably impossible to break in. Everywhere I first have to hold a badge to a device and then I can unlock the door. When we tried to get the first load out of the car we didn't find the elevator and then it was the wrong one and we stood there with suitcases and caddies and red faces. But finally we found the way back to our apartment. The building is not very big has only 4 floors and 2 apartments per floor. But for the first time everything seems to be like a maze.

Fortunately I had the girls who really helped me very much especially Myriam who can carry heavy things !

The next day the weather was beautiful, I had wrapped my little cats from my cat collection in toilet paper sheets and filled a whole suitcase. They had all been in our showcase. There was also other stuff and finally a suitcase and a caddy was full. Practical is that you don't have to carry them because they are on wheels.

But before we brought them into the apartment, we went to the restaurant where we had been the last time before the lockdown. That was on March 12th and we were locked up on the 13th. It was wonderful we could sit outside and with the palm trees it looked as if we were not in Brussels but on the Cote d'Azur! 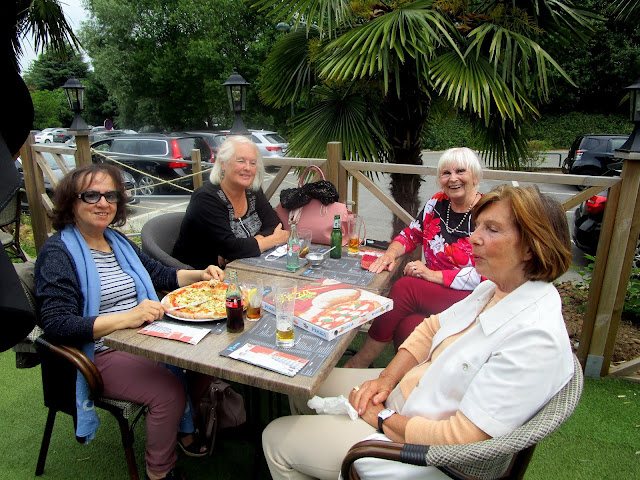 The food was delicious and everybody happy to finally be able to eat outside ! 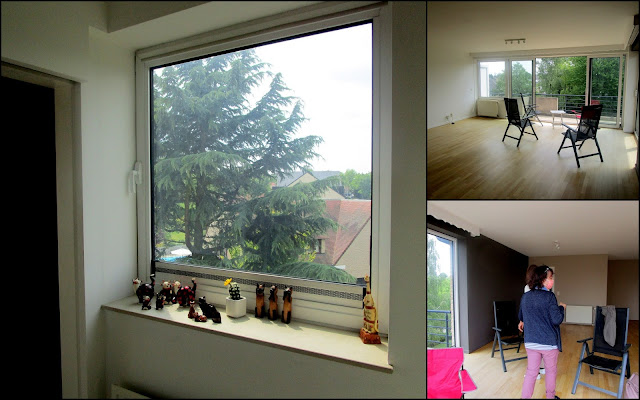 Then we went to my new castle, which K hadn't seen yet and finally stayed there on the terrace in the sunshine and relaxed. I had brought our garden chairs over, but forgotten to buy a bottle of champagne so we just drank water. That's for the next time.

Fortunately I am not in a hurry, because now I feel that I am not the youngest one anymore and that I have slowed down. But this doesn't matter, it takes the time it needs. Anyway I have 3 or 4 months to empty the house, but I want to do it as quick as possible ! 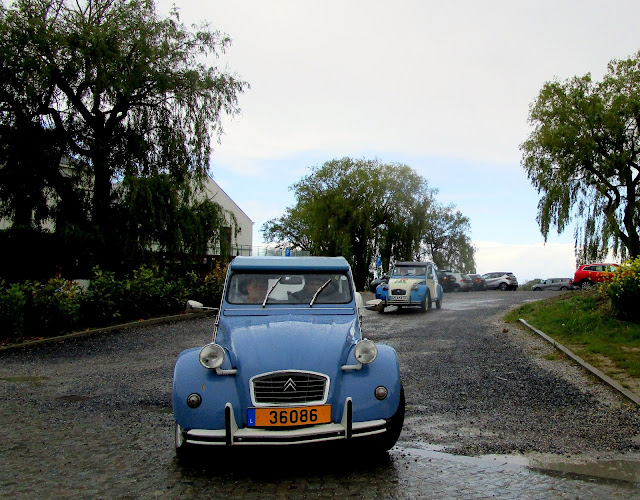 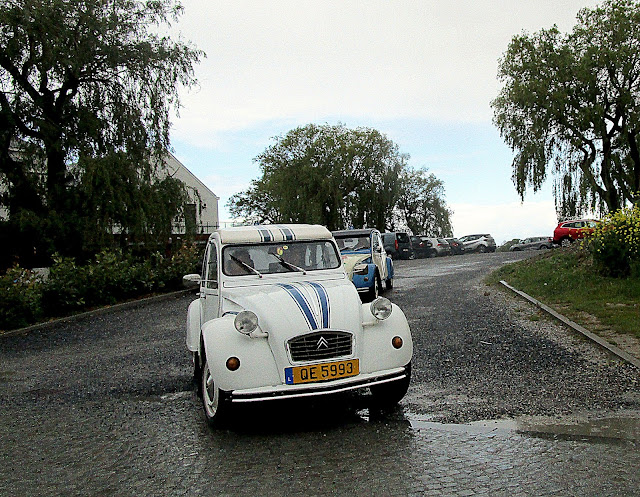 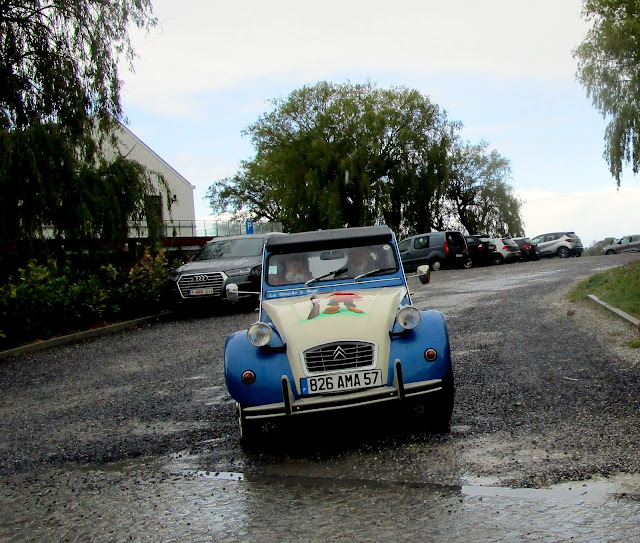 I am moving into a new world ! Tomorrow we will start to empty our house and bring over all small things together with friends and the furniture will arrive next week.

A new life can begin ! That's the first time we will live in an apartment since 45 years in the 51 years of life together. 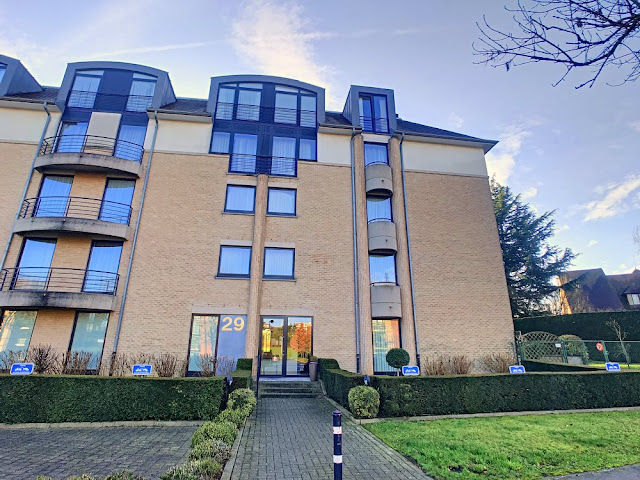 On the 4th floor at the right our apartment goes around the whole corner with a huge terrace ! 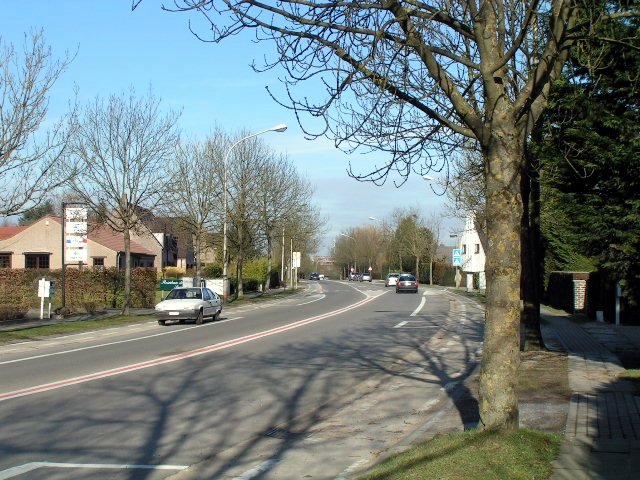 From the front windows we will see the boulevard which leads to the next little town. 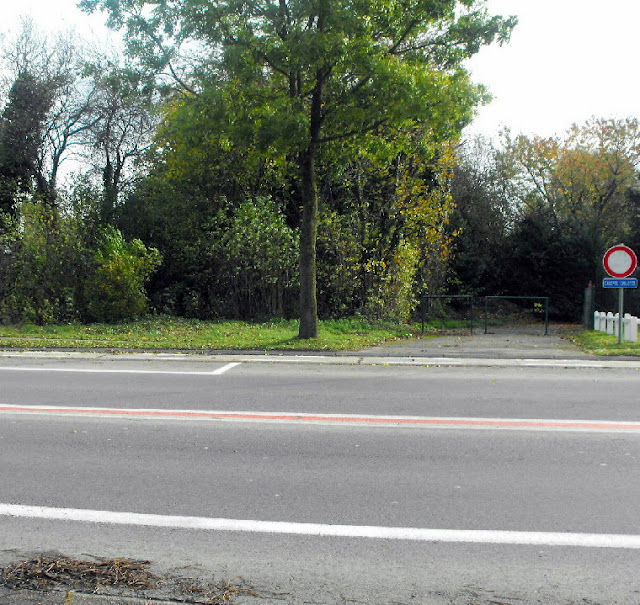 There is not a lot of traffic. Only in the morning and in the evening when people go to work or come back. 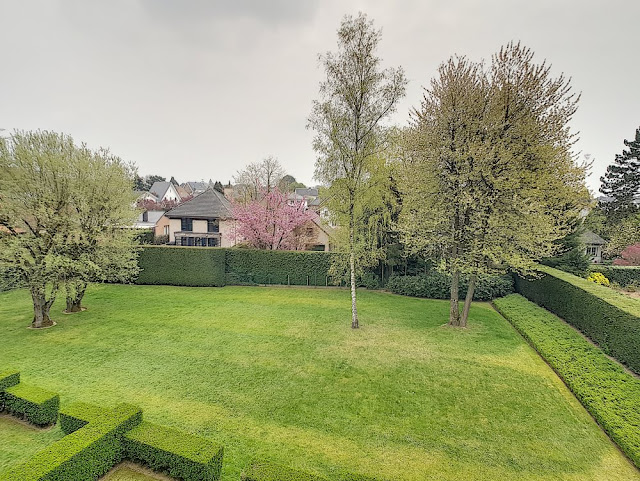 and this is our view from the terrace 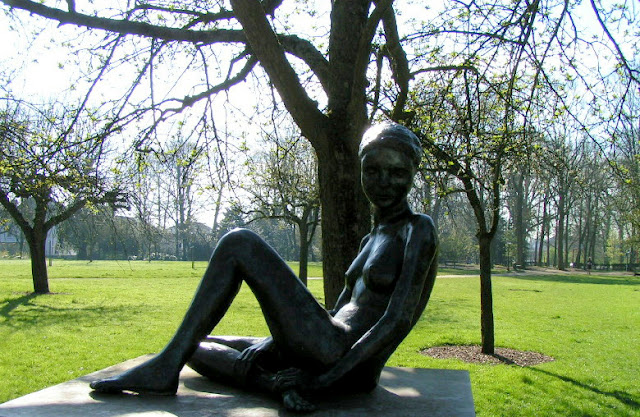 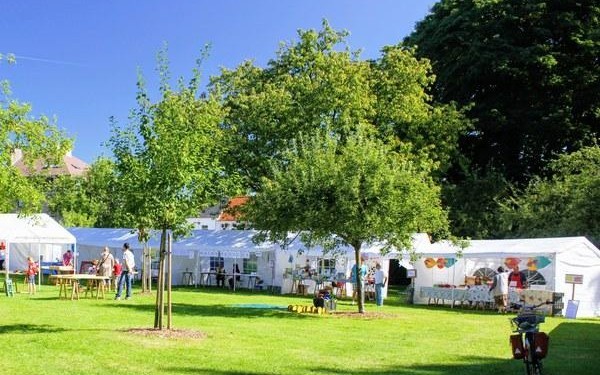 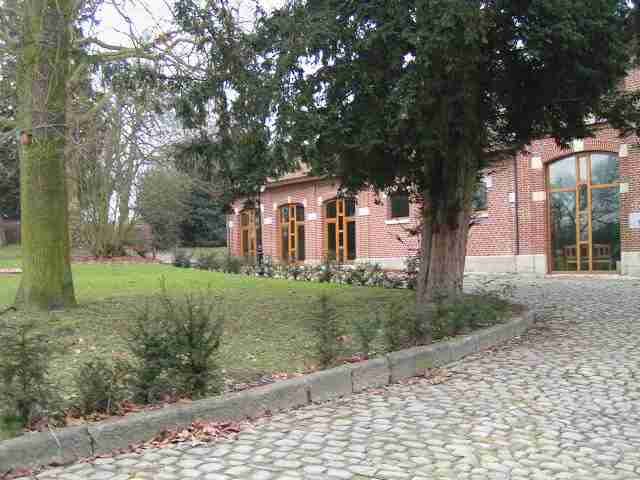 and the exhibition Building 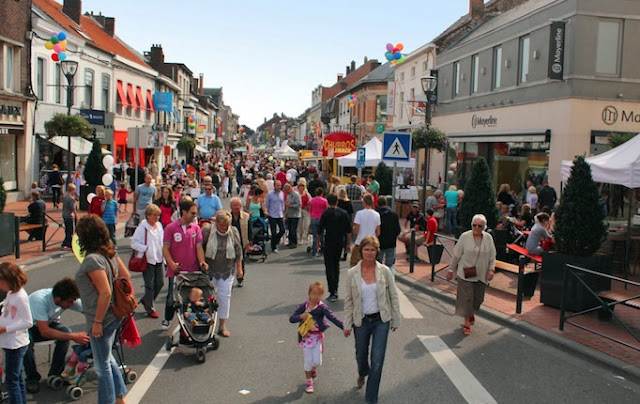 and just besides is the main street ! There was just the National day festivities. 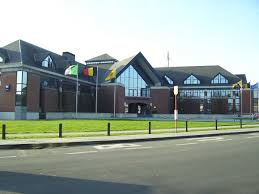 and the city hall, police, theatre and cinema are just there too. 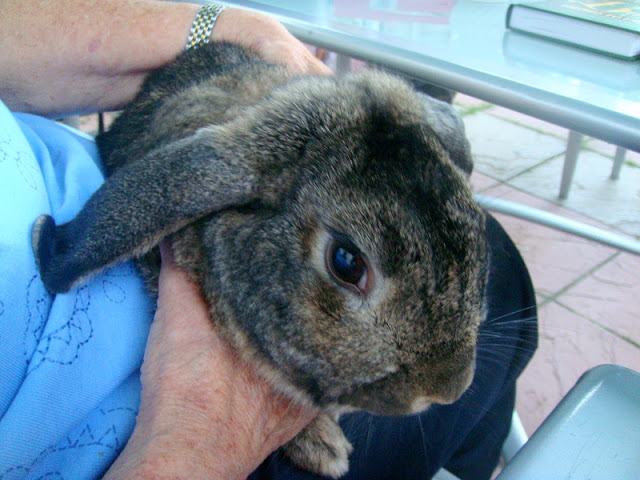 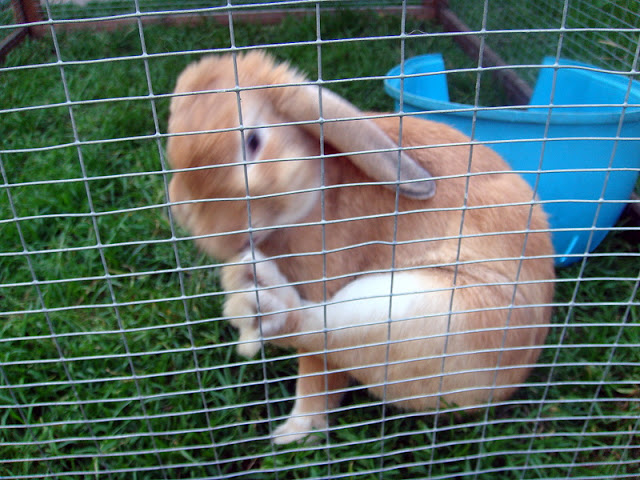 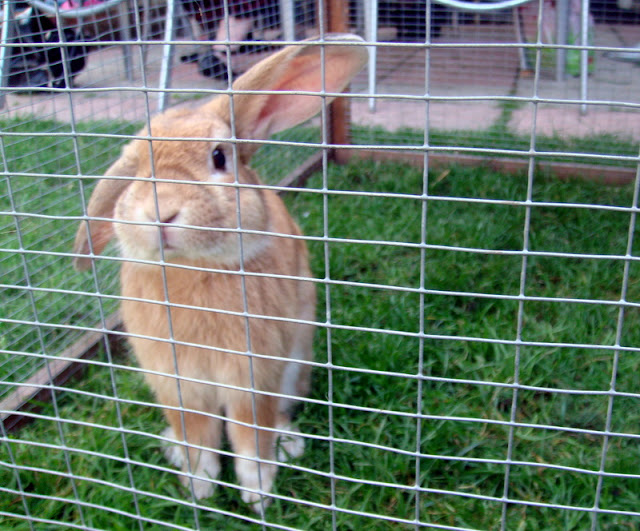 Something very unusual happened in our garden ! I looked out of the window and saw a strange dog. First I thought it was a German Shepherd, but as Rosie the cat didn't move and watched him I started to doubt. Suddenly the "dog" showed its face and I realized that it was a fox ! That had never happened in my area ! 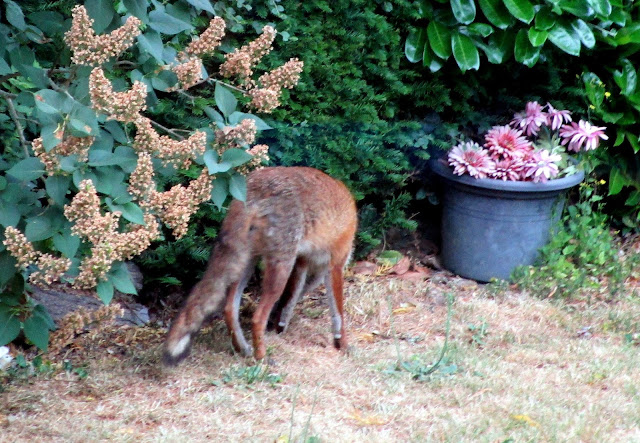 Unfortunately I couldn't take a picture of his face, he just turned his head around.
Probably due to the lockdown he discovers other territories ! Maybe next time I will see an elephant in my garden ! Nothing surprises me anymore !

I had to buy a new Television and a vacuum cleaner, the only things which had to be renewed for the new apartment. Although it was now Saturday I thought I will try as on Friday I only could buy the washing machine, because they didn't have the TV I wanted. 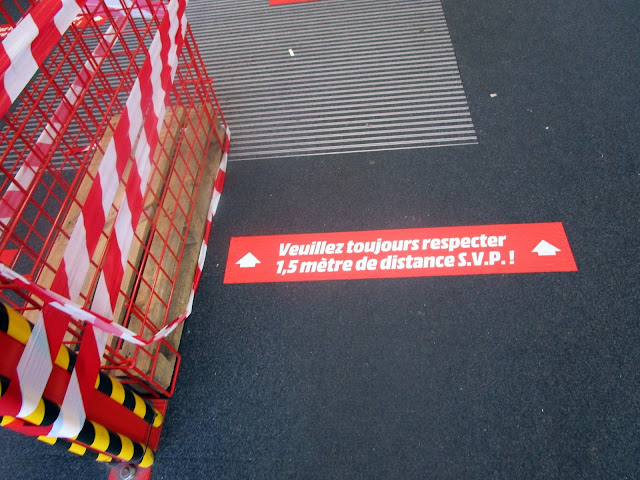 Always keep distance of 1.5 m please ! This was written everywhere 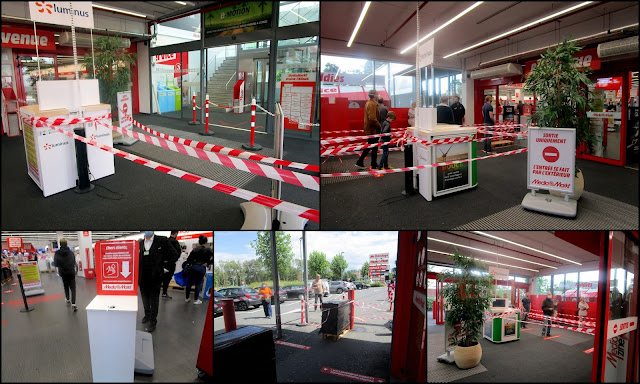 when I saw all these people lined up and the red and white striped ribbons, it made me think of cattle or sheep which have to follow the lines, either to be killed to to be sheared.

It took all my energy to buy a new TV and a new vacuum cleaner ! I returned to my car I didn't have the courage to line up there and wait for hours.

Instead I tried another shop ! Same thing and then one which I don't like at all and which is mostly more expensive too, but there were only 4 people standing and I tried. I followed the others keeping distance and wearing my mask, then I cleaned my hands in the shop and waited until a salesman came to ask what I wanted. Of course no TV all sold out but at least I got the vacuum cleaner ! Then I had to line up at the check out and waited that they had put the carton in my car. That was enough ! What a loss of time.

As all cafes are still closed I went to cafe Nicole who was glad to see me and had my coffee with her. She too hates to go shopping for the moment because it's just a nightmare. 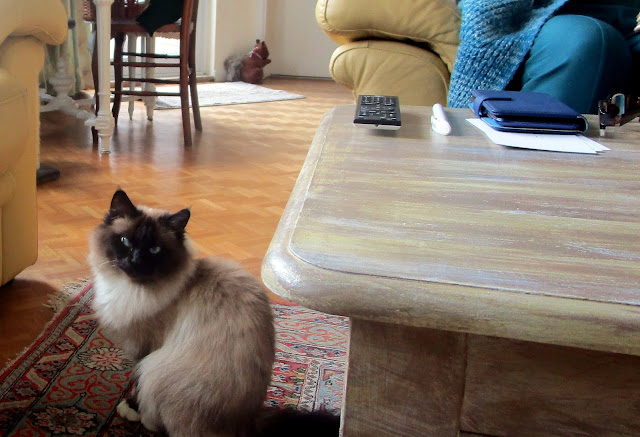 On Sunday we were invited by a friend living in Nivelles the next big town, as now we are allowed to travel inside the country. There is not much to travel as it is so small, you drive 200 km in all directions and you will be in France, the Netherlands, Germany and Luxembourg.

We talked about my forthcoming move and I got some good advices. the afternoon went by very quickly and we had to drive home.

Next week will be very busy when we get the keys of the apartment and can start to bring things over, it's only 3 km far. We will put them in suitcases with wheels so it will be very easy, and probably my friends will all help. Then it is more fun too !