THE SOUND OF SILENCE

If I remember correctly, the reason we can't hear silence is actually because the brain recognises that there is no sound around us and creates a static sound in your ears in an attempt to fill the void. ... The only people that can hear true silence are those who are deaf but they can feel the vibration when it comes to loud music or other very loud noises like a thunderstorm.

I always sleep with earplugs not due to the noise outside because our street  makes as much noise as a cemetery when there are no ghosts wandering around. That's why I always take earplugs along when I travel because I am so used to silence. With them I don't hear snoring or thunderstorms but my own blood running through my veins and you have to get used to that kind of silence which is in fact not really silent.

I also like the silence around me in a wood or at the beach, but these too are not really silent. In the wood there are the leaves making a noise or birds chirping and at the beach I hear the waves.

So it is right, the total silence exist only when people are deaf.


Linking to Linda G. Hill - Silence
Posted by Gattina at 12:34 No comments:

Mr. G. badly needed new slippers as one was broken. This was an opportunity to pull me out of the house and I went to the shoe shop. I found very nice once, also tried a pair of nice silvery shoes for me, but then didn't buy them, paid the slippers and went to my car. Then I made the normal shopping, for the first time in nearly 50 years of marriage I have to buy breakfast stuff for Mr. G. he never had breakfast as long as I know him. But he had  cigarettes. Now during the long stay in hospital, where he couldn't smoke, he gave up and didn't even suffer ! Not to start again I fill him up with 2 waffles, and a ready breakfast pot with yogurt and cereals. No place for cigarettes anymore !

When I came home I realized that I had forgotten the slippers in the shop. I called and yes I had paid and generously left them on the counter !

On Tuesday for the first time Mr. G. went out, took a cane along just in case, because at home he does walk without crutches or cane. He went to the pharmacy and some other places and came back quite proud, but tired. Slowly, slowly he gets back to normal, while I am still like an empty shell which I hope to fill with the time.

The next day I went to pick up his slippers and at the same time I also bought the shoes I had flirted with the day before ! Although I am not a shoe fan, when I saw the once I wore, I thought I look like a homeless. At home I throw them away ! Not the new once of course.

I met with Myriam to see the exhibition of a Waterloo artist, who does wooden sculptures and paintings which we wanted to see. They were really very beautiful ! 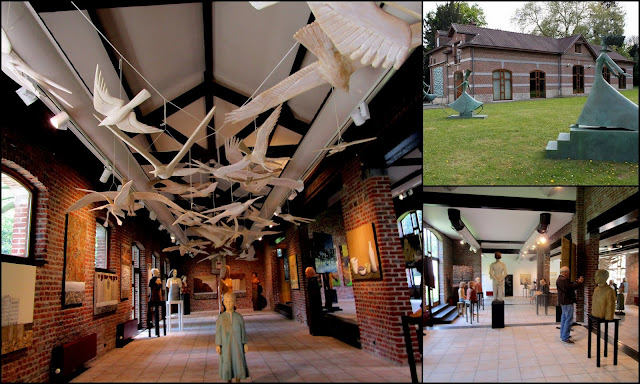 There were quite a few people there for a middle of the week to admire the artwork. He really made wood alive and you could think that the persons he created were almost alive. 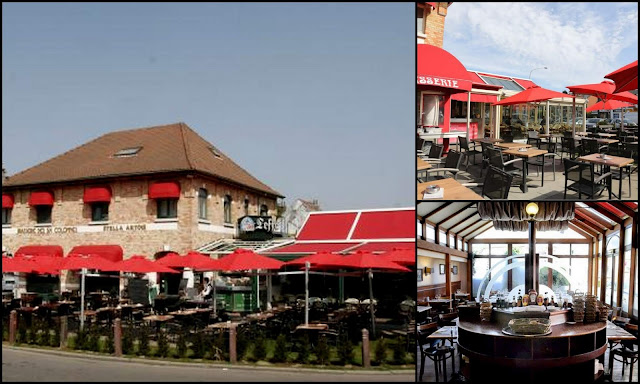 The exhibition had made us thirsty and as the sun was shining we sat here on the terrace of the "Six Colonnes", a very old Brasserie of Waterloo.

Thursday was a holiday and we didn't have our painting class. Instead we went to a Turkish restaurant, as it was rainy and windy and had a very nice meal ! 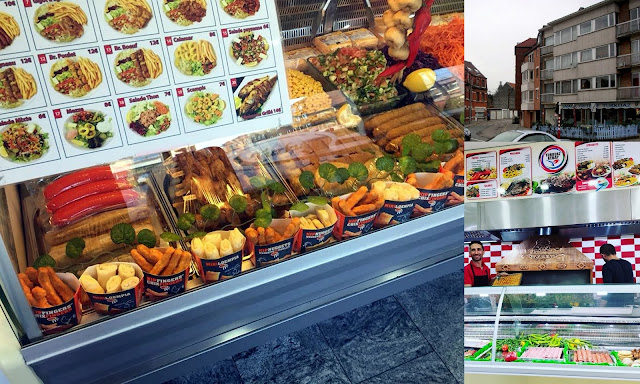 The Turkish owner and the personnel were very funny and friendly and they gave us such big portions that we could hardly eat them !

Mr G meanwhile had his first Whist afternoon after nearly 3 month. He was very happy to see his Whist friends again and also that he managed to drive there and climb up the entrance for handicapped people, the stairs were too high for him.

I ended the day with an invitation of my helper and friend Isabelle who had 2 cards for a very funny movie. That's what I needed ! She knew it ! So we went together and the movie was really very good and we laughed the whole time.

Laughing is the  best therapy when you are down ! 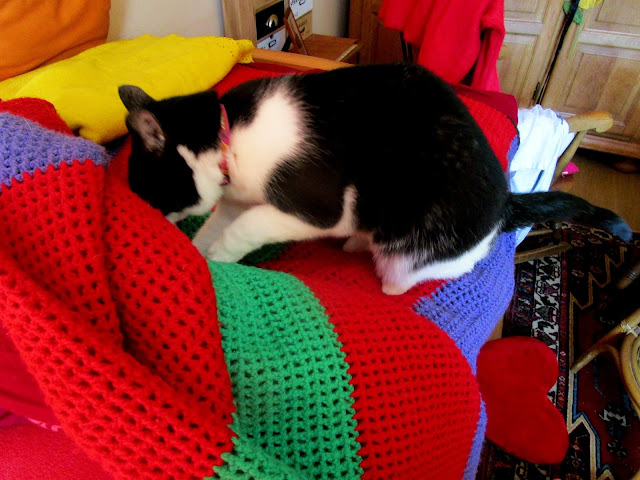 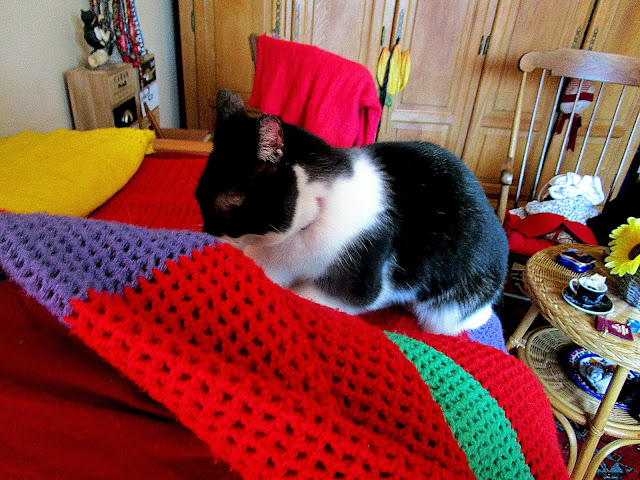 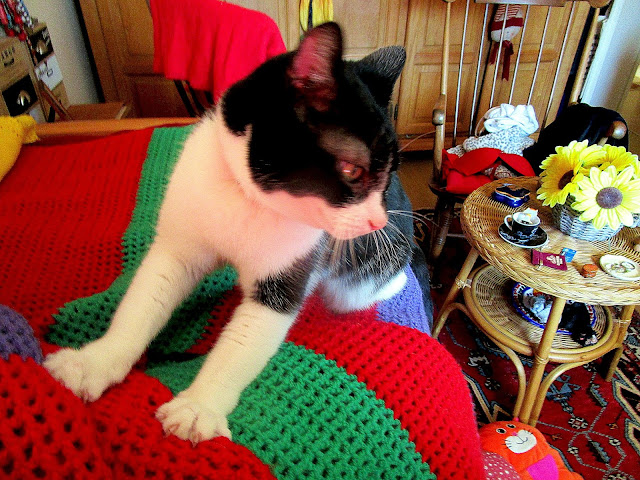 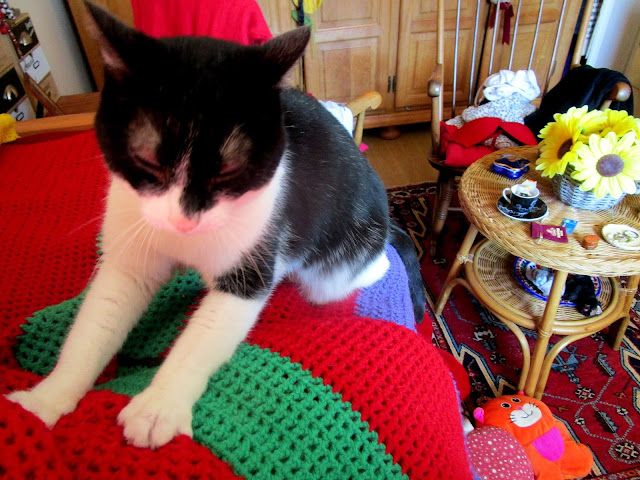 KNITTING FOR A DOLL HOUSE

My cleaning lady, a middle aged Polish woman works already nearly 10 years or more for us. For our birthdays each, she crocheted these beautiful bed covers herself. I was very touched.

That remembered me when WW II was over and Germany in ruins, there was no money at all and people exchanged whatever they had mostly against food. The farmers got a lot of jewelry or oriental rags against meat an eggs and my mother who loved to knit, knitted for the 5 children of a carpenter jackets and pullovers against a doll house for me. The carpenter made a beautiful doll house with furniture, nothing was missing !

I think it is still in our attic, as I had a boy and not a girl, it remained unused. Should be an antique by now. 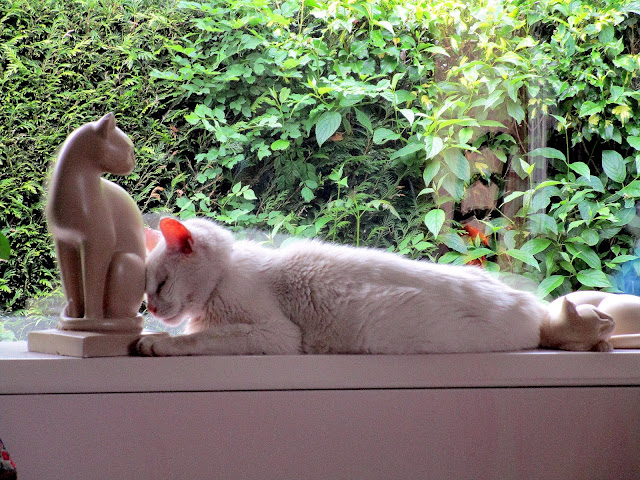 
I had asked Mr. G. at least 3 times during the week, if and when our son is coming to visit him. The answer was always I don't know, until Friday when I heard him telling the male nurse that his son would come the next day.

I had done the shopping for the both of us and nothing else and was in such a state of exhaustion that I couldn't even think how to organize their coming. I was so angry that he had not told me. He probably thinks I am a witch, who clicks with her fingers and everything is done.

Finally I called my son and asked him if they would come for lunch to do the shopping for me, as I really was "out of work" He and Toby finally arrived at 1.30 pm with 2 huge Pizzas, and I was at the end of my strength, because as Mr. G. has become a living watch, he was looking all 5 seconds on his watch, because for him lunch time was at 12 and not a second later. I fed him with a wafel in the meantime and so he was making a big effort to be friendly and welcome them without mentioning the late time !

Finally it was very nice, the Pizzas were very good and we enjoyed our meal.

We updated our son of the last happenings and he put the barrier on the bed again, which Mr. G. had taken off, and that's why he had fallen out of the bed ! He also cleaned the gutters which were full of rotten leaves for which I was very thankful. 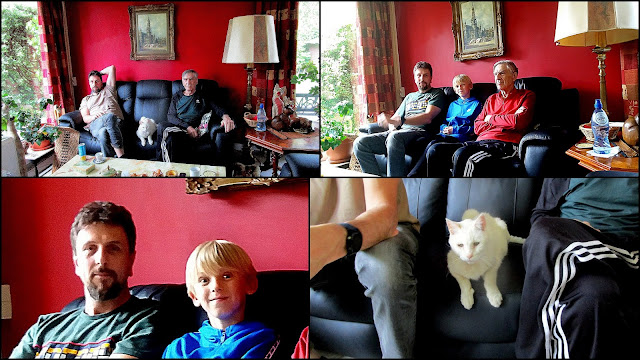 I nearly forgot to take a picture of "my" men. They left us around 4 pm to celebrate the birthday of my son's best friend. Mr. G. was in  a terrible state, he was so tired, that he slept the rest of the  afternoon until I woke him up for supper, which was the last pieces of the Pizza.

Mr. G. when he is tired forgets to tell me things that's how the unexpected visit happened and he also took an appointment for 3 people the doctor, the nurse and the physiotherapist, at the same time ! Fortunately I discovered it in time and called them to fix other appointments. To pay attention to everything is very energy consuming. 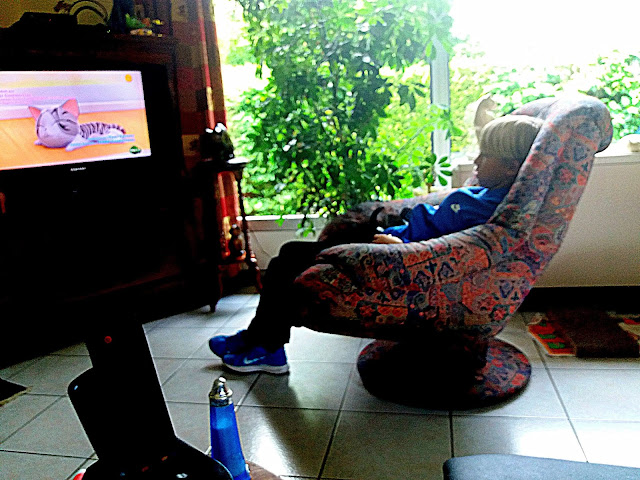 The one who didn't cause any problems, was Toby.  He helped me with the plates and cutlery, and then watched a bit TV. He had played football (soccer) in the morning in Amsterdam, then the route to Brussels, he needed some rest, at least this was the excuse to watch TV. 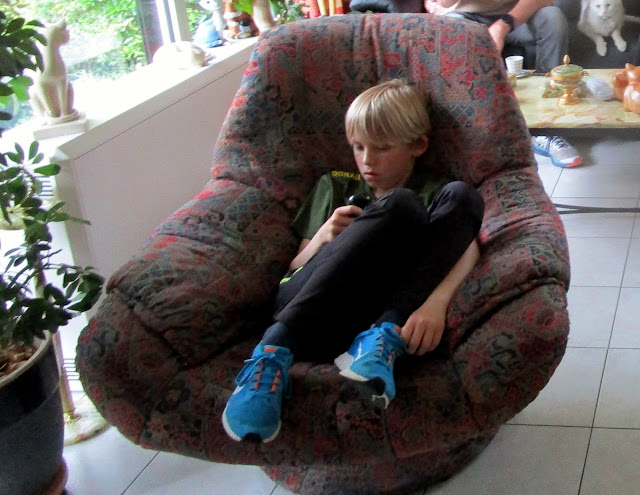 It seems to me that he had grown again. It was a pity that I felt  so weak and had to replace myself by the TV. Hopefully it will get better with the time, when Mr. G. has found his way to know his limits. For the moment I feel like a car without petrol ! 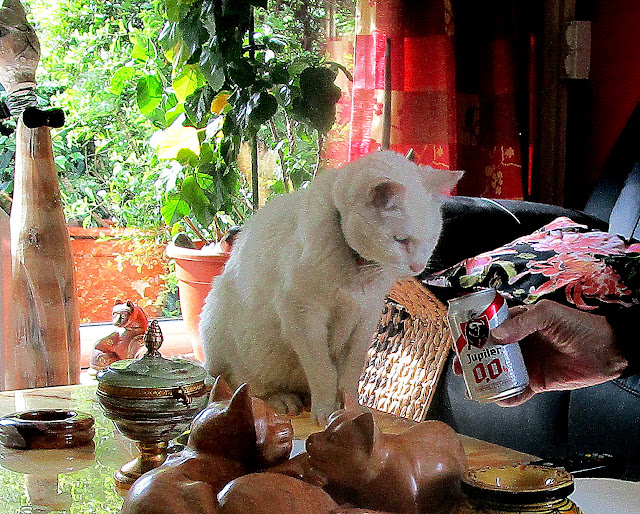 Really happy is cat Arthur, who was sitting between father and son and checked everything what father put in his mouth, even the alcohol free beer !
Posted by Gattina at 22:04 9 comments: