HOW THE LOVE OF YOUR LIFE CAN BECOME A BURDEN

Many women had never imagined that the love of their lives would become a burden, once he retires ! They had imagined leisurely days they could spend together doing all the things they loved to do. But when this day arrives it often is completely different ! 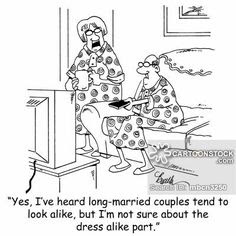 When 30, 40 or 50 years before you loved to spend the whole day with the man of your dreams, it now can become very stressful for wives who suddenly have to face the continuous presence of a "stranger" in the house and he becomes a  burden ! Living together 24 hours a day is not so easy especially when you are not used to it at all because often the wife to had worked the whole day and they only got together in the evenings and holidays ! 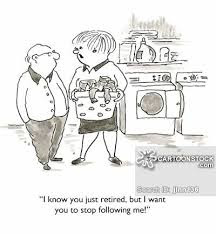 The theory of retired husband syndrome was first established 30 years ago by an American doctor. What he heard all day from wives of retired men was :

‘I’m going nuts’, ‘I want to scream’, or ‘he’s under my feet all the time’, 'yesterday he told me how to fill the dishwasher ! after 40 years'. 'He potters around the house and is always telling me what I should do'. 'As soon as I open my eyes in the morning he asks me what we would have for supper tonight' .....'

The situation can really become a big burden when the husband wants to have his wife with him everywhere. So it becomes a problem when she wants to travel and see the world and he prefers staying home. When she has plenty of friends, and he has nobody the colleagues have all disappeared. Or the other way around ! When the wife wants to stay home and he wants to travel !

Maybe to make the burden less heavy, couples should make more compromises and respect the tastes and wishes of the partner. 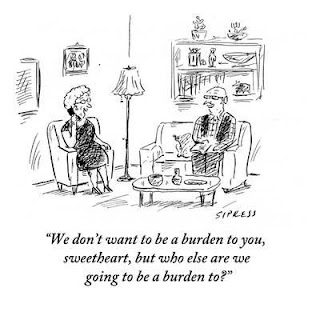 On Monday I was so fed up to be locked in, that I pulled myself together and made it to the hairdresser ! Not only felt I weak, but when I had looked in the mirror and saw a head of a witch without broom, with flat hairs hanging down, I thought this has to change ! The result was I felt much better when I saw the same face but not the same head after the hairdresser !

Unfortunately when I tried to watch a little video on my travel computer, a strange blue screen showed up with a white line and text. I found it rather strange that I should recover something I had never installed ! 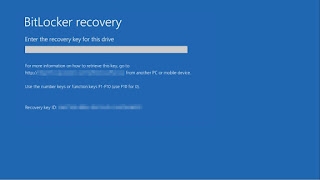 but thought I could easily solve the problem and start my computer, but no way. The keyboard was dead. Mr. G. tried a whole day to get into the computer with no result, he didn't sleep the whole night because he was so upset. As he was an analyst programmer and had always worked with computers since 1971, he couldn't understand. Then he asked a friend whose job is solving problems, nothing to do, he tried everything the computer remained with the blue screen.  Apparently a lot of people have the same problem and if you google you will find claims over claims.

BitLocker is a full disk encryption feature included with Microsoft Windows versions starting with Windows Vista. It is designed to protect data by providing encryption for entire volumes that's the explanation you get. In short it protects so well that you can't use your computer anymore.

After two days the specialist and two others gave up and I had no other choice then buying a new one ! We both were furious, it probably happened during an update of Window 10. There is no other explanation because nobody had installed this thing.

Fortunately I found nearly the same a Lenovo at a very good price. Mr. G. was happy he spent the afternoon installing my things. 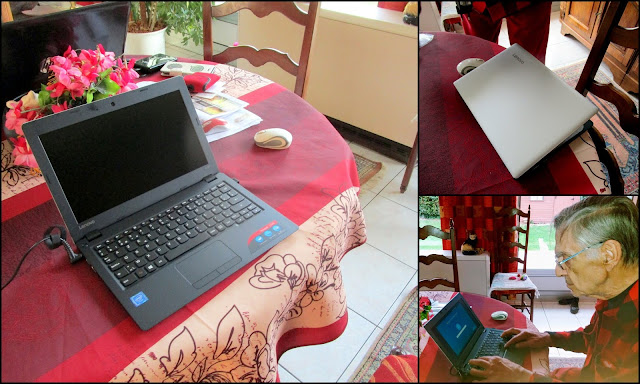 Now I have to put some photos in it.

For once a miracle happened ! After one year  I always had lost the Scrabble game, this week I won !! I thought my friend had made a mistake in adding the points but no, I was really the winner !! 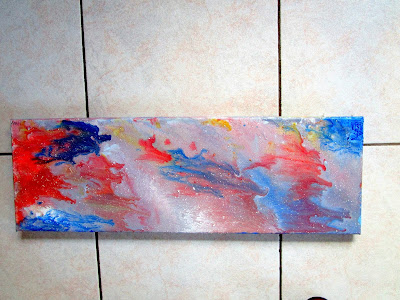 I have finished my first painting with the new method we learned called "pouring" that means pour different colors over a canvas and see what comes out ! I love to do it, because it's very creative and you never know what's coming out. 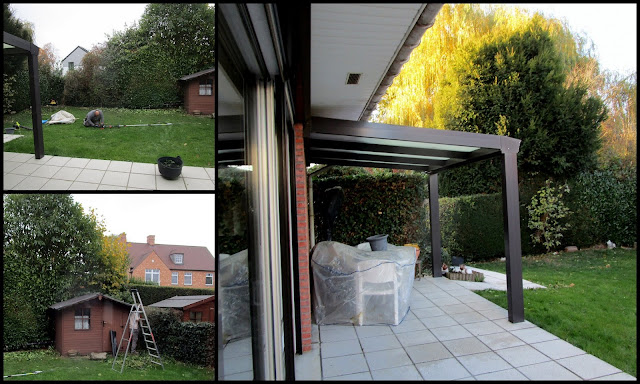 I had two gardeners who cut the hedges, shrubs and pulled out weed and prepared the garden for the winter. I am relieved it was not too expensive and that's one worry less. 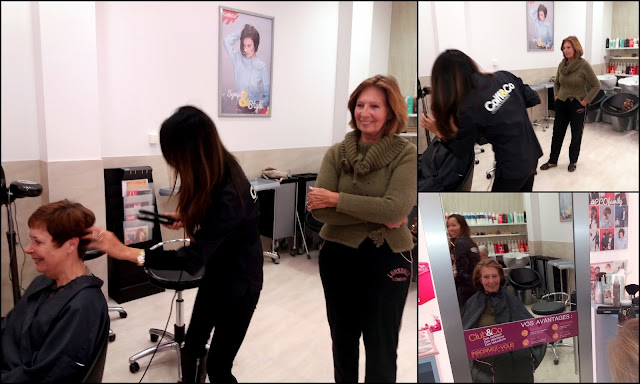 After painting class we went for lunch to the Carrefour and Chantal also went to the hairdresser. Nicole and I just wanted to see how it worked with the result that Nicole stayed too and had her hair cut, I  took the pictures. We had a lot of fun there with the other  clients and laughed a lot. 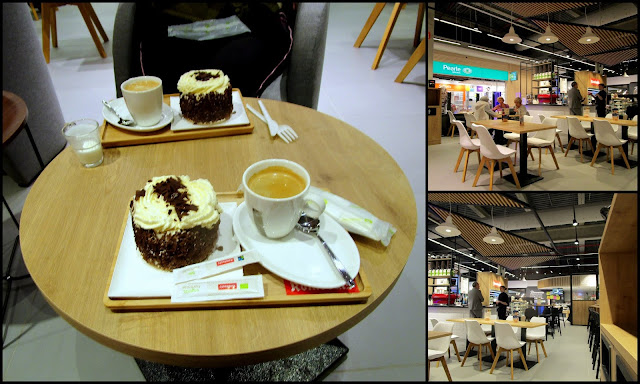 And coming out from the hairdresser we discovered a new "coffee & tea" corner and had a coffee there with this enormous piece called "merveilleux" (marvellous) for 5 € ! 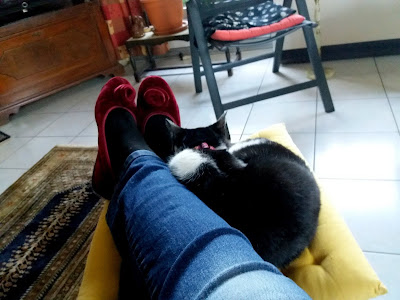 The rest of the day or rather evening I watched TV with my feet warmer !

more participants at Susanne at Living to tell the Story.
Posted by Gattina at 10:18 10 comments: 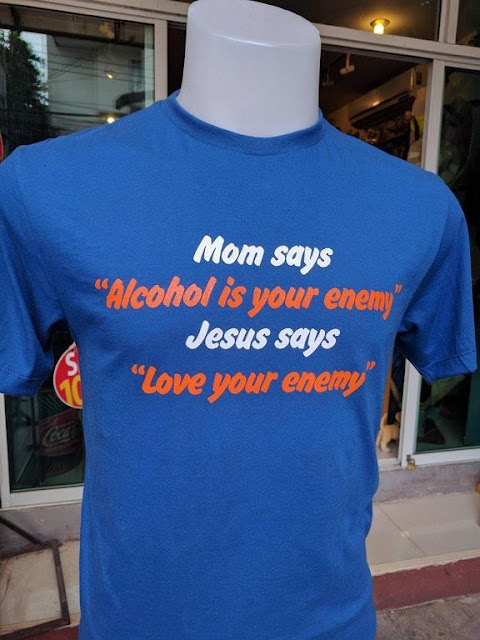 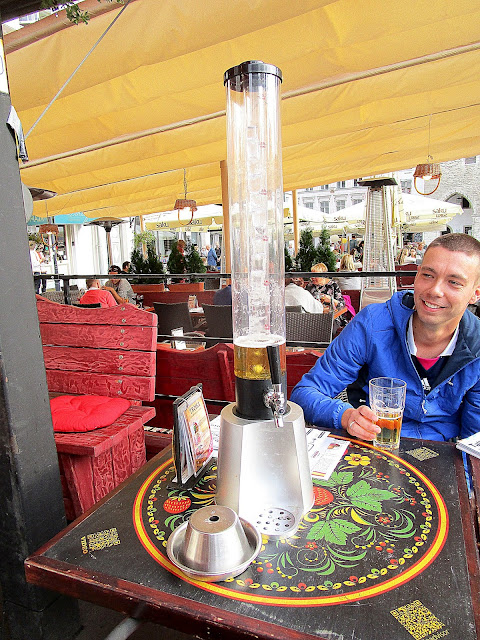 Seen on my tour around the Northern Countries


more participants here
and Image-in-ing
Posted by Gattina at 08:15 7 comments:

We had a long drive this day, from Warsaw to Berlin. Therefore we made a longer stop in Poznan, halfway in the middle. At least we had the opportunity to see the city through the bus windows, but then we had some free time to explore the city. It looked very warm and welcoming.

Poznań is a city on the Warta River in western Poland. It’s known for universities as well as its old town, with Renaissance-style buildings in Old Market Square. It was nearly the end of our 5.700 km trip and we wanted to save some energy for Berlin where we should arrive in the evening. Therefore we concentrated our visit on the old city and the old Market Square, which seemed to us the most interesting and beautiful place.

We strolled towards the market 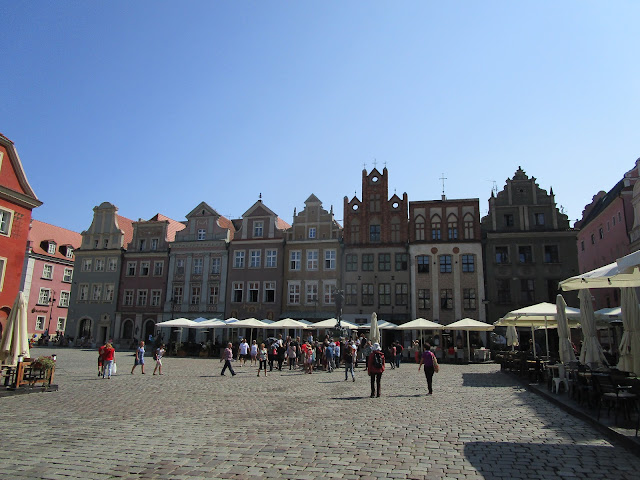 What a lousy weekend ! My friend Chantal and I wanted to go to the most famous animal Park "Pairi Daiza in Belgium which had been voted" Best Zoo" in Europe 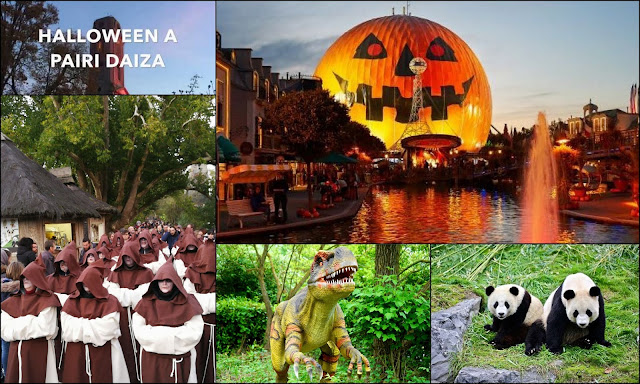 But I am victim of the 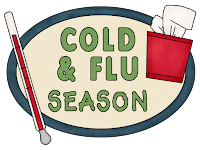 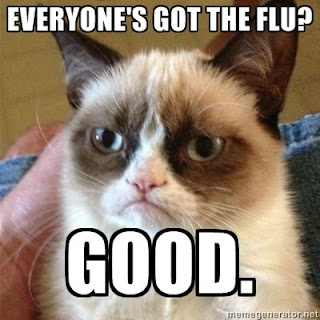 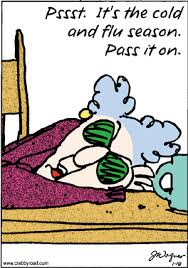 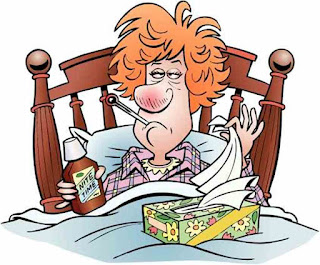