TO WEIGH OR NOT TO WEIGH and Maxine

After the Christmas and New Year festivities, I noticed weight increase and diet became an important subject on blogs. Nearly everybody wanted to loose some weight and nobody wanted to gain some.

In the past I never weighted myself. It didn't came into my mind because I could eat like a horse and my clothes still fit. Until one day when I had my yearly check up at the gynecologist. She asked me to step on the balance looked and stated : You weigh 80 kgs ! (176 lbs) I laughed and said that this is completely impossible and that there must be a problem with her balance. She pretended not, but I didn't believe her.

First thing at home I climbed on the balance and saw the numbers raising. I looked once, I looked twice I put my nose on the scale, the number didn't move it was 80 ! I couldn't believe it ! and my clothes ? I looked in the mirror the front and from the side and realized that I had got a belly and that probably the difference of my normal weight of 65 kg (143 lbs) and the 80 kgs now must sit exactly there.

In my whole life this had never happened ! I was 60 and found myself big like an elephant. But as always when I decide something I drop from one extreme to the other, I stopped cake and chocolote immediately, ate nothing during the whole day and only the half of what I usually eat in the evening or even less. My stomac shrinked and my weight too. In a week I lost 10 kgs ! I wasn't quite satisfied, but it was better then nothing.

As I am quite tall 1.72 m (5.6) people hadn't realized that I had put on weight because I used to wear large tops. But now I saw it. The other 5 kgs took a long time to go away which meant that the overweight I had was really not normal for me that's why I lost it so quickly. Ever since I keep an eye on my weight, but it is stable now as it used to be before and I can eat like a horse again, but I eat a lot of fruits and vegetables, chocolate and cakes doesn't say anything to me anymore and I only eat it occasionally.

I know for some people it is very hard to do a diet because often there is also a psychological background. People eat to comfort themselves and then of course it's a question of predisposition. Some will always be a little round others always a skinny minnie.

The fattest people I ever saw in my life was Madison/Wisconsin. I couldn't believe it. Even the fattest one at home was slim against these men and women. They needed two chairs to sit down ! One for each bottom half. 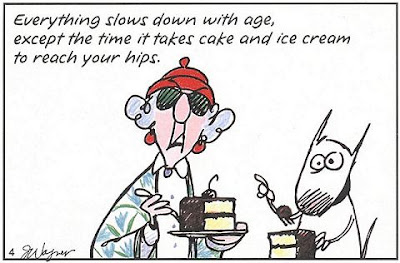 When I open the door to welcome you into my home, the first thing you see is the vitrine with my cat collection and just in front sits a basket which I bought last year just to decorate it for each season.

When I bought it it was summer and so I put a summer decoration. Rosie had just to be part of the picture too.

Unfortunately I forgot to take a picture of the basket with the Christmas decoration or at least I can't find it. Just imagine some golden garlands, golden balls, a golden butterfly and an angel.

After Christmas, when I had enough of the golden stuff, the decoration will look like this until spring. I didn't put any fake snow on it, because we have enough outside (for once) and anyway I hate snow !

Please note that I have never done this before, but with the age all kind of strange ideas go through your head and now I found my happiness in decorating baskets for each season ! I wonder what is coming next !
Posted by Gattina at 06:00 11 comments:

1. Scientists say because of global warming they expect the world's oceans to rise four and a half feet. Buy life boats

2. Climate experts say we should tell villagers in developing countries to reduce the amount of cooking smoke they generate to help fix global warming. They should use electricity

4. There is another solution ! lower the temperature dramatically just by switching from Fahrenheit to Celsius. In some countries it works !

5. Experts say this global warming is serious, and they are predicting now that by the year 2050, we will be out of party ice.

6. Al Gore announced he is finishing up a new book about global warming and the environment. The first chapter talks about how you shouldn't chop down trees to make a book.

7. Al Gore said that global warming is more serious than terrorism. Unless the terrorist is on your plane, then that extra half a degree doesn't bother you so much.

9. We all could fight against Global Warming : just leave your fridge door open for half an hour each day

10. The global warming scenario is pretty grim. I'm not sure I like the idea of polar bears under a palm tree.

11. Since Gobal Warming we have a cold winter and a hot summer

13. Too much appels, not enough potatoes, high prices, low birthrates, etc all is due to Global Warming

Global Warming in our garden
Posted by Gattina at 06:00 9 comments:

MY WORLD - VEERE A LITTLE TOWN IN THE NETHERLANDS

Our host this week Sayre asks :

I want to know your car history. What was your first car? Which was your favorite car? And what are you driving now - and why?

For a European girl I had my first car very early. As soon as I started to work in 1965 I also wanted to have a car and as I earned quite well and lived with my parents it wasn't difficult to save money and buy a used car. I found a Fiat 600 , in white just like the model below

It was a nice little car, although a little rusty underneath and when it rained I had my feet in water. That's why a boyfriend made a hole in the floor, closed it with a wine bottle cork and each time when it rained I took off the cork and the water went off through the hole. That was very practical. This little car drove me everywhere and I enjoyed my freedom. I was 22 and had already a car !

But I also had a boyfriend whom my father didn't like at all. He was an artist and of course not good enough. Therefore he propsed me a deal. I should give up my boyfriend and he would buy me a brand new Volkswagen instead.

I found the deal disgusting and didn't like blackmailing at all.Therefore I agreed to the car but kept my boyfriend unofficially. Father was very happy that I had split up, bought the new car and I was happy to drive around in it with my boyfriend. One year later we separated anyway, so everything was in order, the boyfriend had disappeared but fortunately I had the new car !

I kept my Volkswagen for 4 years and it was also the only car when I married Mr. G. But soon after we bought a bigger one and as we were working in the same street although not in the same company we didn't need two cars and we sold the Volkswagen.

Two years later we moved to Waterloo and there I really needed a car. There are no shops around where we live and also I needed it to drive our son to school and I to work.

I was looking for a used one, not expensive, because all our money had gone into the house building, and

I found the 2 CV ! This was the nicest car I ever had, it was so funny to drive. The clutch was completely different as in "normal" cars, the wheels high and thin which was very good when it snowed. The roof was out of fabric and when it was warm I opened it and the kids got up and waved to everybody. It was real fun. My car was grass green and I had put yellow duck stickers on it ! After the green one I bought this blue one, before they stopped producing it, otherwise I still would have a 2 CV !

After that I had boring traditional cars, for sometime a Nissan Micra and then I started with Opel Corsa.

The first one was black, I had no choice and I always thought I would ride in a funeral car. The second one was a terrible yellow and I was the only yellow Opel in whole Waterloo, so that everybody knew where I was.

Now I have a very boring color, but again I had no choice I bought the car brandnew but out of stock and I had to take what was there.

This is my car today, I am very satisfied with it, but there is nothing special to tell about it either.
Posted by Gattina at 06:00 16 comments:

Last week I went to Kamperland which is a small town of 1940 inhabitants in the Dutch province of Zeeland. I was invited by my friend (see post below) which I hadn't seen for two years.

They had bought a little fisherhouse in the 70th renovated and modernized and it has become this little jewel.

from the street on one side

and the other side in range with the same kind of cute little fisher houses, now mostly owned as holiday homes. There are no fishermen anymore.

this is the view out of the garden. In warmer seasons there are sheeps and horses browsing here.

A quite strange bush

and other little houses

Here we are standing at the entrance door.

After lunch, we made a big walk along the sea and in the dunes

The restaurant which is very busy in summertime, is closed now of course

The lonely man was my friend's husband who shot me while I was shooting him ! But we are both still alive !

for your information
Posted by Gattina at 06:00 15 comments: