1. Monday was the last day for Claudie, in good company time flies by so quickly, it seemed to me that she had just arrived yesterday. I wanted her to taste the good Brussels' mussels so we went to the Lunch garden and she liked it very much. Nicole joined us with Charlie and then we all went together to the "Lac de Genval" (Genval lake). 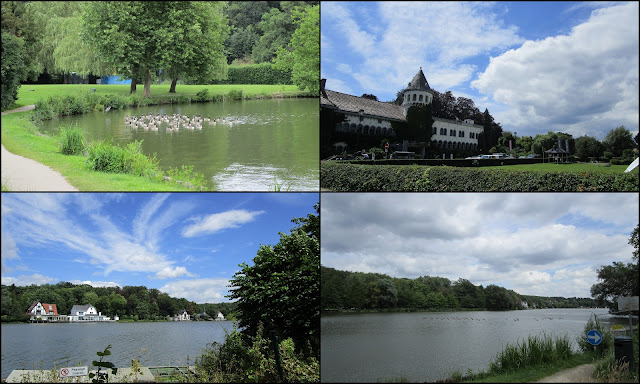 It is not far from Waterloo and a real nice place. We had a coffee there and observed the wild geese.

2. It was still nice and warm and we could sit outside ! 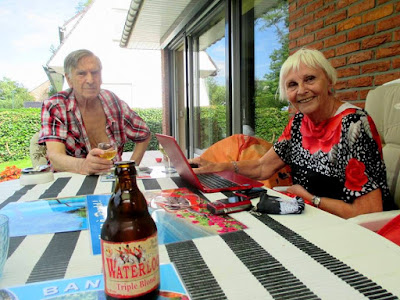 3. My friend and neighbor came over and brought me this beautiful Hibiscus plant for my birthday. 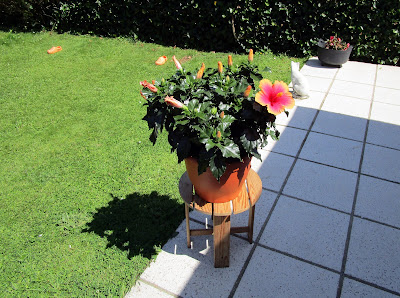 It's a strange plant because the flowers close in the evening and open the next morning again !

4. At 9 pm I drove Claudie to the station, and it was time to say good bye. When she came a week ago she brought wonderful summer weather with her ! As soon as she had stepped into the train, it got dark again, the temperatures fell and now I am singing sitting in the rain again ! We were so lucky that it had been so nice during her stay.

5. I was a little tired and stayed home, I pottered around and worked on my computer. There were lots of things I hadn't done ! 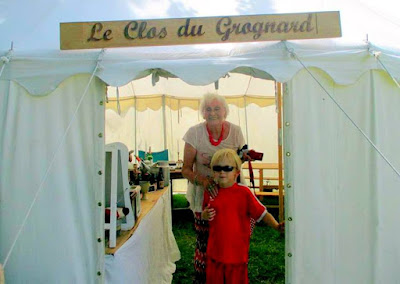 Claudie had taken this picture of me and my grandson, when we had been watching the Napoleon soldiers on Sunday. 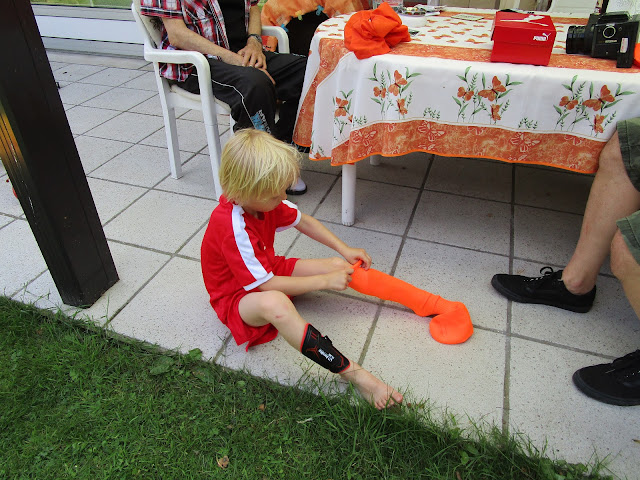 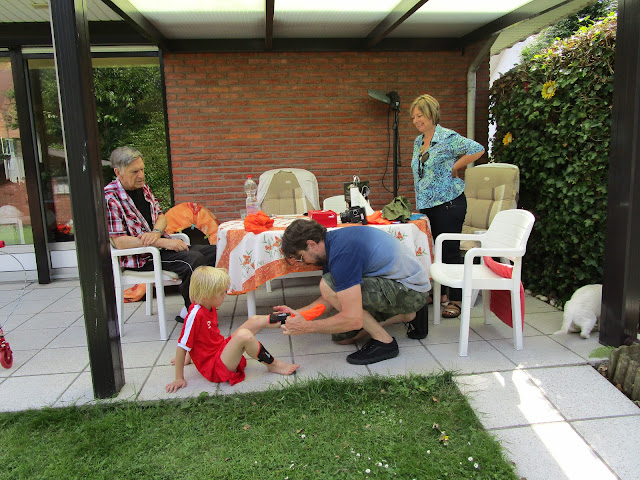 The wonderful weather Claudie had brought with her in her suitcase continued and we went to to the Anderlecht market. 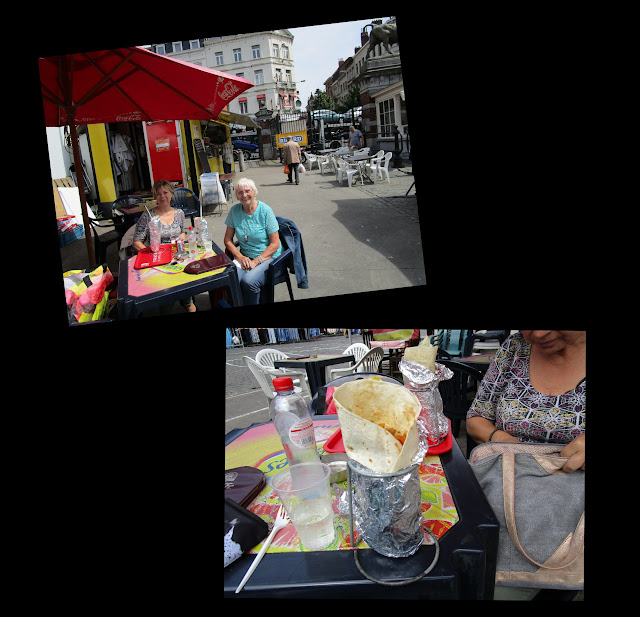 Before we walked around and bought 4 Kaftans, we had this Durum a Turkish speciality. It was enormous, and I first thought it was for two people ! Then we returned home, but before we stopped and Claudie went to the hairdresser.

The next day my son arrived with Toby to celebrate my birthday. They came without my DIL who spent the weekend with a friend.  Toby's new hobby is playing football (soccer) ! He probably watched some Euro 2016 matches and was also influenced by the school. He was never interested in football before. 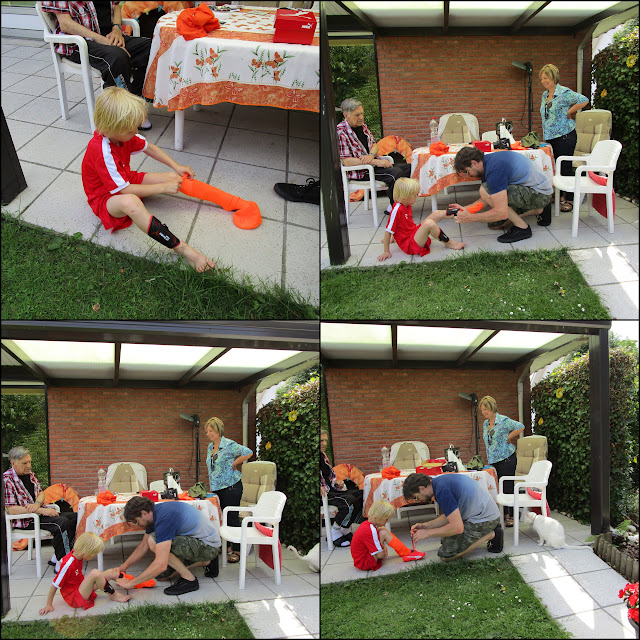 First thing they did was buying a football suit for Toby with the stockings and shoes. 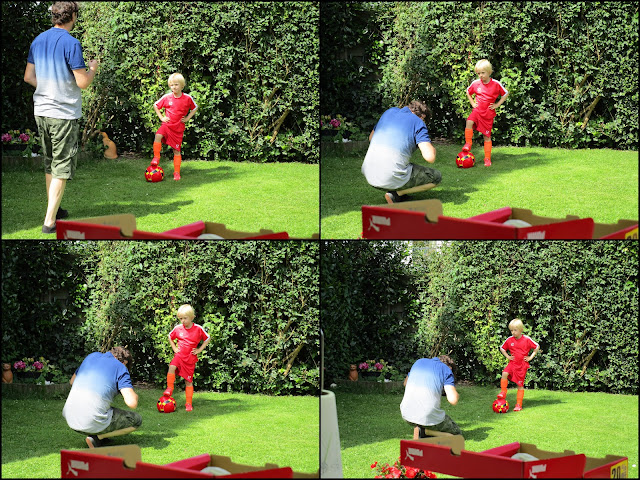 Then fully dressed he posed for his Dad. The whole afternoon they played and he was actually very good. I don't understand anything of the rules and don't know the players either, which of cause was a big handicap for a grandma ! 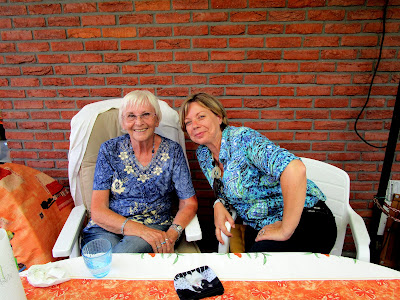 Claudie and I watched them from the terrace 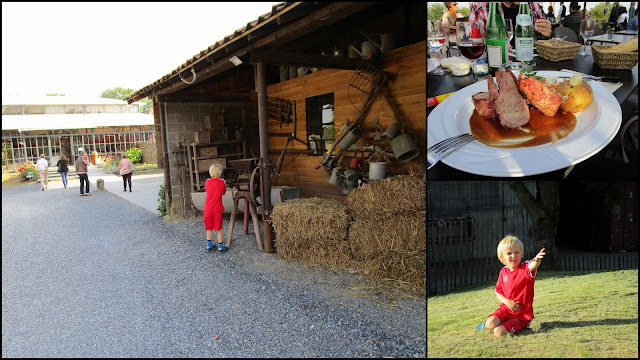 In the evening we went to the Brasserie "L'orangerie du Prince" which I love so much and Toby had a lot of fun with the old machines of the farm and the hey balls. The meal was delicious, the photo shoes Claudie's plate, it was a sucking pig, and she loved it very much !

On Sunday we went to the Hougoumont farm where each weekend a show with Waterloo battle soldiers should take place. On the program was written "Artillery". In expectation of a wonderful show with historical uniformed soldiers, we approached and heard the first canon shot 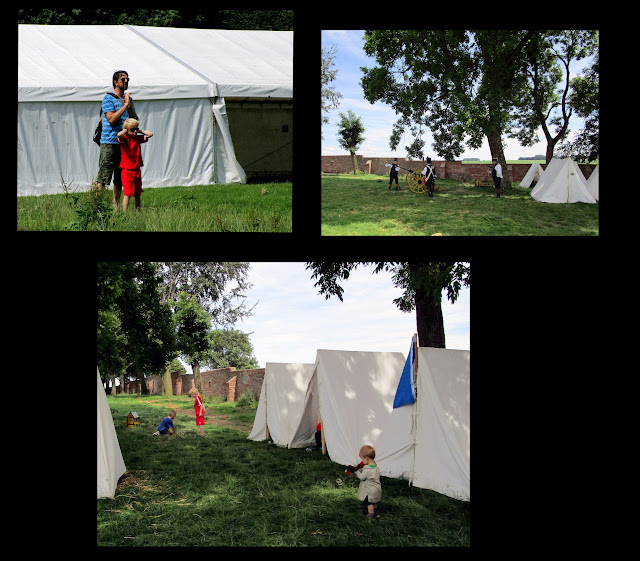 Toby was first afraid, but then he watched closer and played with the soldier's kids. The whole show contained 5 soldiers, a little canon and 3 shots ! 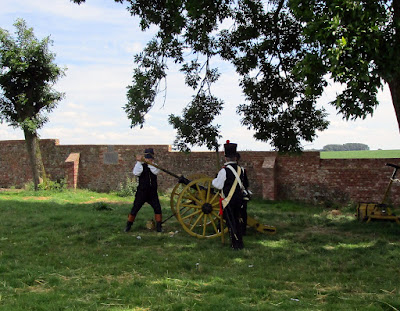 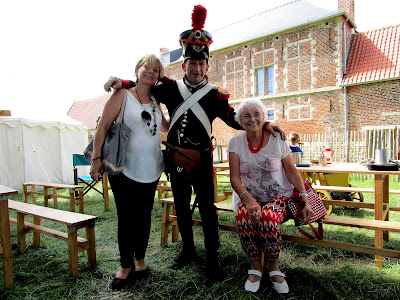 While the tourists went away quite disappointed, we chatted with the soldiers and had a drink with them. 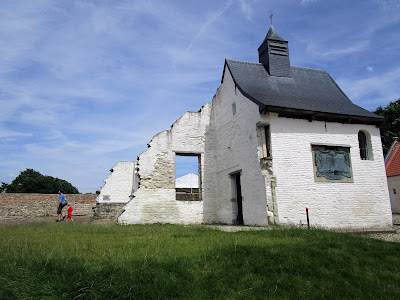 For the first time we could visited the little chapel 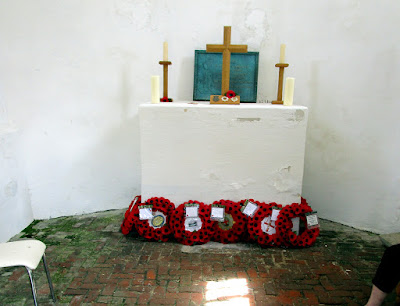 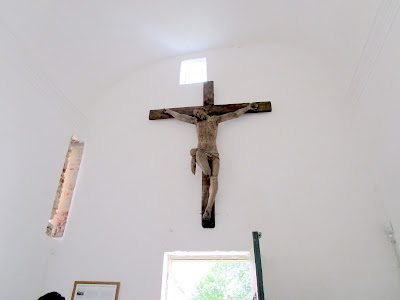 This  wooden crucifix survived an inferno during the Battle of Waterloo. It had been stolen and had then been rediscovered in a Belgian flea market after a four year hunt by Interpol !

The cross stood in the château’s chapel which was burned during intense fighting between French soldiers and the Grenadier, Coldstream and Scots Guards. 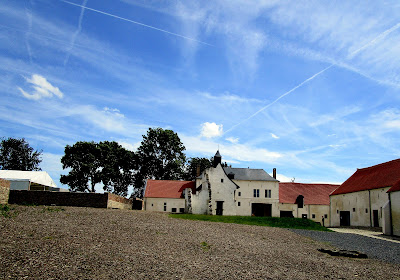 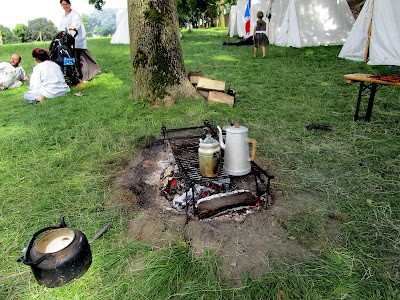 From there my son and Toby returned to Amsterdam and we went home. It had been a very nice weekend !