I thought I would have a nice quiet morning, but after having answered comments, I wanted to start with my Berlin post. It was more difficult as I thought, because after such a long time, I didn't always remember what was on the pictures.

To distract me a bit I surfed a on youTube to find little videos about what we are doing in our painting class the "Pouring". Suddenly amongst the artist videos was one which showed a little boy looking out in the rain with his football in his hands. And then suddenly he had one to play inside ! Immediately I thought that this is the perfect birthday gift for grandson Toby, as he has become a football fan ! 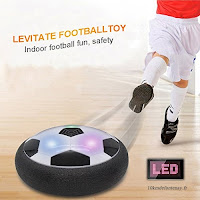 He can play inside without damaging the furniture or the window glass, it can be used as Hockey ball or even for curling with a broom ! So I started to find a shop who would sell it. I spend the whole morning on Internet to find this balloon. It was available in France on an Internet site, but they didn't deliver to Belgium. I found another site in Germany they didn't deliver to Belgium either. The one in Belgium had never heard about this ball. Near a nervous breakdown because all five minutes interrupted by a certain husband, I finally found one in  the Netherlands. I asked my son to order it so it would be there on his birthday Saturday.

This time it was my turn to receive my Scrabble partners and I had been again in the English shop and had bought a cake with fudge, an apple crump cake and a caramel cheesecake. They were delighted nobody had ever had fudge or the apple or cheesecake. 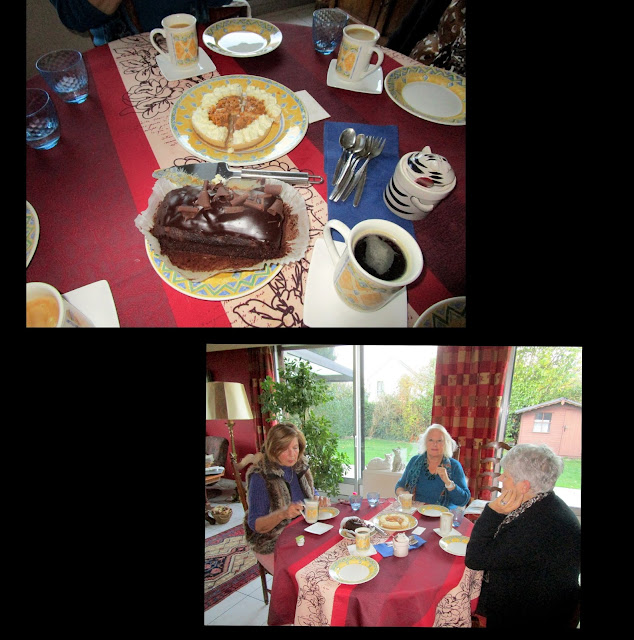 Chocolate fudge and cheesecake and it really was delicious, fortunately they left some for Mr. G !

I lost again, but at least we had a nice afternoon, because the day had started bad again ! I wanted to make a cup of coffee, with my Senseo coffee machine, it made half a cup and then gave up its soul. Just the day when I had the girls for coffee !

I jumped in my clothes and went to a shop to buy a new one. I wanted the same ! Surprise it costed the double after 3 years ! So I choose another, which is much better because it also makes capuccino, espresso and normal coffee. I could inaugurate the new coffee machine with my friends ! 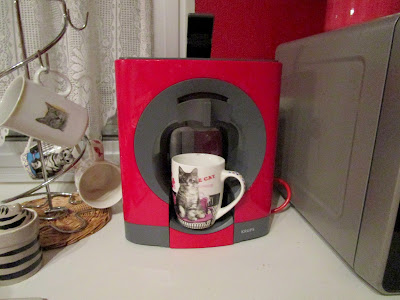 On Wednesday the new sofas should be delivered. I just went to my aqua gym, while Mr. G. stayed home in case the truck would arrive. Nothing arrived not even in the afternoon. Or yes, something arrived .... an email telling us that they had loaded the sofas in the wrong truck and it would only arrive tomorrow between 8 am til 10 pm !!! We stayed at home for nothing, and I had some shopping to do !

Finally this morning I got an email that the sofas are on the truck and we could follow on Google map the way of the driver ! Great !

I had time to go to my painting class where I had done a "pouring" painting, which was dry now. 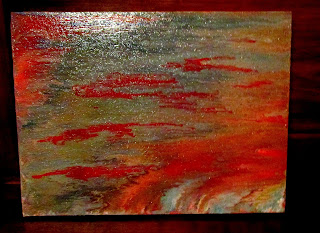 I swear I didn't kill somebody ! You never know what is coming out when you pour the colors over the canvas !

When I came home the truck was near and arrived in half an hour. In no time the two guys had carried the 5 boxes into the living room and put them together. 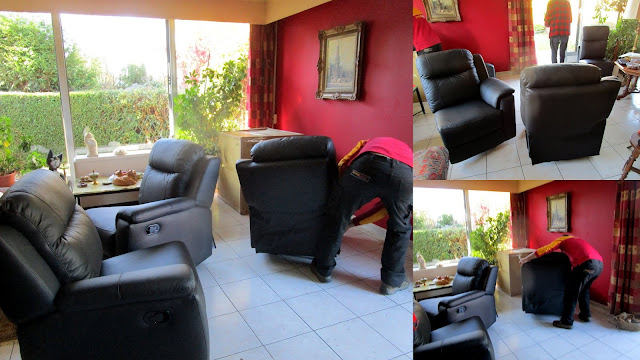 I was very happy, the leather was soft and everything seemed OK 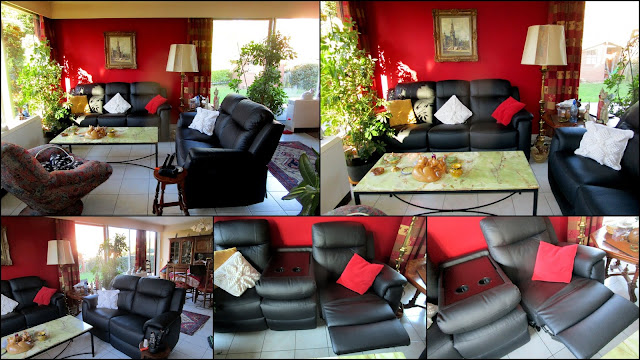 and so it looks finished. You have 3 recliners and one seat in the middle of the three seats you can use as a table. My fear that the cats would love the leather was unfounded because, they just sniffed a bit and that was it. Of course now, while I am typing both have chosen one sofa ! As long as they behave I have nothing against it. And Mr. G. is allowed to splash his coffee around now. It's easy to clean !

In the afternoon I will take the bus to Amsterdam to celebrate Toby's 8th birthday ! Time goes so fast ! 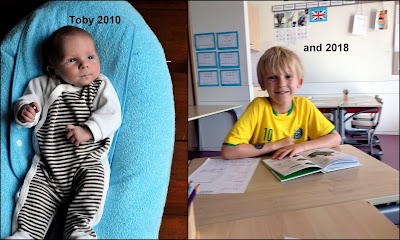 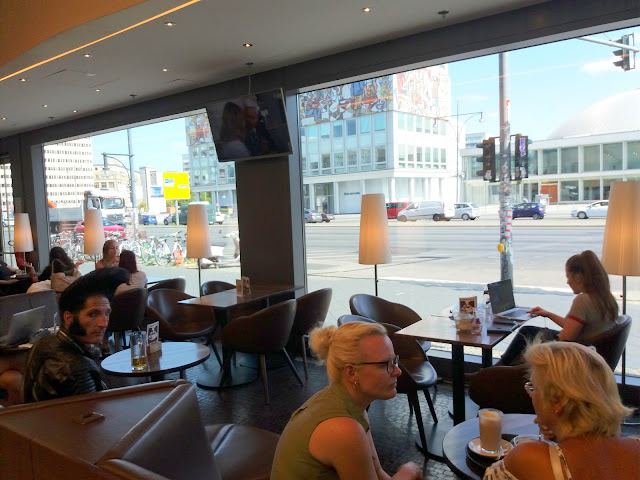 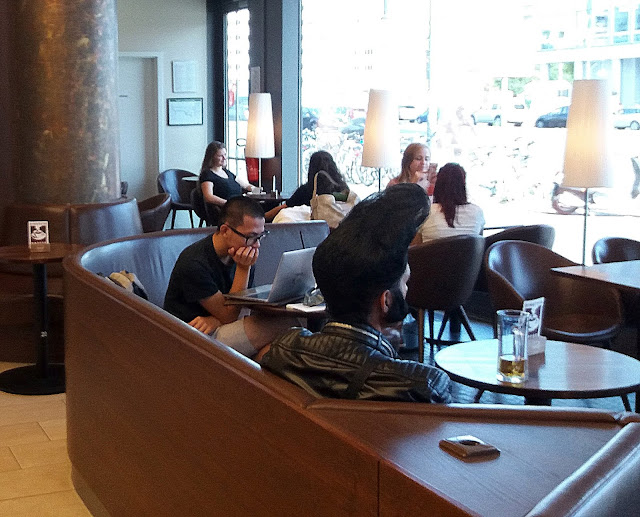 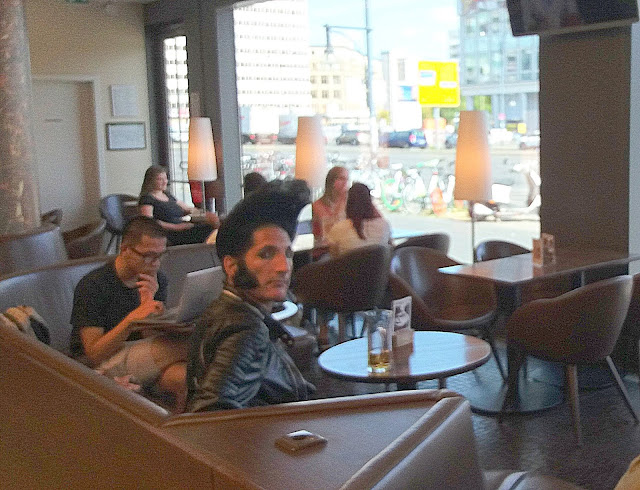 "I am the most beautiful" (seen in a Café in Berlin)

more participants here
and Image-in-ing
Posted by Gattina at 03:26 10 comments:

Coming from Poznan we arrived in Berlin late afternoon. Before checking in our hotel we made a tour through Berlin with our bus, to give us an overview of the city.

During World War II, large parts of Berlin were destroyed in the 1943–45 air raids and during the Battle of Berlin. The Allies dropped 67,607 tons of bombs on the city, destroying 6,427 acres of the built up area. But I want to focus on Berlin of today. The history of Berlin you can read in Wikipedia. 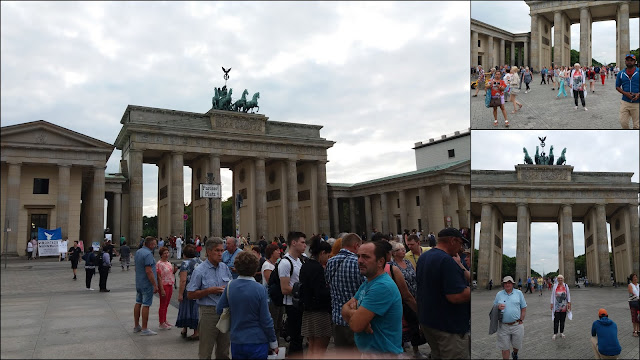 While during the whole week, the sun was shining on Saturday when I opened the shutters, it rained and it was quite stormy ! The rain pelted against the window, and I thought today I will do like my cats 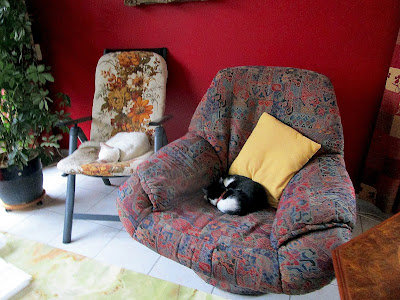 just laying around and doing nothing !

But after my first cup of coffee I thought that this plan would be a lost day and as Ilona was in the same situation, she asked me to come over for a cup of tea. Now Ilona doesn't live in Waterloo, but around 15 km from here, very easy a nice big road always straight and usually it takes me 20 min to get there.

As usual I took the Chaussee, and about 2 km from her home, the Chaussee was closed because of works ! There was no way to get to her house. I turned and found myself on this beautiful road with colored trees. Before Madame GPS told me to perform a U turn, I stopped and took this picture; 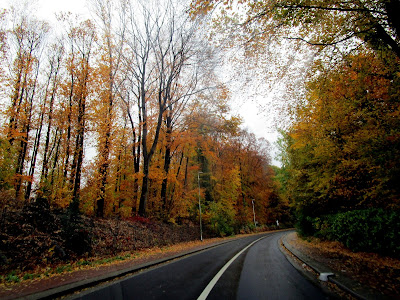 As it was useless to perform a U-turn I continued and she bravely directed me towards Ilona's address. 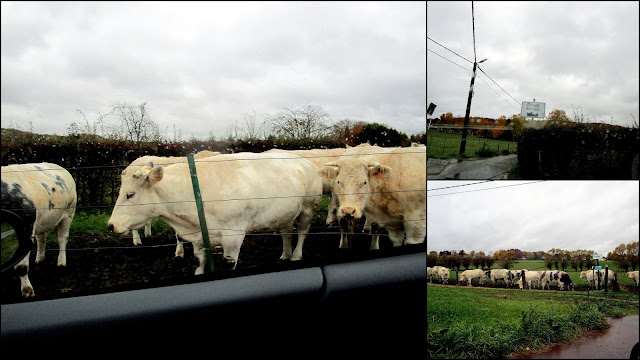 Only suddenly I found myself on a very small street for only one car in the middle of the country side. I was angry with my Madame, but then realized that as usual when she says to turn right I had turned left !  Instead of a lot of cars and their drivers I had cows starring into my car. They all arrived they probably thought I would bring them some food.

After a few turn left, turn right, perform a U-turn I finally arrived at Ilona's half an hour later ! Not so bad. She laughed her head off when I told her my adventure. Fortunately my car didn't get stuck at the cow field ! 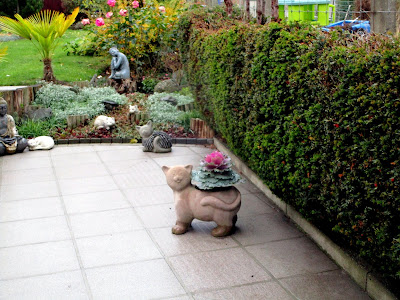 She had prepared her little garden for the winter and I found this blooming cabbage in the cat so cute. 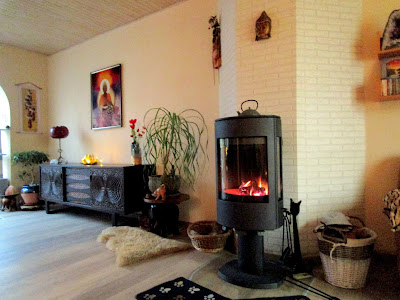 She had lit a fire and we had our tea and a very nice afternoon.

On Sunday it was even worse ! Fortunately we were invited  by Monique who wanted to celebrate her grandson's victory over three surgeries, he had an appendix surgery with quite some complications. 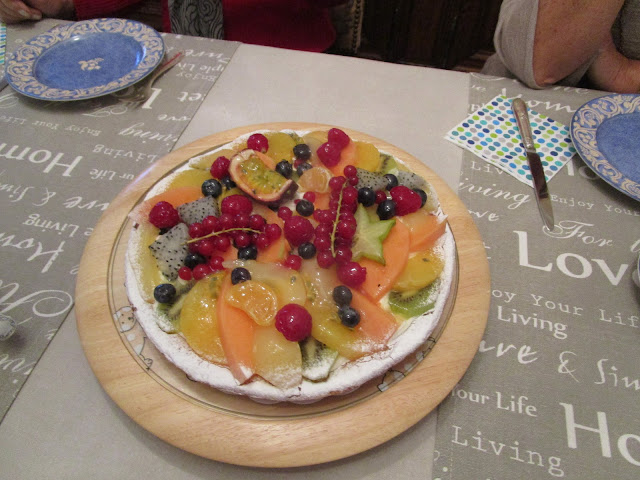 We had this beautiful cake, which tasted delicious 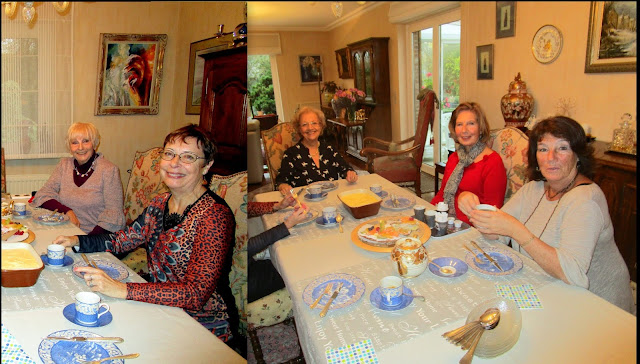 and after that a bottle of champagne and chatted the whole afternoon not about men ... but about our pets !!

Time flies by in good company !