IRELAND HOLIDAYS DAY ONE AND TWO

On Saturday morning I got up surprisingly rather fresh and Mr. G. drove me to the airport. Despite the fact that it was so early there were a lot of people underway and there already was a little traffic jam because of works on the road. The check in went quiet smoothly, we had our pictures taken again but this time I made a big smile because I knew when I put my passport on the scan the picture would be taken. The flight was on time the only hic was that I was sitting in the middle besides a girl who slept during the whole flight and a middle aged man who smelled very badly out of his mouth and I nearly fainted when he yawned. I couldn't even offer him some mint sweets because I had none. But I survived and didn't suffocate.

I arrived in Dublin at time and asked for the Aerbus which should take me to the Hotel. The information was wrong and after erring around for half an hour and my arm nearly dropped off because of pulling my suitcase, I finally took a taxi before I died. It was quite a long ride, far longer than it looked on the map, and that was because there was a highway and you couldn't jump over it but make a tour around. 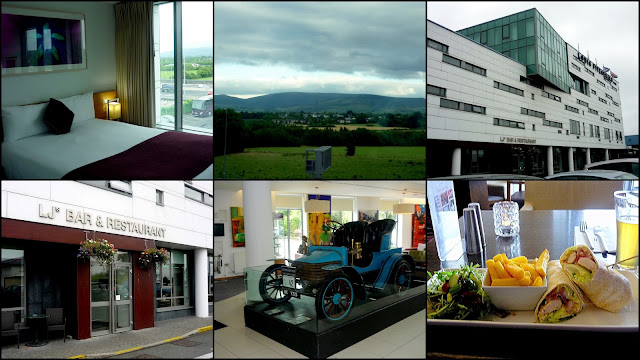 My hotel turned out to be very nice and the view out of my window was it too. Nothing to complain. I rested for a while and then I had some tea with a scone. The people are all very friendly and when I had my supper, very well served, I chatted a bit with a lady who had a terrible Irish accent and I hardly could understand what she said.  I was so tired that at 8 pm (for me it was 9 pm) I went to bed and watched a movie on my computer, there was nothing on TV. I fell asleep, so I switched off everything and slept 12 h ! Probably all the stress from the last weeks came out and I felt on holidays. 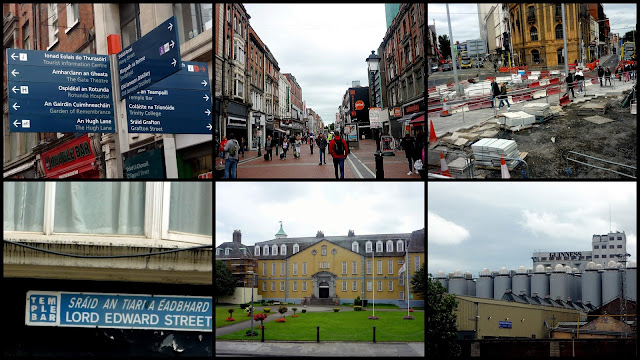 After breakfast I wanted to go to Dublin and make a sightseeing tour, which I always do when I don't know a city and want to see the most important things. The hotel is quiet outside of Dublin and I was told to walk for 10 min (which was already a lot but in reality it was 20 !) to the tram station. Because Dublin has trams. I behaved very stupid because I didn't know how to take the ticket out of the machine, although we have the same system in Brussels, but I am always by car ! A young man helped me explained on which side I have to go because in Ireland too they drive on the "wrong" side and nearly put me in the tram. After 15 stops I finally was in the Dublin city center and another young man indicated me the way to the Tourist office. I don't know why in Dublin young man help me while in other countries they are always elderly women or men. Maybe I looked especially lost.

The tour was interesting I was a bit disappointed I thought it would be a little more old, but here too they play "little Dubai" destroy old buildings and replace them with glass boxes. A part of the city was dominated by Guiness, it was huge ! I don't remember the amount of liters which are produced here daily but it was enormous. That's why probably we also saw two beer corpses laying across the sidewalk.

After the sightseeing I walked a bit through the main shopping streets where no cars are allowed, but didn't find anything special.. When a few drops started to fall from heaven I tried to find the tram stop back, which of course was on the other side now, but where ? Apparently I looked so lost that another young man remembered his grandma took me under his wings and showed me where the stop was, and also bought my ticked (but I paid it of course) when I arrived safe and sound at the Red Cow stop (what a name) I walked my 20 min back to the hotel where a group had arrived and the hotel looked full. Tomorrow I will join my travel group in another hotel guess the name ..... The Red Cow ! 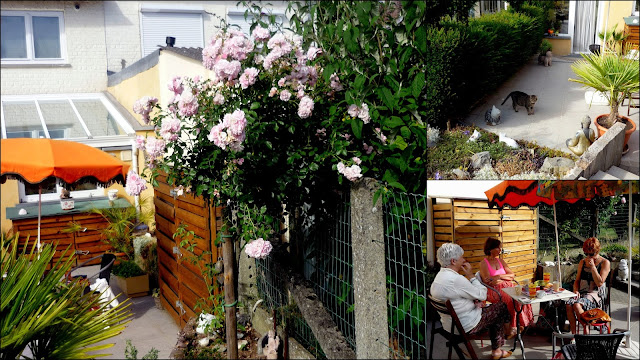 We started the week with our Scrabble group, this time we went to Ilona. The weather cleared up and it became warm so we could sit outside and enjoyed her garden.

2. I helped Ilona to bring cartons and clothes to the charity shop in favour of battered women. Slowly her mother's apartment is nearly cleared out, she had so many clothes ! Like a film star, being so coquet at 93 is wonderful ! For the furniture somebody will come and take everything, the children and grandchildren didn't want any, antiques are not in fashion at all in the younger generation.

3. I did my last shopping for things I need for my trip to Ireland. It rained and the nature was happy, all flowers, plants and grass needed water badly.

4. We also had our last painting class with coffee and a cake and decided that we will continue to continue to paint without teacher during the holidays if the room is free. Otherwise 2 months is a long time. And then we love to be together. After the painting course 4 of us went to a restaurant, where the first mussels had arrived. We all had our mussels with chips the traditional Belgian plate. It was really delicious. The mussels were quite small this year but very tasteful.

5. When you are reading this I am on my way to Ireland. I have never been there so it will be quite an experience. The worst is the luggage as with Ryan air I am limited to 15 kgs in total, and I have to take warm and cool things with me as the weather is not stable at all ! I always hope that the weatherman is wrong. Here is a picture of the tour I will do. 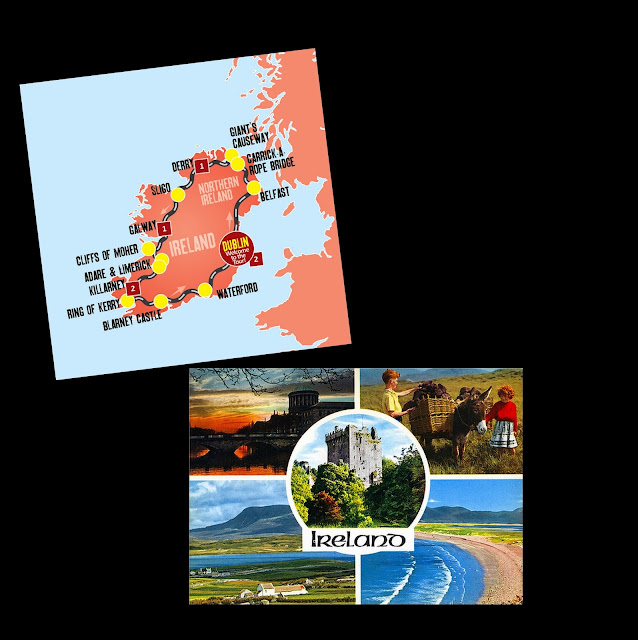 I will post whenever I can, I take my little travel computer with me as always and will do a diary ! 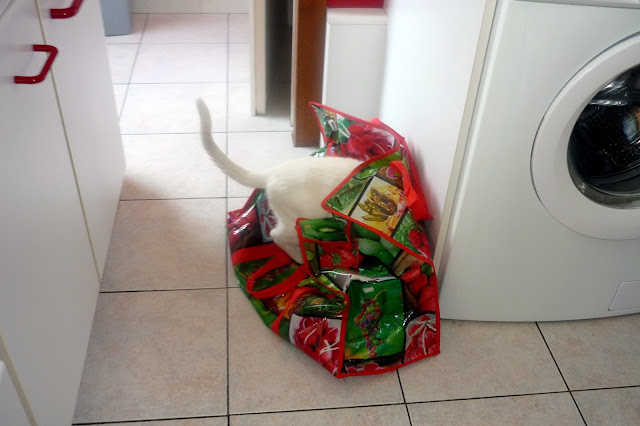 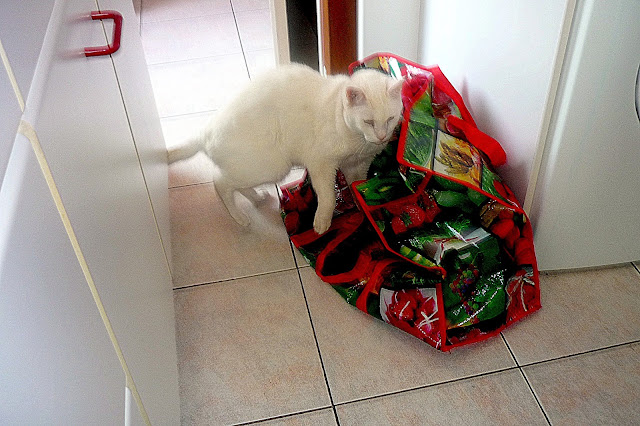 Nothing special for Our World in my world, but a very nice Scrabble afternoon. It was quite a while we hadn't scrabbled together, because two were on holidays, Ilona was occupied with the passing away of her mother and I hardly could play alone and my cats refused.

This time it was Ilona's turn and as the forecasted rain turned into a wonderful warm and sunny weather Ilona had installed the scrabble table on her patio and sitting under two umbrellas it was real nice. 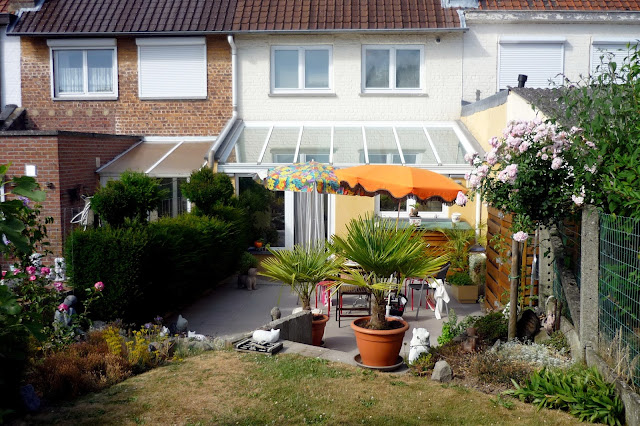 Her house had been a council house before WW II and ever since people had bought and transformed them into very nice little houses. With the palm trees and the yellow lawn because of the dry weather we almost thought to be in the South of France. 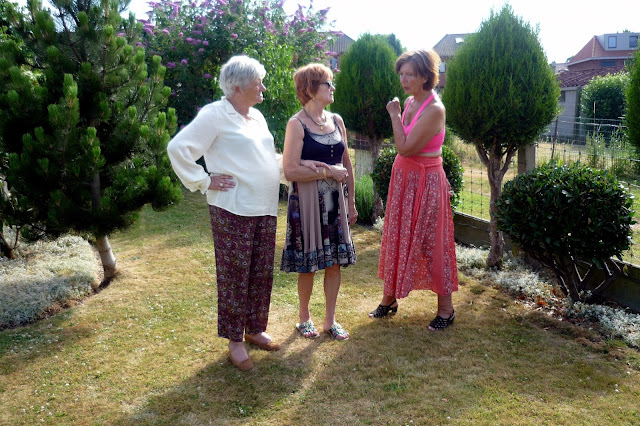 my scrabble girls,  Mireille who is half blind because of this awful eye decease "Macula", but nontheless always wins, Ilona and Nicole 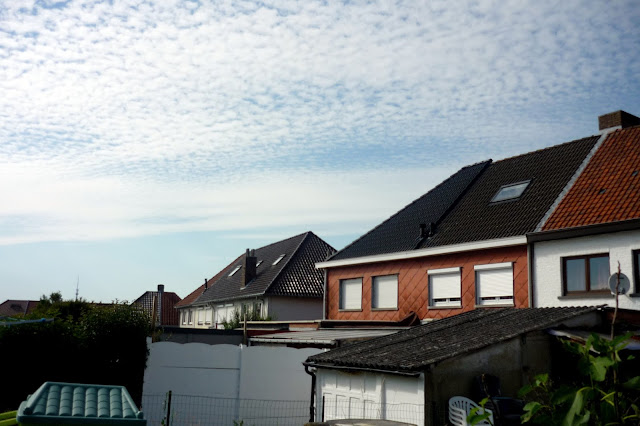 The sky was full of fluffy little sheep 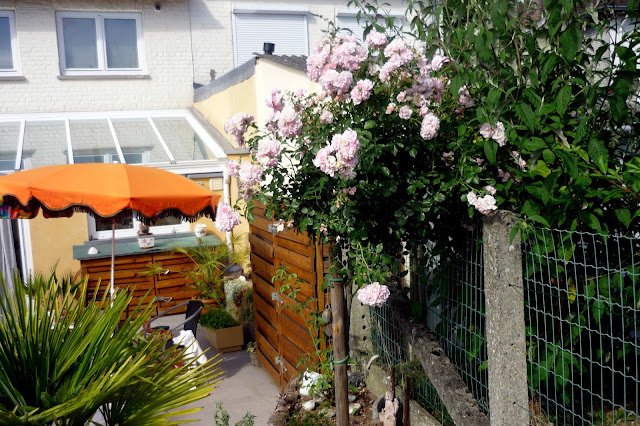 Ilona loves gardening and she has beautiful plants everywhere 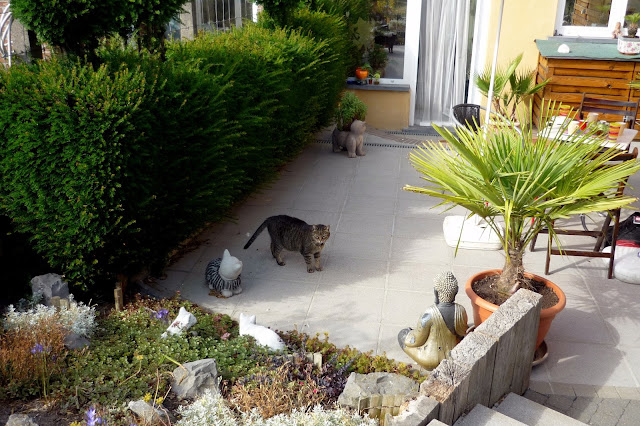 Resie the cat kept us company 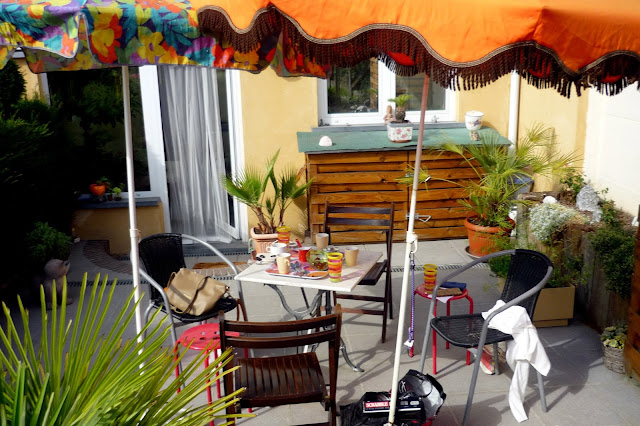 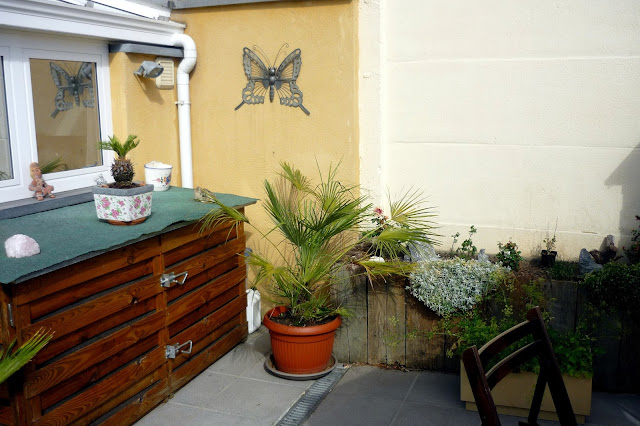 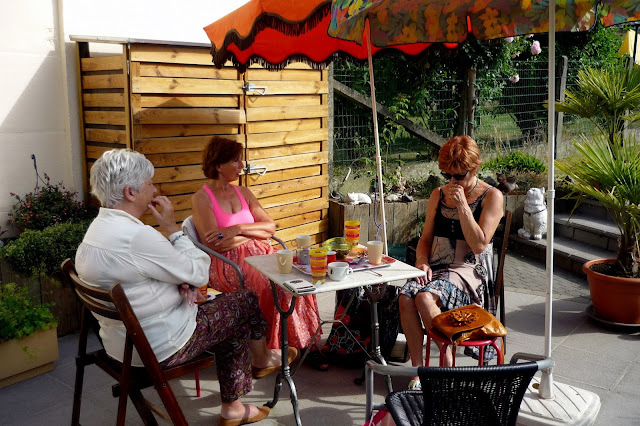 Scrabble finished we had a cup of coffee and a long chat.


Linking to Our world here
Posted by Gattina at 09:33 6 comments:

From 35°C on Friday, only 18°C were left and it seemed winter ! I just had got used to the hot temperatures and now it's "cold" again. The worst was that it didn't even rain and our grass is not green anymore but yellow. The good thing is you don't have to mow the lawn !

We had a little visitor, our grandson together with his Dad. They came to celebrate the birthday of my son's best friend son who will turn 7, Toby will be 7 in November.

They didn't stay with us, as the two little boys wanted to spend as much time together as possible and of course sleeping (??) together. But they came in the afternoon and stayed for supper. 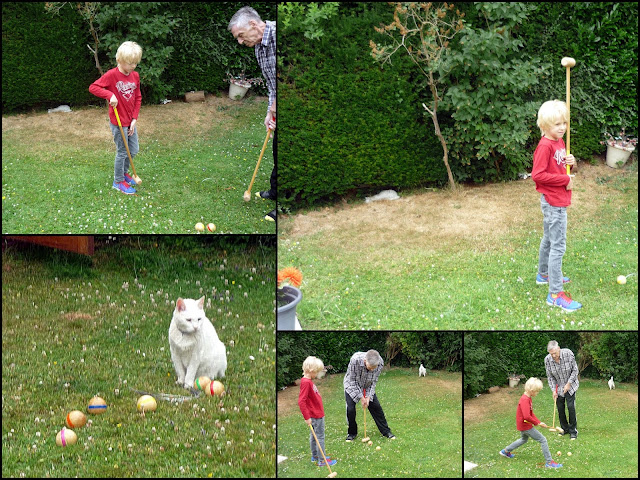 Mr. G. pulled his old bones together and played crocket with Toby 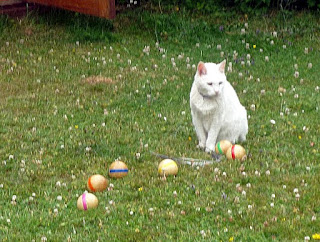 Toby is a fan of Lego's horrible monsters and loves to put them together. So to keep him busy I bought a very difficult one (that's what I thought) for children from 8 to 14. 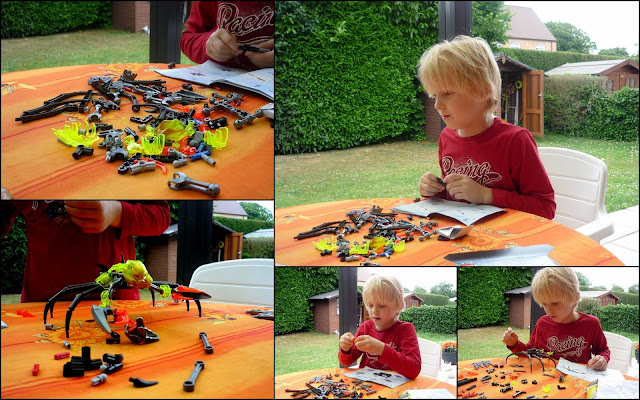 When I saw all the pieces laying on the table I thought he will never be able to put that together, but I was wrong in not even half an hour it was done and the monster looking like a spider was ready to play with. 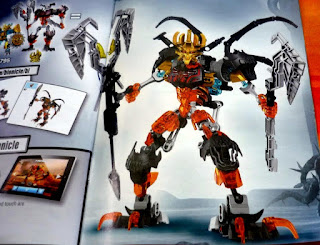 and for the next time he choose already this one, when I think that Mr. G. played with wooden trains and was afraid of monsters at this age, now they love it !

Sunday we only saw them for a short time, the whole day Toby had celebrated the birthday of his friend and they only stopped to say good bye. 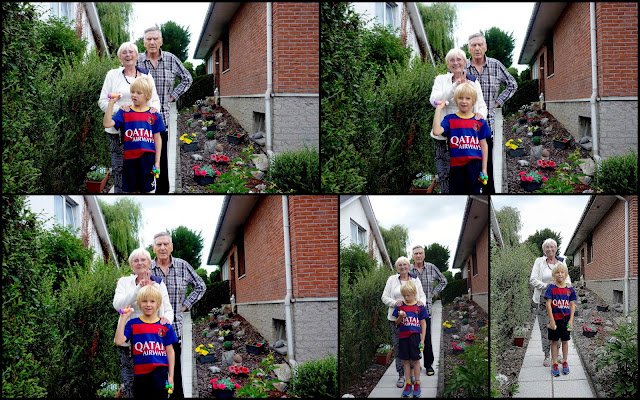 Our son made these family pictures 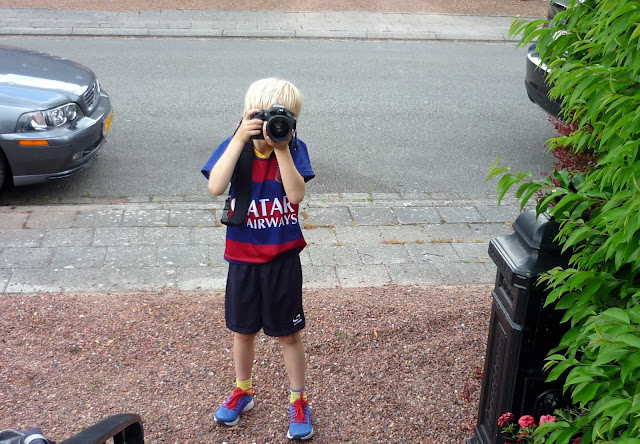 and Toby wanted to try too !