A Belgian citizen was so angry about the increasing petrol and electricity prices that he payed his electricity bill of 931.00 EUR (1,475.55 USD) in 1 cent coins which represented a weight of 215 kg (474 lbs) ! He carried them to the Electricity company in two barrows together with a friend.

This way he wanted to show the difficulties that citizens have to pay their electricity bill !

unfortunately no better photo available of the barrows
Posted by Gattina at 05:26 9 comments:


Today I will give you a little glimpse of all the good things you could eat in the Garda Lake region. As a part of Northern Italy belonged to Austria, there are still many austrian specialities especially bacon which is called "Speck" (the german word). 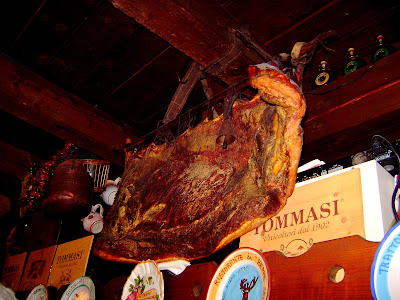 This big piece of "Speck" was hanging on a restaurant's ceiling 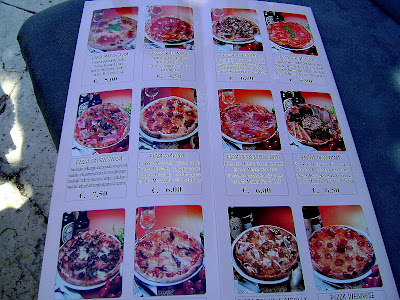 Pizzas with all kind of ingredients and for all tastes 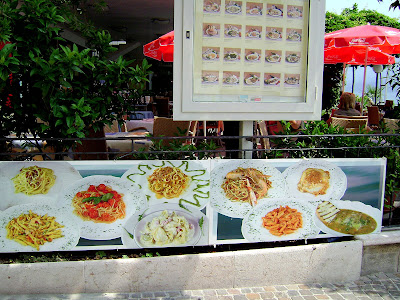 Pasta in all sizes, shapes and variations and all prepared in a different way. It is impossible to name all the plates you can eat. I loved very much pasta with seafood, or alla carbonara (with speck, eggs and parmesan cheese) or simply just with olive oil, fresh basil, garlic and parmesan cheese. 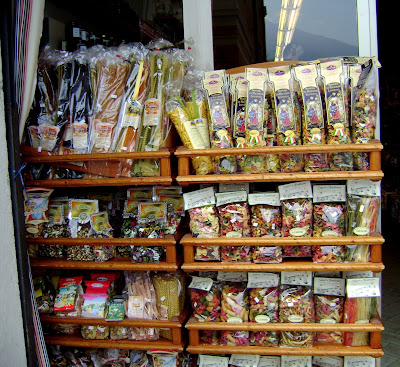 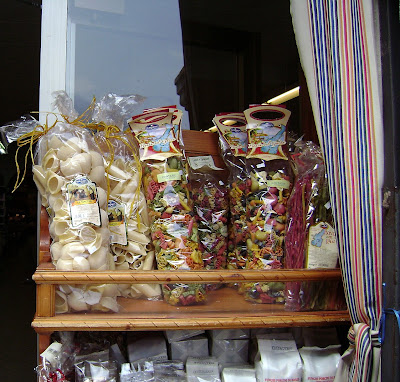 If you make the pictures bigger you can see all the different kinds of pasta which are sold and this is only a small part of all what exists ! 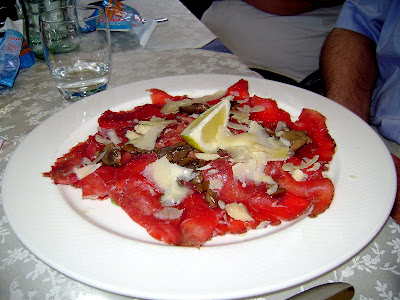 A very good starter is "Carpaccio". These are paper thin raw slices of beef, prepared with lemon juice and on top thin slices of parmesan cheese. You can also put basil on top. 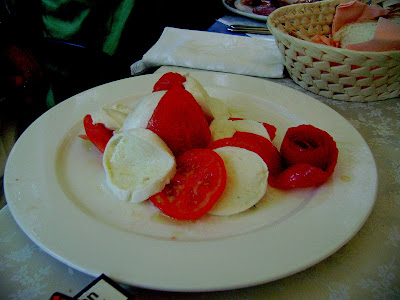 and of course the well known mozarella with tomatos 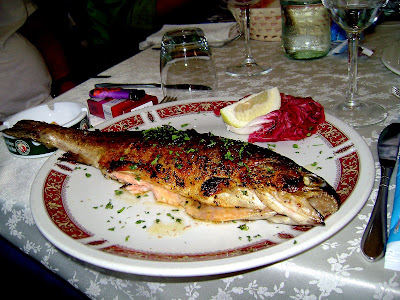 There are many trout breedings around the lake and in the mountains. It is an ideal place to eat a very fresh trout just coming out of the water. This is the one I had for my birthday. It was grilled and served with baked slices of zucchinis and fresh little potatoes. 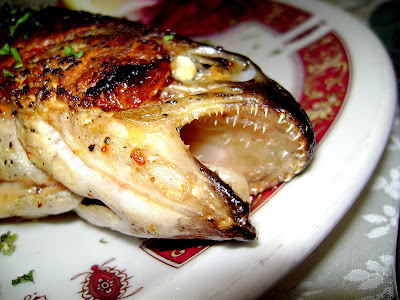 she didn't have a very friendly smile ! 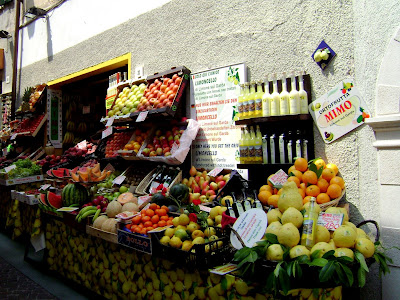 There were a lot of fruits around but very, very expensive ! We couldn't believe it. Italy had always been so cheap for fruits and now it's the same or even higher price then in Belgium./ 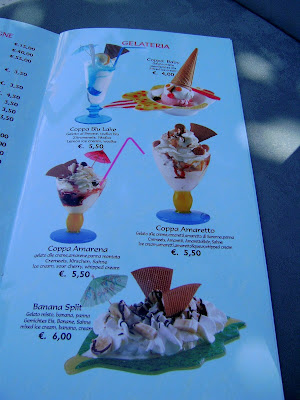 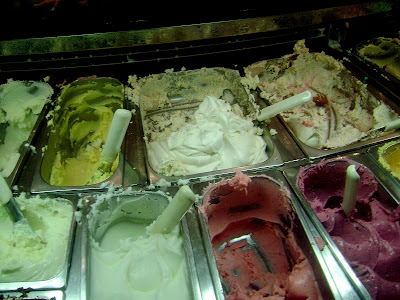 There is such a variety of ice creams it is unbelievable. I think it's the country with the best ice creams ! 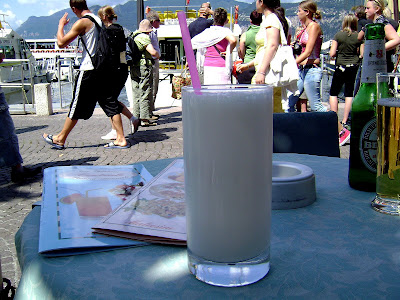 My favourite drink was called "frappé al Limone" which was an ice cold drink made with lemon ice cream, crushed ice cubes and milk. Although I don't like milk at all, it tasted very good and was really very refreshing.

Now don't think that I put on weight, even though I ate like a horse, everything was so good, but if you eat exactly the Italian way then it is very healthy and you don't get fat. I haven't seen a lot of Italians with overweight.
Posted by Gattina at 05:30 14 comments:

1. Angelina Jolie and Brad Pitt: Twins Vivienne Marcheline and Knox Leon, sold for $11 million to a US magazine

2. Angelina Jolie and Brad Pitt: First child Shiloh Nouvel born in Namibia in 2006, sold for between $5-7 million to People magazine

3. Jennifer Lopez and Marc Antony: Twins Emme and Max born in 2008, sold for $6 million to People

4. Matthew McConaughey and Camila Alves: Levi, reportedly sold for $3 million to OK!, according to TMZ.com

7. Christina Aguilera and Jordan Bratman: Max, sold for a reported $1.5 million to People in February

10. Nicole Richie and Joel Madden: Harlow Winter, sold for a reported $1 million to People in February

13. And three high-profile celebrities who didn't:

* Nicole Kidman and Keith Urban, for Sunday Rose, because they said they did not feel that it was right

* Sarah Jessica Parker and Matthew Broderick, for James Wilke. The actress stood outside the hospital with her baby and posed for free.

* Tom Cruise and Katie Holmes, for Suri Cruise. The couple reportedly took the pictures off the market after a bidding war. Pictures taken by Annie Leibovitz ran in Vanity Fair.

and I did not either not even on Ebay ! Because 35 years ago it didn't exist. 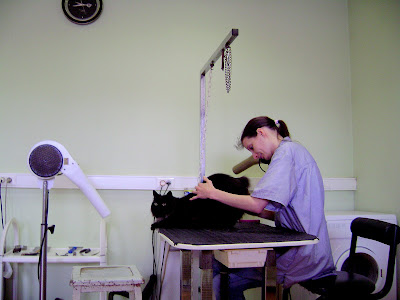 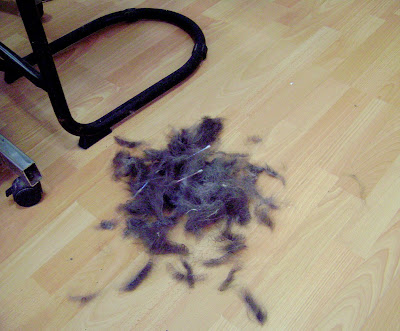 My extremely shy cat Kim behaves like a spoiled lady in a beauty saloon ! It was her very first time !


The bloomers will be auctioned on 30 July in Mackworth
A pair of bloomers that apparently belonged to Queen Victoria are to be auctioned off in Derby.
The knickers have a 50in (127cm) waist and date from the 1890s, which indicates the monarch had a large girth as she approached her 70s. Hanson's Auctioneers are selling the bloomers on 30 July and expect them to fetch at least £500. I wonder how her chair looked like ? and her throhn must have had XXXL size !

M&S defends 'tax on bigger bras'
Marks & Spencer has defended a policy of charging extra on some of its bras that are bigger than a size DD. The retailer said that the added cost - typically £2 - was "standard industry practice".
M&S added it found most customers "were happy to pay a small premium for the specialist work" needed to make larger sizes of their bras. I don't feel concerned, but looking at the pants above, Victoria would have had to pay a double tax !

Jolie doctor was nervous at birth
Angelina Jolie and Brad Pitt's doctor has admitted he felt added pressure delivering the couple's twin babies because of their fame. Oscar-winning actress Jolie gave birth to son Knox Leon and daughter Vivienne Marcheline by Caesarean section in France on Saturday.
When asked on Europe 1 radio whether he was nervous beforehand, Dr Michel Sussmann said, "for sure". He added: "It's true that there was pressure due to the couple's fame. Poor man ! of course to work on (or in) a famous womb is different than the one of Mrs. Smith !

Feminists in France put beards on statues
Female activists of a group called "La Barbe" (the beard) put colored beards on the three statues on the place de la République in Paris. Their spokesman said that they would come back each year until France has a female president. I think about buying some beards and do the same here !

CAMILLA went to war yesterday, donning a combat jacket to inspect her troops.

The Duchess of Cornwall, Royal Colonel to 4th Battalion The Rifles, met soldiers and families at their barracks in Bulford, Wilts. She also gave out bravery and other awards. Oh my God she is without hat !! She must feel quite naked !

An eyeful ... Prince Charles
Prince Charles had a tougher assignment.
He had to watch as PC Naomi Rothwell-Smith had physio on a back injury at the Police Rehab Centre near Oxford. The part-time model, 27, from Warwickshire, said: “He was a bit like my dad.” Even without daughterly feelings I would refuse this kind offer !
Posted by Gattina at 06:44 7 comments:

For photo memes see above !

Dungarees Ablaze said : for your assignment lets hear about your favorite “Birthday”, it needn’t be your actual birthday just a "birthday" celebration. You can use one you planned, one you attended, one you crashed, just a fun time for this FUN MONDAY’S assignment, and of course you can use one of your very on Birthdays.

I don't remember any of my birthdays as a special event not even as a child. We celebrated of course and I got gifts but then I have a complete black out. The only one I remember clearly was my 65th birthday last week here and here and my "round birthdays"
As I have my birthday in July either we were on holidays or everybody was on holidays and I celebrated just with the three of us.

On my 30th birthday I was pregnant until under my chin and it was very hot. I remember I got a glass of Champagne and after that the baby played football in my belly.

My 40th birthday we celebrated at the Belgian coast with friends and apparently a lot of Champagne because the little friend of my son counted the bottles and asked me the price then he calculated the amount we had spent ! I will always remember that it had been 12 bottles but don't remember how many people we were. He was then 10 years old and became an auditor in a big swiss bank where he still works today and makes a lot of money ! I wonder if he became that because of my birthday !

The 50th I celebrated in the Sequoia park under the largest Giant Sequoia tree, General Sherman, (volume 1,487 cubic metres (52,510 cubic feet), the world's largest known tree). I ate an hamburger under the tree because I was hungry. I don't remember if it was a big or a small one !

Of my 60th I don't remember anything, I wasn't very well at that time. I think I had a glass or two or three or more of wine at the Waterloo Lion watching tourists. (shortly after I gave up drinking wine)

And now I have to wait for my 70th. Maybe I will spend it at the Northpole in an igloo or in Amazonia amongst an Indian tribe.

On our way back from Italy to Belgium we stopped in a cute little town shortly before Frankfurt in Germany.

The hotel we found dated from 16 hundred something and had been completely modernized but had kept its original features. 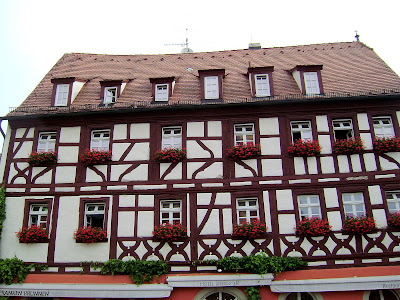 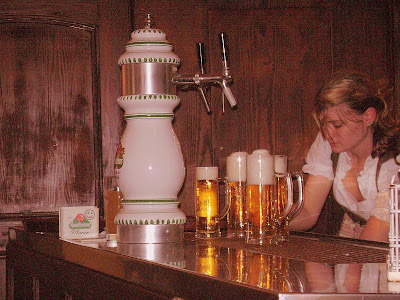 The young girl had a lot of work with serving the beer correctly, not too much foam ! 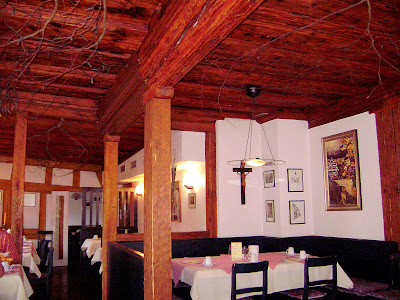 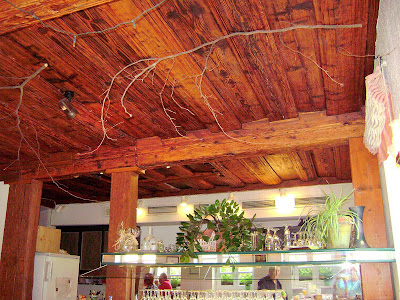 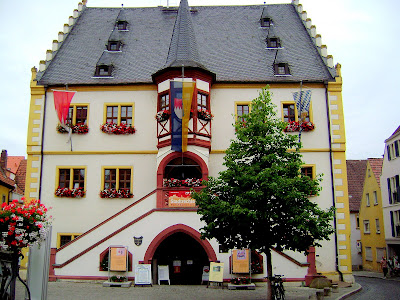 Just besides the hotel was the town hall 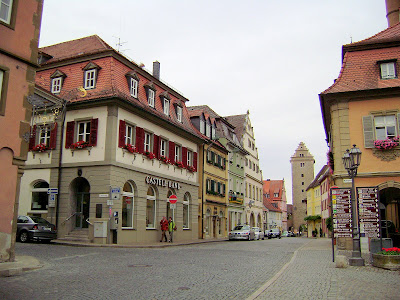 and the little streets were very quaint 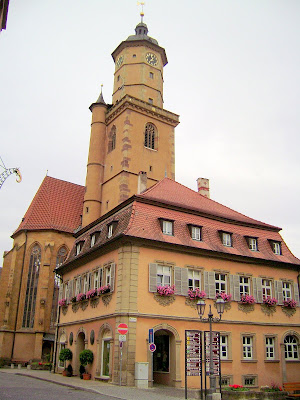 Unfortunately the church was just in front of our hotel because the bells rang every 15 min ! Bing bing, bing. That was OK but half an hour made already bing bing bing BANG and full hours BANG BANG BANG (immagine at 12 !!) I had to put my ear plugs on and wasn't happy at all with the Vatican ! 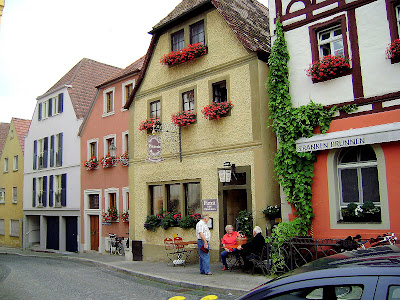 Even in such a little town there was a Pizzeria !
Posted by Gattina at 05:24 10 comments: