1. This week went by like all the others, and started with my aqua gym. 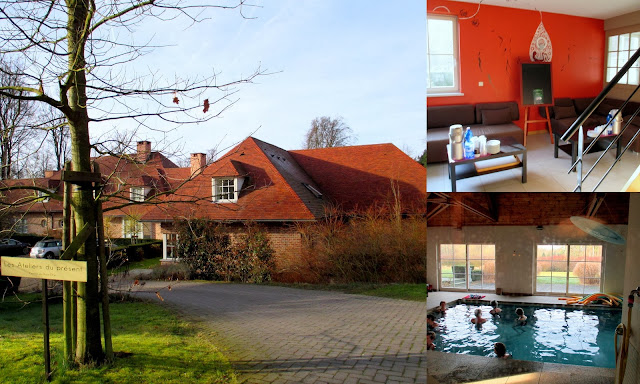 This time I arrived too early and took the opportunity to take some pictures as nobody was around yet. We were only 6, the others were on holidays before the carnival school holidays start, because then everything is more expensive. Those who had booked for ski holidays sat in the mountains without snow, or if there was snow it was so foggy that you couldn't see anything and the ski runs were closed. For the moment we have nice and sunny weather, but it is so windy that it is no pleasure to walk outside.

2. I spent the afternoon with Nicole and we could sit on her terrace which is wind protected and both purred in the sunshine. Unbelievable for February, last year we had snow at this time !

When it got too cold I helped her googeling for dog booties, as Charlie's wound on his paw has to be protected against humidity when he walks outside. 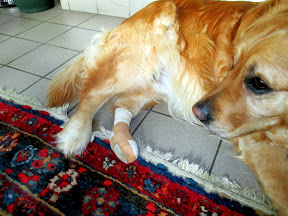 We found some nice once, but before ordering them Nicole first wanted to ask her vet.

3. It was an ideal weather for photo hunting, which I did, making a stock for my different photo themes,

Then I wanted to switch off my camera but I pushed on the wrong button and made some very creative pictures of  Ilona's feet, until I realized that something was wrong.

4. I never buy cut bread because the slices are too thin and I like to toast my bread and therefore need larger slices. So I cut the slices I need with a knife and noticed that it became sometimes a hard job. I thought about buying a bread cutter, but that takes a lot of space and finally a friend told me why didn't I buy an electric knife ? 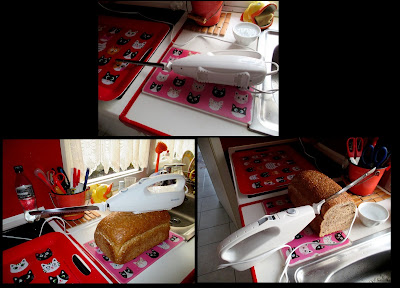 I thought it's an excellent idea, went off and bought one.

Now I don't need the forces of a lumberjack  but can cut my bread with elegance !

5. I have started a new painting in my painting class and while I painted with energy and temperament an abstract painting, I used the opportunity, not on purpose of course, to paint my neighbor's jeans and painting at the same time. Now she suggested that I should come with an umbrella to protect her from my spatters. We also had a lot of conversations, about Hashish smoking grandchildren, lazy husbands, back and hip problems, etc. It's always good to listen to other people's problems.

More participants here at A rural Journal.
Posted by Gattina at 06:30 21 comments:

WHY DO THEY WANT TO LOOK ODD ?

Usually I don't watch Talk Shows, but this time, zapping channels, I found a Talk Show on the French 2 channel which is called "Toute une histoire" "A whole history". What I saw made me watch the whole show ! Besides the Talk Show host, there also was a psychologist on stage.

Each day there is another theme and this day it was : "They refuse to be unnoticed" 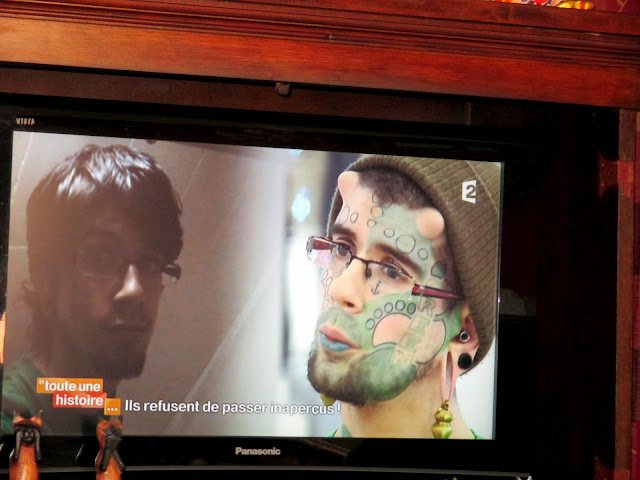 Indeed with this tattooed face you have to be blind not to notice this young man ! 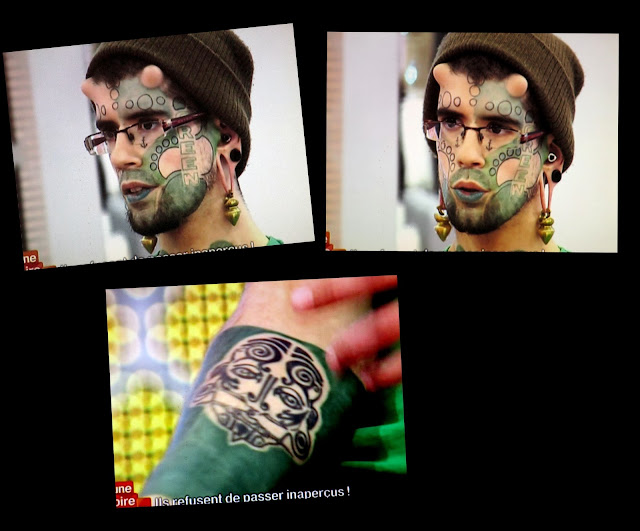 He was 28 years old, and had started to make his face and body a living art work. He had started when his mother died when he was 21. That's what he said. I found the artwork rather odd and wondered what kind of relationship he had with his mother. The psychologist wondered too.

He said that he feels now so good about himself and that his "artwork" is not yet finished. There is still room left for other tattoos. The horns were made through surgeries, he is now at his third silicon layer and wants to add 3 more. He thinks they are too short. I know men who also wear horns, but they are invisible, and sometimes have more then 6 layers ! I wonder if he will hang some Christmas balls on them when it's Christmas time.

To the question if he is accepted in society he answered that of course he has lost many friends and that people are staring at him wherever he goes, even the fact that some throw tomatoes at him didn't bother him at all. Only the fact that people notice him counts.

The psychologist tried to analyze his behavior but without any success. He was closed like an oyster and stubborn like a donkey. He said that he is normal and has no problems with his odd look. To the question how he thinks he would look like when he was in his 60th or 70th he pretended that he still would look good especially when his horns had grown bigger. Poor guy, what a dreamer. When he wakes up, if he ever does, what a catastrophe he could never get rid of all tattoos and deformations he had done to his face. The green underlip is not a lipstick but a tattoo, it will last green forever.

Strangely or just because,  he was very intelligent and studied science !! Of course he had no girlfriend (yet) as he said, I wonder if he ever will find a woman who wants to wake up besides a Frankenstein.

The second person in the show was a girl who hadn't found her identity yet ! She owned 60 wigs and transforms herself every day into another person, mostly by kids well known figures. 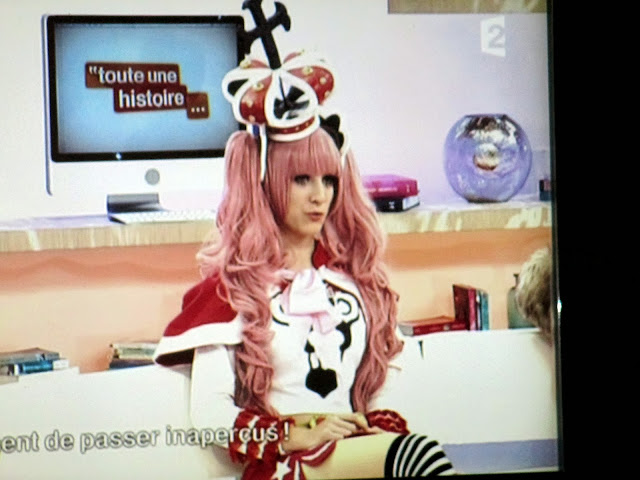 As I don't know  these figures I can't tell what she represents here. She has to dress each day into another person, otherwise she won't go out and hide her real face, nobody is allowed to see her without her costumes. The psychologist told her that she needed help and I agreed with her, without being a psychologist. 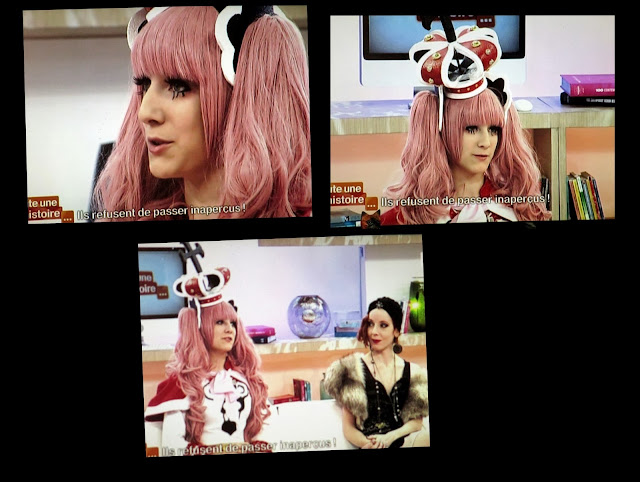 Unfortunately I missed the problems of the third person who was there, I think she must have problems with today's fashion and wants to look like a lady out of the 1930th !

When the show was over and I went shopping I saw some odd looking people but not that odd ! 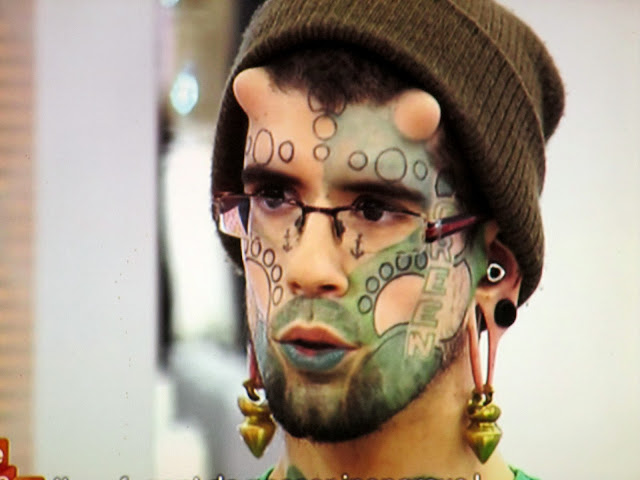 Photo taken from the TV screen.
Posted by Gattina at 06:30 7 comments:

When we came back from the Belgian coast (post below) it was dark and while chatting, of course I didn't pay attention and didn't listen to Mrs. GPS either. With the result that I took the wrong exit and suddenly we saw the Atomium, the  balls illuminated ! It was at the other end of Brussels, not where we had to go, but it was such a nice surprise ! I had never seen the Atomium by night ! 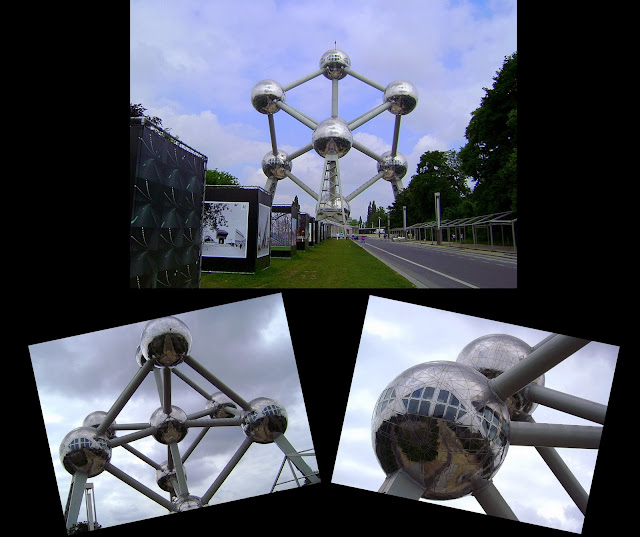 During the day it looks like this. In the balls are a bar, a restaurant and exhibitions. 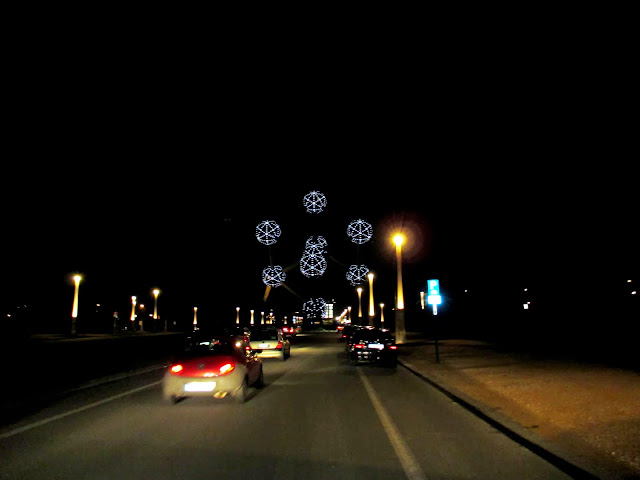 From far I saw it shining 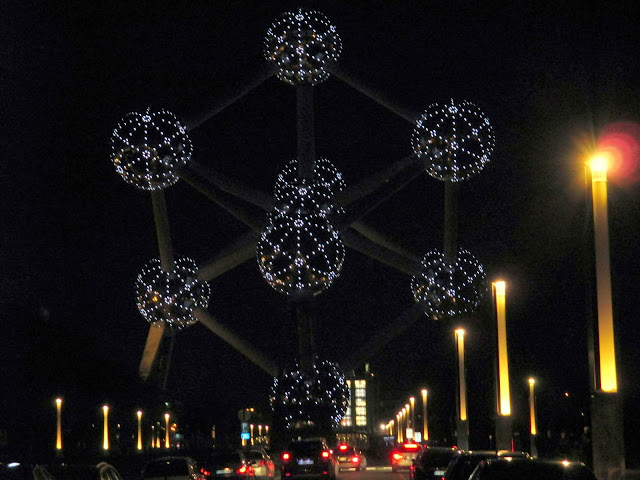 and of course stopped, got out of the car to take these pictures 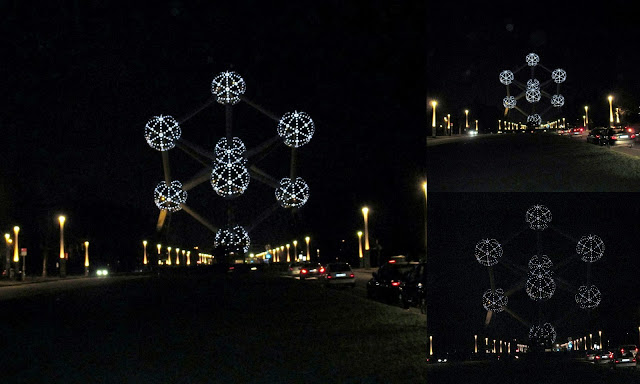 There were many people probably for the restaurant, because it is located in the upper ball and you have a beautiful view over Brussels.

MY WEEKEND OF FEBRUARY 22

In a sudden attack of cleaning our entrance, I took the opportunity to clean it before the attack disappeared. It was raining and then it stopped so I took a bucket with a lot of chlorid and a scrubber, threw the solution on the tiles from the letter box to our entrance, scrubbed the moss away and waited for the next shower to wash the chlorid away. Ever since it hasn't rained, and my entrance remains unfinished but looks almost clean. 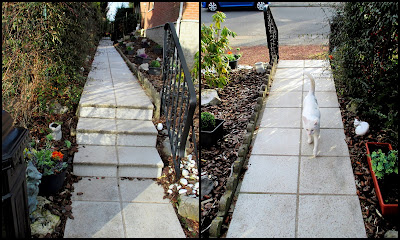 Arthur checked and found it satisfying.

As the weather forecast had announced sunshine at the Belgian coast, Ilona and I went to Ostende where Nicole owns a little flat.

We arrived just before noon had an aperitif together enjoying the wonderful view on the blue sky and the sea. Then we had chicken with rice and vegetables and went out for a walk. Although it was not cold at all, with the wind it felt cold and we were glad that we had warm clothes on.

Before going out, Nicole had to bandage Charlie's paw. He had a surgery and a claw had been taken out, leaving a quiet large hole and a deep wound. Inside she takes the bandage off so that the wound can dry, but for a walk he needed a bandage. 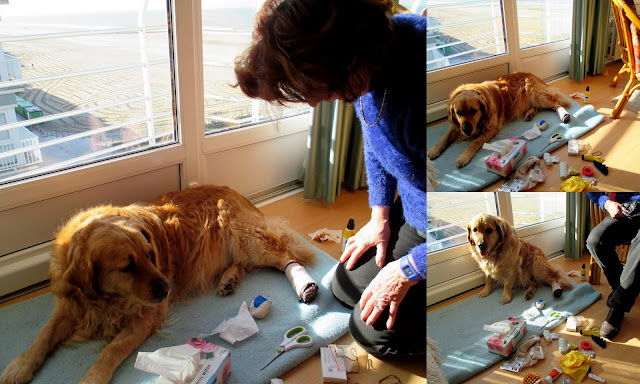 Nurse Nicole bandaged the paw and put a plastic around so that no water could get inside. We decided to order a little boot for Charlie, I had seen some on Internet. 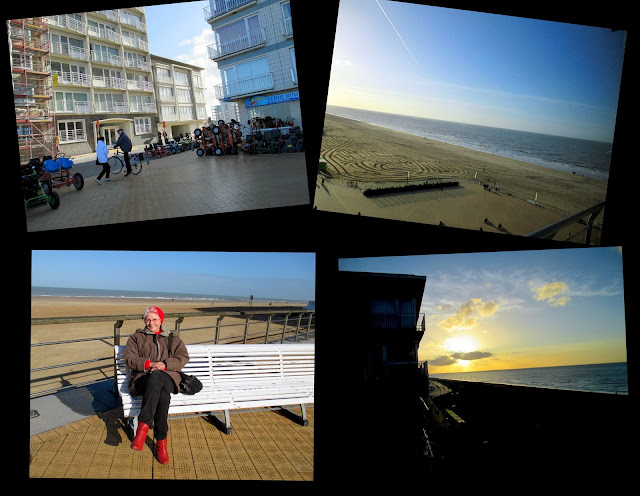 Then we walked along the beach, and sat down in the sunshine, taking a little sunbath. After that we had a nice cup of coffee with a Belgian wafel and whipped cream in a restaurant. The terrace was heated so we could sit outside.

When the sun went down we returned home. We had spent a real nice one day holiday.