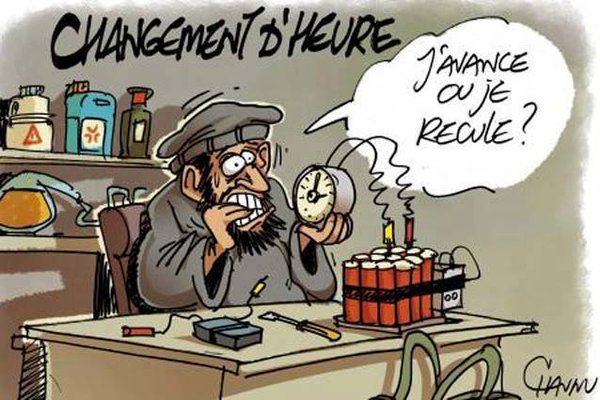 1. I still wasn't well enough to pull out trees, so I just went buying food, because my rice stock was empty we both had to pay attention with what we ate. I hate to feel so weak and dragged myself from computer to Television and back !

2. At least I could follow up my blog and as I had created a Facebook page for our painting group (Gibloux Couleurs) I was busy with all the photos I had taken, some of them had to be lightened up, some needed to be more dark or cropped and that took some time. Finally they were all ready to be put on the page.

3. I still didn't feel like going out and thought about a solution to put the exhibition pictures in an album on internet, for those who don't have a Facebook account. Before Google bought Picasa, there was no problem, I just made an album on Picasa and sent the link. Suddenly I remembered that there was also Flickr. To my big surprise I was already member, there were about 600 photos from me from 2007 til 2009 after that I must have switched to Picasa ! I even found the password !

It took me the whole afternoon to make that Album, because I had completely forgotten how to upload pictures from my computer to Flickr, lost 3 times all photos but finally managed I don't know how. For those who want to have a look on our Masterpieces they are here.

4. After one week exactly I finally felt normal again and I went with Nicole to the Carrefour "Lunch Garden" ! Her kitchen is now completely empty all the old furniture is gone and she heats up cooked meals in her micro wave or goes out for lunch ! It doesn't bother her. Next week the kitchen furniture will be delivered. It was very good and since now they do "Take Away" I ordered a plate for Mr. G. 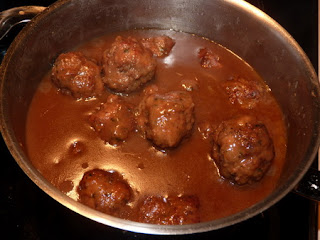 It was Liège meatballs in a delicious sauce made with Leffe beer and served with rice and spinaches. It was a huge portion. Mr. G. liked it so much that he gobbled it down like Charlie (the dog) ! After half an hour he got stomach pain, worse and worse and finally went to bed ! Men !! 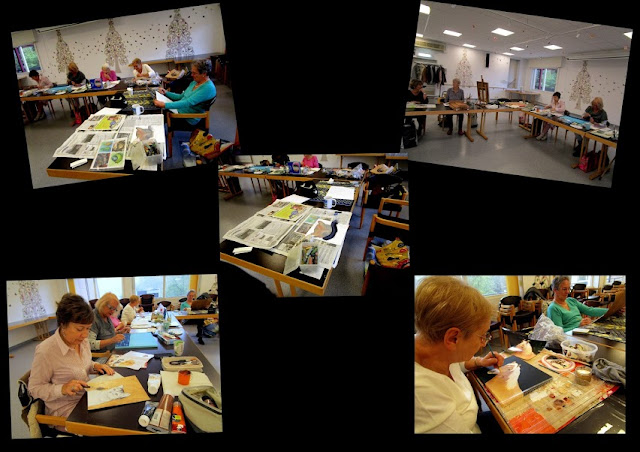 It was the first time after our Exhibition that we had our painting course. Our teacher and the administrator were both absent because they had also caught the gastritis ! So we "taught" each other and it was very amusing. Of course we had a lot to talk about the exhibition, who sold what etc. All in all everybody was very satisfied. 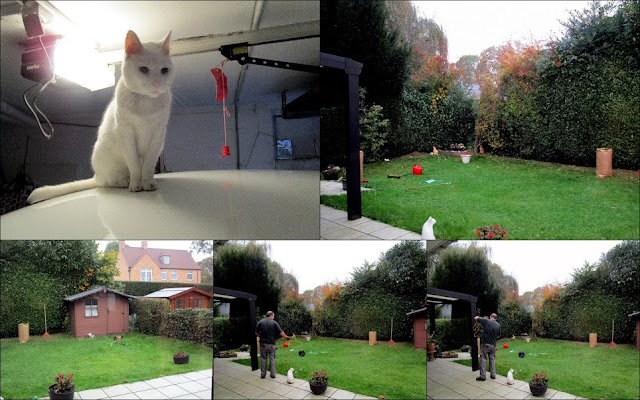 To prepare our garden for the winter I again needed somebody to help. I didn't feel at all like working in the garden, pull out the plants from the pots and cut the ivy which is invading our garden.
Thanks to Facebook "Vivre à Waterloo" I just asked as I had done in spring if somebody could do our garden and I had an immediate answer and a very sympathic man came punctually and made the whole garden in three hours including trimming a hedge ! Was I happy !

My cat Arthur sat on the roof of my car and controlled the whole work !

So now for this year this &@$# garden or yard or whatever is ready for the winter sleep. 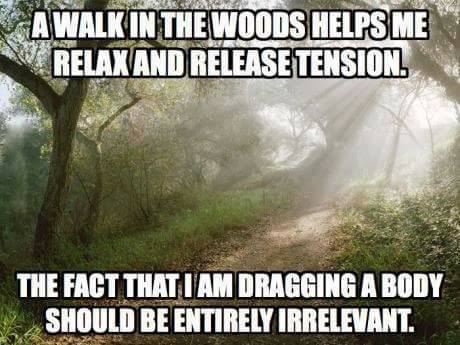 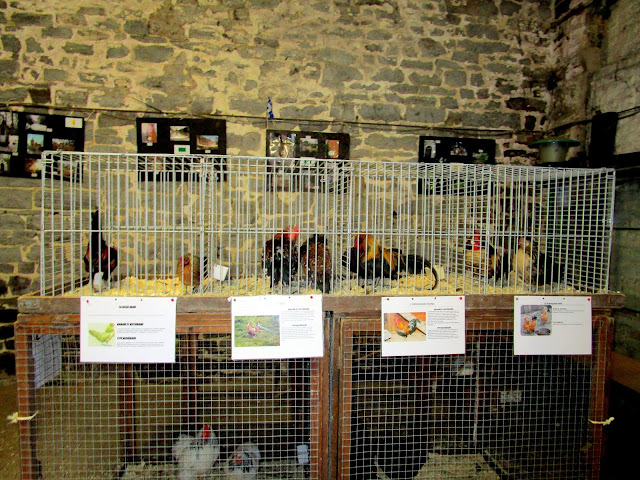 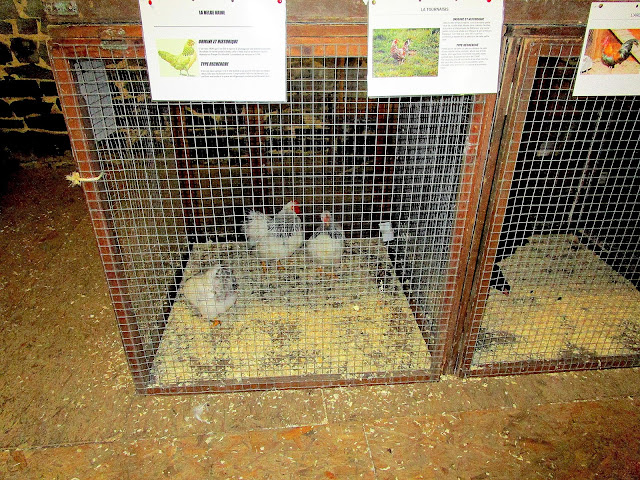 1. Besides your very own house, describe a place where you feel most 'at home'?
Besides my own home I have two others which I love equally. The one is the house of my friend in Eastbourne at the English South East coast and the other one is at the French Riviera with my friend Claudie and her family.

2. When did you last 'hit a home run' with something? Explain.
I don't really understand the expression "hit a home run", if it is to look for a new house, then it is at least 40 years ago !

3. Tell us about something you love in your house or kitchen that is 'homemade'.
My friends and family are probably lazy, but I have nothing "homemade" in my house or kitchen, except the paintings which I did myself.

4. 'A man's home is his castle'...which of the world's ten most captivating castles (according to The Travel Channel) would you most like to visit and why-

5. What's a recent or upcoming plan or project that's required you do a little homework before getting started? Did the homework cause you to abandon your plan or adjust it in some way?
The only plans I do since I am retired are travel plans, and that I haven't started yet because I am going to Egypt end November and after that I can do the next plan.

6. In your opinion, is homework an unnecessary evil or a valuable practice? Should schools be done with homework? Why or why not?
Honestly I don't care, I went through that myself and then with my son that was enough. But I think if you have to stay the whole day at school, there should be no homework anymore !

7. Share a favorite memory of your childhood hometown.
I always loved Christmas time in my home town in Germany when I was a child. Everything was so warm and cosy. I never had that feeling again since I live in Belgium even when I still lived with my parents.

8. Insert your own random thought here.
I wished the 26 of November would be already there and I could escape to the sunshine

From this side of the pond
Posted by Gattina at 07:00 3 comments:

AUTUMN WALK ALONG AN OLD ABBEY 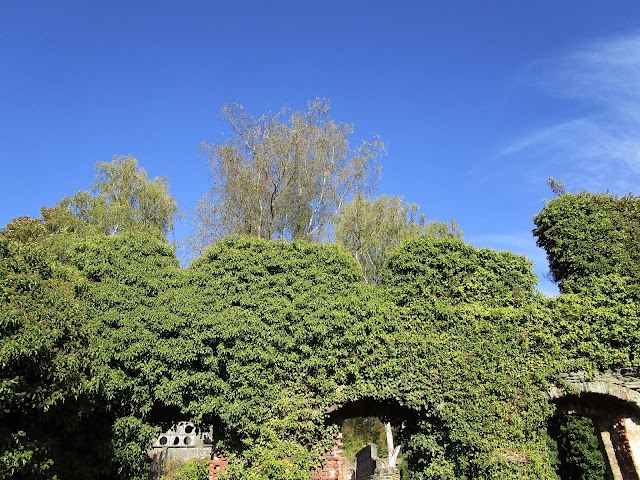 It is a very huge Abbey and the ruins have been restored. 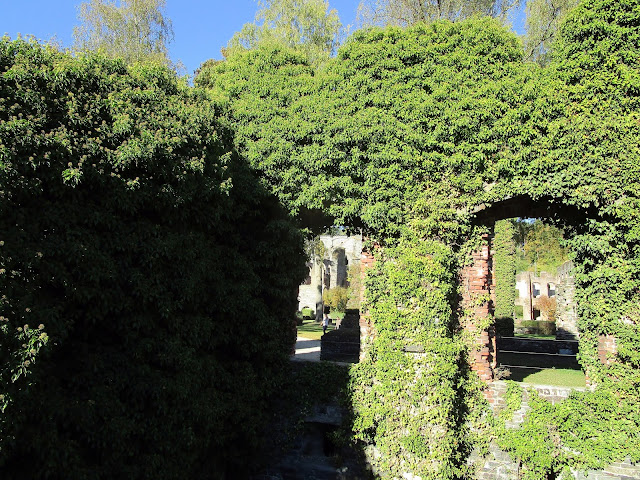 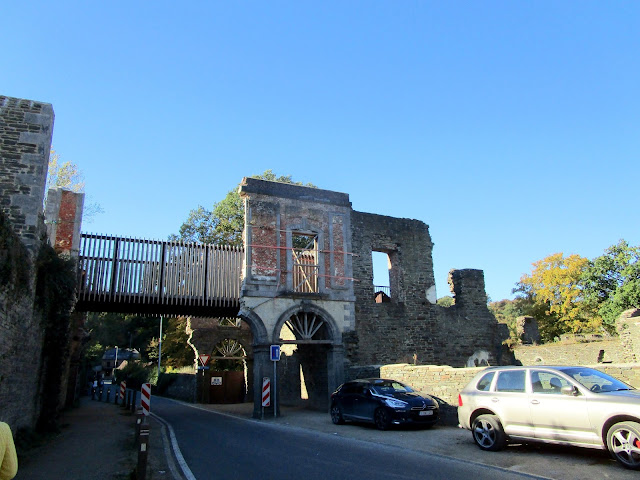 The entrance also had changed and after having asked 3 times, it was finally too late 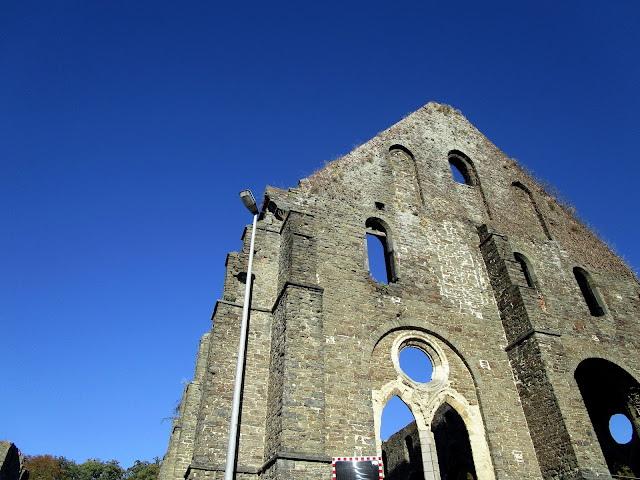 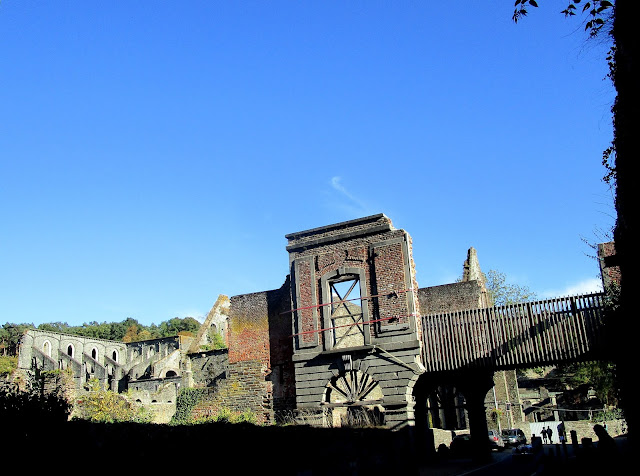 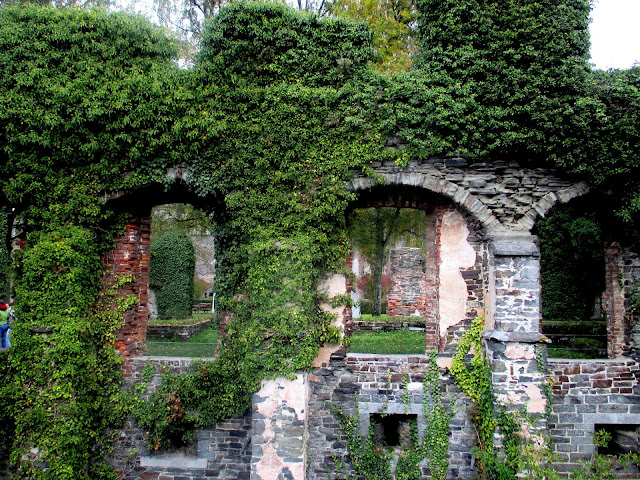 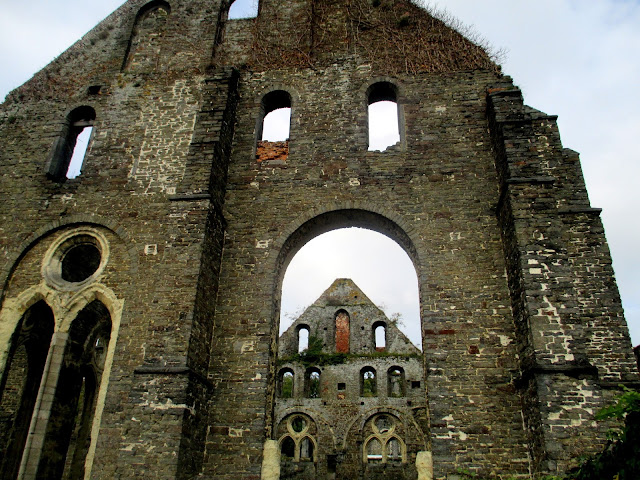 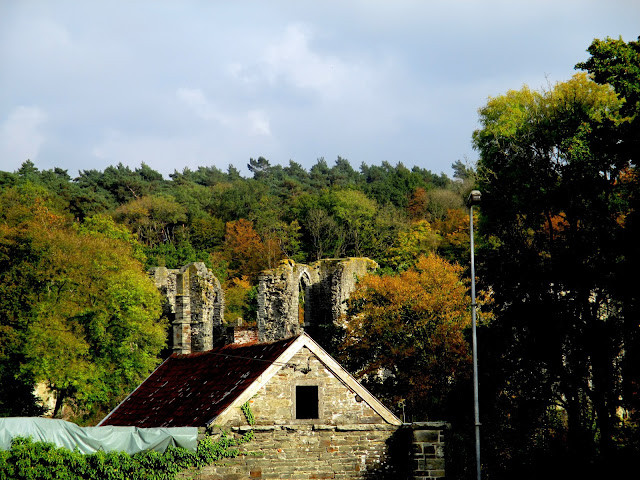 But even from outside it looks very pretty. 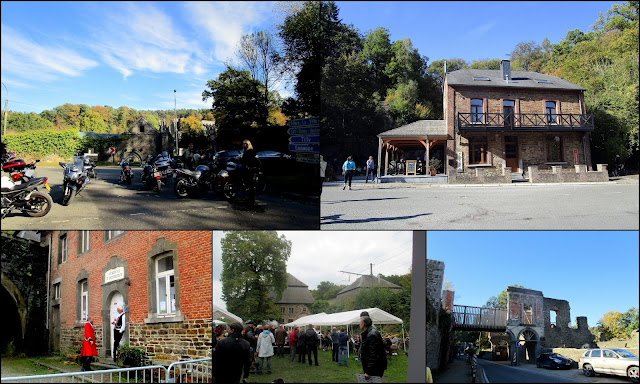 There had been a celebration and people had some refreshments (mostly the good Belgian beer) under the tents. On the terrace of the old café a lot of people were sitting and enjoyed the last warm sunny days.

On Saturday was the vernissage of our painting exhibition. I had to be there to take pictures but I still felt so poorly ! I hadn't eaten very much after my stomach cramps two days before and wasn't sure if I could go or not. Finally I thought I have the choice or  I sit at home and be angry with me and concentrate on my troubles or I go there, make the pictures, chat with my classmates and the visitors, and have no time to think about my miseries ! So I went !

And it was very nice, thanks to the Facebook action we had more visitors than ever and the exhibition was a real  success. 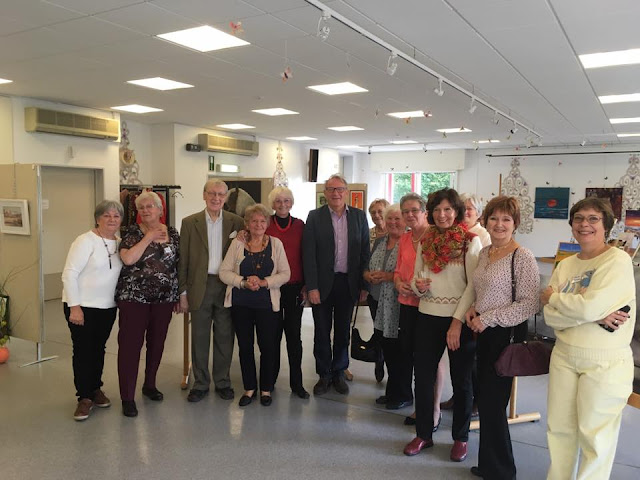 Our group, the 3 girls on the right are my best friends, Nicole, Ilona and Chantal. Besides me on the right is the municipal councillor who always supports our exhibitions. 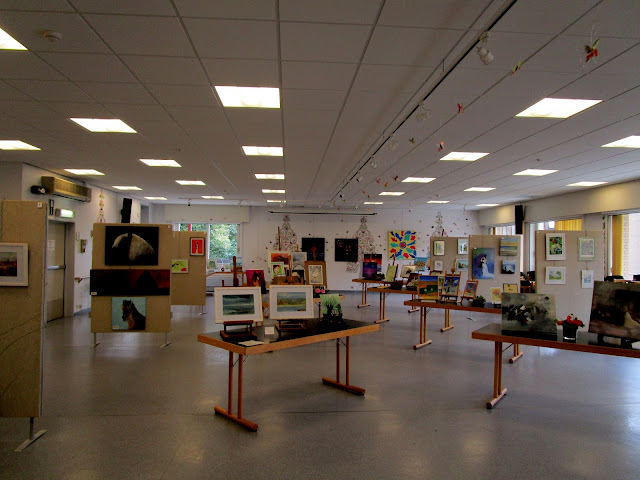 The overlook of the room 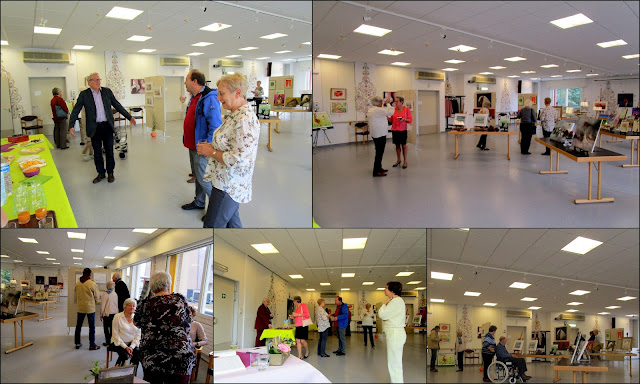 At 3.30 pm I was so tired, my head spun and I went home. Still I was proud of myself  That I could stay that long,  I had arrived at 10.30 am. I arrived home and collapsed on the sofa we had supper and I went to bed very early !

On Sunday morning when I woke up, the house was unusually silent. No meow songs from ol' Pookie and Mr. G.'s opera voice shouting "Shut up" without success as Pookie is deaf he knows it also that I am not ! I got up and noticed that his car was still there and that the shutters were still shut. The reason was, Mr. G. had caught my virus which had been a gastritis, but far worse than I, because I only had stomach cramps, he had it all. Poor men had spent the night running to the bathroom.

I still felt so tired and didn't go to the Exhibition, I also stayed home. Mr. G.  did what the cats do, he slept the whole day and I watched TV. All energy gone. From time to time the phone rang, from the girls who wanted to know if I would come and help and also asking a price for one of my paintings apparently there were some people interested. One painting had been sold ! I was happy !

Nicole took my paintings home, they had a lot of work, because I was not the only one who was sick, another one and our teacher too ! They all had the same, there is a real epidemic around and the drugstores run out of medicine !