1. While we tried to have a fun scrabble in the warm sunshine of Nicole's terrace, there was a shadow hanging over us, Nicole had to decide if it was time to put Charlie asleep. His eye had gotten worse and was almost hanging out. 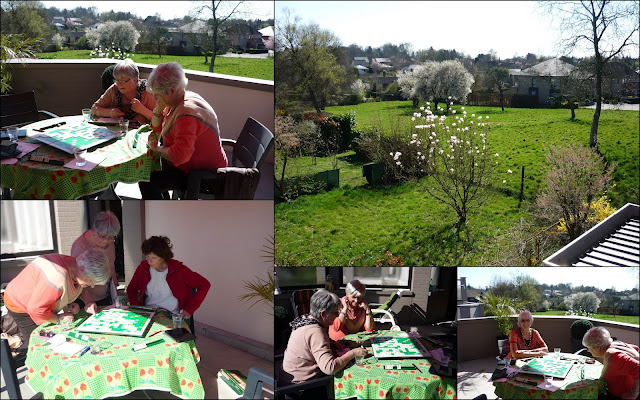 He had greeted me almost as usual but then didn't move anymore and looked very tired.
When we went away, his nose was bleeding and Nicole's decision was made. 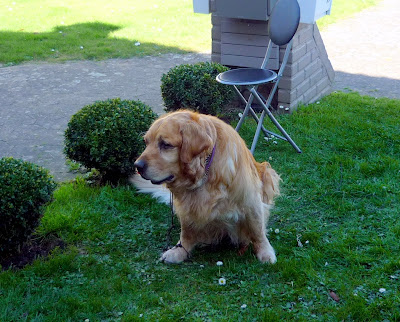 With a very heavy heart I said good bye and this was the last picture I took of him. When in the evening I got the news that he had died, I felt as if somebody had knocked me out with a hammer.
I had such a special relationship with this dog !

2. I went to Ilona who had her birthday and tried to change my thoughts, but it didn't really work because she too was affected. Nevertheless we drank a whole bottle of Champagne (without alcohol !) and the sun was shining. For once I wished it would rain !

3.  Poor Nicole was in such an awful state, I was really very worried about her. She even got lost in Waterloo where she lives for so long and called me to pick her up and lead her home.

4. To distract her an another friend invited us and we were four, Ilona came too. Fortunately we had a very funny afternoon and laughed a lot. From time to time somebody mentioned Charlie, but we were all relaxed. We had coffee and a delicious strawberry cake and another one which Ilona had brought.

5. We had wonderful warm weather with unusual 22°C ! Nicole had suggested to visit the mills of Grimbergen which is a Brussels' municipality. I had never been there and as we both didn't want to stay home, off we went. For Nicole it's very hard to stay home because she sees Charlie everywhere. 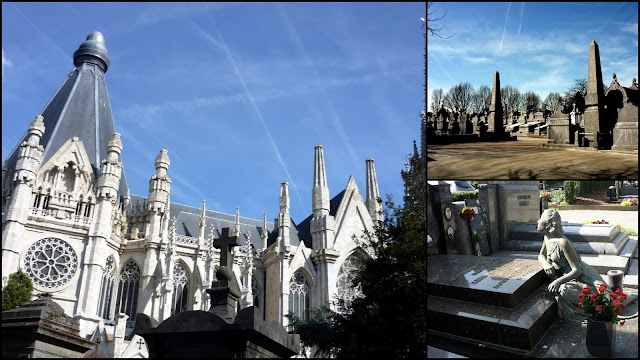 On the way to the mills Mrs GPS took us first to the Cemetary of Laeken which I had already visited because it has beautiful statues and in the church besides all Kings and Queens of Belgium are burried.

After turning around and around despite Mrs. GPS'guidance, due to street works we couldn't find the mills ! 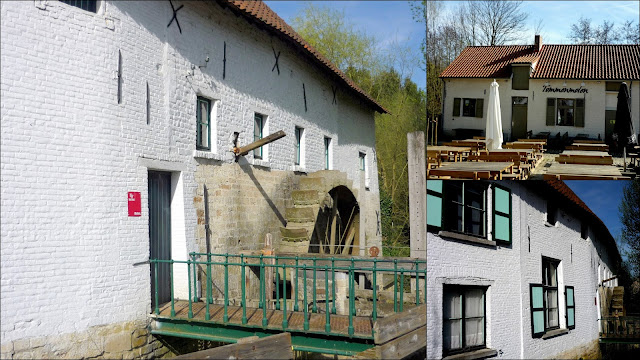 Finally we managed to see at least one, we both were very thirsty, but the restaurant was closed on this day and the mill didn't run neither. No luck. A reason to return and see the others. 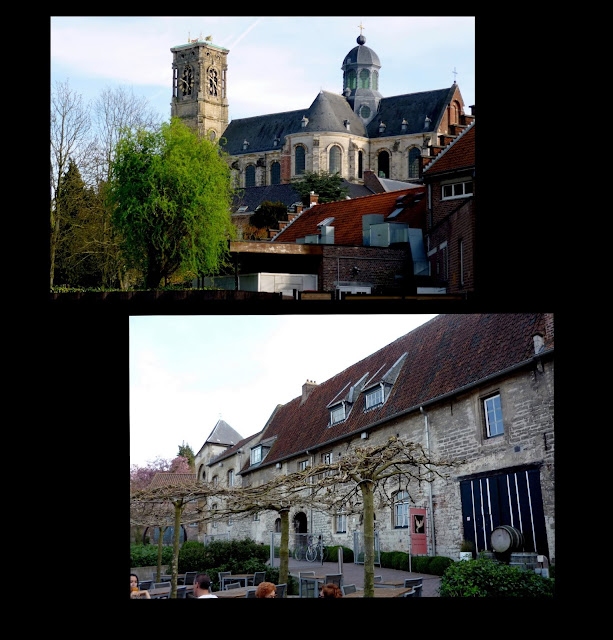 Finally we ended up at the Abbey of Grimbergen, where Nicole had always a drink with her mother. It is a beautiful church and abbey, I had a coffee there but then it was so late that were in the middle of the office traffic and it took some time to get home but it had been a nice day ! 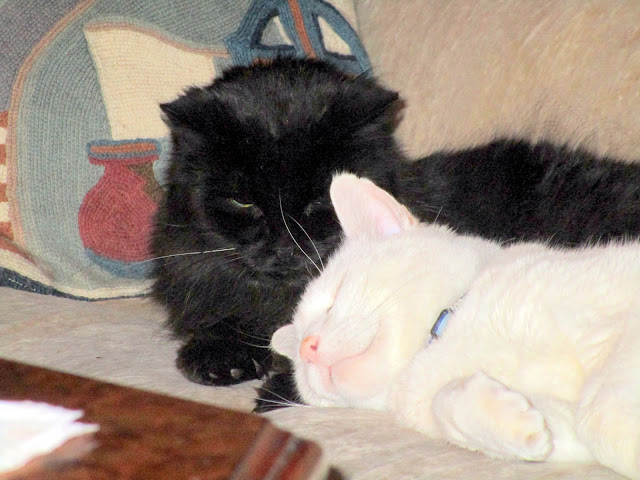 
1. 'Beauty is in the eye of the beholder' What's something you've seen recently that you thought was beautiful ?

See the picture above

2. Our culture and beauty...your thoughts?
I live in a country of"Western culture" which is the culture of European countries as well as those that have been heavily influenced by European immigration, such as the United States, Canada and Australia. Western culture comes from the Greco-Roman era. When you think how the Romans lived, with central heating, sauna and baths, while we were still running around in animal fur and wooden tools, it's just amazing !

Beauty is a vast subject. So many things can be beautiful, landscapes, nature, animals and even humans !

Age before beauty is a stupid phrase, because even age can be beautiful, it's more meant like a joke.
For me today I would need some beauty sleep, although even if I wake up after a good night with a good deep sleep, it doesn't change my face the wrinkles are still there ! So I don't believe in beauty sleeps !

4. I read here a list of the top ten beasts animals that scare us the most-

I am only scared and disgusted when I see a black widow spider or bed bugs! Then I brake the speed record !

Which 'beast' on the list scares you the most? What is the liklihood of you having an actual encounter with that particular beast? Did a movie contribute to your fear of this creature? Have you ever had a real life encounter with any of the animals listed?

Without any doubt the black widow spider, or all spiders, from tiny to very big ! I don't know from where this fear or disgust comes, because I never had a bad experience with a spider, but just the view of them makes me run !

5. Where were you when you last heard a bell ring? Was it alarming or musical?

Yesterday at a friend's the door bell was ringing making ding dong !

6. What's your favorite carb? How's that for random?
I eat a lot of apples each day at least 4

7. Let's wrap up another month of Hodgepodging and life with an acrostic. Recap your month using the word MARCH.

Exactly what I felt !

8. Insert your own random thought here.
I don't know what to think today I am a bit floating around, I lost my friend Charlie the dog, yesterday evening, he had to be put asleep. Although it wasn't my dog, I loved him and he loved me.

From this side of the pond
Posted by Gattina at 07:00 8 comments:

François Mellaerts a business man and his wife bought in 1883, during a public sale, a set of 9 hectar grassland and agricultural land belonging to the Civil Hospitals of Brussels.

At the end of the 19th century, Mellaerts acquired another piece of land in 1898 with two ponds. located not far away, in exchange for its property that it would be integrated into the perimeter of the park of Woluwe then in the realization phase and accessible to the public. The State had to take care of the ponds. Read more here

I tried to spend most of the time with Charlie, because on Friday he was really not well and Nicole had decided that we would go to the vet and have put him asleep on Monday (today). Mr. G. and I went on Saturday to Nicole and we found another dog ! He greeted us brought a ball, and was the old Charlie only a little slower. Apparently he eats like a horse and besides a slightly running nose and heavy breathing when he sleeps, and this now completely white eye, he is OK. So we decided that it was not yet his time. Was I relieved ! I had never thought that I was affected so much by his illness, he is not my dog, but he really loves me, Nicole said that that had never happened and that she is almost "jealous" !

In the evening we had a theater play for the Waterloo seniors. Usually these plays are always very good and very funny. I had never been disappointed. But this time it was really bad ! First, the title "Panic in the Ministry" had nothing to do with the play, it could have been played in every room. The only thing which related to politics was the title of the main actors the secretary of the education department and his secretary ! The text was gross, and to make us laugh it always was related to sex ! Of course it was a French play, with French actors, they couldn't find Belgian once, probably they all refused because the play was so stupid. For the first time people left after half an hour or far before the end. Nicole left after 15 min she had enough, she said she would rather go home and be with Charlie. I stayed just to see the reaction of the public, all over 65, I saw one near me who slept deeply others looked bored but there also were a lot who laughed. I lost my camera, I had taken a few pictures of the stage. Hopefully I will get it back on Monday.

As it was early, I joined Nicole at home and we had supper together, with a very eager participant, Charlie ! And while we chatted, he settled down and snored that the walls shook ! 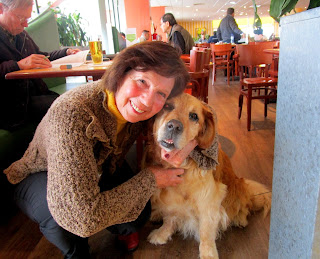 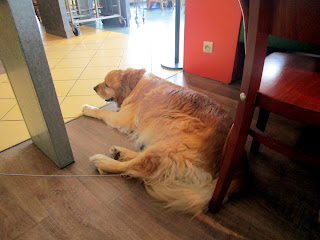 When we were in the "Lunch Garden" Charlie loves to go there.

On Sunday I went to one of the more than 100 parks of Brussels and its communities. It was the park "Parc des Étangs Mellaerts" with two big ponds. It was the opening of the sailing boats for rent and there were a lot of people. 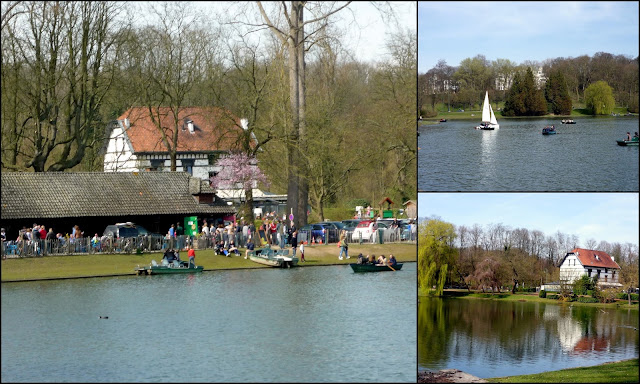 I made some pictures had an ice cream and then went home because although it was sunny, the wind was cold. Charlie had family visit today, so I rested a bit to be in shape for the coming week.
Posted by Gattina at 07:00 6 comments: