I am a little confused with holidays in the middle of the week, so I take Monday for Sunday and Wednesday for Saturday etc. I am all the time looking at the calendar, fortunately I am not the only one !

Our son has the week off between Sunday before Christmas til Sunday after New Year, so he could stay a little longer, while my DIL returned on Sunday, she had to work on Monday.

On Monday 5 of our Scrabble group had a get together for Christmas at Khadijah's home. Although she is Muslim she had decorated her house with Christmas tree and ornaments and it looked very cosy. We all had brought a cheese plate and also a cake and the drinks, so she didn't have any work and we had a lot of fun. 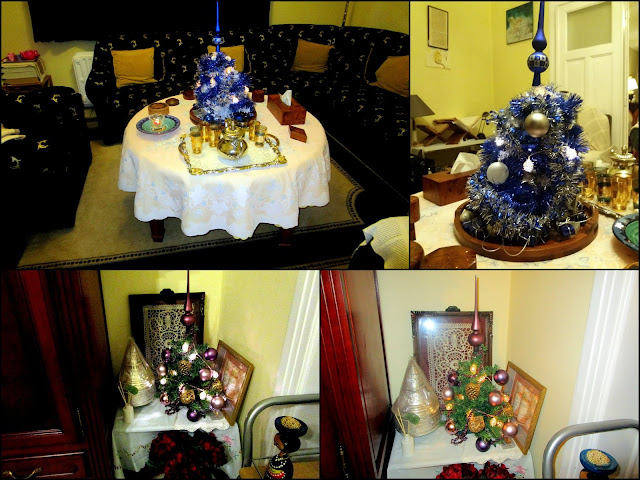 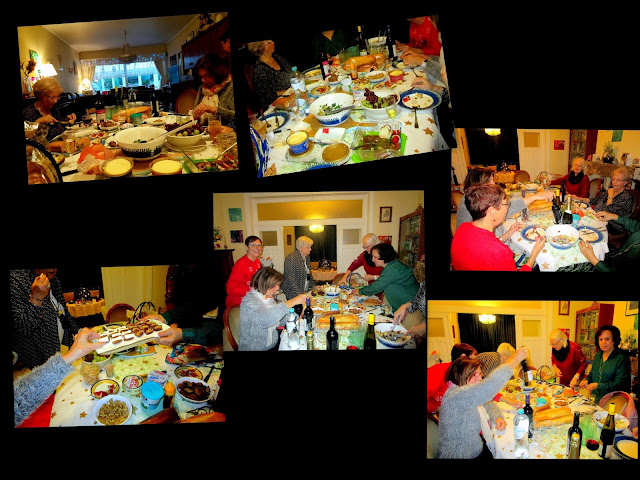 Nobody could eat anything for supper !

The next day before leaving for Amsterdam my son and Toby came for lunch and we chatted until it was time to leave. Fortunately there was not too much traffic and they arrived rather quickly. 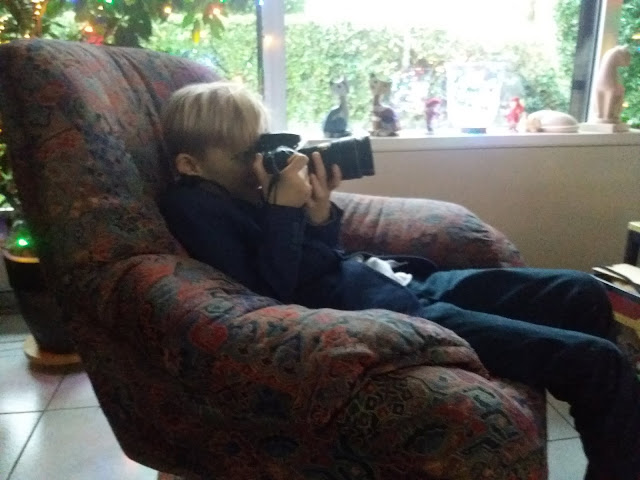 I forgot to take a picture before they left, but Toby handles his Dad's camera already like a professional ! The only hic is that I always get winter pictures in summer and the other way around. And when I ask for two photos I get 20 and when I ask for photos of a whole week I get one !

We spent Christmas Eve alone in 50 years, I mean the two of us and the two cats. But in life it is always a first time. Honestly I didn't care,  I was invited by Nicole who was alone too,  but too lazy to get up from my sofa to join my friend, when Mr. G. went to bed as usual at 9 pm.

I watched a show on German TV and was surprised how much Christmas had changed !  It had taken the good and funny Christmas uses over from the States  and even had translated songs like "last Christmas" into German which sounded a bit funny to me. I watched almost til the end, but went to bed before.

A part from the laundry which has to be done too from time to time, I spent most of the time in front of our TV or the computer, I was not really tired, but felt a bit KO and therefore very lazy ! Even moving a finger takes an enormous effort ! 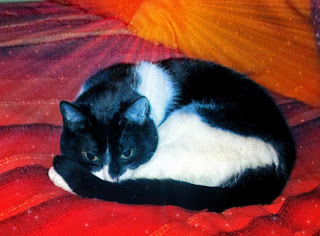 more participants at Susanne at Living to tell the Story.
Posted by Gattina at 07:00 5 comments: 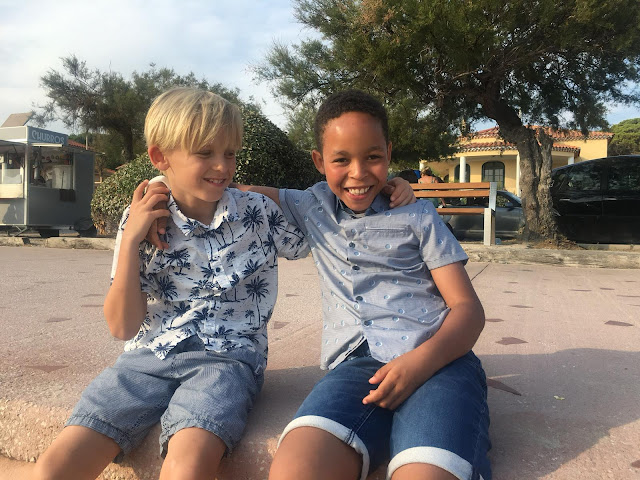 When you cry out of laughter, a rainbow is created in your head! 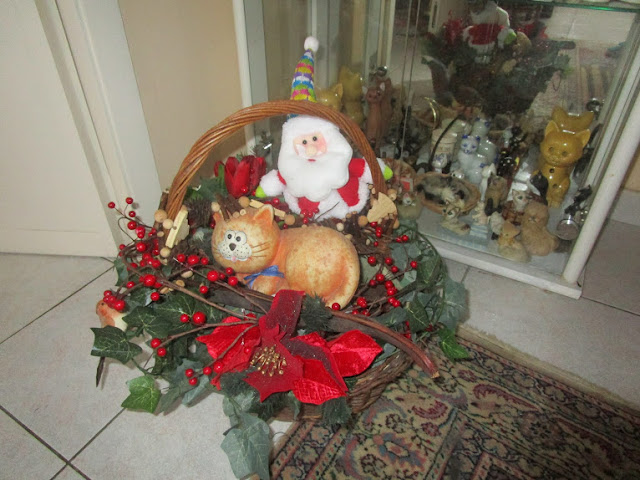 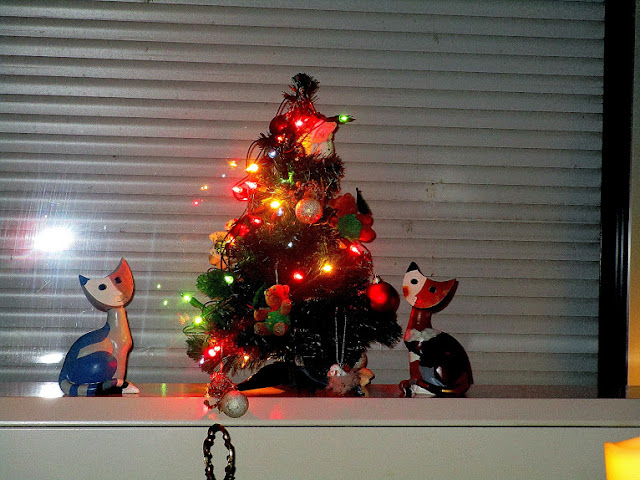 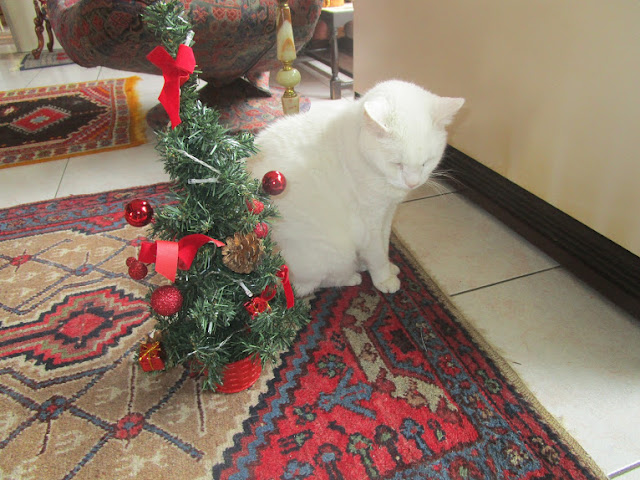 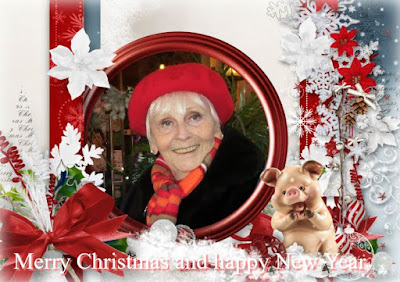 I celebrated Christmas three times so far !  I hope this will be the end until it starts again for the New Year.

While we in our world have tables overloaded with food, there are so many who have not enought to live. Unfortunately alone I can't do anything against it. 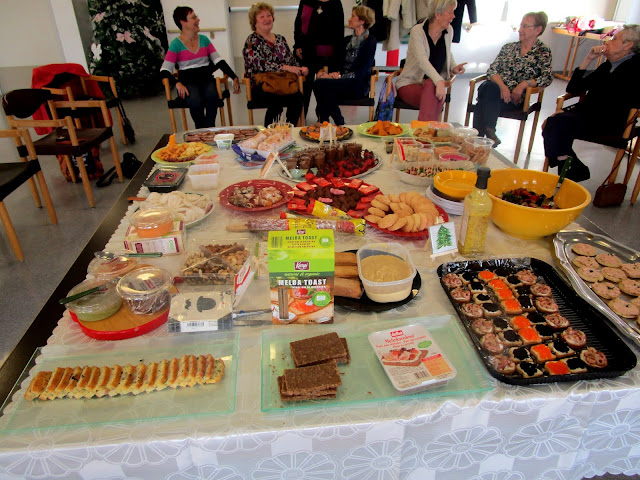 First celebration was with my Painting class. Everybody had brought a speciality and a drink. 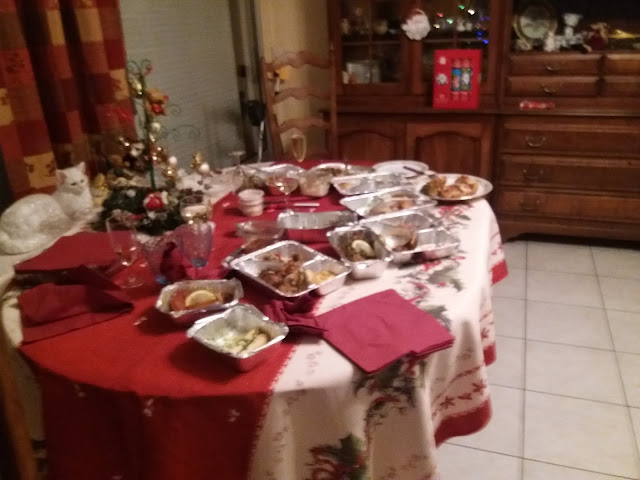 Then with the family, a bit early, but there was no other date. Didn't matter, it was nice. 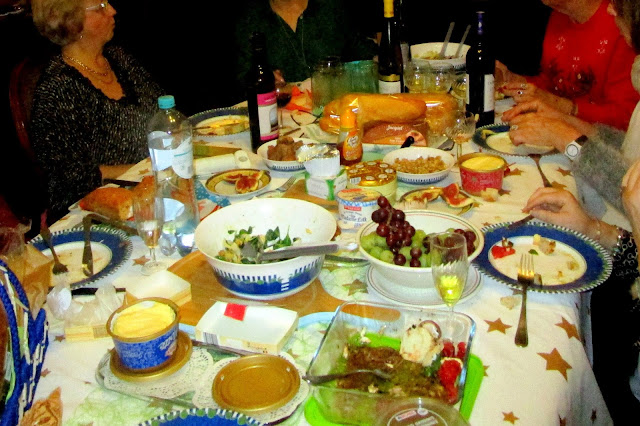 and then last but not least, with my Scrabble friends. There too everybody had brought a plate and a drink. We had a very funny afternoon which lasted until 8 pm !

Not much time to write these days ! 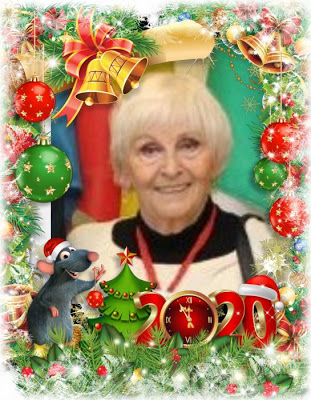 I wish you a merry Christmas and a happy New Year ! 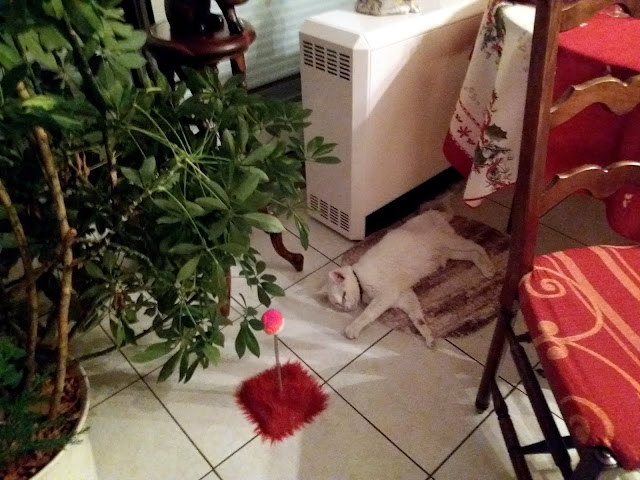 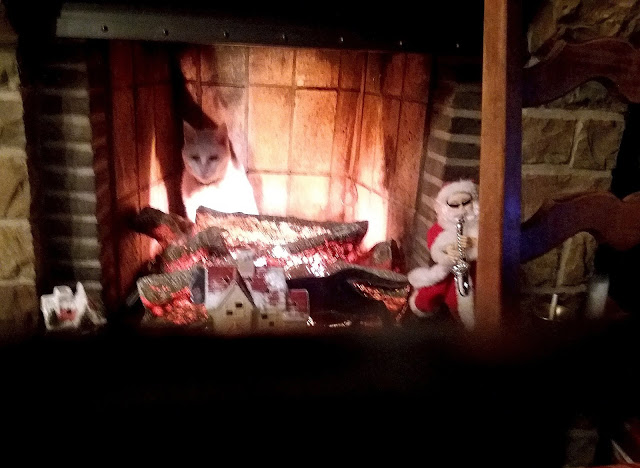 I have to make  a memorial for myself ! I only don't know where to put it, maybe in an extra private post in this Blog. The reason is that for the first time in my whole life I haven't spent Christmas Eve on December 24 as respectable people do (would my father say) !

Since I am married,  instead of the December 24 at 6 pm sharp, dressed up in our most festive clothes we had a glass of champagne together with my parents while we listened to Christmas music and unwrapped the gifts which lay under the tree. Then for years we had a Fondue Bourgignone.  I had always spent Christmas Eve with my parents alone, my grandma was never invited, I wanted to spent Christmas in our home as a freshly married couple. For my father it was a drama that we put up the tree a week or two before depending on our free time as we were both working, as he only did it on the 24th ! Apparently it was the use in his family.

Then came the time when we became parents. Each Christmas they came for at least a week, unfortunately it was no joy but fights, as they critisized everything. The way I kept my household, the way we raised our child, and they found a hundreds of reasons why Mr. G. was not the perfect man for me.

When my mother had passed away my father came here for the first and last time at Christmas, because I didn't exactly what his wife had to do. The years after we had to drive to Germany to spend Christmas with him, for me a torture. Fortunately at that time my son had a French girlfriend who came with us and  cheered me up and the next day the 25, we had to drive to France  to spend Christmas with her parents and 2 siblings. This was completely new to me and I loved it. Unfortunately the relationship broke and we were three again. Meanwhile my son had moved to London and I learned how to celebrate the English way ! The following years were the best Christmases I had, I think it was 2 or 3 times.

Then came the next change. He fell in love with a Dutch girl who didn't know a lot about celebrating Christmas, but did her best and we met her for the first time at Christmas Eve in Waterloo. When they had a little apartment we celebrated in Amsterdam. My son invited all his English friends who couldn't go home so that they were not alone on Christmas Eve, which I found really nice and it had been a very funny Christmas too.

When Toby was born it became again different. They were so busy with the baby that they forgot everything around them. On top we didn't open our gifts on Christmas Eve but on the 25th, which I found awful ! In pyjama and bathrobes half sleeping and not in the best mood so early mornings. I couldn't understand why my son who his whole life had celebrated the German way suddenly wanted to celebrate the English way. I love the English way, but not the fact to get up early morning and fight with gift paper !

I protested, I was ready to go on strike and not celebrate at all with them even Mr. G. agreed.

And this year it was a completely different Christmas from all the Christmases I had ever celebrated in my whole life.

I became philosophic, I asked myself why do I stick so much to traditions and principles  ? For what ? Why did I cry because Christmas was not like in my childhood and youth or later why did my son not teach his son our traditions ? And suddenly I thought I am silly or stupid or whatever. Why spoil the rest of my life with principles ??

So with joy I agreed to Christmas Eve on the 21st together with my son's best friend and family, and instead of having a traditional Christmas meal, dressed up sitting at the table, with the silver cutlery and the best dishes, we pushed the table to the window "threw" dishes and cutlery (the one from the kitchen) on the table my son picked up a delicious Libanese meal, which we didn't even put in bowls but left them as they were wrapped in plastic boxes ! Too much work they said and they took care of everything. I was sitting like a queen on our sofa, (Mr. G. was chased from the kitchen too) and when everything was ready we lined up and everybody took what he wanted. That was real fun ! After the meal we had Christmas Crackers also unknown, I had found them in my English shop, and then we chatted while in the background Christmas music played, cat Arthur meowed for  food and the two boys had a lot of fun with a game. I had bought a metal detector for Toby which he first had to assemble with mums help and then they were looking for metal (gold, money you can always dream) in the whole house. 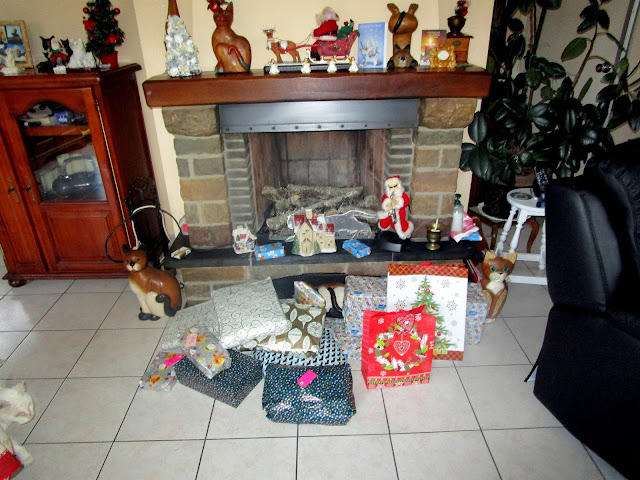 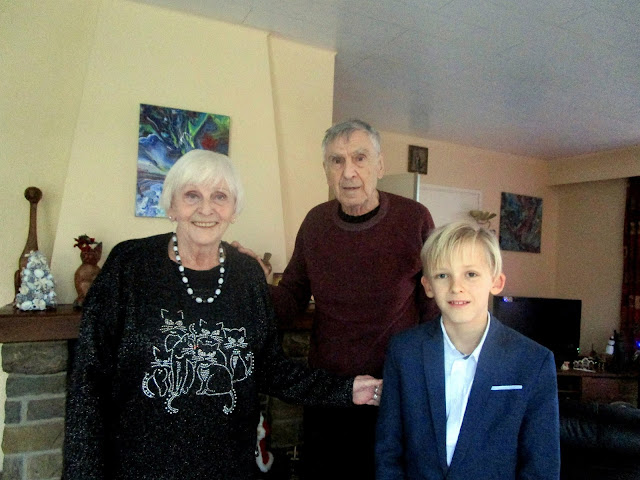 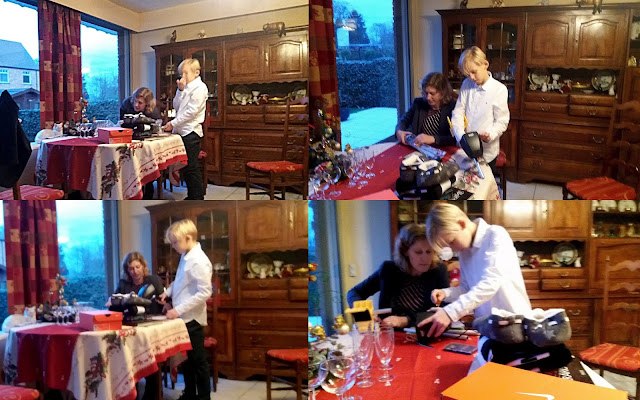 Assembling of the metal detector with mum's help 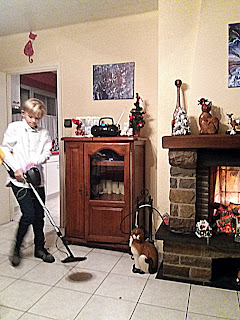 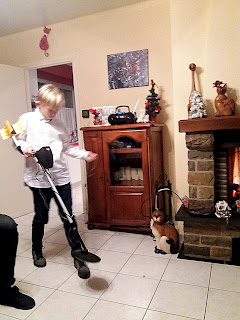 Looking for metal, coins and gold .... 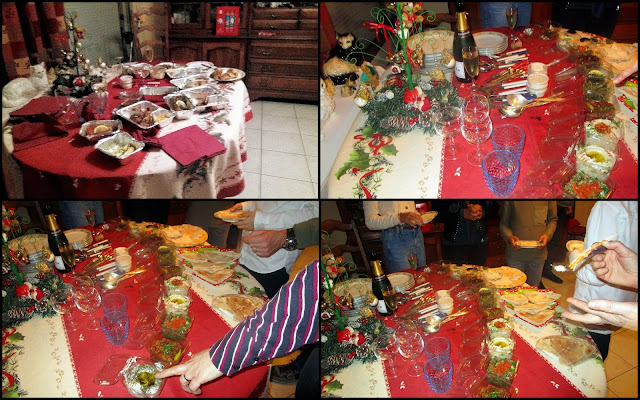 The table full of a variety of food, cold and hot 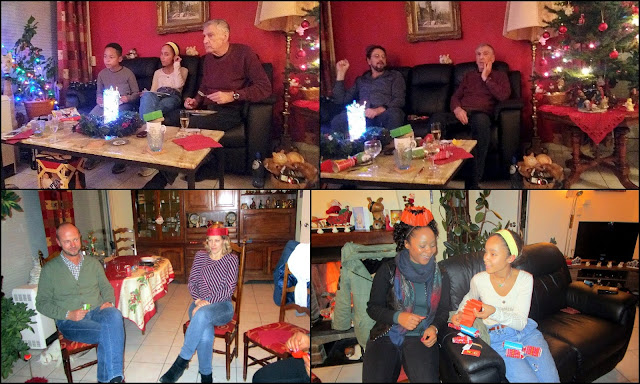 With full bellies a little rest 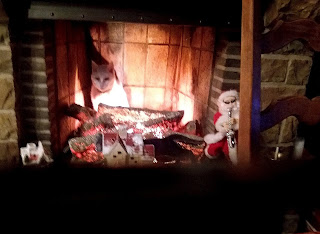 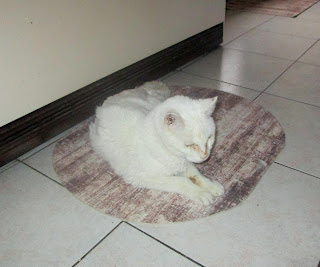 18 year old Arthur had also a full belly and earned a good rest !

What a nice Christmas !! No stress, no fights, only laughter and joy ! As it should be 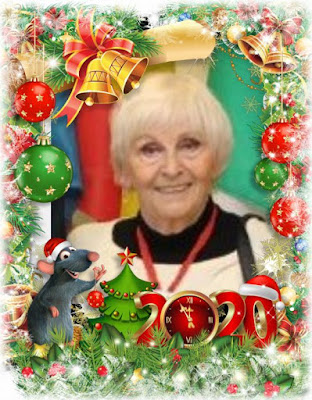