1. On Sunday was election day in Belgium. On Monday the whole day we were informed about the results.

There are 13 parties to choose from, and finally the result was this cake above. The Americans have it easier with only two parties ! Now our King to everybody's surprise has asked the Flemish nationalist to form a government for whole Belgium. That cut the grass off under this guy's feet, who not only wanted to form a Flemish government, but also wants a republic and no King anymore. Now he is forced to play the game and has no other choice. The King is clever he made a "friend" of his worst enemy. We all rubbed our hands in malicious pleasure. Impossible to split the country now.

2. Besides my Yoga class I didn't do anything special, except that I was in the mood to buy some new feathers which doesn't happen very often. 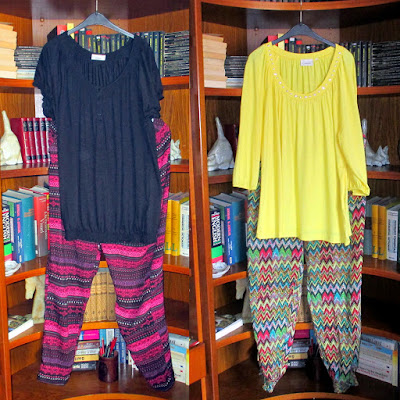 Therefore I made a tour in a nearby store and came back with two new outfits, perfect for my forthcoming travel to Cornwall.

3. It was cool and rainy and Nicole had invited me, we couldn't go out for a walk so we stayed home and dog Charlie was happy to see me and brought me his toys. 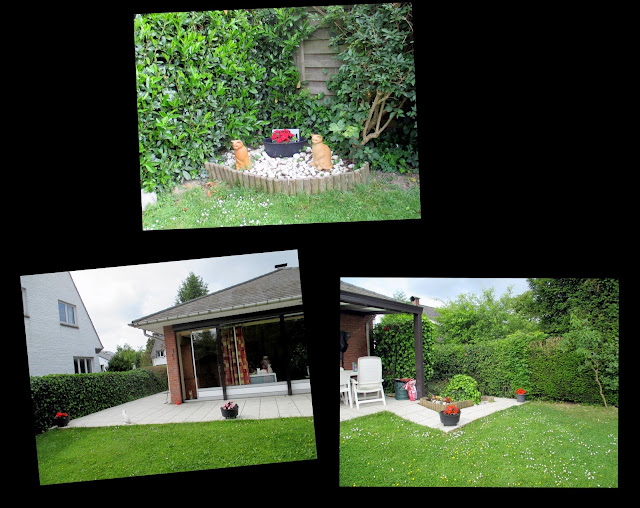 My garden chores are finished until autumn I have planted the last flowers in the pots on our terrace and also on our little animal graveyard. Besides cutting off the ivy which grows like weeds, I should have no work to do anymore. What a relief !

5. On Sunday afternoon I was invited for coffee and cake at Ilona's mother. I showed her the pictures I had taken at her 90th birthday celebration. She really was very happy about it and asked me for some copies. But I think I will make a photo album for her. 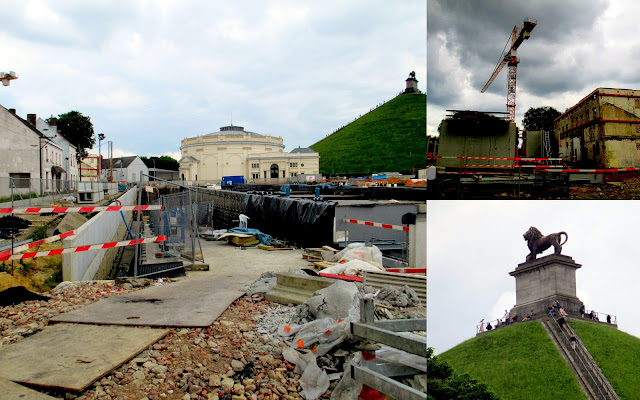 After that we made a tour at the Waterloo Lion. There were a lot of tourists there from all countries ! The site is in an awful state, because it will be completely transformed for the 200th anniversary of the battle. The costs are estimated to € 40 million Euro (54 million $) for this project. The works had begun last year and should be finished by June 2015. As it looks right now, there is still a lot of work to do !

There will be an underground museum, on the picture above you can see the entrance to the museum. I like to go there from time to time just to see how far they are with this project.

My grandparents had moved to Schlüchtern a little town in Hessen (Germany) to avoid the heavy bombing of Frankfurt where they lived. In this little town the war seemed far away, except that it was difficult to buy food, but it was still easier on the countryside then in a big town. My mother followed when I was born in 1943 and stayed with her parents. All I can remember was that we all lived in a big timber framed house together with my grandpa's brother, his wife, some sisters and the house was packed. 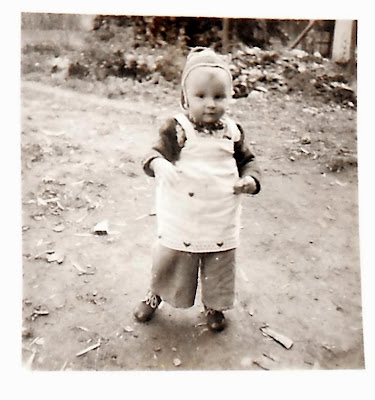 I must have been 2 or 3 years old, but I still can remember the courtyard and a little boy who shared my room and who cried all the time. Fortunately my grandparents found two rooms to rent in a big house owned by a widow and a little later they moved into a small apartment where my grandma stayed until she was 85. They took me with them and I stayed until I was 6, then my parents took me back to live with them.

Of course there was no bathroom nowhere. People went once a week usually on Saturdays to the public bath. I remember that my grandma packed towels and soap in a bag and off we went to have our weekly bath. There I was already older maybe 4. Before that, it was an exciting preparation when it came to my bath time on Saturday morning. 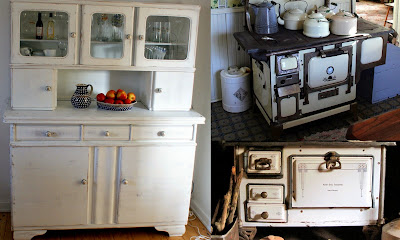 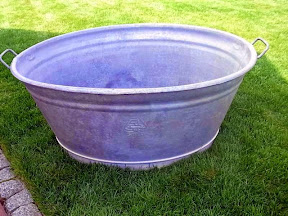 I tried to find similar pictures of the cupboard and the stove as I remember.

My grandma heated water on the kitchen stove, took out a big zinc tub which she put on the kitchen floor. The kitchen was the heart of the apartment, we stayed in there all the time, it was warm because of the kitchen stove which is known as a "range" in the UK. It was a very cozy place, with a large table, chairs and a cupboard.

When the water was heated she filled in the tub checked the temperature of the water and then put me in. What fun it was, splashing in the warm water. She scrubbed me with soap and when I was clean enough in her opinion, she wrapped me in a warm towel, which she had hanged at the stove. Later on, my grandpa would go to the public bath and then my grandma, one had to stay with me of course !

I almost had forgotten this Saturday ritual, but I noticed that with the age, suddenly childhood memories come back. 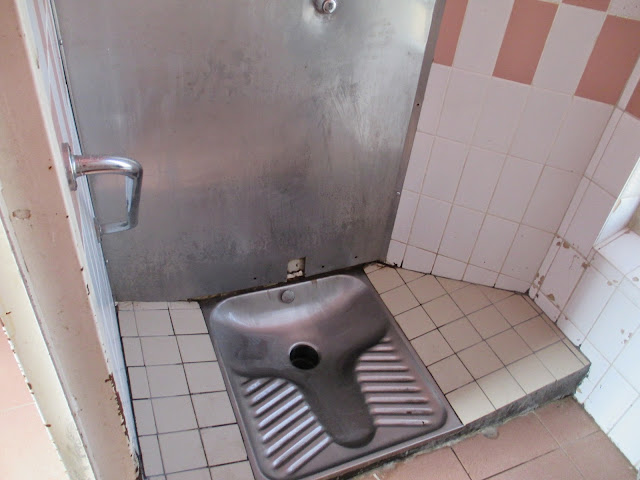 Lady's WC in a rest area on a highway in France

I had never been to the park "Le bois des rêves " (Wood of dreams) although it is not very far from where I live. It was a beautiful sunny day and together with my friend Nicole and dog Charlie we decided to discover it and have a nice walk.

It is the ideal place for walks and tranquillity, but also for  sports lovers and fishing enthusiasts  and on fine summer days many people enjoy a swimming pool which was still closed.
The Park also has a playground, barbecue pitches and a nice restaurant. 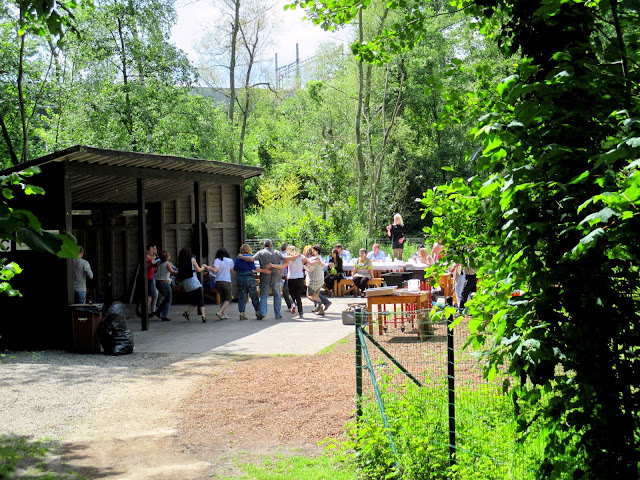 When we arrived we heard loud Greek music and then saw people dancing the Sirtaki obviously having a Greek party. 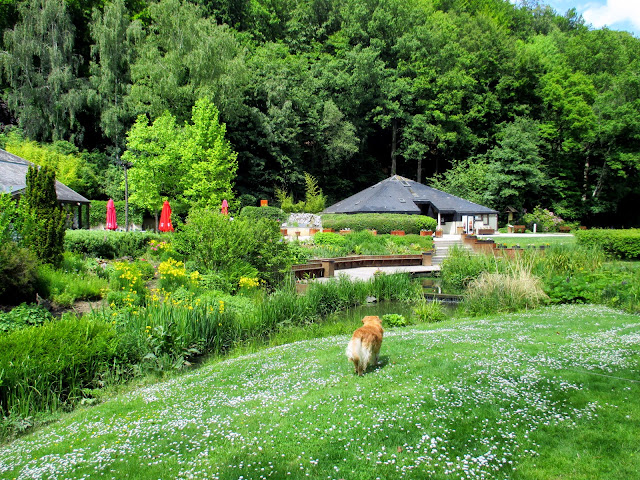 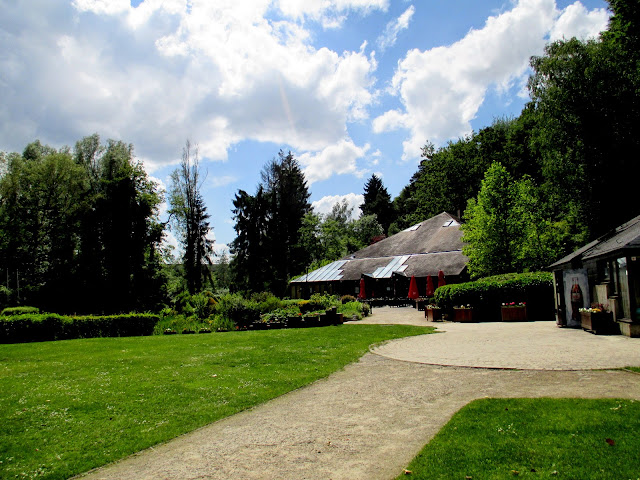 The restaurant was near the wood with view on the lake. 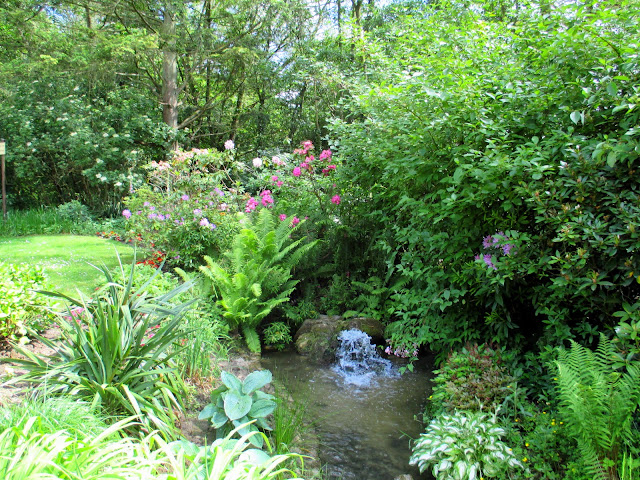 There was a little river which splashed over the rocks 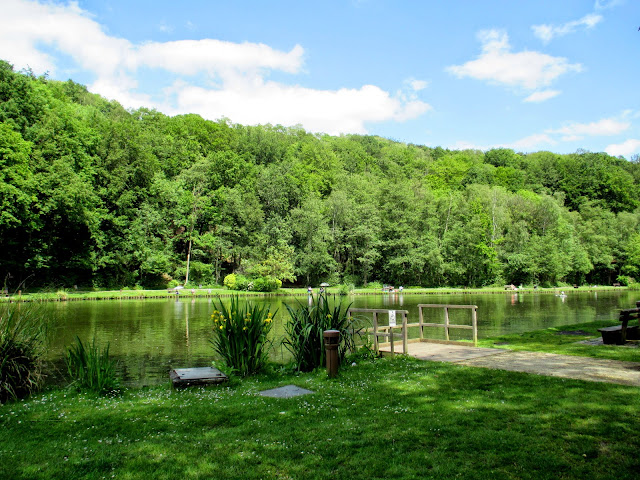 The wood was so green in all different shades and was reflected in the water which seemed green too. 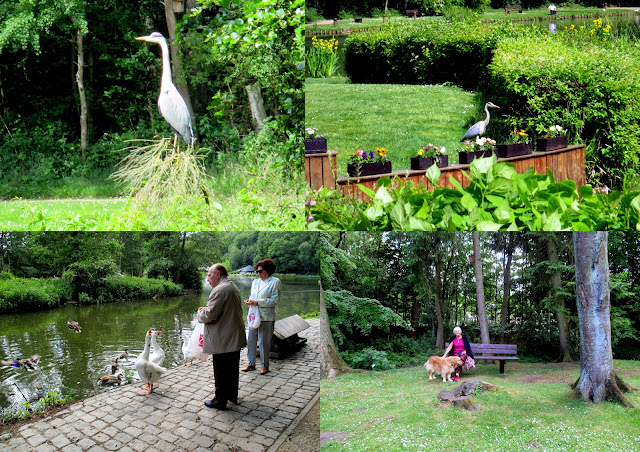 We saw an heron waiting for his prey and people feeding geese and swans. 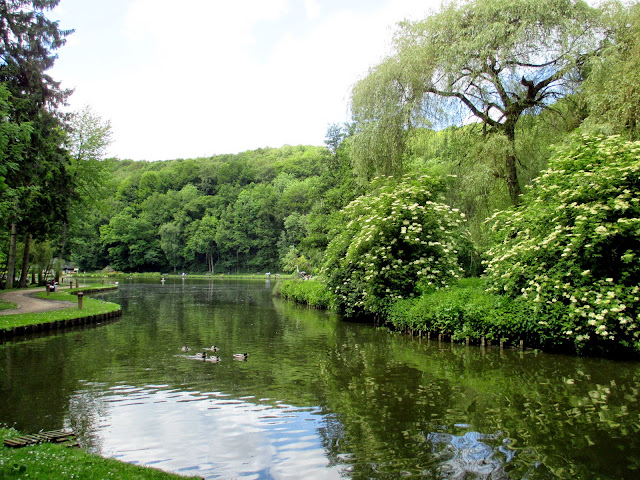 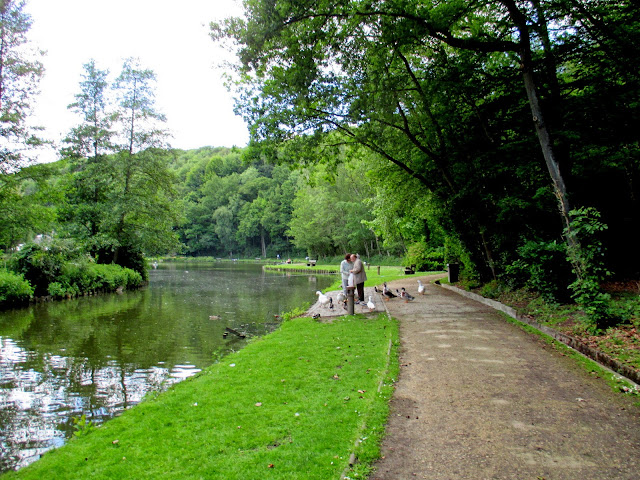 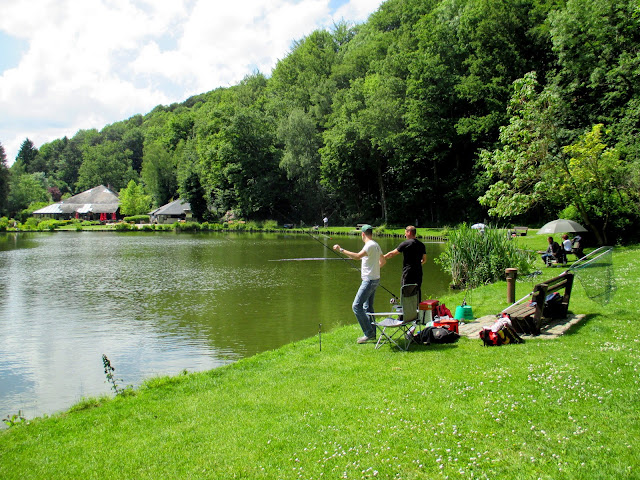 We did a long walk through the wood and then made a tour around the lake and watched the fishermen sitting there and waiting for a fish to come. I still wonder why this is called a sport. They hardly moved !

The whole domain is 62 hectares big (153 acres) mostly wood and I am sure that there is some wildlife in there too.

We ended our walk having a drink on the terrace of the restaurant and watched the Heron, still walking around. What a nice afternoon.

MY WEEKEND OF MAY 24

Nicole and I decided to go for a walk into a park I had never been before. I will write about it in another post. 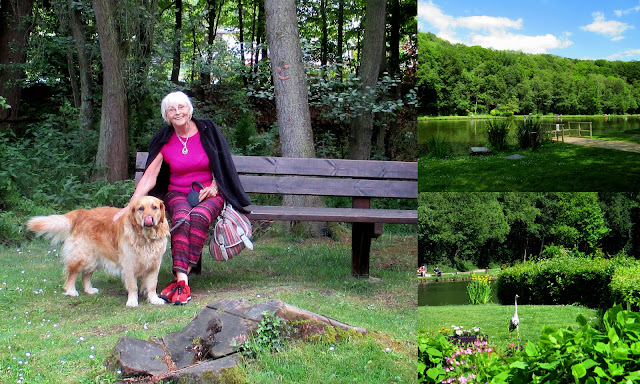 The sun was shining and it was just so relaxing to walk around the little lake and then had a drink in the restaurant. 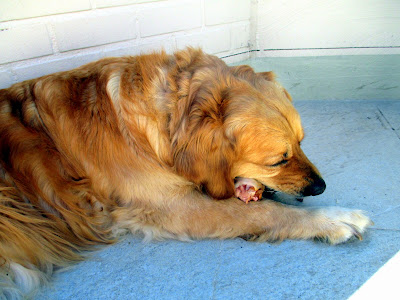 Mr. G. had asked his friend on the Waterloo market for a big bone for Charlie. We ended the afternoon on Nicole's terrace with a happy Charlie ! He had smelled immediately what I had in my hands and took the whole package with the paper so quickly that I had no time to unwrap it.

On Sunday was a big birthday party for Ilona's mother who celebrated her 90th birthday ! 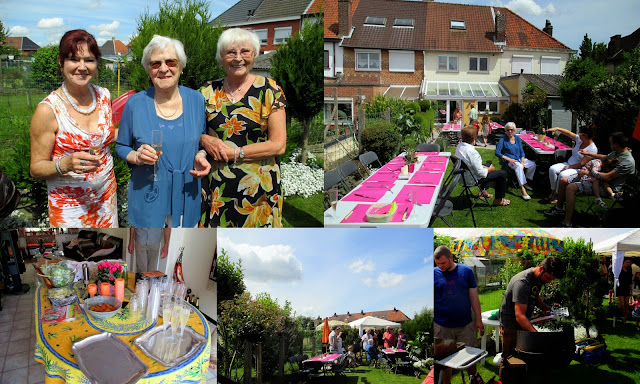 Her daughters, granddaughters, great granddaughter had prepared a buffet with all kind of salads and the great grandsons did a wonderful barbecue. In Ilona's garden 6 big tables were dressed, we all had a lot of fun. Ilona's family is quite big there were about 40 people ! 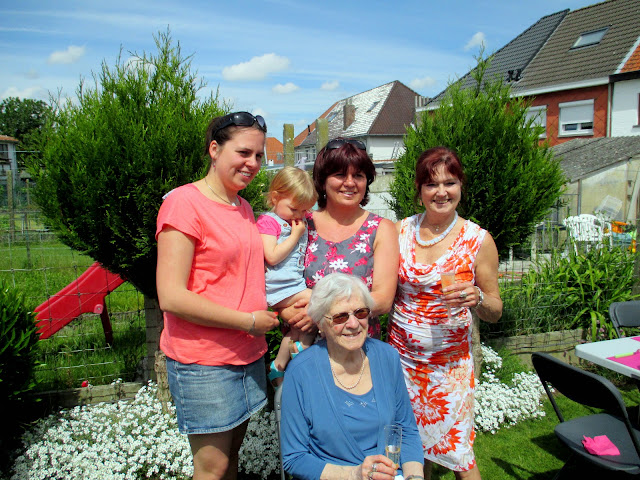 She went from table to table to speak with everybody and then sat down and ate her barbecue with appetite and had several glasses of Champagne and red wine ! She really doesn't look her age, and is feeling fit and young, she still lives alone in her apartment, does her shopping and cooks and when travels are organized by the city for seniors she is always with us ! 3 years ago she went on a tour with her friend through Israel, Jordan, and Egypt ! It is nice to age like her !