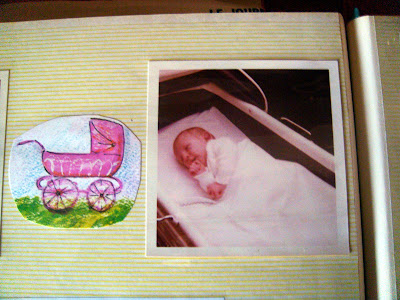 Between these two pictures 35 years went by ! I can't believe it ! On the 20th my son had his birthday and today we will celebrate this event ! I 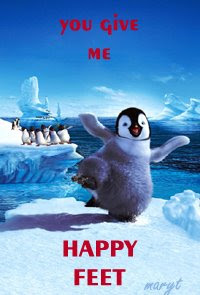 I have got this very cute "You Give Me Happy Feet" award from The Teach ! Thank you very much and I will try to keep your feet also happy in the future !
Posted by Gattina at 06:38 12 comments:

My cat collection has grown again during the last two months ! So I show you the newcomers ! 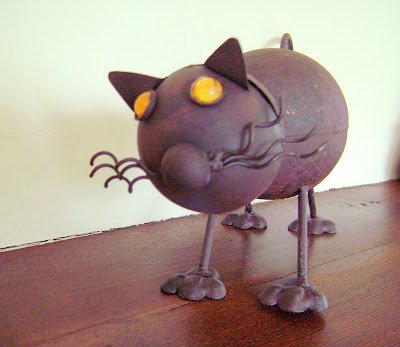 a metal cat which shakes its head when you touch it ! I got it from a girlfriend 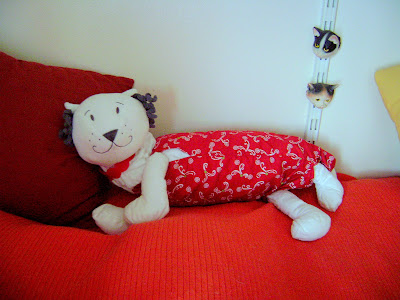 When I saw this little cushion at Ikea, I absolutely had to buy it for my bed ! 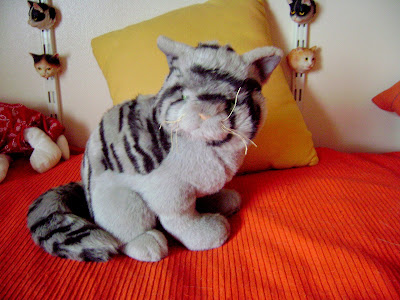 to keep company to this 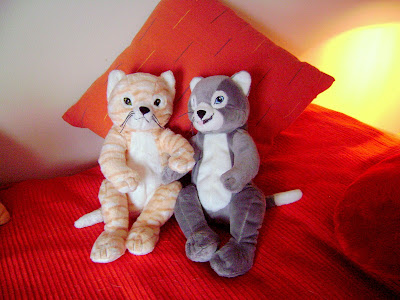 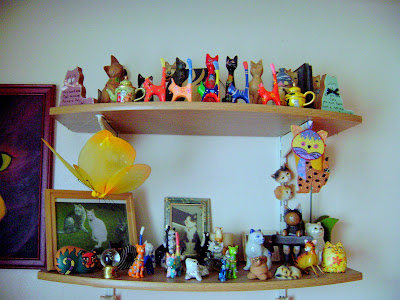 And here is what is hanging over my head (or bed). Now that I celebrated my 65th birthday I can finally decorate my bed just as I want without being "childish" ! (Hehe !) Although not everybody agrees, but that's their problem ! 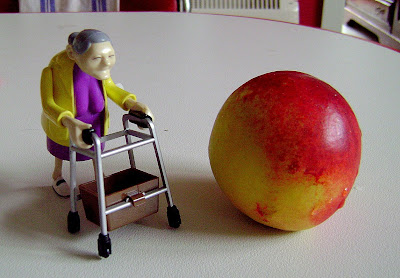 I got this little grandma from my friend in England, just to see how we will be (or not) in a not too near future ! It sits now on my microwave in the kitchen.
Posted by Gattina at 05:30 23 comments:

1. It is great to be a blonde. With low expectations it's very easy to surprise people.
Pamela Anderson (Canadian Model and Actress)

2. There's only one sort of natural blonde on earth - albinos.
Marilyn Monro

3. My real hair color is kind of a dark blonde. Now I just have mood hair.
Julia Roberts

4. A woman has a much better chance than a man of acquittal on a murder charge. If she happens to be a blonde her chances rise about 45 percent.
John McGeorge

5. It was a blonde. A blonde to make a bishop kick a hole in a stained-glass window.
Raymond Chandler

6. Blondes make the best victims. They're like virgin snow that shows up the bloody footprints.
Alfred Hitchcock

7. I was in love with a beautiful blonde once, dear. She drove me to drink. That's the one thing I'm indebted to her for.
W. C. Fields (American Comic and Actor)

8. It isn't that gentlemen really prefer blondes, it's just that we look dumber.
Anita Loos

9. Being a Southern person and a blonde, it's not a good combination. Immediately, when people meet you, they think of you as not being smart.
Reese Witherspoon

10. She was what we used to call a suicide blonde - dyed by her own hand
Saul Bellow

11. Picasso had his pink period and his blue period. I am in my blonde period right now.
Hugh Hefner (American Publisher of Playboy magazine)

13. It was a blonde. A blonde to make a bishop kick a hole in a stained-glass window.
Raymond Chandler
Posted by Gattina at 05:48 16 comments: 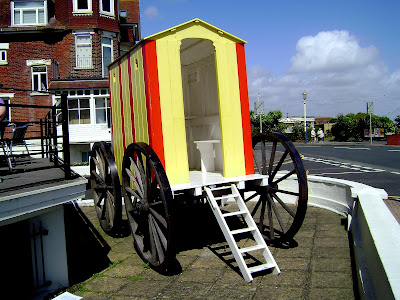 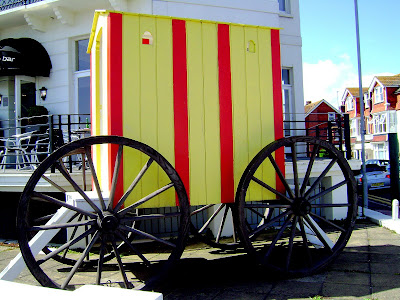 This strand cabine was at the seafront of Eastbourne. It showed how the Victorian ladies were carried into the sea so that nobody could see them in a bathing suit.

Frank Evans quit in 2005 but has been lured back
A British matador who has come out of retirement has taken part in a bullfight in Spain.
He intends to resume his 40-year bullfighting career after three years away due to health problems. Speaking after the bout, he said being in a bullfighting ring "felt fantastic" and added: "It is where I am happiest". I wish the bull good luck and Mr. Matador an even happier stay in his coffin.

An Ohio man with a hatred of paper money slapped down $8,000 in coins at a car dealership to buy a Chevrolet pick-up - then paid the rest by cheque. James Jones, 70, produced 16 coffee cans full of coins to buy his new Chevrolet Silverado and staff spent 90 minutes counting it.
The coins included "dimes, quarters, half-dollars, silver and Susan B Anthony dollars".
The new owner of the Chevy says he does not trust banks or paper money. I hope the car seller has offered him a big piggy bank for saving for his next car !

Assasin's guns hidden in a pram

ARMED police examine an “assassin’s kit” they found in a car boot (trunk) — hidden in a pram.
Police swooped on a grey VW Golf after being told that a CCTV camera had picked up a rifle on the passenger seat. Cops retrieved a AK47, along with a Desert Eagle self-loading pistol, a Glock 17 pistol, a revolver and an air rifle. Why did he put the pram in the boot ? Walking around as an innocent grandpa pushing a pram would have been far more efficient and without risk, unless somebody wants to admire the baby !

Boots are made for crawling

BEN the 80-year-old tortoise has had a set of shoes made specially for him to protect his feet.
Ben suffers from arthritis and can't lift his legs sufficiently to walk causing painful abrasions and sores to his feet.They are not the most stylish footwear but Ben thinks they are boot-iful. I think so too !

THE Queen’s bodyguards at Balmoral are going green by swapping Range Rovers for bicycles.
Cops protecting Her Majesty at her Scottish estate are being urged to patrol it on mountain bikes rather than gas-guzzling 4x4s. The move is designed to save fuel and provide a more eco-friendly way of guarding the Royals on their summer break. Very good ! I approve, it's far more healthy on a mountain bike to move around then sitting in a car the whole day ! I tell you ! this queen thinks about the well being of her employees !
Posted by Gattina at 06:12 8 comments:

The question is : What is one thing you would like to ask your readers? Come up with a question to pose to your visitors and throw it out there on Monday. As we’re all visiting each other’s Fun Monday posts we should answer the various questions we come across.

Asking a personal question which would fit on all my readers is not so easy ! I usually know why and when they started with blogging so this question is already out of question !

But I found 5 other questions for my readers :

1. If a funeral procession is at night, do you drive with your lights off?

2. If a turtle doesn't have a shell, is he homeless or naked?

3. If someone with multiple personalities threatens to kill himself, is it considered a hostage situation?

4. What do sheep count when they can't get to sleep?

Answers to these questions would enrich my life !

On my way to Eastbourne (England) I stopped for 3 h in London. I hadn't been there for 7 years and I just wanted to walk a little around. I showed already the pictures I took around the Buckhingham Palace here. 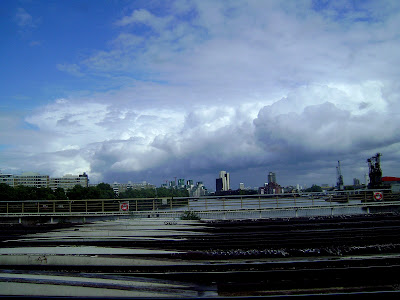 Approaching the station I saw the skyline of London