On Monday finally we could pick up our visa for Russia. We got a number and 10 min later our number was called and a very friendly young man who spoke perfectly English gave us our passports. 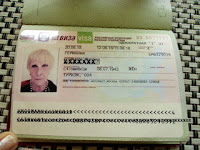 He joked when he saw us life and on the pictures of our visa which is glued into the passports. We said we really looked like dangerous terrorists, and we all laughed. So now we have all requested papers for our 10 countries round trip.

As 3 of our scrabble group were on holidays, I went to Myriam and we sat the whole afternoon 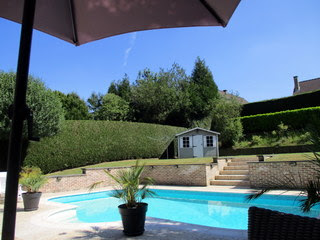 in her garden and chatted. It was too warm to scrabble and then only two is not much fun.

The school year is finished, officially on June 30, but a lot of people are already away. 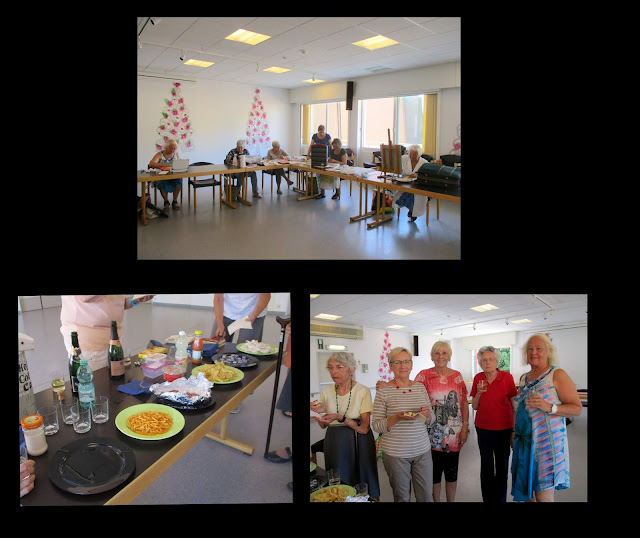 For us too it was the last day of the "year", and we celebrated with champagne and snacks, and even a little birthday cake. Anyway we arranged that we can use the room in August and will get together without teacher. Otherwise two month holidays are too long if you are retired and on holidays the whole year !

As it was so nice and warm 6 of us decided to have a sandwich or salad in a little snack, but with a huge terrace. We arrived around 12 and suddenly it was 3 pm ! 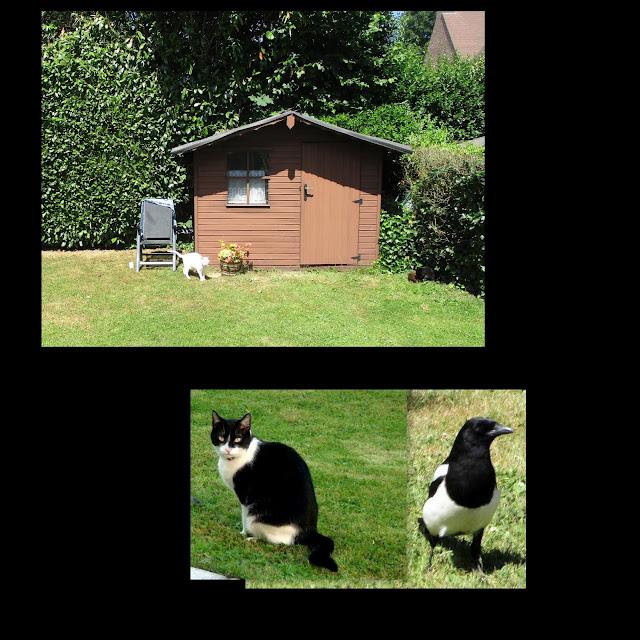 My office is again outside and sometimes when one of the numerous magpies sit in the grass, I think it is Rosie my cat, when I just have a quick glance. Of course when it flies away I realize that it couldn't be Rosie ! 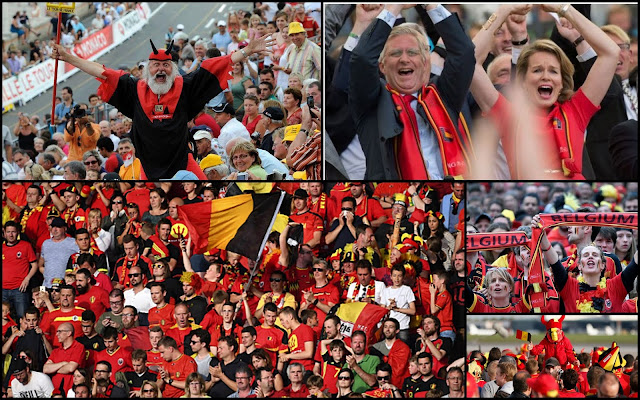 Even the King and Queen of Belgium couldn't resist the excitement !Nobody had never seen them like that, just like ordinary people !(picture top right)

Besides that whole Belgium is in football (soccer) fever again, the Red Devils won against the UK, the country went mad. I saw a whole school class disguised in devils, and finally dear Trump was right when he said that Brussels is a "hell hole" For the moment it's true for whole Belgium !! 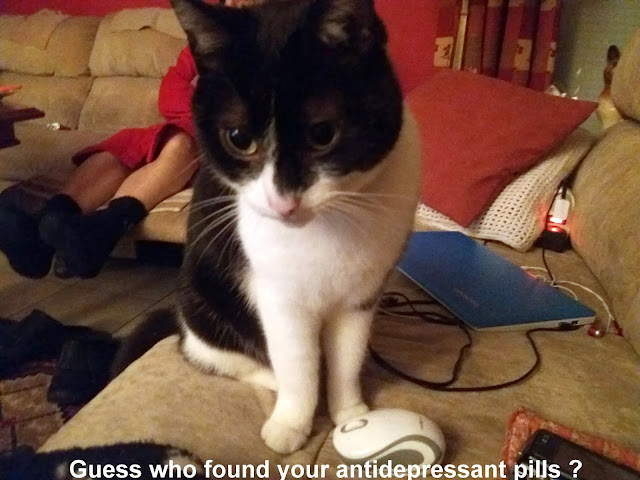 1. Security or freedom? Can you have both? Explain.

That's not even a question for me. Of course I can have both, I had it my whole life since I was lucky and was not born before WWII but just at the end. Ever since we live in freedom, at least in the European Union. Security is not guaranteed, as we have now to deal with terrorists wherever you are !

2. If you could visit any historical American site what would it be? Why?

A historical site ? When I was for the first time in the States in 1971 we also visited Mount Rushmore. Just behind we could see the beginning of The Crazy Horse Memorial construction and it looked like the photo below. I wanted to come back and see it finished. When I googled for a picture to my surprise I found one which looked like as I had seen the monument only it is a picture of 1993 ! 22 years later ! 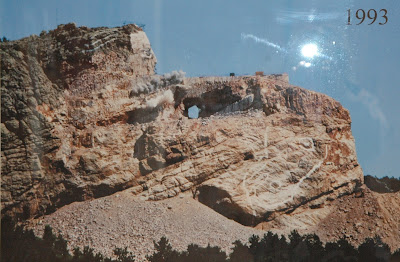 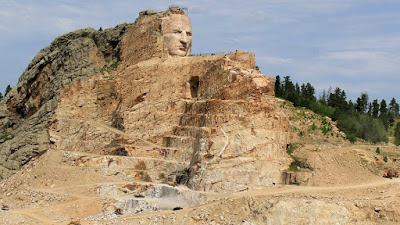 As it was started in 1948 and is still not finished which makes almost 70 years, I think I will never see it really finished. Sad.

3. Free as a bird, free reign, be free of, free enterprise, free trip, walk away scot free, free for all...which 'free' phrase can best be applied to your life in recent days or weeks? Explain.

I always needed to be free even as a child. I do what I want as long as it doesn't disturb my family or friends.  I have always tried to make compromises to keep my freedom.

In my fridge is a red beer can ! My kitchen furniture is white, and just besides me is the blue cat scratch tower squatted by cat Arthur ! 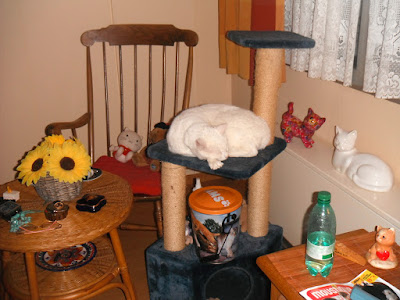 5. July 27th is National New Jersey Day. Have you ever visited The Garden State? If so where did you go? Are there diners where you live? Have you tried Taylor Pork Roll? Do you like to play Monopoly? Salt water taffy-yay or nay? How do you feel about shopping at the mall? Springsteen, Sinatra, or Bon Jovi-you have to pick one.

Raise your hand if you know why these add-on questions are appropriate on National NJ Day.

I think I crossed New Jersey,  I haven't been nowhere I remember. Of course we have a lot of diners where I live, the Belgians like the French love sophisticated food and a dinner can easily last for 4 hours or more ! I never tried a Taylor Pork roll I even never heard of it, but I like to play Monopoly and put people into prison. I don't like shopping at all, only when I need something and the shopping mall is good for walking when it rains ! No songs come into my mind of these 3 singers.

As usual I try to make a plan for today only to discover in the evening that I have done a lot of things or not at all but nothing what I had planned, like have my car washed.

The town De Panne is one of the most popular beach resorts in Belgium primarily because of its beach which is the widest in the country and covered in white sand. The town is of great importance in Belgian history as it is here that the first King of Belgium, King Leopold I first set foot in the territory in 1831. It was also the dunes between here and Dunkirk that were the scenes for the evacuation of British troops in WW2 that proved vitally important. Both of these events are honoured in the town with a monument for King Leopold and an interesting World War 2 Museum.

When I returned home from the Belgian coast, I had a smooth and nice trip without any problems, but on the other side from Brussels to the coast the highway was packed ! Everybody wanted to go to the coast. Unfortunately at the entrance of Brussels there was a terrible traffic jam, but my clever Madame GPS directed me through little streets and I suddenly I was on the main street leading to Waterloo. Don't ask me which way I took, I have no idea, but I arrived in time ! What a wonderful invention.

The whole town or country was in football (soccer) fever and even if you weren't interested at all in football you couldn't escape ! The shops, the streets, the cars and the people were all decorated in yellow, black and red and I have never seen so many flags hanging at the windows and all that for the Belgian football team "Les Diables Rouges".

Mr. G. was angry because normally he had the Formular 1 classification, but it had been cancelled on all European channels because of the football game Belgium (The red Devils) against Tunisia ! When they won even a deaf person could hear it.

I was sitting in my car surrounded by honking cars, I quickly drove home, the whole city seemed to be mad. But no incident happened. It was pure joy. 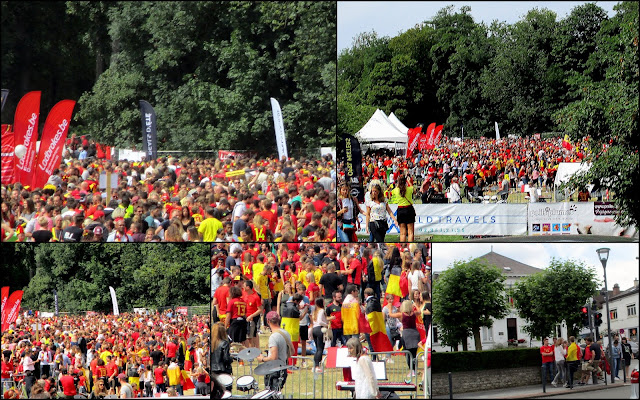 I drove along the Waterloo park where a huge screen had been installed and as you can see the park was full ! 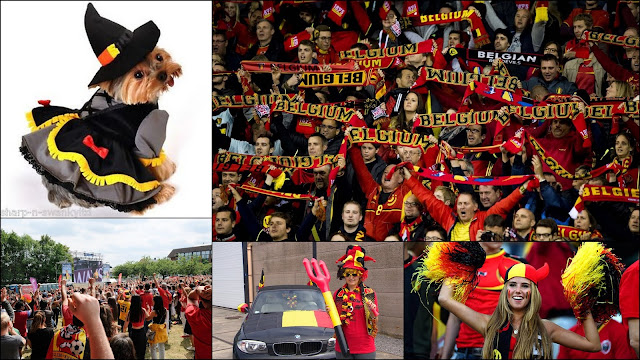 The cars wore horns, and flags, the people were made up as devils and not even babies and dogs could escape this madness ! 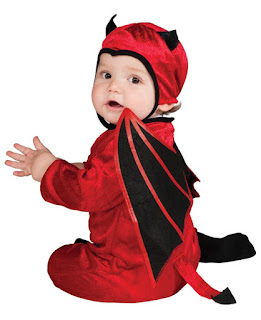 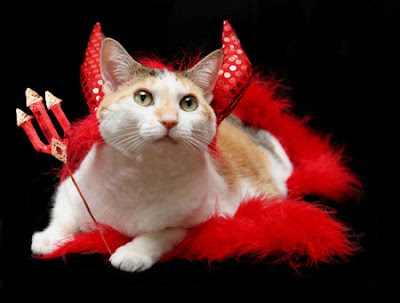 My cats no football fans either, refused to wear a costume, so I found this one on internet !

At home it was peaceful and in our street too, only sometimes during the night I heard some firework.
The only very positive thing about football is, that it brings people together, suddenly there are no Flemish or Waloons anymore only Belgians with the same proud and joy.  For those who didn't know where Belgium is, as it is such a little point on the world map, now they know.

On Sunday it was quite calm probably the people had celebrated with too much beer and had to recover. Even the market was rather empty. I did my little shopping and went home.

The afternoon was calm and quiet with some TV watching and blogging. Am I happy that the blog comments arrive again in my emails ! That's much easier ! 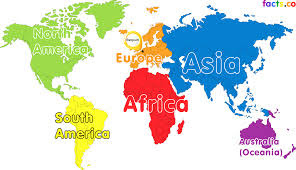