1. I still didn't feel better so I decided to go to my doctor. The only problem was, that the good man after 40 years of taking good care of Waterloo people had retired and I found myself without. He had been the only male doctor I still had, all specialists I had replaced by women !

My neighbor had given me the address of her doctor who fortunately has her cabinet not far from my home, so I called her took an appointment and met her for the first time. I liked her at the first sight and my decision was quickly taken, I would take her. Now she has to ask my files from my "old" doctor which means 40 years of paper ! (He didn't like computers even when they became common) After she had examined me she told me that I am at the end of my miseries and it's not necessary to take other medication as the once I had already swallowed for a whole week. Now, she said it takes time to get fit again, for the time being I feel rather weak !

2. I took another appointment in our medical center for a blood test and went to Dracula's cabinet, where 5 small tubes were filled with my precious blood. Dracula  found me rather brave, he said that mostly men would faint when their blood is taken, that's why they are called "strong" men.

Now I have to wait for the results.

3. Running now on 90 % of my usual body capacity, I was glad that I could go to the theatre play which Dominique had booked for us already some time ago. 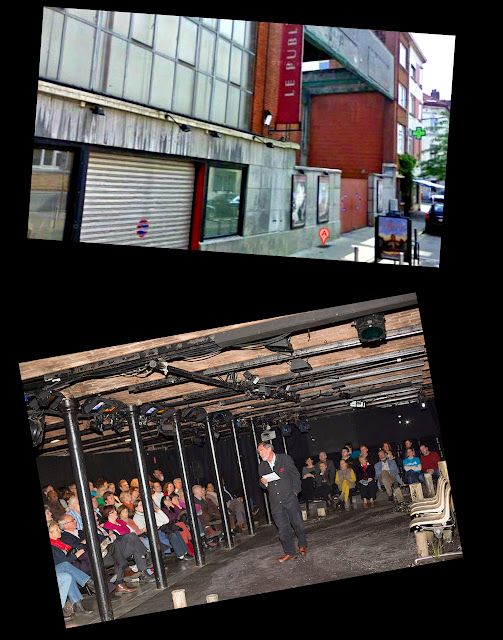 The theater was an old brewery which had been transformed into a restaurant, bar and theater. To get there is quite funny, you have to go into a parking and from there, there are shuttles taking the spectators to the theatre, as there is no parking space at all in this street.

The stage is somewhere in the basements, low ceilings and metal tubes above your head. The room is not heated so we all got red fleece blankets in which we wrapped ourselves and felt nice and warm and looked uniform ! 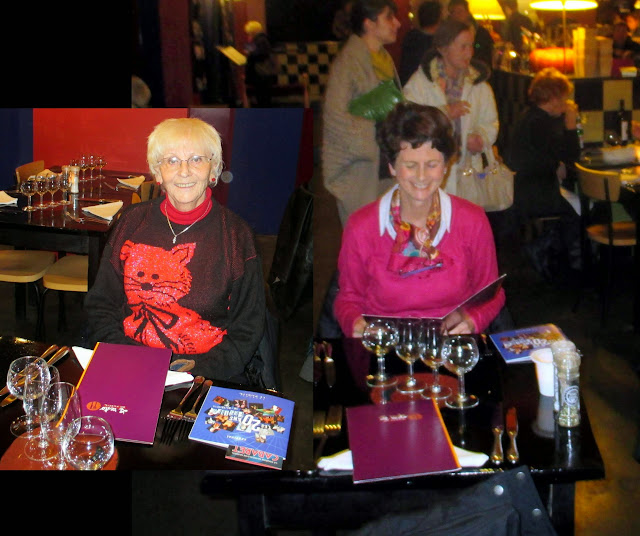 Dominique and I choosing our meal 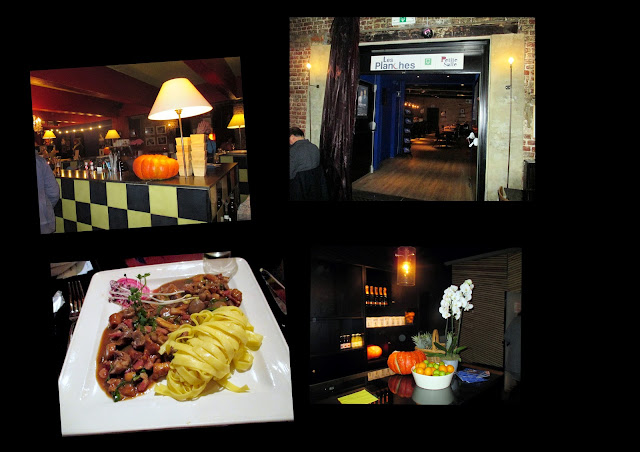 The restaurant was very nice and we had a wonderful meal, grilled kidneys with chanterelles, before we watched the play. 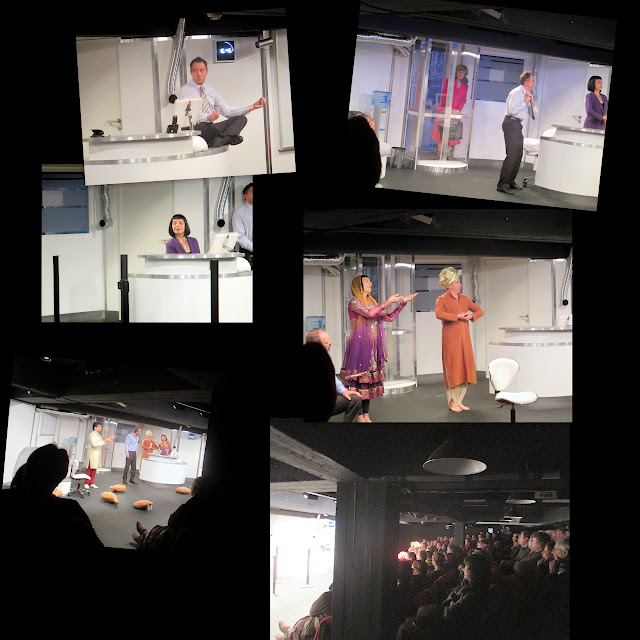 The play was making fun of the banks and the money they try to get from their customers. The bank was a French one, which had been taken over by an Indian bank and were now under Indian laws. The old lady who wanted to take some cash was stuck in the turning glass door because the bank opened only at 9 am but not French time but Bombay time ! When the Indian bank manager appeared the employees had to dress in Indian clothes. It was hilarious. We spent an excellent evening ! 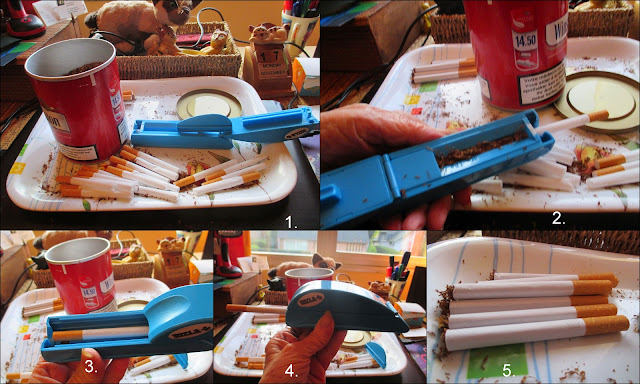 Mr. G. who would rather die then give up smoking bought himself a cigarette making machine !That makes a huge price difference ! As loving wife instead of ironing his shirts I spent an hour rolling cigarettes ! It's really easy ! You put the tobacco inside the little machine, and the empty cigarette at the end, push the whole thing together and it's done. Don't think now that I do this to become a widow earlier as smoking is bad for the health, which I know, so useless to remind me,  I did this only exceptionally, because I think during the time it takes him to make a cigarette he has no time to smoke !

Normally Blogger filters spammers like policemen at the airport filter terrorists ! So I was quite surprised to find a comment from a Mr. Anonymous who had slipped through the control, although anonymous comments are not allowed on my blog. Never mind it happened and as Mr. Anonymous wants to express his feelings on my blog I thought I will give him this pleasure and publish them officially in a post !

I am an American man, and I have decided to boycott American women. In a nutshell, American women are the most likely to cheat on you, to divorce you, to get fat, to steal half of your money in the divorce courts, don’t know how to cook or clean, don’t want to have children, etc. Therefore, what intelligent (???) man would want to get involved with American women?

American women are generally immature, selfish, extremely arrogant and self-centered, mentally unstable, irresponsible, and highly unchaste. The behavior of most American women is utterly disgusting, to say the least.

This heartbreaking confession made me ... a normal European woman burst out in laughter ! The poor "intelligent" man ! If he only would know ! Apparently he had never met an European woman ! Which modern woman wants to clean, repair his socks, and cook his meals ? Usually they are all working, stay at home mums are rather seldom, and they certainly don't need a men's money ! They also don't marry only to divorce ! Most of the men are anyway convinced that women are mentally unstable (Mr. G. is the best example when it comes to me ! ) Highly unchaste ? If he is not able to keep a woman's love then it's certainly not her fault.

Has anybody a good address to send him to a psychiatrist ? He must have been the victim of a mother who left him with his father when he was a child and had to listen to his father's outbursts about American women, as obviously he had never met a European one !

We are all sisters in our Western world my dear Mr. Anonymous ! 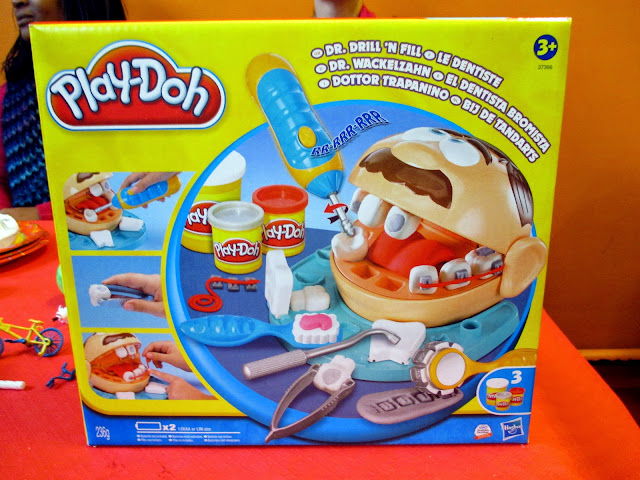 My grandson got this Dentist play set for his 4th birthday ! I shiver !

MY WORLD - AUTUMN ARRIVES WITH A COLD

Since I hadn't put my nose out because of my cold, nature had changed !

I had to go to the doctor today because I was still not feeling well.

Our doctor whom I knew since 1975 had finally stopped working and enjoyed his retirement. My neighbor's daughter gave me the address of her doctor who is a woman, and that's what I wanted.

She has her cabinet just on the other side of the avenue, only 10 min far by car. 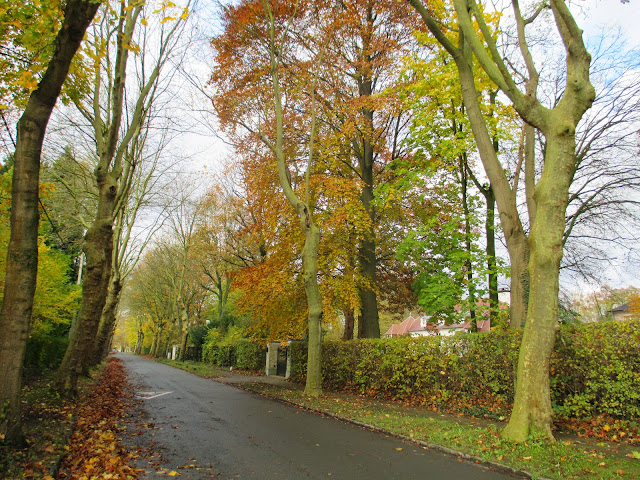 There were lots of trees near her house, some of them still surprisingly green, considering that we are going to end of November.

But leaves are falling and there were two men with a huge blowing machine  who  first blow them all aside and then vacuumed them off. 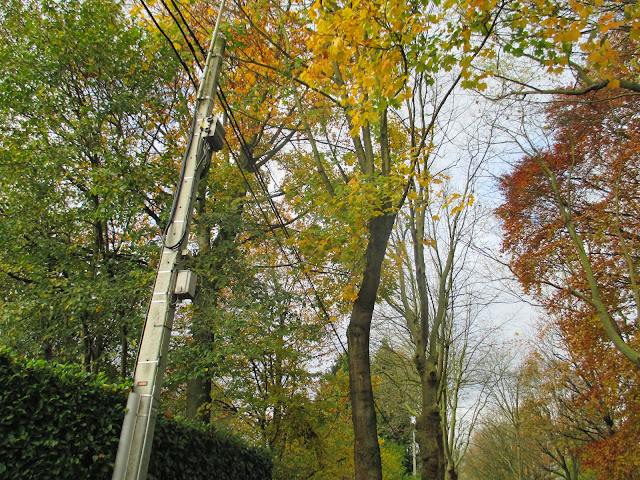 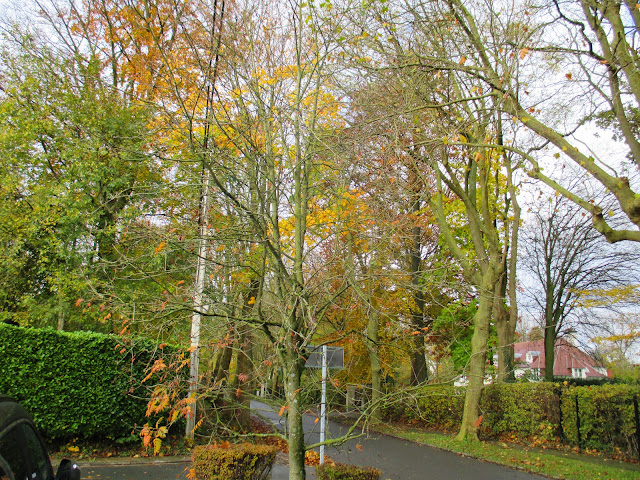 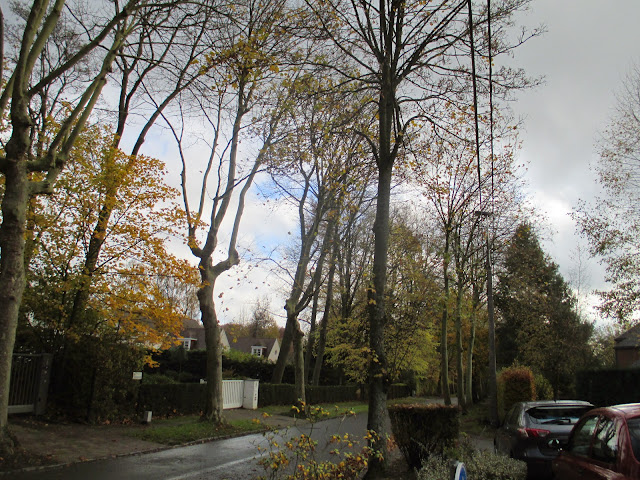 Very soon there will be no leaves left in this street. 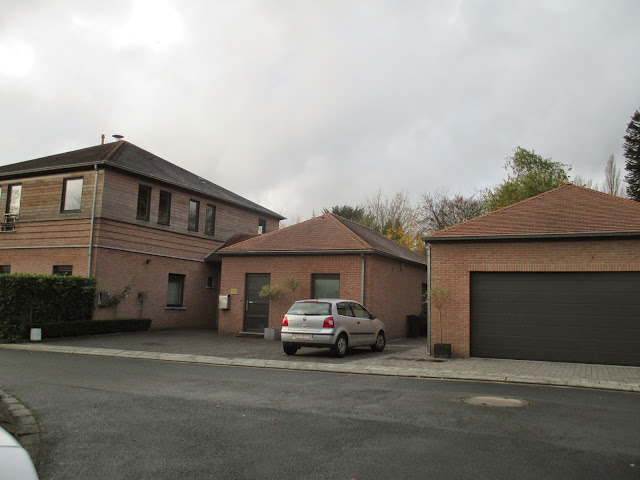 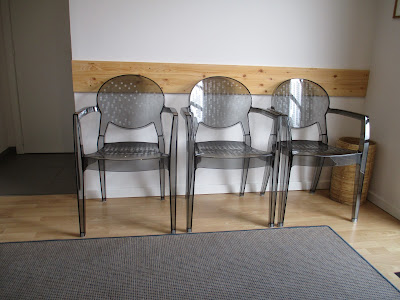 and was the first one in the waiting room, unfortunately with grey furniture, but it didn't look too bad.

I didn't have to wait for a long time and was pleased to discover a nice young woman plenty of humor but very seriously in her work. She checked me from top to bottom and tomorrow I have to do a blood test.

MY WEEKEND OF NOVEMBER 15

It is seldom that I catch a cold or a flew, but this time I got it with all accessories, and I feel as if I can't live or die, which of course makes me very grumpy !

If somebody calls to ask me how I feel and wishes me all the best, it is mostly in the moments when I for once am fast asleep ! When nobody calls it's not good either I feel forgotten and think that nobody loves me. In short, I am unbearable ! 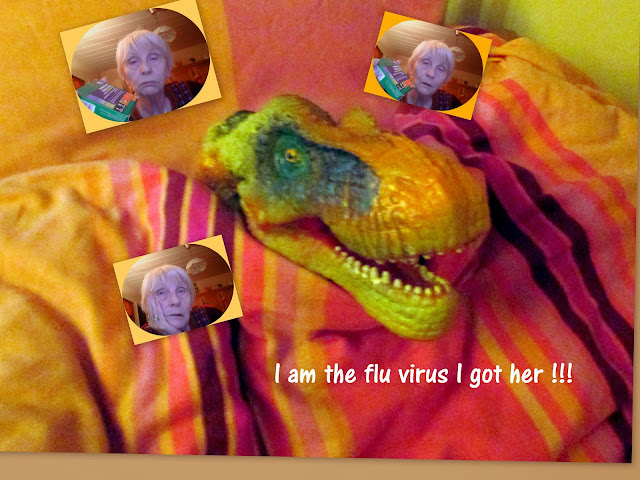 and that's all his fault !

Please forgive me if I mix up comments and find a flower beautiful and the picture represents a horse !!


*******
Today on November 17,  is our grandson's 4th birthday ! Years fly by so quickly. We celebrated this event  last weekend here in Waterloo, this weekend he celebrated with his Dutch family. Anyway even if we would have had to go there it would have been impossible. 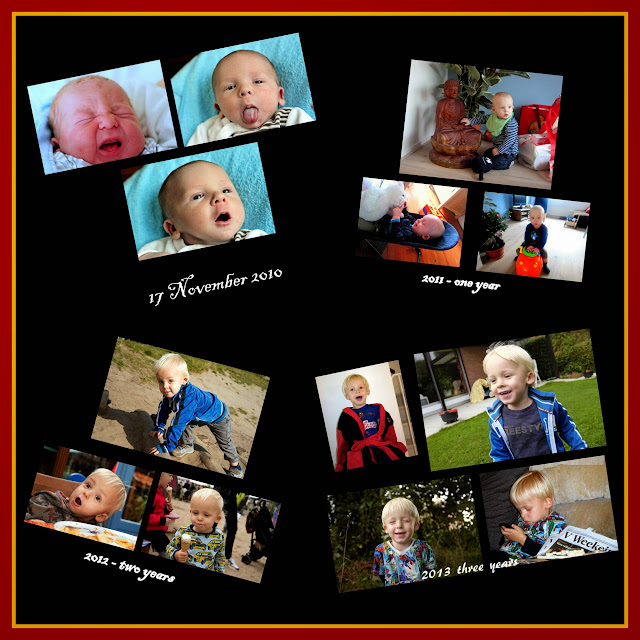 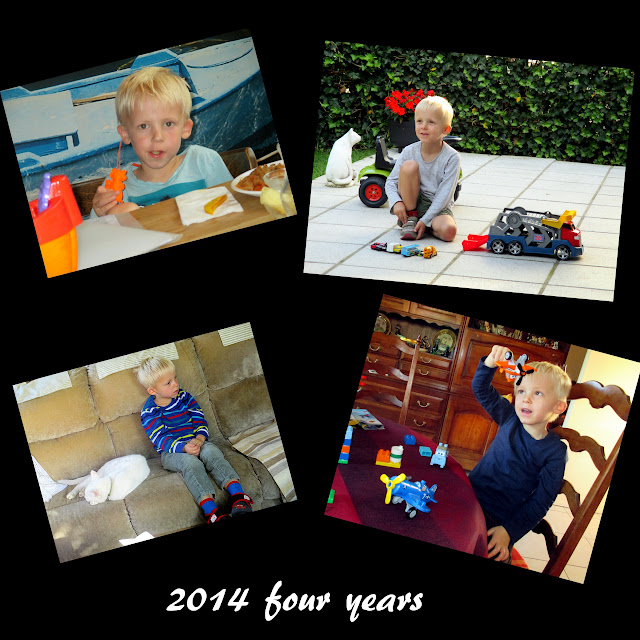 and now he became a little boy ! He will leave the creche and go to school from today on ! What a big step in his life !