1. The sunny weather continued so in the afternoon, I cleaned a bit the entrance, my cat Arthur loves to dig in the bark for his personal needs and then I have the bark all over the white tiles. 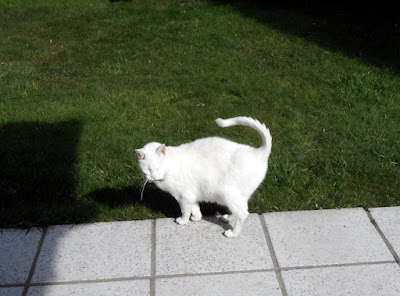 He then was so kind and bring a mouse in the house, to show it to me and play with, I wanted to save the mouse, but unfortunately it didn't work and he disappeared with the mouse in our garden.

2. I had spent the afternoon on Nicole's terrace sunbathing, but well dressed the air was cool and Charlie was happy with his bone I had brought him. 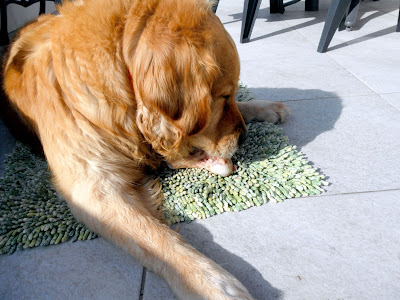 3. When I returned home I heard in the radio that a search was made in the Brussels' municipality Forêt or (Forest in Flemish) I thought that's nothing new they do it all the time, so why make such a fuss now about a search.

When I arrived home Mr. G. watched TV, he wanted to see his usual program but instead he saw policemen with black masks, soldiers, etc it looked like a movie ! We then were informed that when the police wanted to get into the apartment, somebody started to shoot. 4 policemen had some scratches and were taken to hospital, but not for long and one of the occupants of the apartment had been killed. That was the short version ! But unfortunately then the show started on TV, for 3 hours (we changed channel before) they were dramatizing the whole event. They repeated and repeated and each time the event became more colorful and more dramatic.

The world now knows another part of Brussels, not Molenbeek anymore but now also Forest. I thought if I only would listen or watch TV I would think that whole Brussels is in terrorist war ! It really looked so dangerous.

My cleaning lady who lives there, told me another story. Of course she had heard the police arriving, people going on the street to see what happened, they all chatted about the event, finally taking place life and not in the movies. But that was it. Of course the TV interviewed only people who were afraid. It's unbelievable, a simple story which probably would have taken two lines in the Newspapers is blown up by the press like a balloon,  as they thought it was related to the Paris attacks, they of course had to dramatize ! Business is business. Happy things are too boring and the quote of TV watchers would drop !

4. Our dear Oscar the lawn mower robot needed a check up, meanwhile it is already 3 years old. The shop where I had bought it doesn't exist anymore but I found one near Ilona's. We went to the shop and  afterwards we had coffee and discussed about making a trip together around the UK and Ireland.

5. In our painting class we made  quite some fun about the dramatized events in Forest, everybody complained about the TV report exaggeration and that all had changed to other channels or just switched off the TV. As there are still two men on the run, we thought about checking the retirement home where we have our class, if eventual they are not hiding in some old lady's room. 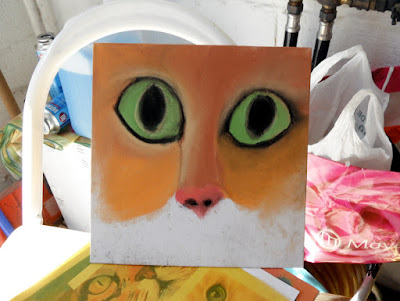 I started a new painting and in the afternoon I drove my neighbor to the hospital for her monthly eye shot. 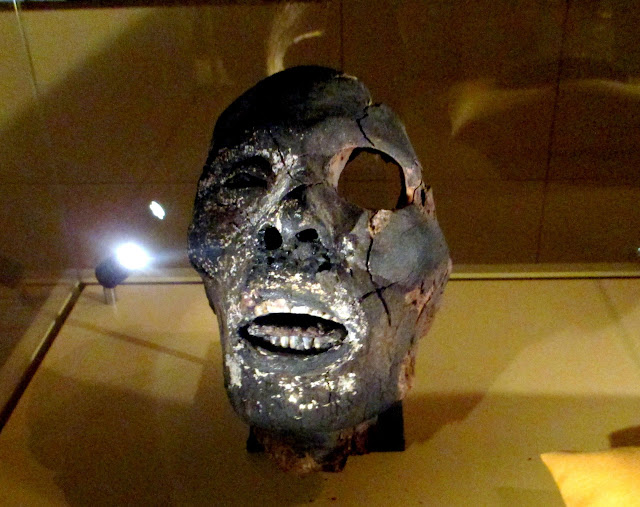 FIELDS NOT FOR LONG ANYMORE

When we moved from Brussels to Waterloo in 1975 it was to escape the busy city and live in a small town, without even a supermarket. It was surrounded by farms and fields.

After 30 years of peace, at least in our corner, the city expanded and expanded and has now become a town with all stores, supermarkets, boutiques and shops the same you find in Brussels.  The fields started to be decorated with houses, the farms were sold and we have got the impression that everybody wants to live in Waterloo.

Driving home I discovered that in our area other fields have probably being sold to promoters and they prepare already the prolongation of a street called "Drève de 10 mètres" which means a way of 10 m, it certainly has to change the street name ! 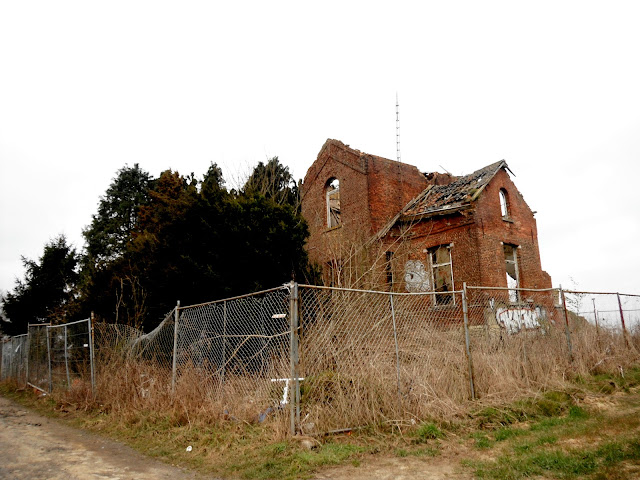 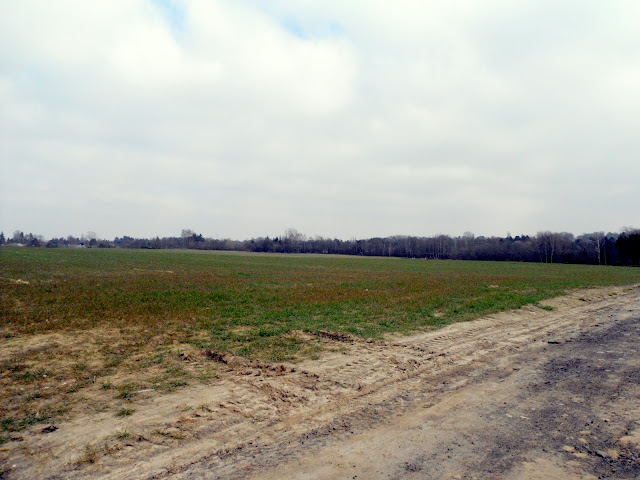 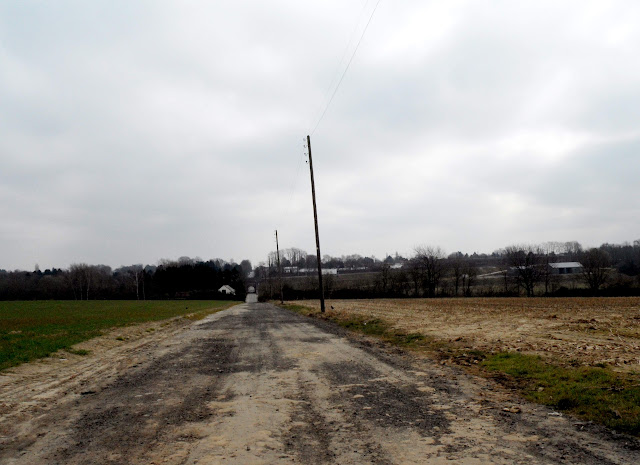 the country lanes will soon become streets for cars 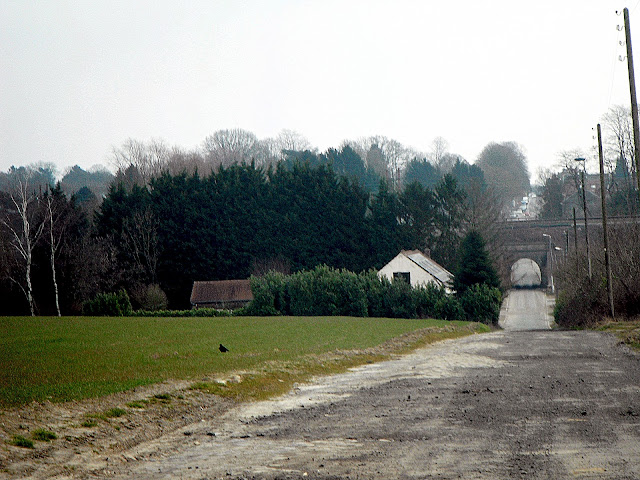 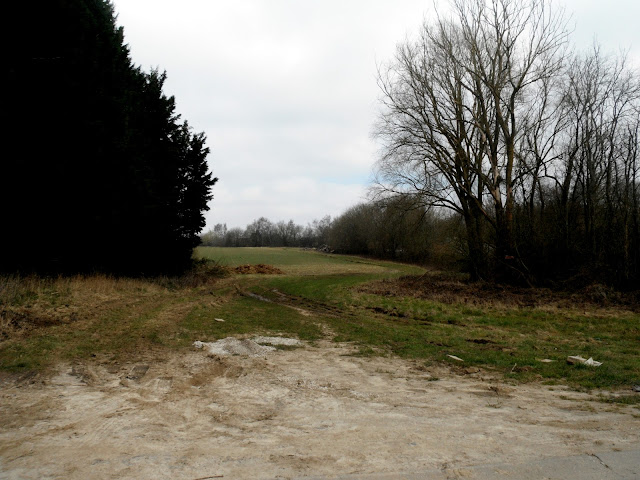 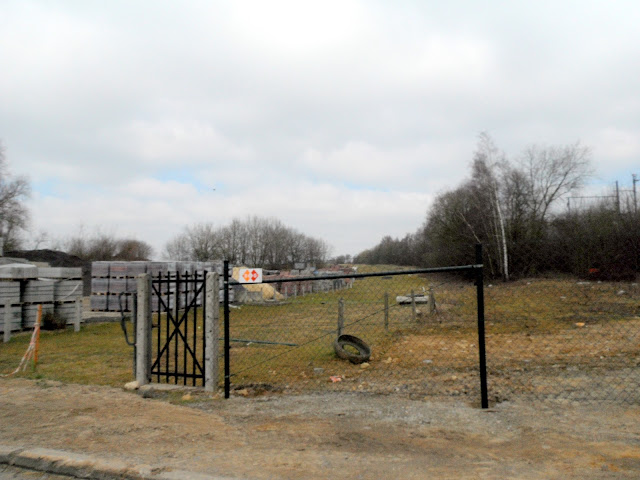 but not for long 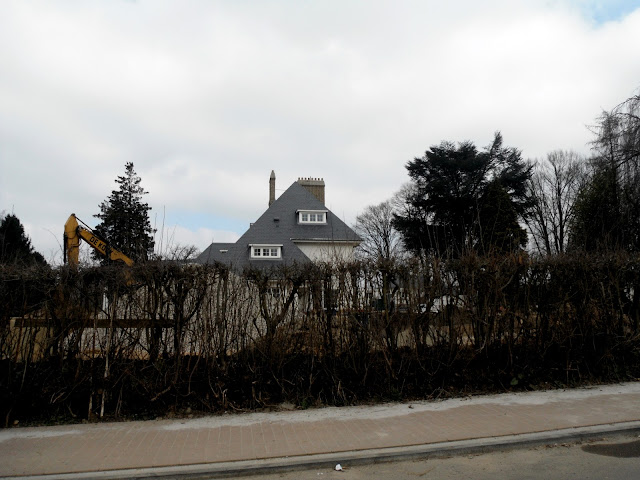 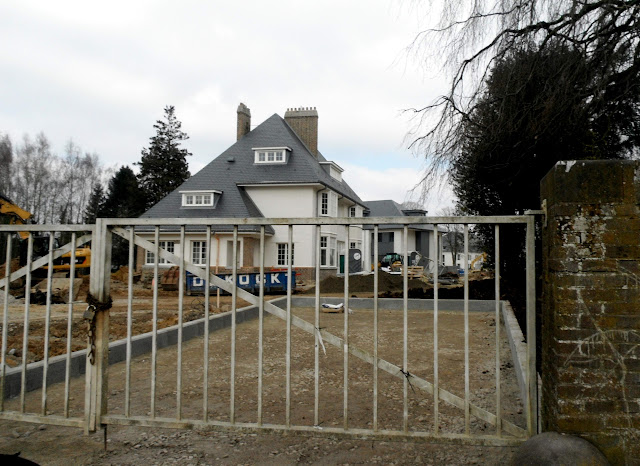 and at the end of my way I discovered this big house, which seemed to me had grown like  a mushroom. I had never noticed it before, normal it is brand new.

Since the weekend started I live in two countries ! In the morning I wake up in Siberia, sometimes even with a little snow, and in the afternoon I am in Africa and can sit on a terrace ! The world has changed around me, restaurants and cafés have put their tables outside, and people are enjoying the long expected first spring days.

The only thing which bothers me about spring is that garden work starts and I hate it, I really have no green thumb. But still I thought I have to have a check up on Oscar our lawn mower robot, and brought it to the shop. Which had closed and there was a beauty saloon instead, which of course refused to make up my Oscar. Now I have to find another store nearby who will take care of it.

Late afternoon I went to a theatre play in the City hall together with my neighbor  Vivi, organized for the seniors. It was very funny and played in the Brussels' dialect which is very special and to French speaking people hilarious. There are still some people in Brussels who speak this language and for a long time France had thought we all would speak this funny French and made fun of the Belgians. They were very disappointed when they came and everybody spoke normal French. The play was longer as usual and I got nervous because at 8.30 pm I had another play with my season ticket together with Nicole.

I just made it and we arrived in time ! Unfortunately we didn't have supper as usual, but fortunately I wasn't hungry neither. This play was a British one from a British author translated into French. The humour was the typical British one and I found the play very good and funny. Nicole almost fell asleep and the man besides me snored peacefully during nearly the whole play.

It was late and we returned home and I just fell in my bed. I still wasn't hungry ! I did a theater diet which is not yet known.

On Sunday a group of young teenage boys rang at the door and collected food for the poor and refuges from Syria we have to deal with.  I gave them all I had as can food rice and noodles and told them how nice it was of them to spent a sunny Sunday morning with collecting food. 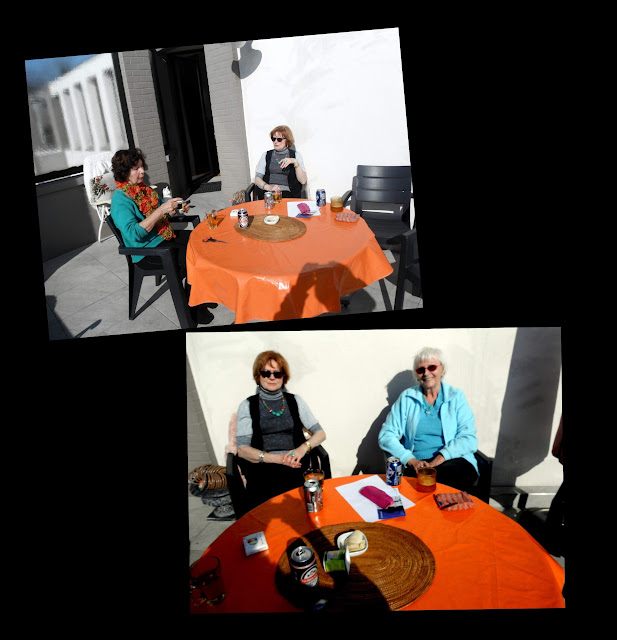 Nicole had suggested to Ilona and me to spend the afternoon on her terrace. It was unbelievable, outside on the street there were 10°C and I and Ilona arrived in our winter coats, but on the terrace we had to take off layer after layer because it was so warm. That was the first time this year that we could sit outside and have a beer, then ice cream and then tea ! It was like a holiday afternoon and we had a lot of fun. 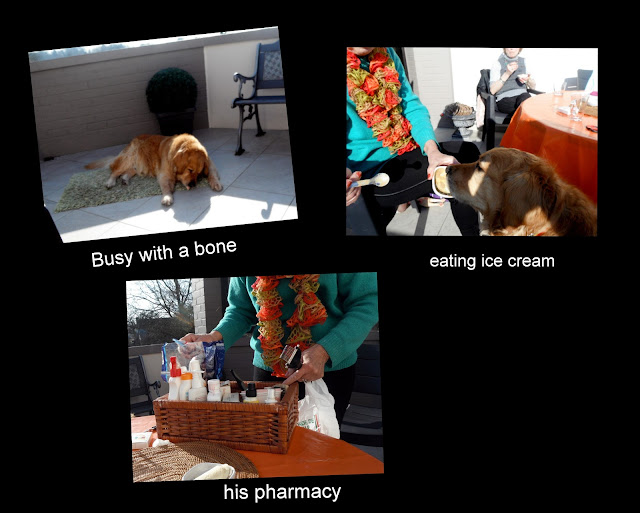 Of course Charlie was the star and spoilt by 3 girls ! I had brought him a bone, then he had a bowl of ice cream and then Nicole brought his personal pharmacy with comb and brushes because we had noticed that he lost a lot of hairs. 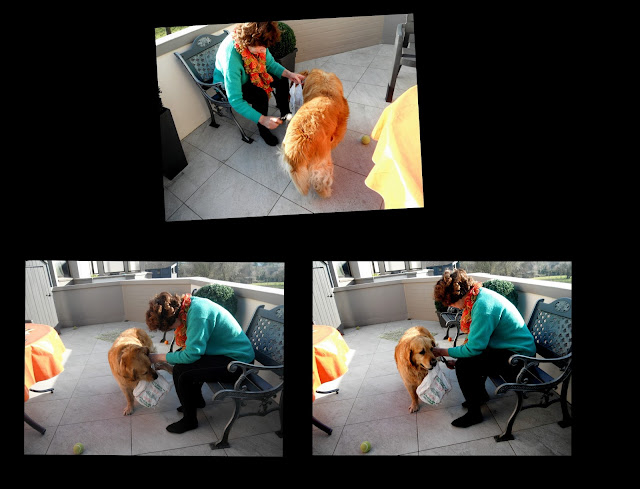 Nicole combed and brushed him and Ilona and I comforted him, because sometimes he was protesting.

What a nice afternoon, we decided to repeat this and profit from the early spring weather to a maximum.
Posted by Gattina at 06:30 7 comments: