1. I started the week by cleaning the guestroom because my friend Claudie from the South of France would arrive the next day to stay with us for 5 days. Then I went shopping and filled in the fridge so that  she wouldn't starve.

2. To discuss practical things for our trip to the Lake Geneva I went with Nicole to Dominique and we discussed what to take along, and we also inspected her trunk (booth) to decide if we would take suitcases or rather backpacks.We had a lot of fun with making plans.

3. Poor Claudie arrived late evening after 9 pm, her train was nearly 2 h late and she missed her correspondence to Brussels. The poor girl arrived rather tired after having spent almost 12 h mostly in the stations ! The normal travel time is about 5 h !

4. As at half past 11the next morning she was still sleeping, I finally went into her room ! She wasn't sleeping anymore but thought it was too early to get up, the alarm clock on the bedside table showed a quarter past 8 ! I had completely forgotten the alarm clock and it was set 2 h behind ! The day started with a lot of laughter.

The weather was wonderful and we had our lunch in the garden. 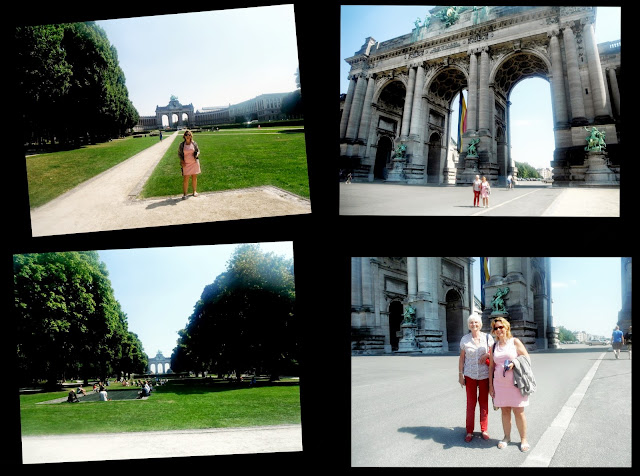 Then I took her to the Cinquantenaire park. King Leopold II created the park to celebrate the 50th anniversary of the independence of Belgium in 1880. The park covers 30 hectares (74 acres) of classic gardens with hedges of laurels and a symmetric plan. The museums of Art and History (Cinquantenaire Museum), Aviation, the Army and Military History and Autoworld are situated here.

We didn't go into the museums but rather walked through this beautiful park and had a look on the European institution buildings which start from there. 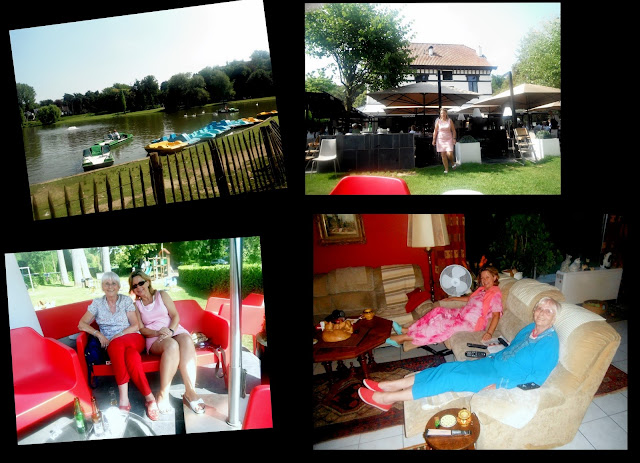 On the way back I showed Claudie where I had lived with my parents, the church I married and our first apartment. Then we went to the nearby located park, where we had walked our baby boy, fed the swans and geese  before we moved to Waterloo. The old Brasserie was still there and we sat there and enjoyed the sunshine. Unfortunately the Brasserie had been modernized and was all in modern black and white furniture inside, which really looked awful and didn't fit at all with the untouched old outside of the building. Then we drove home put on our kaftans and had supper outside, Mr. G. was in his best shape and served us better then a waiter ! The day ended with a little movie on TV. 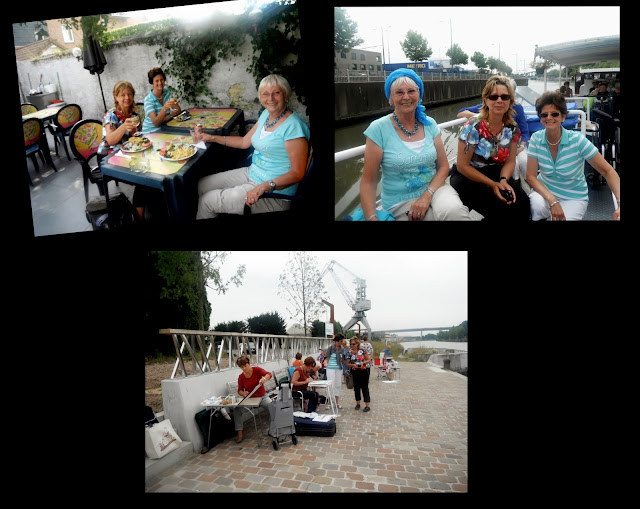 For our next excursion Dominique joined us and we first went to our little Greek restaurant and had a very good meal ! Then I drove them to the other end of Brussels, where we took the Waterbus (I wrote about it here) and started our cruise on the Canal. The ship was quiet full and at the last stop before the ship turned around to go back we stepped out and visited a group of amateur painters who were sitting there painting the landscape. 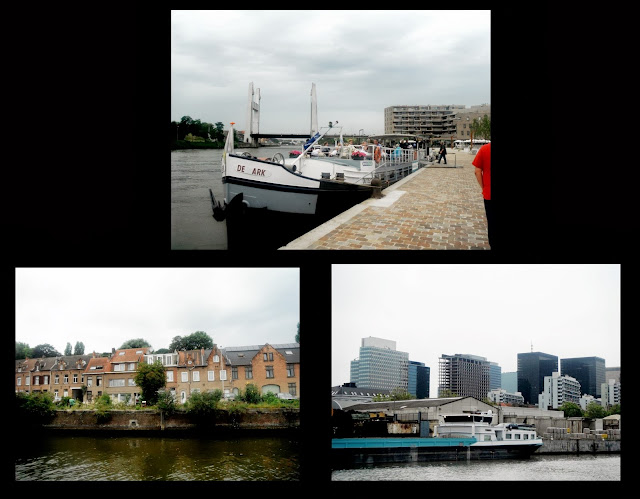 Above you can see our cruise ship and some of the landscapes of Brussels we saw from the water. Our guide told us that  the ugly new buildings are called "little Manhatten". We had a lot of fun on the ship and laughed a lot with two other ladies who told us some of the stories of the new builds where the architect had forgotten the lift in a building of over 15 floors and another one where they had forgotten to connect the building to the canalisation.

At 5 pm the cruise was finished and we returned home, just in time before it started to rain !
Posted by Gattina at 06:00 11 comments:

I am very sorry, but apparently I should revise my alphabet ! After "M" I thought it was "L", don't ask me why ! Must have been like with a car, instead of starting the car I put the reverse gear !

A few time ago  the Belgian Minister of Justice had a very good idea (for once). He asked the population to point out outdated laws rather then asking his employees to go through the law books. For this purpose he had had created a special website where everybody could write what they had found.

It had a huge success and here are a few :

- It is forbidden to call a pig Napoleon (but Emperor Napoleon is dead since more 200 years !)

- Everyone must have a haystack at home if the king would go by with his horse. (Our King drives a car or is driven, therefore everybody should have some petrol at home)

- It is forbidden to die in Parliament, under penalty of arrest.

- Members are not allowed to put on armor in the Parliament (what a pity, some would look very sexy !)

- A woman is not allowed to eat chocolate in public transport !

- It is considered an act of treason placing a stamp with the King's head down ! (Maybe he gets dizzy ?)

- No cow is allowed on the roads between 10:00 am and 7 pm hours unless prior approval of the Police.

- It is forbidden to flush after 22h

-  When you drive a car, you need to have someone in front of your car with a flag to warn carriages with horses.

- It is forbidden to kiss on rails 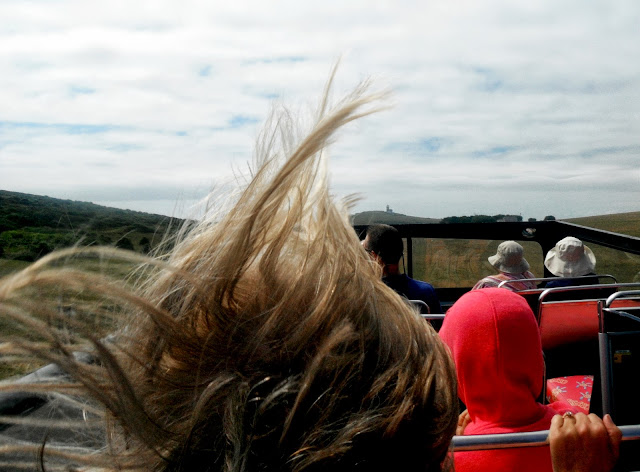 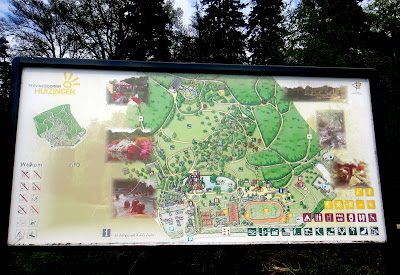 Besides woods, parks and a castle it also houses a big public swimming pool. Not often you have to walk through woods until you finally arrive at a swimming pool. 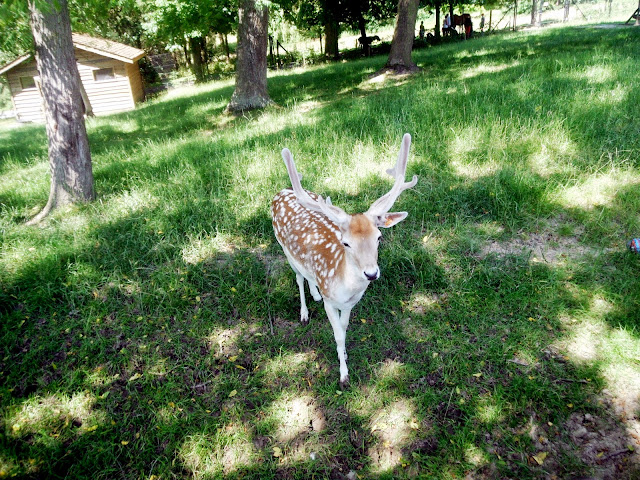 Just at the entrance we were greeted by a little deer, there is a small zoo with all kind of animals which of course children love to see. 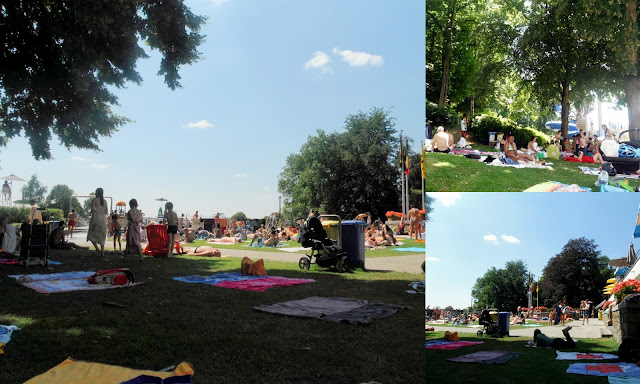 In the middle of the wood is the swimming pool. There is really space for everybody except maybe in the water. We choose a place in the wood overlooking the pool. It was nice and shady there. 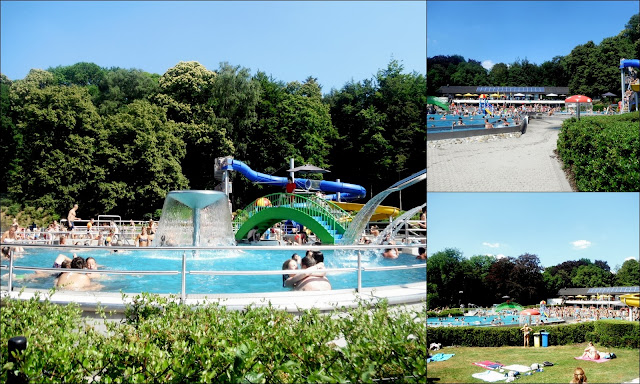 When the weather is warm people from Brussels and surroundings come here and stay for the whole day. Picnics are allowed. 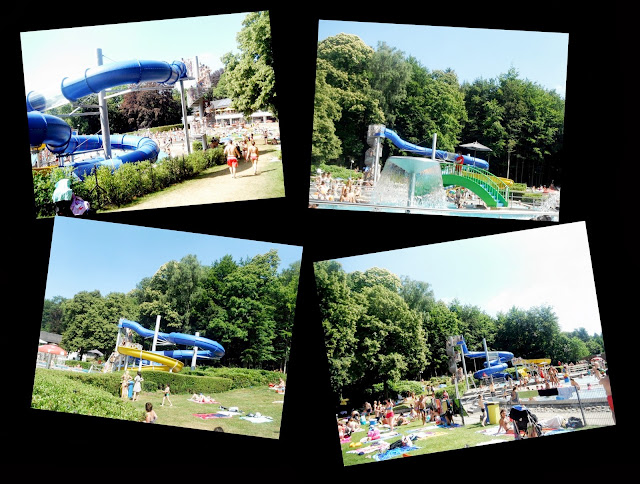 Lots of fun for small children and for adults of course 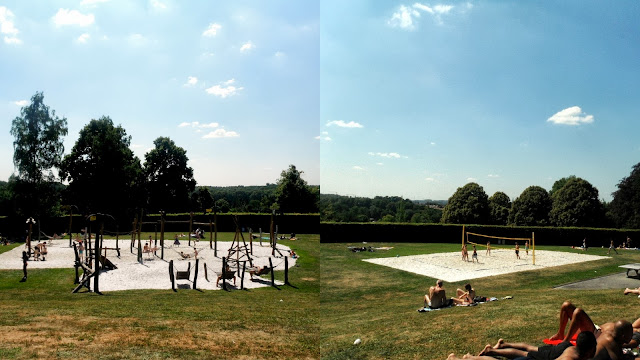 A space for ball games and climbing is also there 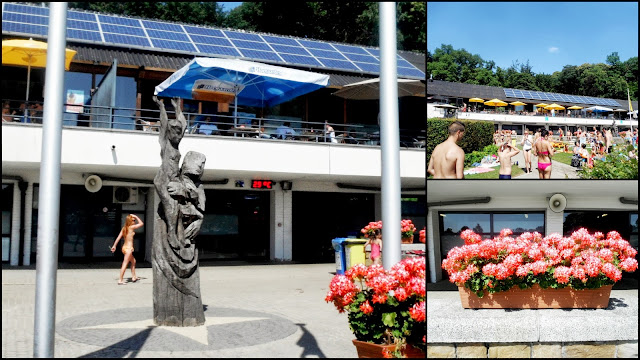 And on the top of the entrance building is a very nice restaurant, where you can eat and drink. Flowers are everywhere and this wooden statue stood just at the entrance.

I didn't swim, too many people in the water, I don't like to get wet in my face and I don't like either that people bump into me. So I watched my friends and took pictures instead, while also watching over our belongings of course. We even met people from Waterloo !

Helps you to remember what you have done on the weekend of August 17 . If you participate please put the little logo on the top of your post and leave your link.

Saturday I woke up full of energy and plans ! I opened the stores and my heart sank ! It was grey and didn't look very inviting to go to Brussels and visit the “Floraliëntime”, a major international plant and flower arrangement event in Brussels City Hall and at Brussels’ Grand Place. 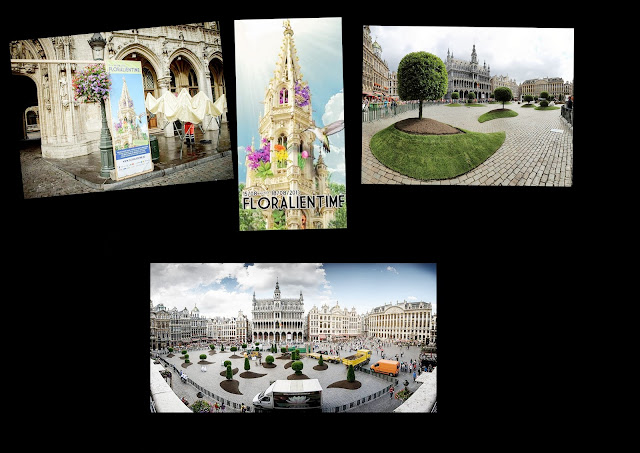 Pictures stolen from the web

Impossible to go there in this rain. I looked at the Webcam of the Grand'Place and saw only a few people walking there with umbrellas. No way to take pictures. I dropped the idea and thought I can go on Sunday.

In the afternoon it cleared up and the sun came out. I went to Nicole, we hadn't seen each other since mid July, as our holidays had crossed, so we had a lot to chat. She had been in Budapest and had loved the city.

We sat on her terrace in the sunshine and Charlie brought me his new toy, a pink rapid.

Sunday morning it was even worse it poured ! 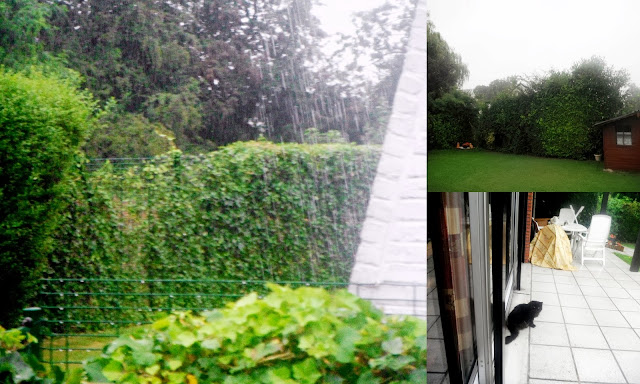 I saw a waterfall coming from Dominique's roof. The cats waited under the pergola in the hope it would stop. But it didn't.

My young neighbor couple had a baby girl 2 month ago, and I hadn't seen her yet. I waited that the rain would stop and crossed the street. They have a little boy 5 months older then my grandson, he proudly showed me his little sister. His mom is also a cat lover and has two cats. They were sitting besides her while she fed the baby. Apparently after some difficulties at the beginning, the cats got used to the presence of a whirling around toddler. He is also very kind to them. We chatted a bit about what is in fashion now to bring up children because lots of things which were not good when I had a little boy are good now, like walking barefoot on a flat surface. I had been told that it would cause flat feet, now they say the opposite.

Of course the little boy promptly fell off the sofa and hit his head against the table, she picked him up, comforted him, took out a box where she keeps "special" sweets against "booboos" only !  Apparently they were very efficient, because after having eaten one, he stopped crying and continued to play with his farm.  I found that a very good idea.

Meanwhile it was 5 pm and the sun had come out, and suddenly from 15°C the temperature raised to 25°, no wonder that people catch colds ! When I came home I had to change my pullover against a T-shirt and could blog on the terrace !

I only hope we will have nice weather when my friend Claudie arrives on Tuesday from the South of France !
Posted by Gattina at 06:00 7 comments: