When I finally found my seat in the Eurostar train I was happy that I had a window seat, although you can't see very much when the train runs at 300 km/h only different shades of green, flying houses and cows.

I made myself comfortable took my baby computer out to play majong and as the train had shrinked since 1994 I only had very little space, just like in an airplane. When it started all wagons were like business class nice and spacious but now to squeeze more people in they had added rows and you feel like a sardine in a can. But the seat besides me was free so I thought I would have enough room for all my little things.

My luck didn't last long when suddenly a big (very big) but still young man tried to get through the aisle to the seat besides me. His face was red from the effort as his colons of legs hit the seats on both sides. He obviously was a business man, dressed in black trousers (what a size !) a white shirt and he only had a brief case. He fell in the seat and suddenly my world became very small and I thought I would been shot to the ceiling, but fortunately the seat was solid and didn't move. The man smiled at me, lifted up the armrest to let hang half of his bottom out on the aisle, sighed and happily closed his eyes.

I adjusted myself to the small place I had now and tried to continue my Majong. Suddenly I felt home. The man had started to snore, he snored so loud that a motor saw was a music box against him. After a while people stood up and looked in my direction to see where this awful noise came from.

Slowly I got more and more angry I couldn't concentrate on my game and really couldn't stand it anymore. So with my ellbow I pushed him a little. Nothing happened, he just gulped some air and snored even louder. I pushed him harder, nothing, finally I shook his voluminous arm, he woke up for a second and stopped but only to continue in another sound.

I thought I would get crazy, but then his mobile rang and he woke up ! What a pleasure ! When he finished his phone call, I wanted to go for little girls, so he lifted up his enormous body groaned from the effort and I could pull myself out of this narrow space.

Suddenly in the toilet I heard that the train would stop now in Ashford where I had to get out. With all this snoring I hadn't even realized that I was already in England and had crossed the channel sitting in the tunnel under hundreds of meters of water.

I pulled up what I had to pull up, stormed out of the toilet, grapped my suitcase and my backbag quickly smiled at my noisy elephant companion who stand there waiting for me and got off the train, just in time ! He probably continued to snore until London.

The rest of my journey went smooth in company of two nice ladies chatting with me and nobody snored ! 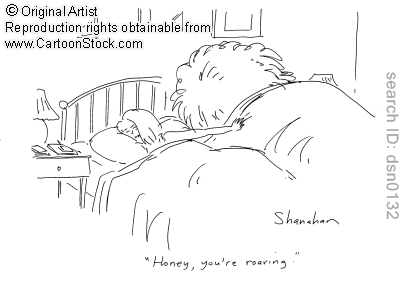 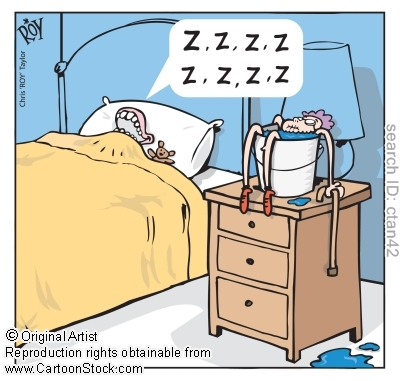 
1. After a wonderful holiday week at the English coast I am back home in the rain again ! Apparently it had rained the whole week I was away. My cats seemed to be very happy to see me again, only Kim the black one hadn't even noticed my absence. 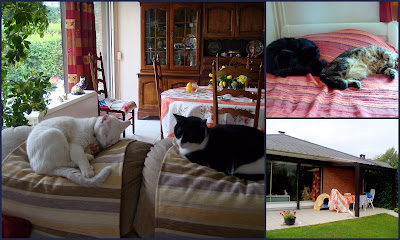 So now I am at home sweet home and nothing had changed. Not even the grass had grown !

2. We have made quiet a lot of excursions to different places in the area. 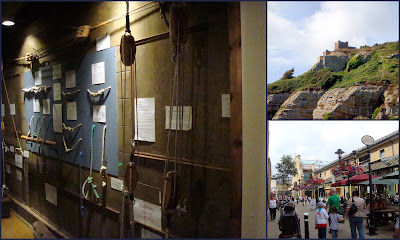 in Hastings we visited the Fisher museum, had a walk through the city and my friend bought some T-shirts. I didn't find anything to buy.

2. On Sunday we discovered the Arundel castle , had a little walk around the lake there and 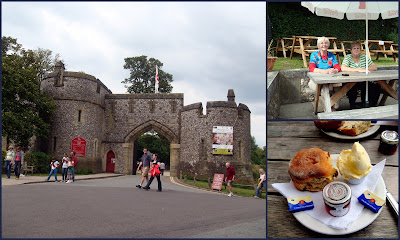 stopped for the traditional tea with scones and clotted cream ! The portion was enormous and delicious !

3. As the weather really seemed to be good the whole day, I went to Eastbourne's beach. 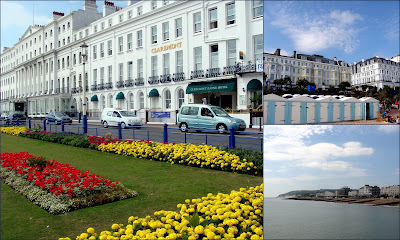 I walked around the pier and sat there for an hour before I had a sandwich at the beach and just did nothing but watching the waves and the people. I even got a little burnt in my face.

4. The last day we met Anne's friends in a Restaurant had a nice meal a lot of laughter and fun and I think we were a very noisy table. Unfortunately we couldn't do our little walk together through Eastbourne, because it was the only day where it rained from morning til evening. Probably the heaven was crying because I had to leave the next day.

5. I left Eastbourne early morning and was in London at 11 am. I left my luggage at the St. Pancras International station, so I could walk around London without my suitcase. 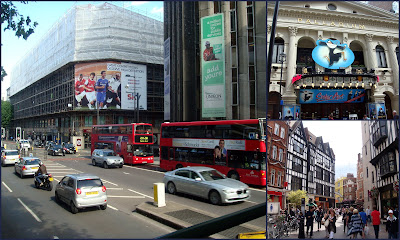 It was nice to see "my" old town again although for the moment it doesn't look very nice because there are construction works and renovations everywhere and no street is without building or street work. It seemed to me like a huge construction site. The city prepares itself for the Olympics in 2012 !
Posted by Gattina at 06:00 16 comments:

2.The traveler is active; he went strenuously in search of people, of adventure, of experience. The tourist is passive; he expects interesting things to happen to him. He goes "sight-seeing."

3.The camera makes everyone a tourist in other people's reality, and eventually in one's own.

4.The vagabond, when rich, is called a tourist

5.The worst thing about being a tourist is having other tourists recognize you as a tourist.

7.In the past, it was only in science fiction novels that you could read about ordinary people being able to go to space... But the foundation for space tourism is now laid.

8.Tourism, human circulation considered as consumption is fundamentally nothing more than the leisure of going to see what has become banal.

10. A tourist never looks like he looks at home, he saves on clothing

11. A tourist always has at least a camera

12. Tourists are a special race, you recognize them everywhere 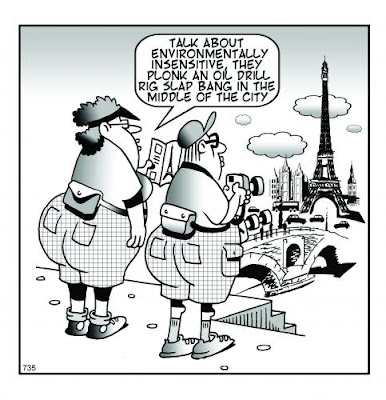 I came back home yesterday night after a nice day in London as a tourist !
Posted by Gattina at 06:00 8 comments: 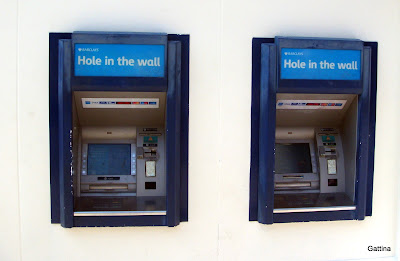 today is here, a Sistine Chapel in Goring-by-Sea in the South of the UK wonderful ceiling painting of a Catholic church.
Posted by Gattina at 06:00

A VISIT TO HASTINGS

Yesterday morning when I woke up it was all grey and it rained and so was my mood except that it didn't rain in my brain. But nevertheless we decided to go out somewhere and not sitting at home watching TV.

We went to Hastings (famous for the "Battle of Hastings") and which had been for centuries, an important fishing port although much reduced, it has the largest beach-based fishing fleet in England. Today it is also a nice seaside resort and the city is lovely. 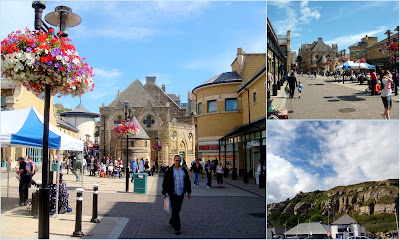 We walked through the city and my friend bought some clothes, I didn't find anything and anyway I have to watch my suitcase ! 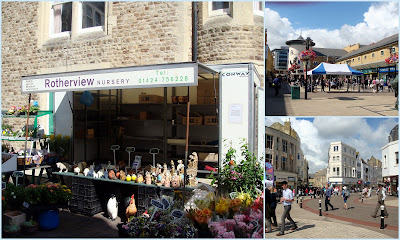 I had been here already, but it is always nice to see it again. 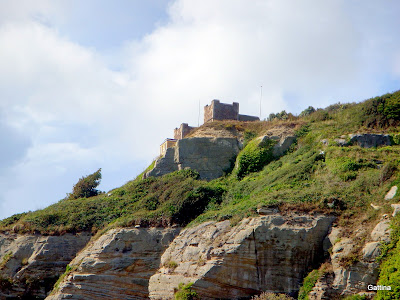 Just on the rocks over the sea sits this old castle. You can go up there with a lift. 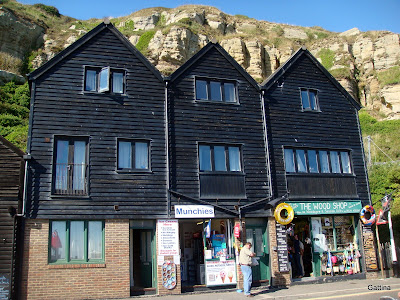 These were old fisher houses, now shops where we bought a very nice ice cream and ate it while looking over the blue sea. 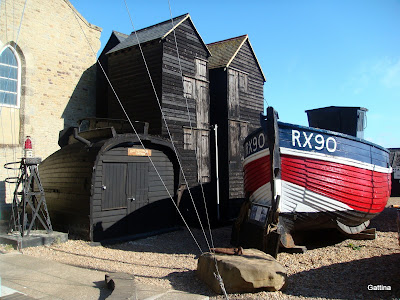 These wooden houses were quiet high and used to hang up the fishermen's nets, so that they could dry. The little house besides the boat was one of where they lived. 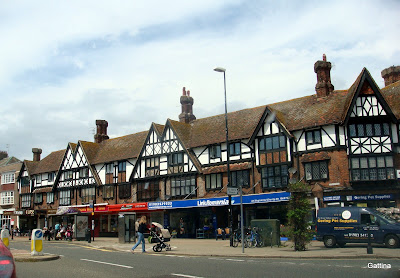 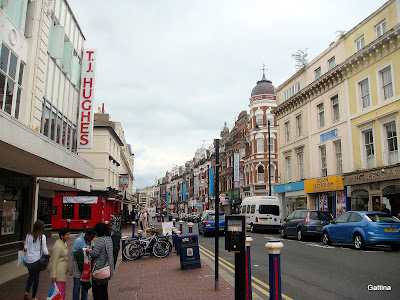 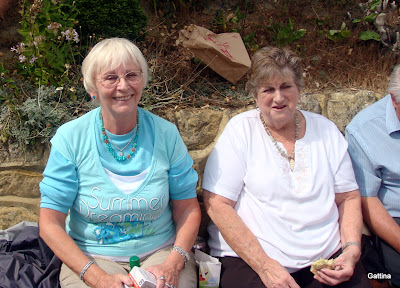 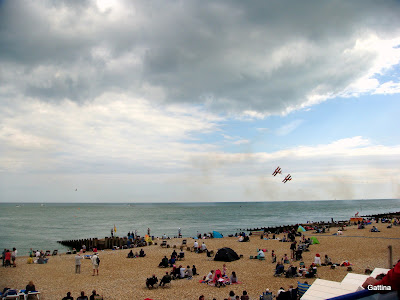 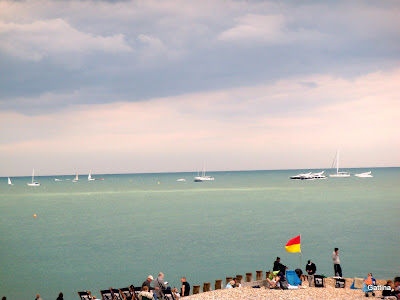 There were boats watching the airplanes from the sea 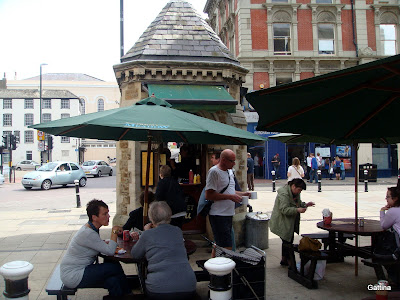 We also went to Hastings for a walk and had a Burger there which was very good. 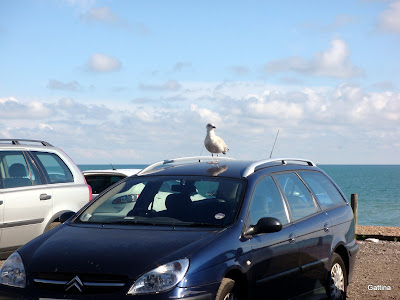 and sat at the beach looking over the blue sea and I was watching the seagulls.
Posted by Gattina at 06:00 5 comments: