IN CONCERT WITH ABBA - Maxine

Last Sunday I went to a concert of "Abba the Show" ! I didn't even know exactly what to expect, but I love the songs and so I went with my friend Ilona. The concert hall has 7000 seats and as we were turning around to find a parking space I thought, that all 7000 bottoms for the seats were turning too.

Finally I found a space between two garages and Ilona had to get out to direct me in so that I wouldn't block the garage owner if ever he wanted to go out at 8.30 in a cold and rainy night.

When we finally were seated, I looked around and it was crazy, the hall was full ! I had never expected that. Besides me was an elderly lady, at least she looked like one, but during the show I discovered that she behaved like a hysterical teenager fan, because she waved her arms in all directions and hit almost my glasses from my nose. I got her ellbow twice at my head, but I thought that it is part of the fun and finally it's rather nice that she fell back into her teens.

Indeed the show was great. There was the London Symphony Orchestra playing and the guitarist and trumpeter were still from the original group. Of course they got a terrible applause and the full audience went mad when they played a solo ! Especially my neighbour who stood up and jumped around like a kangaroo in love, although I have never seen one.

I took pictures, the quality is not that good, but still it's a nice souvenir. When they sang Waterloo, suddenly Belgian flags were waved and there the audience really went beserk ! I stood up too and hold my camera high up to film the whole thing, and was quiet happy with the result. The only trouble is I can't show the video to you, because it landed (for an unknown reason) in my recycle bin, which I thoroughly had deleted yesterday. My video is gone of course. Fortunately I found an even better one on YouTube which I add here just to give you an idea of the perfect performance of these two women. They really look and sing like the original Abbas. !

The gentleman with the white hairs is the trumpeter of the orginal Abba Group. 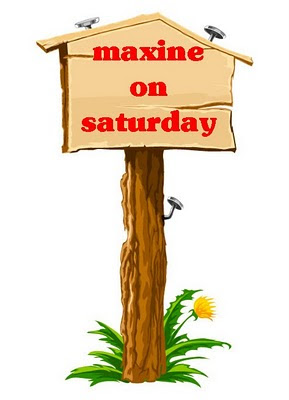 Please go to The Teach to find more "Maxine on Saturday"

I come to an end with the content of my show case. All the other things I have shown already in Show & Tell.

A shaving knife with an ivory handle. It belonged to my grandpa. It is very beautiful if you call a knife beautiful and a real antique.

These are miniature guns, some of them as small as a keyholder. Mr. G. collected them once, long time ago. Behind in the red envelope are silver medals issued for the Bicentennial of the United States 1776 - 1976 which my aunt had sent me and which I have shown already.
Posted by Gattina at 06:00 11 comments:

13 Quotes about Valentine's Day and Love

1. Valentine's Day is when a lot of married men are reminded what a poor shot Cupid really is.

3. I wanted to make it really special on Valentine's day, so I tied my boyfriend up. And for three solid hours I watched whatever I wanted on TV.

4. I got a Valentine's Day card from my girl. It said, 'Take my heart ! Take my arms! Take my lips!' Which is just like her. Keeping the best part for herself

5. Before I met my husband, I'd never fallen in love. I'd stepped in it a few times.

6. Love is the thing that enables a woman to sing while she mops up the floor after her husband has walked across it in his barn boots.

8. Get married early in the morning. That way, if it doesn't work out, you haven't wasted a whole day.'

9. Women with pasts interest men... they hope history will repeat itself.'

10. Love is like a booger. You keep picking at it until you get it, then wonder what to do with it.

11. True love comes quietly, without banners or flashing lights. If you hear bells, get your ears checked.

12. Love is a mutual self-giving which ends in self-recovery.

surprise ... opening the door of a closet
Posted by Gattina at 06:00 8 comments:

MY WORLD - BACK TO THE PAST

The weather for once was so nice that I thought to make a little trip in the past. I went to the part of Brussels where I lived with my parents in 1958 til 1965 when I moved out and had my own flat. But the neighbourhood remained the same

The street where we lived

and the house. It hadn't changed at all. See, I also lived in a "white house" !

Instead of the vegetable and other stuff shop there is now an appartment. It had been one of these little shops you don't find anymore where you could get everything from potatoes to a safety pin.

my way to the school (which doesn't exist anymore)

When I got married we moved into this appartment on the first floor, not far from my parents

It was a strange feeling to imagine that I had looked out of the window there 40 years ago and went in and out the entrance door.

almost around the corner was and is a very modern church (all catholic of course) where our son had been baptisized.

On the way to the parc

I stopped at the church where we got married

I couldn't remember anything !

40 years ago I must have kneeled here.

As usual the catholic church is only for intellectual people that's why it is written in latin that Pope John Paul had held a mass here on May 20th, 1985 when he visited Belgium and stayed with the monks of this church. It would have been so simple to write it in French.

The parc is very big and beautiful

When it snows whole Brussels comes here with their sleighs

This sign says "sleigh street". In summer it is full of people having a picnic.

FUN MONDAY - stuck in your house

The Church Lady has following question

How do you beat the doldrums when you are stuck in the house either because it is too cold or too hot outside? Do you read? Cook? Complete a home improvement project? Watch movies? Scrapbook? Please share your ideas.

When I am stuck in my house it's not a problem. I certainly won't cook other things then usual and spend my time in the kitchen. There is nothing to improve in our house either, other then changing the decoration from time to time, but that I do without regarding the weather, it only depends on my mood. I don't watch movies either besides a little crime story while we have lunch. After 40 years of marriage and being a retired couple we are allowed to do that !

What I do is first getting furious when I open the shutters in the morning and I look out of the window. Especially when it rains or it is wet, cold and grey. But then I remember that since 4 years I learned to use a computer and I forget the grey world outside. I take a cup of coffee and answer my emails. Then I visit my blogfriends and enjoy the posts from Australia, where people complain about the heat and that the sun is shining too much. I also surf the net a bit, because there are always new things to learn, or I play around with doing new headers or learning more about photo tricks and htmls.

As I use each spot of sunshine to go out photohunting, when I am stuck in my house, I have quiet a lot to do to select my photos and file them properly. When I am fat up with my computer and my window to the world, I take a book and read. I love reading. Or I call my girlfriends to chat and that usually lasts hours until it is time to prepare supper, watch a movie and go to bed.

I was in an ugly place in Waterloo, very industrial. Suddenly I saw a sign "Indian Shop". From outside it looked like a storage building. But when I opened the door I was in another world !

I nearly forgot to close my mouth !

View through the shop

The shop sells all this for the benefit of a little village in India.

The quality of the pictures is not very nice, but it was quiet dark in there and I was not allowed to use the flash. But still for me it was a weekly winner !

A question : What shall I do with this message ? I have no idea. I have nothing on a Google Page Creator, don't even know how to use it.
Posted by Gattina at 06:00 9 comments: