Last Sunday the sun was shining as if payed for and it was quite warm for the season. An exceptional weather for Belgium. I decided to go to the Ardennes, the Belgian "mountains", to take some pictures of an historical site..

Enjoying the sunshine we walked on the old roman site, where we could admire a roman farm from 200 after JC ! The cows we saw weren't quite that old and what they had left on the grass was even very fresh. I noticed that when I stepped in a very nice hill of cow poop. Hopping on one leg, I tried to clean my shoe, but my balance apparently wasn't the same as it used to be in the past, because I found myself suddenly sitting in the grass. The pleasures of land life !

First thing I did when we stopped in a Café was going to the restroom to clean up myself a little. Besides the sink was a little white cabinet, which seemed very easy to put my handbag on. That's what I did. To my surprise my handbag disappeared inside and the upper side of the cabinet had drifted apart. It wasn't a cabinet but a white bin ! I fished for my purse between used paper towles and tissues and finally pulled it out. Now I had to clean myself plus the purse. When I finally came out of the restroom my friend thought that I had fallen in the toilet.

We sat down outside in the sunshine and had a nice local beer. There were a lot of people who had had the same idea and the café was full. It was very pleasant to sit there and enjoy the sunshine. When I returned home, I had forgotten my misfortunes with the cow poop and the cabinet and was quite happy with my day. Until the next morning where I realized that I had left my camera on the table of the café.

Moral of the story some days even when the sun is shining it's better to stay in bed or at least at home !

Note : I can't comment on blogs using AKISMET as spam protector ! They think I am a terrible "Spammer" ! Please check ! Apparently I am not the only one from Blogger !
Posted by Gattina at 05:35 10 comments:

This week I am really very happy to show you our new "acquisition" ! An Acer Aspire One Baby Computer. Yes it is so small, that you could think it is a toy, but it is a real nice computer with 120 GB and Window XP ! It has everything to make happy a blogger like me and to play around for Mr. Gattino. Because it belongs to us both.

When I saw it then in a shop and tried it out a little I thought we really would "need" it. 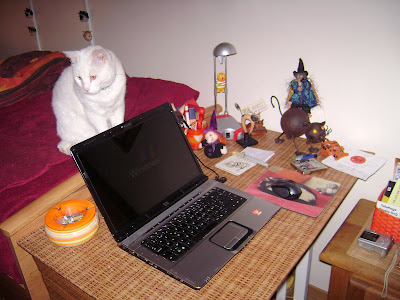 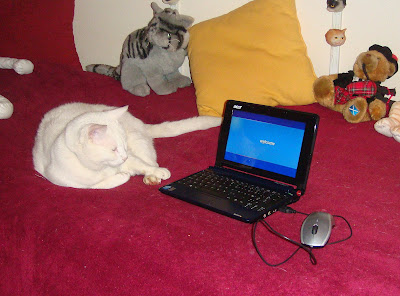 and here it is ! For comparison I asked Arthur to pose with my normal laptop and with the new one. Isn't it cute ?

Note : I can't comment on blogs using AKISMET as spam protector ! They think I am a terrible "Spammer" ! Please check ! Apparently I am not the only one from Blogger !
Posted by Gattina at 05:03 23 comments:


1. A grandmother pretends she doesn't know who you are on Halloween.

3. At first cock-crow the ghosts must go
Back to their quiet graves below.

5. Everyone is a moon and has a dark side which he never shows to anybody.

6. I bet living in a nudist colony takes all the fun out of Halloween.

7. If a man harbors any sort of fear, it makes him landlord to a ghost.

8. There is nothing that gives more assurance than a mask.

10. There are nights when the wolves are silent and only the moon howls.

11. I would rather sit on a pumpkin and have it all to myself than be crowded on a velvet cushion.

12. True love is like ghosts, which everyone talks about but few have seen.

13. When black cats prowl and pumpkins gleam, May luck be yours on Halloween. !

Note : I can't comment on blogs using AKISMET as spam protector ! They think I am a terrible "Spammer" ! Please check ! Apparently I am not the only one from Blogger !

After having been lent to the United States where he stayed for a while, David from Michelangelo is back to Italy !

Thanks to these sponsors

Jamaica puzzled by theft of beach

A good beach is seen as a valuable asset to hotels in Jamaica. Police in Jamaica are investigating the suspected theft of hundreds of tons of sand from a beach on the island's north coast.
It was discovered in July that 500 truck-loads had been removed outside a planned resort at Coral Spring beach. Sand traffic ! that's something new !

A TRANSSEXUAL truck driver who claimed she was forced out of her job for dressing as a woman has won £20,000 ($ 34.300, 26.000 €) in compensation. Former soldier Michael Gaynor, 38 — now Vikki-Marie — started wearing make-up, women’s clothes and jewellery to work in February 2007. An employment tribunal heard that she quit her job soon after as bosses started cancelling her shifts and colleagues cruelly mocked her. Honnestly heshe was more handsome as a man, but maybe the masterpiece is not yet completed and needs some more hormonal shots. Must be difficult not to know who you are !

THIS horse is certainly having a night-MARE.

Jason Harschbarger heard his horse making noises on the hill above his home and found horse Gracie a bit tied-up. The filly had to be cut free with a chainsaw after getting her head stuck in a TREE. I wonder if she expected to find some special grass in there ?? The poor thing !

THE diary and work tools of Britain’s last HANGMAN are to be sold off at auction.

Harry Allen kept a grim but detailed log of prisoners who went to the gallows at jails in London, Manchester and Leeds. His journal recorded his victims’ age, weight and height — and listed the exact length of rope required to ensure a swift, efficient death.He even commented on the success of his work and praise he received.

One of those executed by Allen was Arthur Osborne, found guilty of the murder of a 70-year-old man in 1948 and hanged in Leeds on his birthday. Allen wrote in his ledger: “Very good job but not expected to be so. Was hung on his 28th birthday. “Got highly complimented on the speed of the job.” Isn't that a lovely man ?? the perfect husband I would say ! He must be very romantic especially during Halloween.

Oueen had a Google giggle

THE Queen stunned IT staff yesterday by giggling at the video of a laughing child as they gave her a tour of Google’s headquarters. The clip of a tot with an infectious laugh was shown to Her Majesty as an example of video-sharing site YouTube – bought by the search engine two years ago. The Queen, who was accompanied by the Duke of Edinburgh, called the youngster a “lovely little thing”. Compared to this event, the world wide financial crisis is just a little drop in the sea ! THE Queen has giggled with Google !

And last but not least : I lost my camera on sunday in the Ardennes. I have looked everywhere but it's gone. The worst are the pictures I had taken from a roman site there which was so beautiful.

After the first shock, I had a very good idea ! Mr. Gattino and son wanted to offer me a new camera for Christmas a Sony Cyber-shot T300 as I felt in love with it. I had bought the camera in Germany a month ago, because it was cheaper there and Mr. Gattino had put it away. So I told my men that I need my camera NOW and not for Christmas otherwise I would get a nervous breakdown immediately. Guess what happened ?

Here is my new one !

It's small and handy and has a touch screen. I like small cameras, then I can take pictures secretly just like a paparazzi ! (attention !)
Posted by Gattina at 07:37 9 comments:

FUN MONDAY - A DAY WITH ME

She says : I would like you to take your camera on a day tour with your. I want to know where you go, what you get up to on a "normal" day.


I don't know if my days are normal, but here is the way I usually spent my days.
I get up in the morning of course, which I suppose is also normal. Less normal is maybe the fact that I am a very early bird. I wake up between 5 and 6 am and then nothing helds me in my bed, I have my head full of ideas for my blogs or for photos, so I get up. Usually everybody thinks that I am crazy, now that I could sleep the whole day I get up that early what I have never done before. It all started 2 1/2 years ago. Why ? No idea but I feel very well and don't go to bed that early, always between 10 and 11 pm.

Unfortunately I can't show you a picture of me sliding out of bed not to disturb two of my cats who always keep me company ! But as soon as I am standing, they suddenly come back to life and the first thing I do is 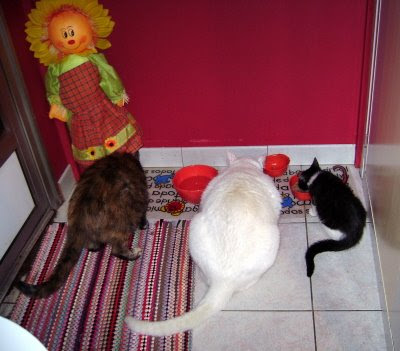 put water in the coffee machine and feed the cats !!

Armed with my cup of coffee, I then sit down here and look through the window of the world, my computer. 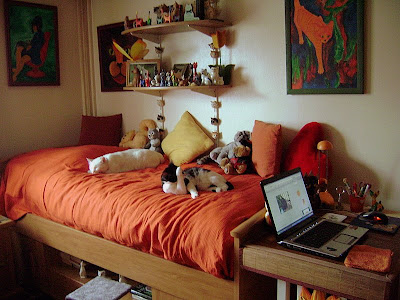 Sometimes during the morning I remember that a bed looks better when it's done, especially because I am spending the whole day in this room 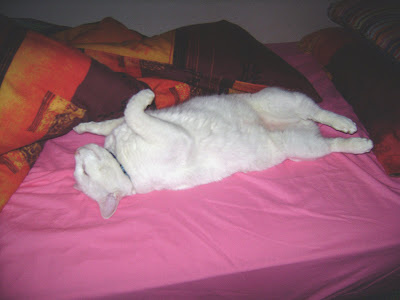 To make my bed I have to lift up Arthur and move him around which doesn't bother him at all. He continues to sleep as in the above picture. 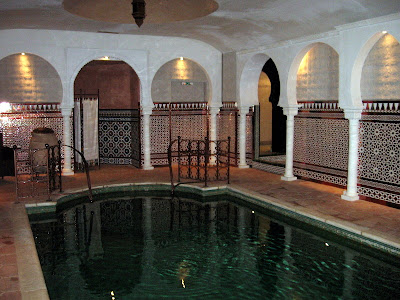 Around 11 I think I have to do something for my health and go swimming in my fitness club. 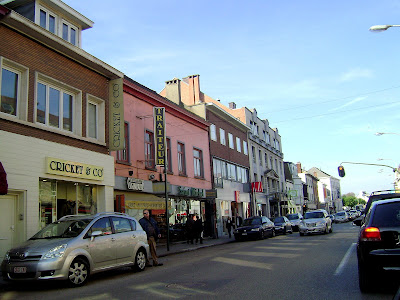 I also make a tour through the town center or do some shopping, but not every day. 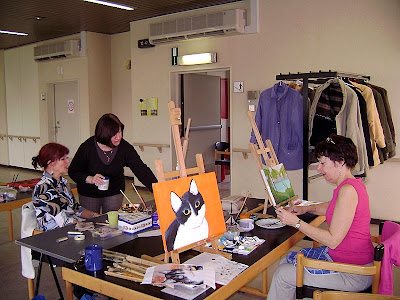 Thursdays is my most busy day, in the morning I have my painting group and in the evening I go to Yoga. (the painting is of my cat Rosie)

Now for the meals. No breakfast only coffee and orange juice for Mr. Gattino and me. Lunch is a sandwich he prepares for himself and I do the same for me. Around 6 pm I shut down my computer and we watch a little crime story on TV. Then I think about preparing supper ! After that TV again until we go to bed.

Of course my "normal" days are interrupted by phone calls or visitors. With all that blogging I don't forget real life and summer days are also different.
Posted by Gattina at 05:30 14 comments: