1. The week started with a heatwave ! We really fell from one extreme to the other. Now it was 30° and it became more ! 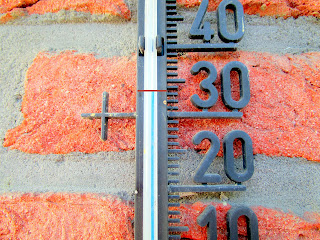 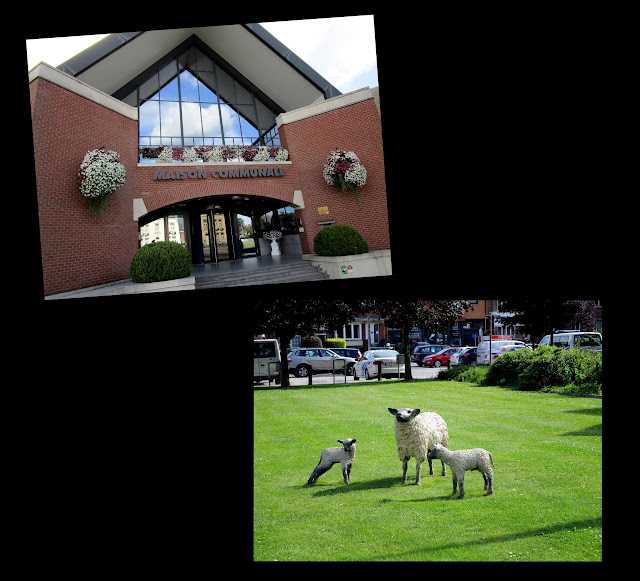 For our National Day festivities I had been asked to be a volunteer. My assignment was to keep out the people who wanted to enter the park where the festivities took place despite the barriers. There was a meeting with the Police Chief inspector and other members of the city administration to explain us what we had to do. When I arrived I saw the new statues besides the city hall and found them really cute. It gave back the image of the country side, which Waterloo had once been.

2. The National Day was on the 21st but it started already one day before. 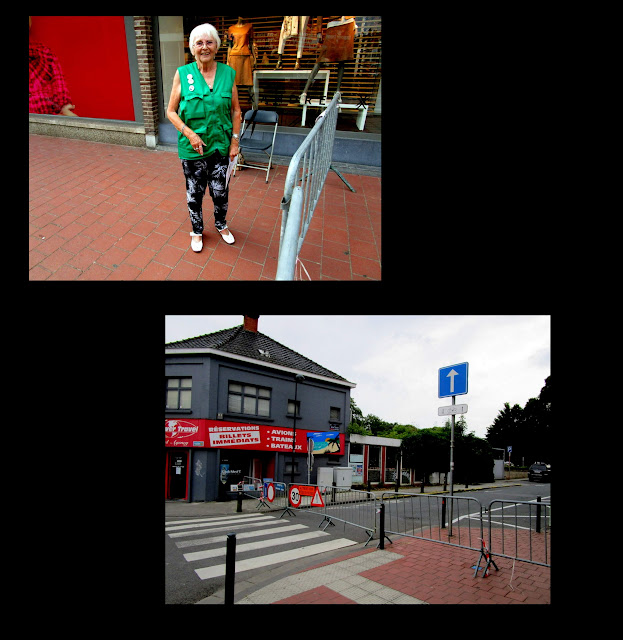 I had to wear my Waterloo jacket from last year's bicentenary so that I looked "official".  Despite the barriers some people still wanted to go through so I had to explain that for security reasons there were only two entrances to the park and not like the years before where you could go into the park from everywhere. The majority of the people understood and was very friendly, but there were also some who were not happy at all to walk three houses farer and nearly insulted me. I was sitting or standing there for 2 h and had quite a lot of fun. 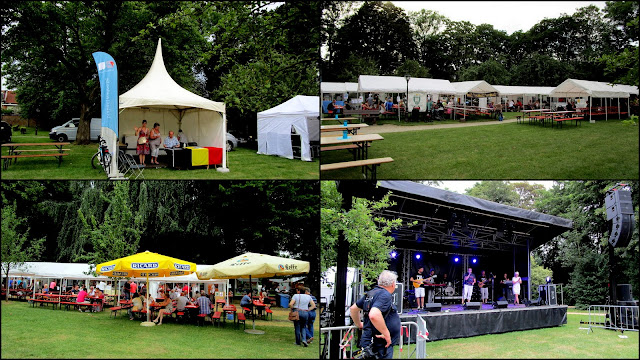 The first picture shows our stand from where all volunteers were dispatched. There were already quite a lot of people who drank their beer and listened to a Karaoke show. Some singers were very good, but some had never heard themselves singing. My cat Arthur sings better. 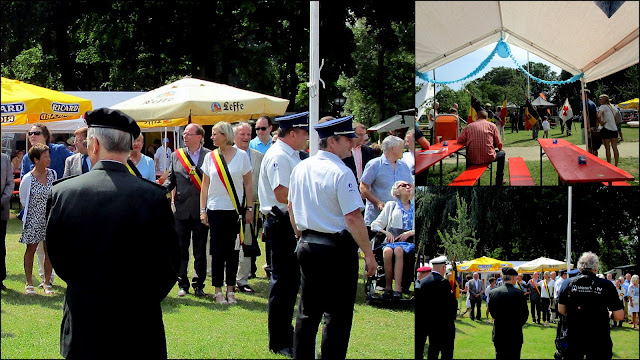 For once Mr. G. came with me (because he knows quite a lot of people from Waterloo)  and we arrived when the official part of the festivities just started. The mayor marched in with men carrying flags then the national anthem was played. Our mayor is a pretty women, very clever and mother of 3 children. It's the blond one with the white blouse. After that we walked around met lots of people Mr. G. knew, had a coffee and before the big heat started we returned home !

5. The Facebook group "Vivre à Waterloo" (Living in Waterloo) met at the basket ball stand and 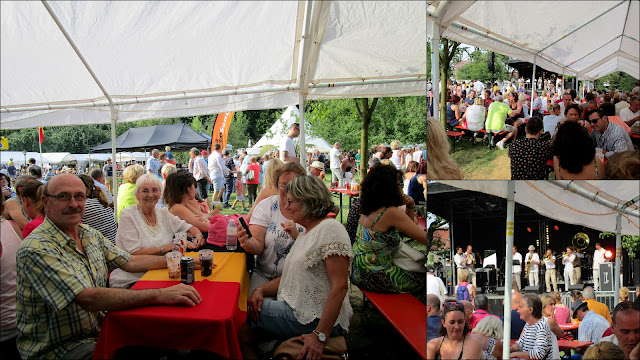 there we were celebrating and meeting each other life, it was very nice. As table cloth we had the Belgian flag ! 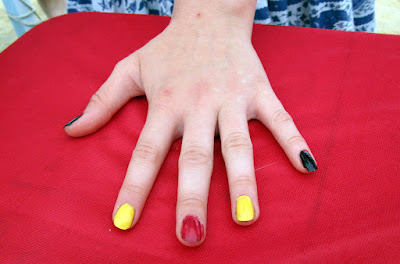 and a 10 year old girl had painted her finger nails with the Belgian colors ! 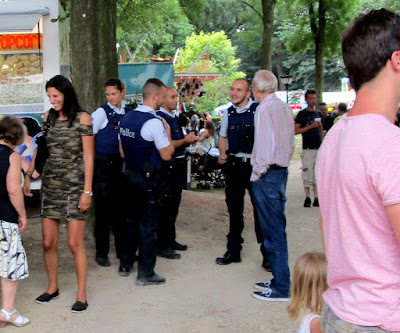 The police too looked relaxed and enjoyed the cheerful ambiance, despite the fact that the day before our Carrefour supermarket had to be evacuated because a suspicious parcel had been found. Fortunately it was not dangerous, I don't even remember what was in it. Anyway we have to live and make the best out of it.

more participants here at FIVE ON FRIDAY
Posted by Gattina at 09:42 21 comments: 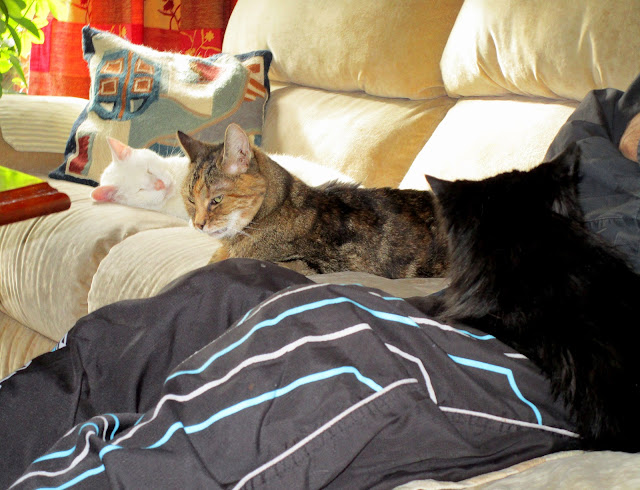 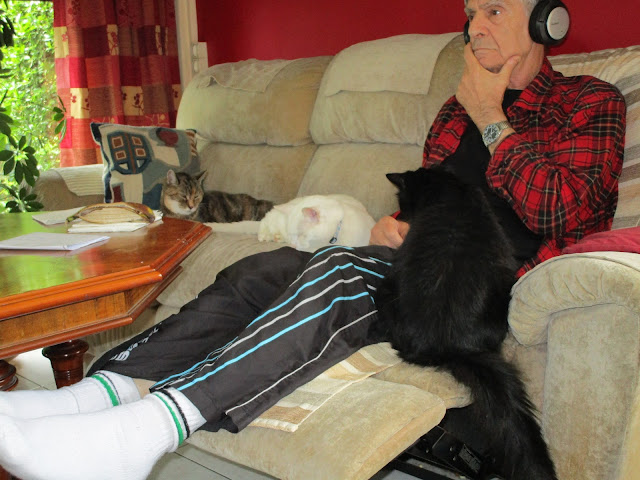 When my friend Claudie was here, we went to the Lake Genval (Lac de Genval) which is a lake located near Waterloo. The lake is a great leisure place for the people of Brussels. All around the lake there are beautiful houses from the Belle Époque. One of these houses is named Château du lac (Castle of the lake) which is now a five star hotel.

It was warm although the sun was not shining and we sat on Ilona's terrace with a nice fresh drink and chatted about ...... politics  ! Not like we are supposed to do, chatting about grandchildren, family, to do household works, no we started first with the terrorist attack in Nice, and came to the conclusion, that the actual situation is like a 3rd world war, only not in the classical worldwar style, but different. it can hit you everywhere, anywhere and finally you are not safe at all nowhere in the world. The best thing to do is live our life and enjoy it to the fullest before a car hits you when you cross the street.

Then we thought with the looks of actual politicians it's no wonder ....

Unfortunately they are not in a mad house, but working hard in politics. I wonder if they are twin brothers ? Maybe they have the same father and were adopted by different mothers ?? Fantasy has no limits ! 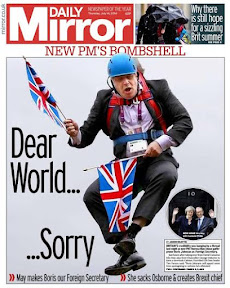 Then we talked about the Brexit and all the British people living here in Belgium who have asked to become Belgians. I can't blame them, because I had never thought that the British government was such a mess !

So far everybody thought that the British people were disciplined, honest, and that at least their government was also like this. And then came the Brexit, which nobody understood, not even the British people themselves.  Ilona said that this referendum was a big mistake, it is just as asking a school class if they prefer holidays to school. Most of them would choose holidays, only those who understand that learning is very important would vote for school.

We ended our chatting with the Belgian politicians, and the fact that this little country of 11 mill inhabitants has now 14 ministers, which sounds a lot, but compared to 2011 when we had 67 it has improved. Of course they still cost a lot of money, especially now with the bodyguards for each one because of the terrorists !

When we realized with what subject we had spent the whole afternoon, we had to laugh, because the world didn't get better ! We hadn't improved anything !

Sundays Waterloo is a ghost town ! All shops closed, only restaurants open. 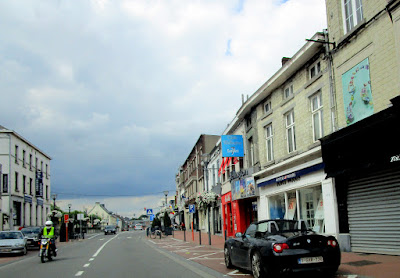 It is empty, because there is nothing to do, not even a café to sit outside. During holiday times you see some tourists, visiting the church and the Wellington museum and then they leave.

But now there are quite a lot of tourists at the Waterloo Lion and the new built restaurant, which is the only one there, so you have no choice if you want to eat or drink something is very busy. 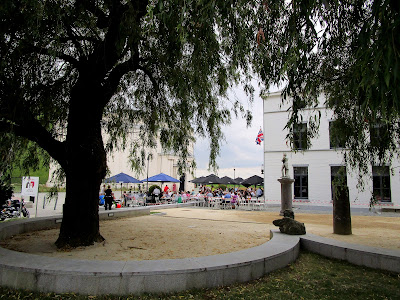 I went there to see if this time the soldiers did their weekend performance. The restaurant's terrace was full and indeed the soldiers were there ! They walked a little around, and then shot with these old guns which made a noise like a canon shot and flames came out of the gun. I was just chatting with a couple of English tourists with their son and daughter in law, when we jumped into the air not prepared to hear that shooting. Then the soldiers sat down and had a beer.

I explained a bit about the new site and how it was before and they told me that were not happy at all with the announced Brexit as for them now holidays are expensive, the pound compared to the Euro has almost lost half of its value.

Then they continued their way and I returned home, it was very hot and stuffy, no sunshine but no thunderstorm either.
Posted by Gattina at 09:06 6 comments: