1. The weak started with very humid and cold weather. For me impossible to go outside, when I did 3 steps I was already breathless. The weather station informed the population that the air was very bad and especially for people with breathing problems. So I had an excuse not to do any shopping or going out and spend my time at the computer, and later on TV. For the moment there are so many jokes, cartoons and videos around concerning the "Greatest" American President of all times. You see them  everywhere in Europe in the Newspapers, TV and of course on Internet. Instead of making America great, the poor man in his international innocence has made it ridiculous.

And he also wants to come to Brussels in the near future ! He dares to come to the "hellhole,” as he once called our capital, but has changed his mind ever since Belgium  has beomea city ! “Belgium is a beautiful city,” he had said during a rally in Atlanta. Probably he only learned the American geography at school and despite all the money he has, has never traveled or looked on a map (that is the drivers job). It's true he has enough space in his great country !

2. Opening the shutters, I saw the street and nearly got a nervous breakdown ! It had snowed again !! 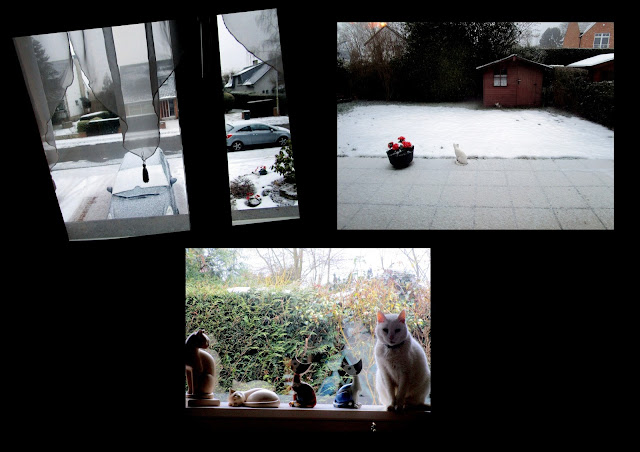 Arthur was a bit disappointed because in his opinion it hadn't snowed enough !

3. We had nothing to eat anymore and I was forced to go out. 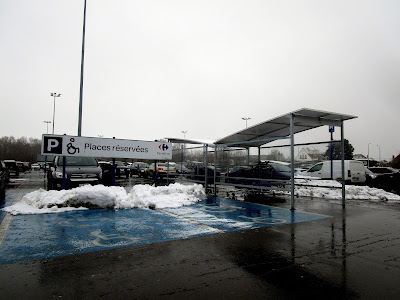 The parking of the Carrefour supermarket was disgusting, fortunately I had put on my boots ! There was an ice cold wind and I quickly went inside. I bought what I had to buy and didn't even make a little walk through this huge store, I preferred to return home quickly. 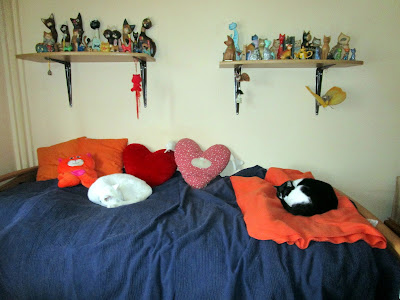 where Rosie and Arthur decorated my bed, waiting for better times.

4. I thought I couldn't go to my aqua gym because of my breathing difficulties, but wanted to try and it was really strange, in the water my breath was completely normal and even hopping around in the water I wasn't breathless ! Really surprising, but when I got out, it started again and instead of feeling light like a feather in the water, I felt like an elephant in the room ! 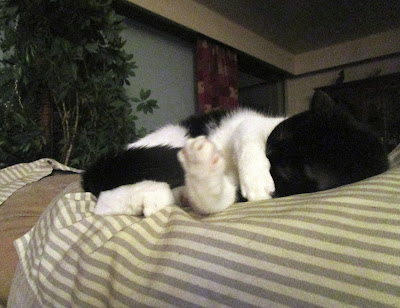 My intention had been to go to several shops, but I returned and did like Rosie I refused to look out of the window again ! 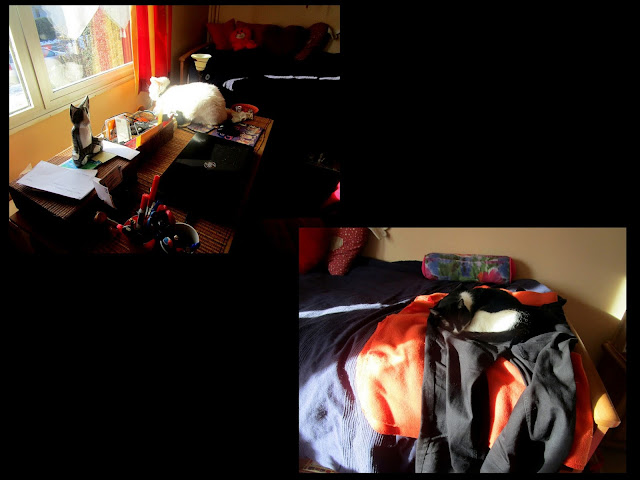 Arthur and Rosie immediately selected the best places for a sunbath, Arthur on my desk and Rosie on my Jeans !

Looking in the mirror I saw something similar to a witch and decided that it was about time to go to the hairdresser.. When I arrived I saw a lady sitting in the chair with wet hair and I thought, I saw this face two days ago on Facebook in "Vivre à Waterloo" (living in Waterlooà ! and the second miracle happened ! It was my very first neighbor 42 years ago,  here in Waterloo. We lived together side by side  only separated by the hedge. Later Dominique moved into this house. This must be more than a simple  coincidence that for about 25 years we hadn't seen each other and now in between 3 days I first see her picture on Facebook and then life at the hairdresser !

And we were both happy that we had met again, none of the two of us knew why we had lost contact. Probably because we had no time, We updated each other of the most important things, what her 3 sons and 1 daughter had become, how many grandchildren etc. Then we promised to see each other as soon as possible, because now we have all the time of the world ! And the last was that her second son has his girlfriend living  in my street, 2 houses farer ! She moved in a few months ago and I haven't seen her yet. The world is small ! When he was a little boy playing in this street he probably never thought that he would  have a girlfriend later who would live here where once an old couple lived who had passed away ! 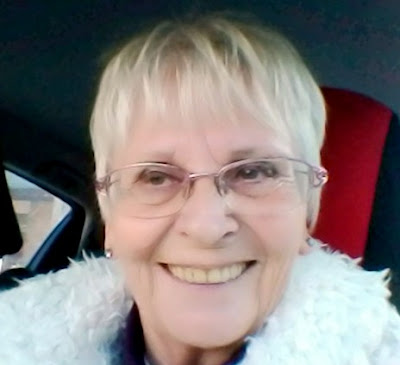 I had asked the hairdresser to cut my hair a bit, and chatting I didn't pay very much attention, so they are shorter as usual, but I comforted myself ... they will grow again (at least I hope so !!) 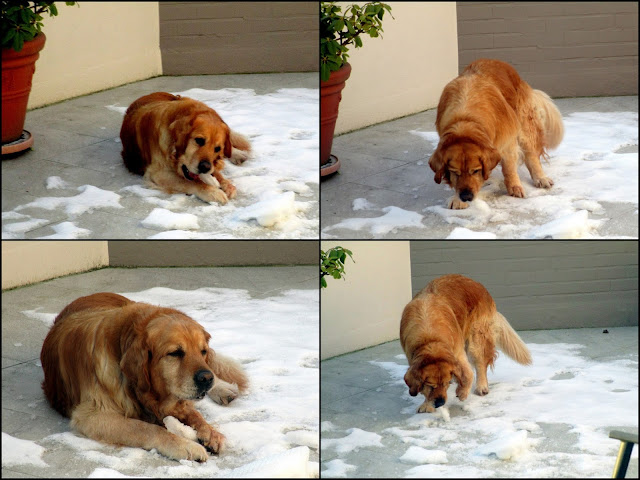 
1. "The cure for anything is salt water-tears, sweat, or the sea." (Isak Dinesan) Would you agree? Of the three, which has 'cured' you most recently ?
Definitively the sea !  It contains salt like in tears and sweat but I prefer to swim, then to cry and sweat !

2. What's something you can't eat without salt? Do you normally salt your food a lot, a little, or not at all?
I eat everything with salt, I am rather a salty girl than a sweet one !

4. A favorite book, movie, or song with an island setting or theme?
Island in The Sun

I love this song, it reminds me of my youth, although at that time I didn't understand all words. My English wasn't good enough.

5. Yesterday-did you run your day or did it run you? How so?
I ran my day without ruffle or excitement

8. Insert your own random thought here.
I am repeating myself each week ! I want spring, warm weather and to be able to go out !!

It's still freezing and I took the opportunity and emptied our freezer and put the few things which were still inside in the garden, so it could defrost.

The afternoon I spent with Ilona, she had met a man and wanted to have my opinion. He was bald like a snooker ball, and had the same size as me not really what I would call a handsome man,  but he was very friendly, and a good talker. So I gave her "green light" under the condition not to fall in love, but only go out with him as a friend, as usual men that age are married and pretend they would leave their wives, which of course they never do !

Later we were invited to my neighbor's 78th birthday ! In April it will be 42 years that we are neighbors ! That's half a life ! 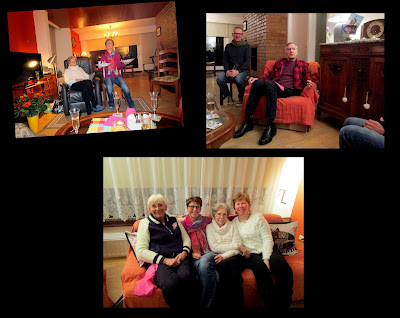 Here we are all together she and her two daughters and me. We had a real nice time. 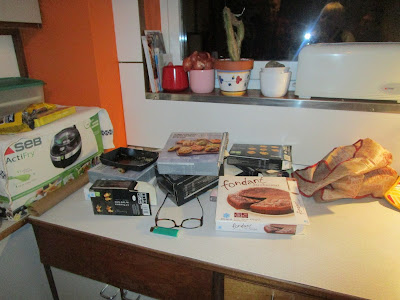 The youngest daughter had prepared a lot of different appetizers had baked them in the oven and we drank champagne with them. After that we had two birthday cakes, it was delicious. She then showed me the kitchen and said yes I have worked the whole morning to prepare the appetizers and the cakes look : and on the table were all the empty boxes which had contained the frozen starters.They also buy their food at Picard.

Sunday I spent with Nicole, she had got her daughter's little computer and needed some help.
Now she had got used to the tablet, she has forgotten about the computer and wanted to open Firefox with her finger ! 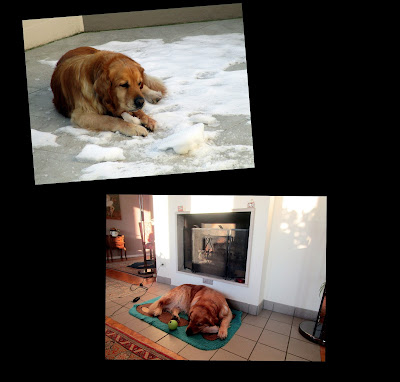 and while we were busy with the computer, Charlie ate a block of ice on the terrace and then settled down in front of the open fire.

The most famous cartoonist of Belgium, Kroll and Philip Geluck show their contempt with humor ! 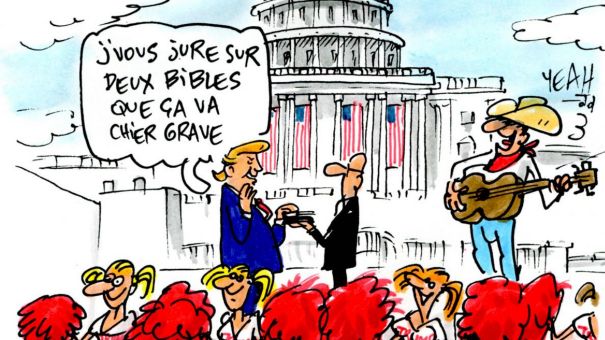 I swear on both bibles I'll give you serious shit Never learned these words in English at school ..... 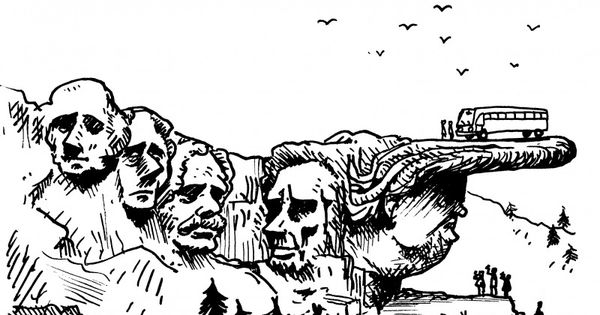 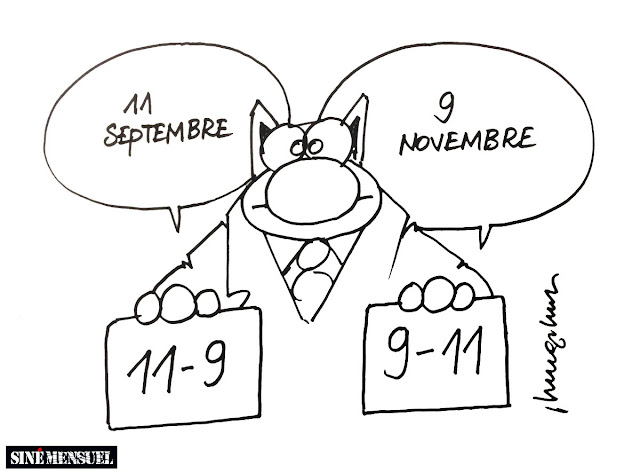 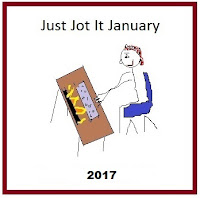