1. On Easter Monday Ilona had asked me to come with her for an excursion with her Thai Chi group. It was not that far away from Brussels in East Flanders. 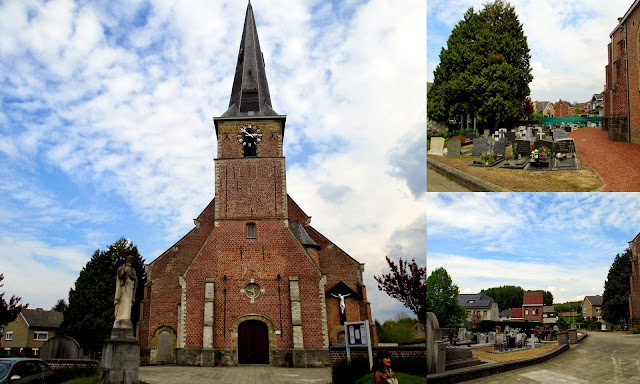 We arrived in a little village where the cemetary is still around the church, which is very unusual in Belgium. It was the first time I saw that. 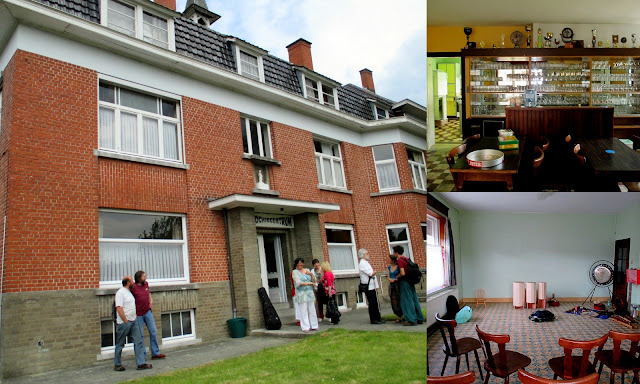 We all gathered in front of the village's club house, in which we should later have a coffee break and then listen to a concert. The instruments where already displayed on the floor. 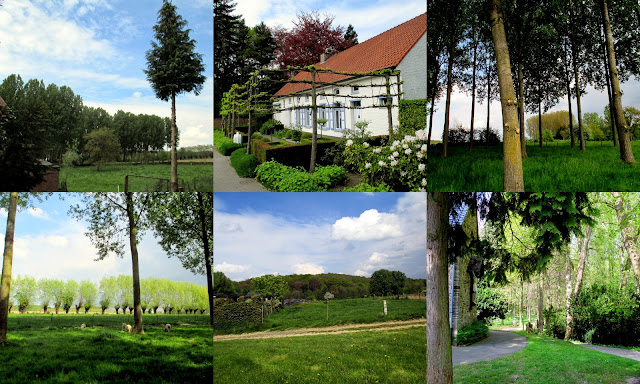 The landscape was very peaceful and beautiful, sheep and cows were grazing and wood mixed with open spaces. It all looked very green. 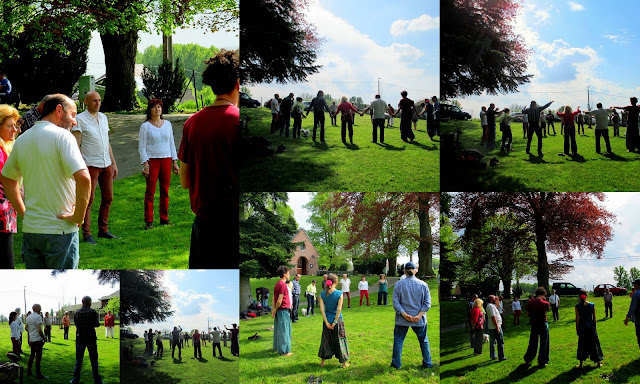 In one of the open spaces they stopped for a Thai Chi exercise. I watched sitting on a bench, because I have forgotten all about Thai Chi which I had done quite a long time ago. Ilona of course participated, wearing red jeans and a white blouse. 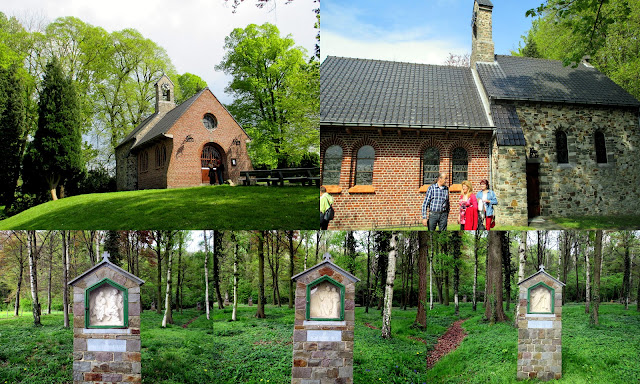 When the Thai Chi was finished we walked through the wood to a little chapel, which the leader had chosen for a meditation. 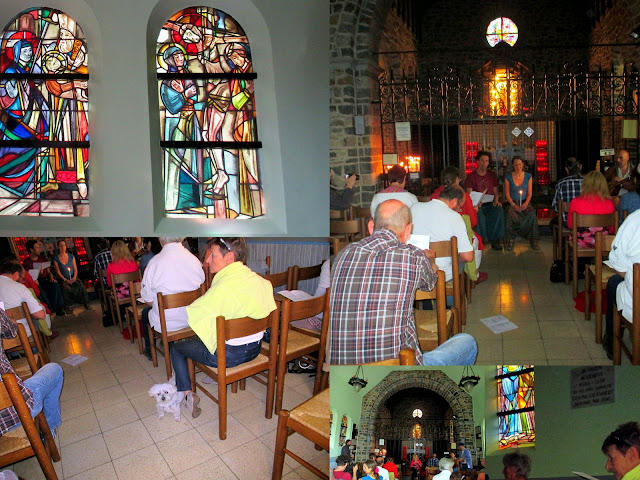 I went with them inside just to see what a meditation was, but as the woman who read a text had such an awful accent that I didn't understand a word. The whole thing was in Flemish, and I didn't have any problem to speak and understand, but not when somebody has an awful accent. Anyway meditation is not my thing and I sat outside in the sun together with the little dog of a lady who meditated. The dog and I walked around the chapel, when suddenly it started to rain so I went inside the Chapel with little doggie. When he saw his owner he started to bark, and the meditation group started laughing. On the owners lap the dog stopped barking and was quiet, but when they started to sing, he sang too which again caused laughter. Meanwhile the rain had stopped and I went outside again with the dog. People who wanted to go into the chapel for a little prayer asked me if there was a mass taking place as they heard the singing but I told him that it was a meditation group. I better should have said nothing because they looked at me as if the devil was inside the chapel !

Then we went back and had our coffee with a waffle. 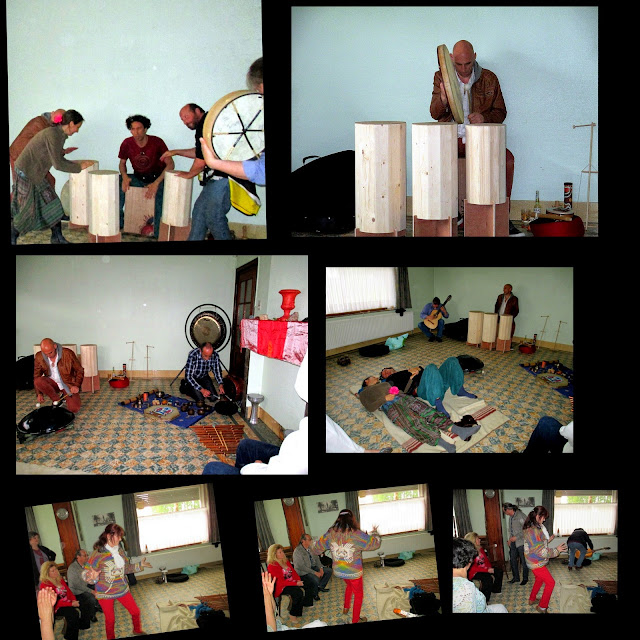 After the coffee the concert started, which I thought to be Indian. Indeed it was Indian, but the Indians were not from India but it was Native American music ! I love this music too, so I enjoyed the concert very much. People started to dance and Ilona with her 71 years was the dancing star !

The Native Americans were Flemish men, but they did a real good job !

2. The next day my legs hurt a bit from all this walking, I watched Oscar the robot mowing the lawn and cut some branches, then fortunately it started to rain and I went inside and relaxed at my computer !

3. Nicole had invited some friends to celebrate her birthday again, and we were taking a sunbath on her terrace and ate the self made strawberry cake ! 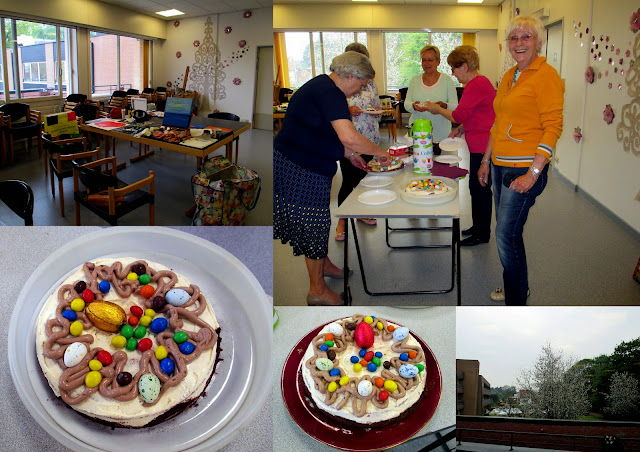 In my painting class we celebrated a late Easter and one classmate had baked these delicious cakes. I am still working on my sky painting. Looking out of the window I had this beautiful view on blooming cherry trees.

WORKING WITH A WOMANIZER

For 10 years I worked in an American company for textile fibres in Brussels, and was the Sales Assistant for Europe to three managers. An English gentlemen, with suit and tie ( mostly the same), always friendly and I strictly have nothing to say about him. A very nice German, happily married and he and his wife became our friends for many years.

The third was a French and a case for a psychiatric clinic. He had 4 mistresses and a wife, and of course he thought he could add me to his harem. Not only jumping on the phone to answer it but also into his bed. He apparently found this completely normal. I told him that I prefer my own bed and sent him to hell and we became good friends. At that time sexual harrassement didn't exist otherwise I would be very rich today !

After a while, I started to pity the poor guy, women were flying around him like butterflies around flowers or maybe flies around something else, and he didn't do anything, for that, just good looking and being charming.

Sometimes when he was on the phone with one,  I was on the second phone with another and had to comfort her, justifying his absence by inventing trips or meetings. I became very creative in excuses.  I also quickly found out that the only person he really loved was his wife. She was a very independent woman, with a very strong character, very intelligent and very beautiful.

I didn't have to lie to her, (I wouldn't have done it anyway), she knew her man. We became friends and accomplice and maintained our friendship even long after I had left the company.

With him I had not only to handle his various mistresses by phone, but he also asked me to write the answers to their love letters, which was quite difficult as I was always afraid that I would mix them up.

I wrote an appropriate text with my typewriter (no computer at that time) and he copied it per hand. He was very happy with this solution, he said that I had a much better writing style then him, and the women apparently were happy too. And as I always loved writing, it was OK. and I became a love letter writing specialist.

The worst moments were, when he had enough of a girl ! They mostly were young and stupid and I couldn't understand why they were loosing their time with a married man ! They all were convinced that he would leave his wife and marry them. As far as I know this only happens in very rare cases.

When the moment came to say good-bye, I had to order a huge bouquet of flowers, write a good bye letter, saying how much he was heartbroken to leave her, but he really couldn't divorce his wife who was a poor woman he had met (by mistake) when he was very young, and then there are the children, etc. etc my imagination had no limits !

I always had a considerable amount of tissues in my drawer and waited until they stormed into my office, usually with red noses and swollen eyes. He of course as a brave man had disappeared for a business trip, which was the room next door.

Usually I am always on the women's side, but in this case I couldn't feel any pitty with these girls, they just were hunting a wealthy men and as I said, they all were not very intelligent. They were females, not women, and this is a big difference.

I have to admit it was one of the funniest period of my career. 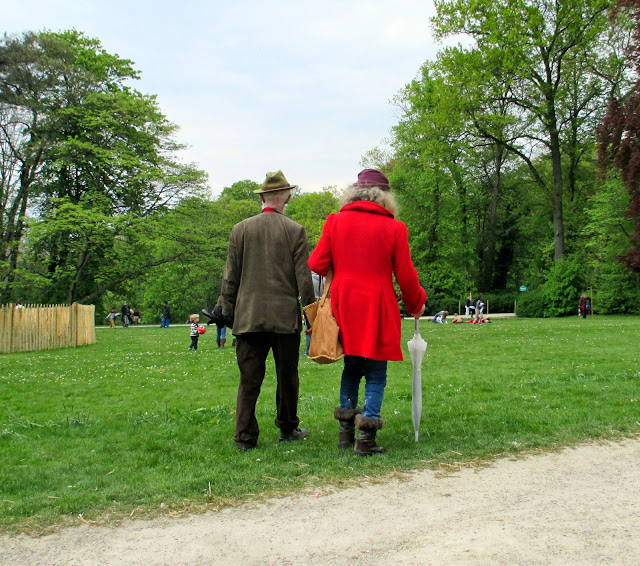 The Wolvendael park is a park of 18 ha (44 acres), located in the most posh municipality of Brussels, Uccle.This park has the originality of many landscapes. Its varied morphology, slopes, gully, trees green colors, blue and red, offer relaxation and discovery and there is also a huge playground for children and an open air theater and sculptures.

I went there on Easter Sunday because Uccle had organized an Easter egg hunting in this park !  The chocolate eggs were offered by the municipality. 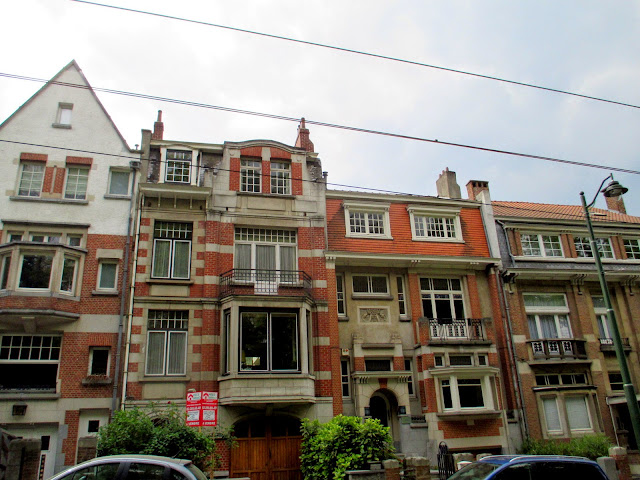 Some houses opposite the park 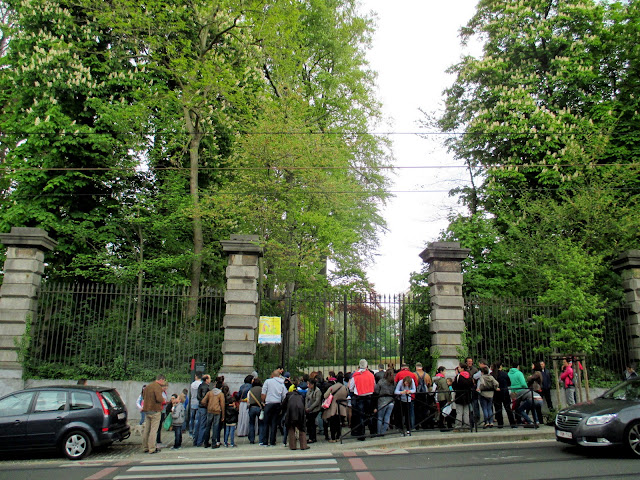 The park was closed to hide the eggs and people gathered in front of the entrance gate, long before the opening at 3 pm sharp ! 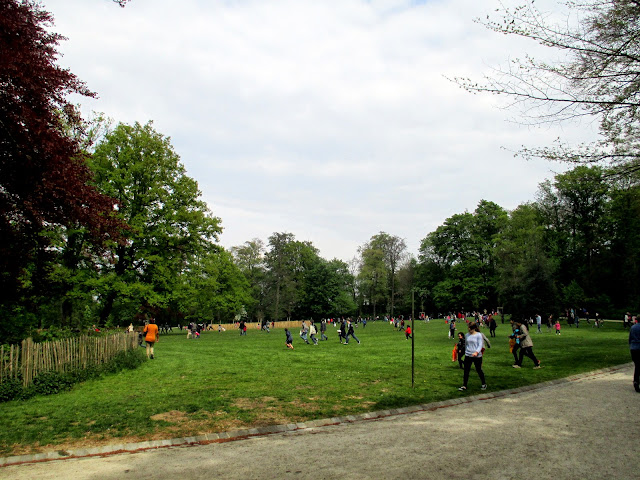 and then they all stormed inside 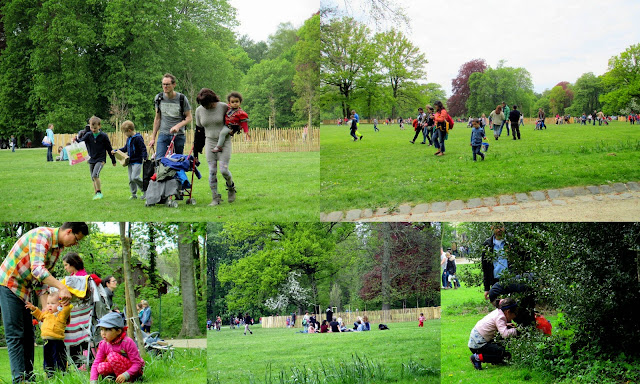 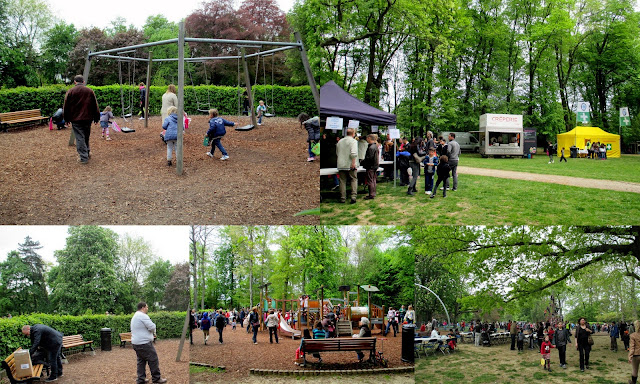 A man threw little eggs in a place under the swings and 8 children at once were allowed to go inside and pick them up. The playgrounds were full and there also was a waffle stand and a little restaurant. The red cross (here yellow) was there too in case of an accident. 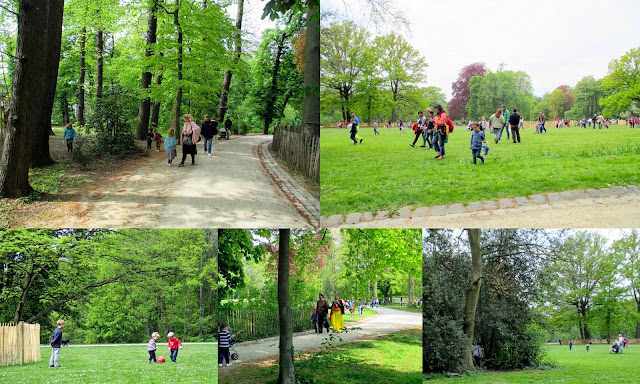 There was such a lot of space to play 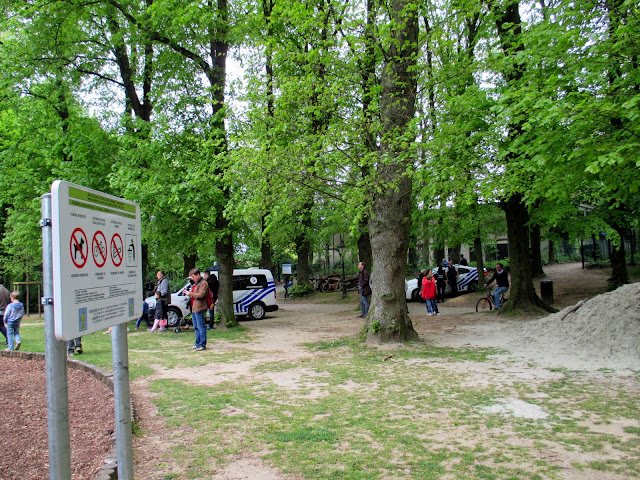 The police too had a discreet eye in case somebody behaved badly. 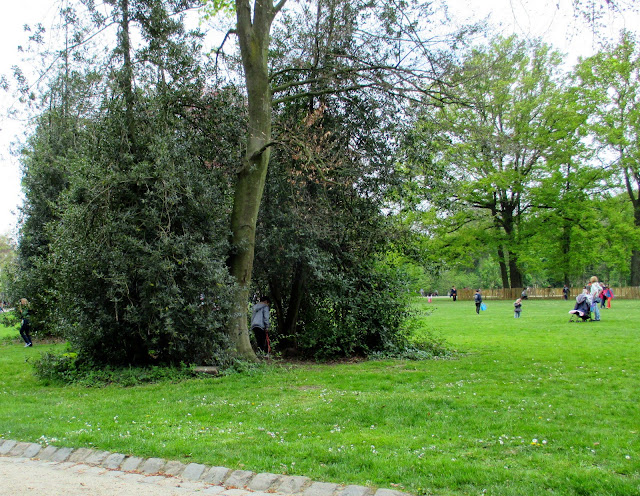 The roots of the huge trees were an ideal hiding place 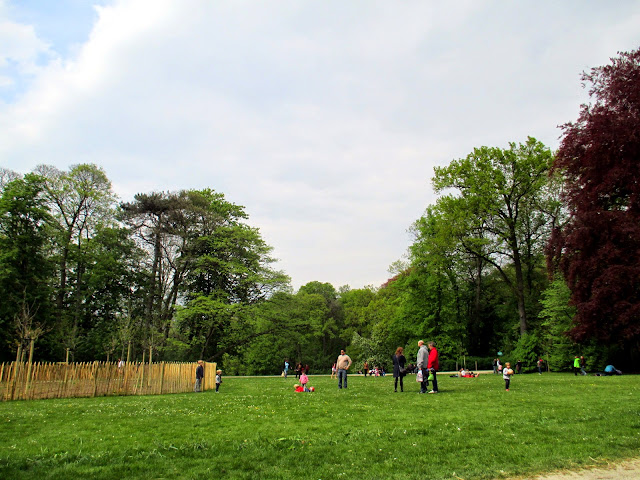 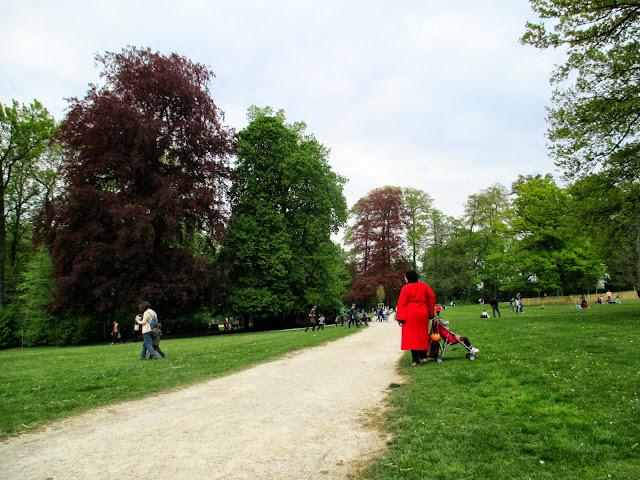 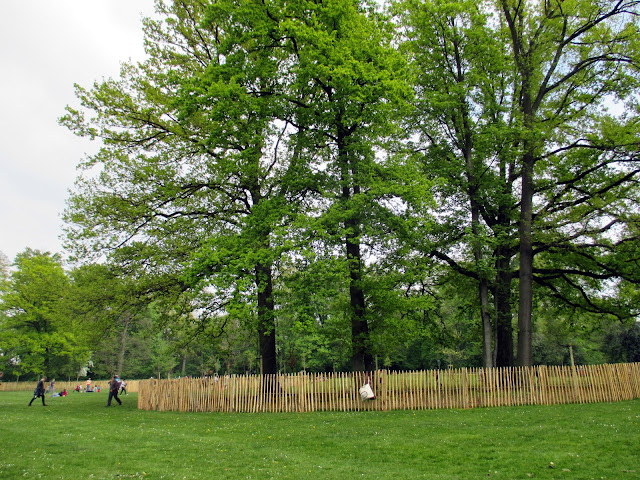 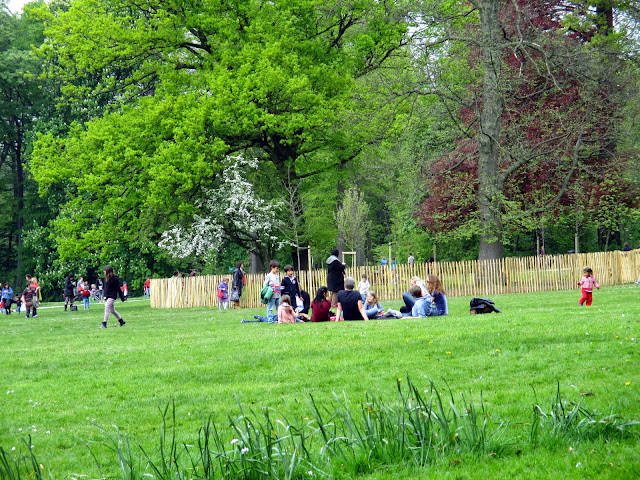 and when all eggs had disappeared, it was time to sit down and eat them !

MY WEEKEND OF APRIL 19

I don't know how it happened, but suddenly I was member of Google+ ! I hate Google+ and the way they sneak into your profile. I always pay attention to not fall into the trap, but somehow I did, but apparently I am not the only one because I found help on a Forum and deleted this unwanted thing ! 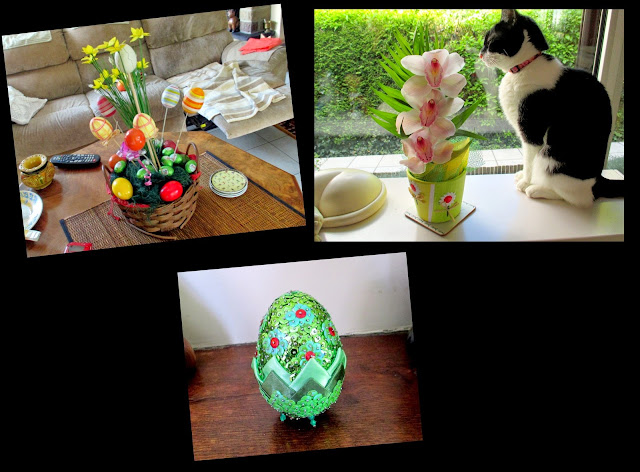 My Easter decoration was rather poor this year, as we were alone, but Mr. G. brought me this beautiful orchid and my cleaning lady gave me this Faber egg looking like egg, she had brought from Poland,  together with her Easter wishes. 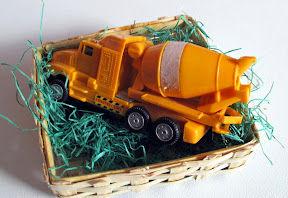 Apparently I am very good in Easter egg hiding, because we found this nest a week later ! 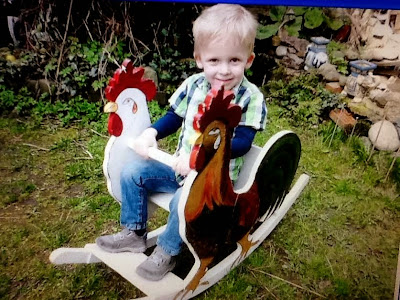 My son's father in law sent us this cute picture of grandson Toby for Easter. 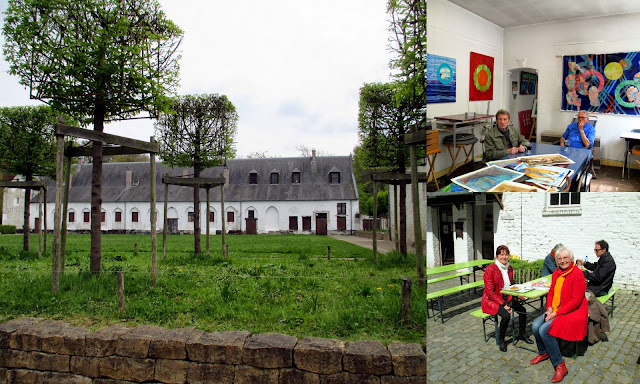 In the afternoon together with Ilona we made a little walk through the park of an old convent, where artists also expose, we had a chat with one of them and then had a home made cheese cake and coffee. 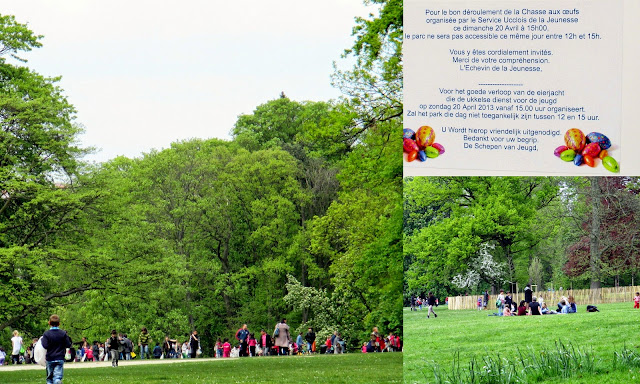 On Easter Sunday I decided to go to the Wolvendael park near Waterloo, located in one of the municipalities of Brussels. The park is very big and I had never been there. At 3 pm the Easter egg hunting started for all kids, and there were a lot ! Families and grandparents were helping to look for the eggs, there was a playground and the kids had really a lot of fun.

I took some pictures of the little once who were very proud when they had found some eggs ! I thought of my little grandson he would have had a lot of fun with all of them. After all the eggs had been found (or not) they played on the games or football (soccer) with their daddies . I enjoyed the sunshine for a while and watched them before I returned home.

3 years ago we had the same egg hunting in Waterloo, but for I don't know what reason they don't do it anymore. The eggs were offered by the city as it was for this park. With all the taxes we pay I wonder where the money goes if there is not even a little left for some Easter eggs !