FIGHT AGAINST THE CRISIS

It's the crisis in all countries and everybody should participate to get out of it. All TV stations remind us this every day ! The Belgian Bart De Wever, a ferocious Flemish nationalist and politician who is the president of the New Flemish Alliance (N-VA), a Flemish party, strives for an independent Flanders in a united Europe, probably then only under his leadership.

Of course he is not at all appreciated and rather hated by the Belgian Waloons. I have to say that when he speaks he me makes think of a guy who did the same speaches in Germany in the 1930th !

But now he is admired from all Belgians ! He did something for the economical crisis ! He lost weight ! and not a little bit, but a big mountain of grease, he shrinked from 142 kgs (312 lbs) in December to 92 kgs (202 lbs) in May. He has lost 50 kgs (110 lbs) in 6 months ! Now he became an example not for his politics but for his diet ! It was the Pronokal method which is certainly not for poor people. Don't ask me what that is, I don't have any grease to loose with a special diet, but rather with a diet of my wallet. That's my way to fight the crisis !

I am sure he still earns enough to feed his family, drive a big car and go on holidays, unfortunately it looks as if he has no money to go to a good hairdresser ! It's probably his wife who cuts his hair. 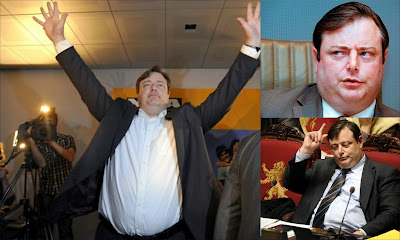 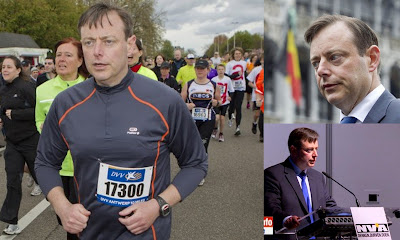 
1. On Monday was Whitmonday and a day off. The weather was beautiful so Ilona, her mother and I went to the Greek festival in the Domain of Huizingen near Brussels. Apparently it takes place each year but it was the first time I went there. 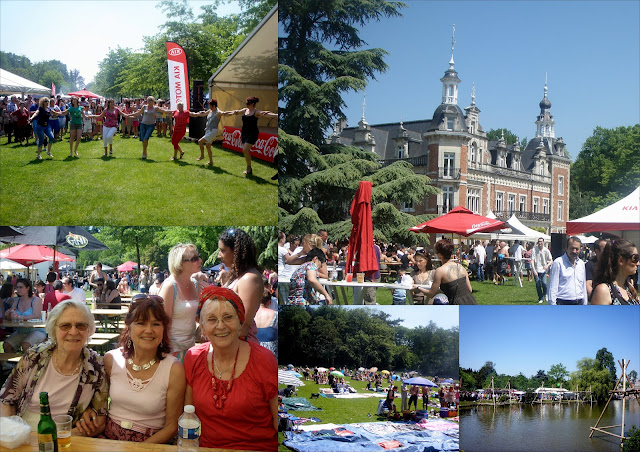 It was a very nice afternoon. There were lots of people who had their own picnic, and many food stands with Greek specialities. A Greek lady took this picture of us, Emilienne (Ilona's mother 88 !!) and the "young" girls of 69. We watched women dancing the Sirtaki apparently men are more lazy when it comes to dance ! Except in Zorba the Greek ! It was quiet hot and noisy so we didn't stay too long. But we had a nice lunch of something I had never eaten and I forgot the name.

2. As soon as the shops opened again after this long weekend I went to look for a new camera as a pickpocket had stolen mine, and I felt like somebody who has lost his leg. Fortunately I had my little spare camera so that I could take pictures of the Greek festival. This time I didn't buy a Sony Cybershot anymore, because they change their models each year and my stolen one didn't exist anymore and I had bought it just a year ago ! 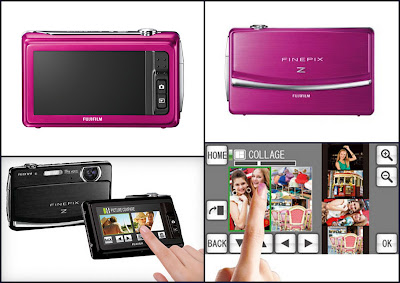 Finally I found this one a Fuji FinePix Z90, which has much more features and was much cheaper than the Sony one. It also has a touch screen, allows collages, and is very performant. 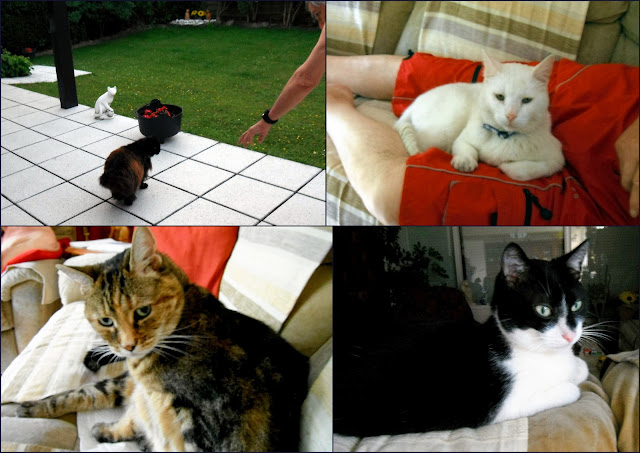 Of course my cats had to pose for me to try out the new camera.

3. We had again a heavy thunderstorm with a lot of rain, some towns around Waterloo were severely damaged with flooding and mud ! Fortunately we only heard some thunders and it poured but nothing was damaged.

4. I had to do some shopping to fill in our fridge and couldn't find my glasses ! Without glasses I can't drive as I am blind like a mole. Mr. G. grumbling "each day you loose something" helped searching everywhere in the house even in the fridge, but we couldn't find them the worst was I have no spare glasses ! Finally I remembered that I had taken a shower in the guestroom, looked there and found them in the sink ! Then I could do my shopping !

5. Once a year I go to the ophtamologist to have my eyes checked and was happy to hear that everything was OK even my view hadn't changed so I can keep my old glasses.The rest of the day I was busy to learn all features of my new camera and tried it out. I still have to get used to it, but each day it becomes better . 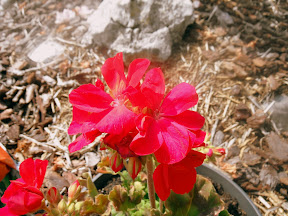 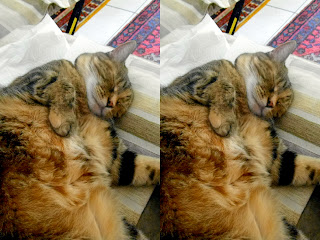 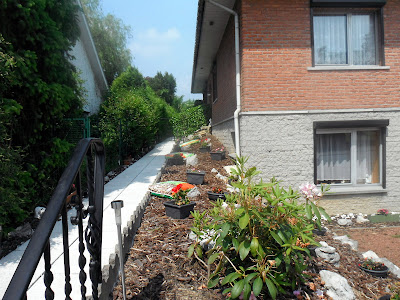 and just our entrance
Posted by Gattina at 06:00 17 comments:

When I was about 6 I was in my parents bedroom. I don't remember why but there to my delight I found a baloon on the bedside table. In 1949 baloons were not easy to find. The color was not very exciting for a child, not red, blue or green it rather looked quite transparent and boring. But nevertheless I took it and tried to blow it up. I blew and blew and blew but it was very hard to blow up !

My cheaks got thick and thicker, my head red and redder and suddenly somebody stormed in the room snatched the still not blown up baloon out of my mouth and hands and screamed in horror ! I didn't understand the world anymore, it was my mother ! Why was she so upset that I had taken a baloon on her bedside table ? I had only taken one and there were cerainly some more left !

Later on I understood. And I thought if she wouldn't have put up such a fuss I would never had remembered the scene.

So keep this in mind : whenever your child finds a "balloon" or a X-Video in your home, don't forget it has not (yet) such a dirty mind as you have !

Why do you always buy baloons for Dad and never for me ?
Posted by Gattina at 06:00 17 comments: 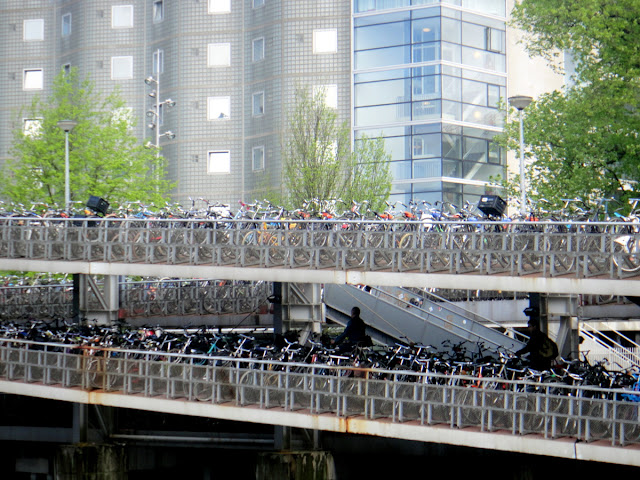 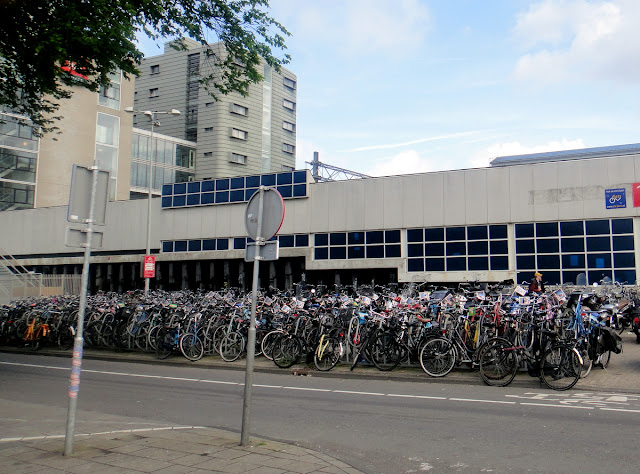 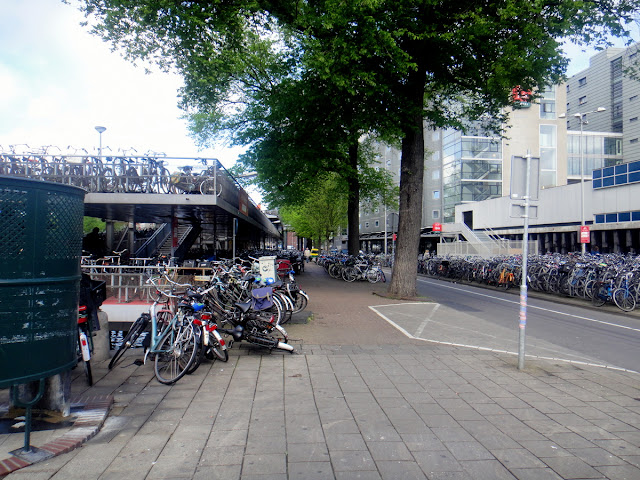 I had to go to Amsterdam for babysitting purposes. On my way back I left my son's house early with the intention to stroll a little bit through Amsterdam. Unfortunately it was very cold and very windy and I was almost blown away.

Therefore I only took a few pictures of what you see when you arrive in Amsterdam Central station and took the next train back to Brussels. Read more here
Posted by Gattina at 06:00

The worker who was supposed to replace the old joints between the tiles of our terrace let us down and didn't show up since Thursday. Fortunately all old joints are gone which had caused a lot of dust. I spent Saturday with cleaning the windows and Mr. G. finished off to clean the entrance with the Karcher ! Otherwise we couldn't use the terrace and a lot of dust was brought into the house although we tried to clean the shoes before. Hopefully we quickly find another one who does the joints. It really gets on our nerves !

In the afternoon I spent a little hour with Dominique. The sun still shines and we have a wonderful warm  weather, but there is also dust in the air, everybody complains because the cars are all covered with dust and  I had to go through the carwash because my car wasn't grey blue anymore but only grey.

On Sunday I went to the big Midi Market in Brussels and probably while I was looking through a bunch of bathing suits, a pickpocket stole my camera out of my purse which has several pockets closed with a zip. It was hanging on my belly and I didn't feel anything ! I realized it when I wanted to take a picture of a band who was playing there. I was furious and angry and returned home. Now I am without my camera and feel like my third eye is missing !

To forget all my miseries I went with a friend to the movies, and we watched a French comedy, it was fun, made us laugh, but nothing special.

After the cinema we went to a Pub called "The Apple" to have a goat cheese salad which is very well served there. There were lots of guests sitting outside on the terraces in a very nice garden. The waiter came and we ordered, after a while he brought us our drinks and then we waited while chatting. After 45 min we still weren't served. I called the waiter and asked him if they were busy to milk the goat and make the cheese in the kitchen. Therefore to keep us in a good mood he brought some freshly baked rolls and a second round of drinks for free. We continued to chat and time went by and suddenly we weren't hungry anymore. After 1 1/2 h of waiting we emptied our glasses and left the restaurant. The goat cheese salad will be for the next guests ! We had enough, at least we had 2 free drinks each !

I forgot to mention that our electric shutter fell down and needs to be repaired too ! 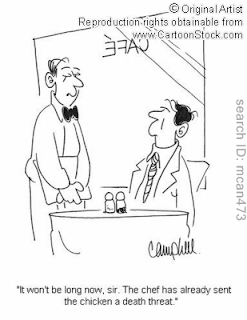 Labels: What did you do this Weekend

MY HOROSCOPE OF YESTERDAY

This was my horoscope of yesterday :

It's a lovely day. The air is fresh and clean. Confidence is high, and you feel as special as you truly are.
You radiate like warm sunshine.


Perhaps you have invented or created a thing of beauty that others want and your art is on display.
You may find yourself full of passion, enjoying the people that have come to either see your work or share in a common experience. You may also spend a great deal of time beautifying your surroundings at home with colors and art. . Because of financial gains recently, you could fall into a new way of thinking.

Indeed it was a lovely day, the air was full of cement dust and rather dirty coming  from the tiles of the entrance and the patio with a not so soft wind which blew clouds through the air.  My confidence was maybe high before I started cleaning, and I really felt special in my dirty jeans and T-shirt armed with bucket and sponge. I didn't radiate like warm sunshine, I was red like a tomatoe and sweating !

I have invented to dust the plants and flowers with a static duster, so that they became green and red again which indeed showed that my art was on display (the duster was yellow). I couldn't find any passion for cleaning in me, but I enjoyed the people who came by to pity me about my hard work. They didn't share a common experience, but they chatted with me about the last events in our street, which was a good excuse to do nothing and just rest.

This was the great deal of time I spent to beautify our surroundings not with colors and art but with with a duster, broom and bucket. I looked in the whole house to find our financial gains, but couldn't find nothing else but invoices.

Now I think over where the money is although this is not a new way of thinking.

See my horoscope was right ! 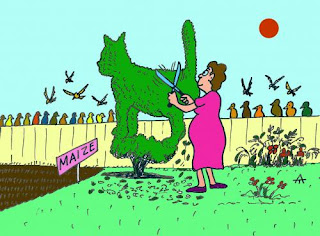 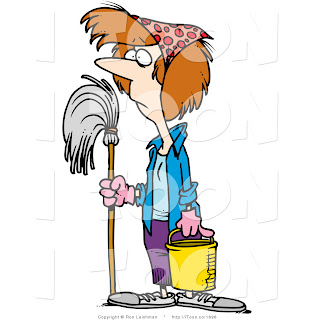