1. Our summer weather this week is rather strange, rainy and cold in the mornings, sunshine and warm in the afternoon ! I did some shopping in the rain, but could sit outside in the garden with my little computer and enjoy the sunny weather in the afternoon. 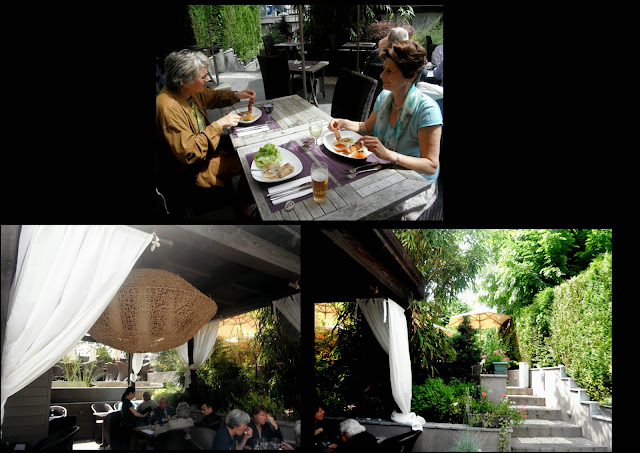 I went with Dominique and another friend for lunch in our favorite Asian restaurant, where we could sit outside. They have a beautiful garden and it's unbelievable that just behind the busy main street, there is such a quiet and green spot.

3. On July 3, the Belgians had a big surprise. I was sitting in the car when I heard that our King would abdicate for health reasons. That had never happened in Belgium ! 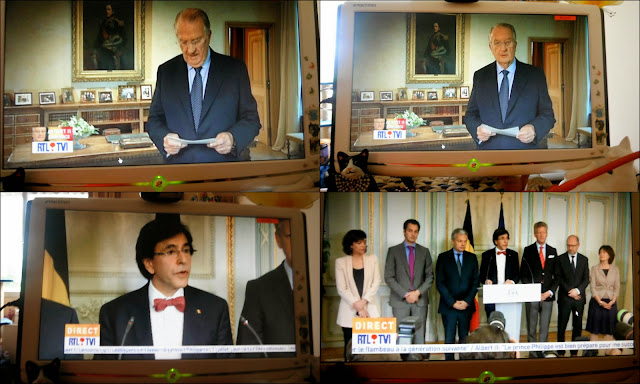 So I watched the King's speach on my computer, and then the prime minister and saw all our clowns of the government standing there like in front of a grave ! 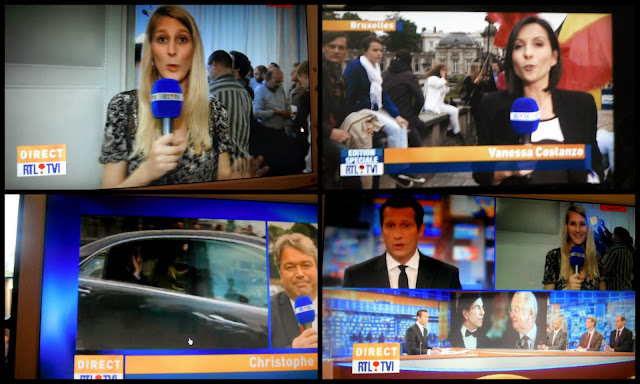 People gathered at the grids of the Royal Palace with the Belgian flag, but there were also some Flemish extremist who claimed a Republic, but they were quickly chased away by the others ! Then the King left the palace, waving to the crowd.

During our painting class we had a big discussion about the new King Philippe (age 53). Now the date is fixed when the abdication of the actual King and the intronisation of the new King will take place. They choose the Belgian National Day which is on July 21. The opinions are quiet mixed, some think he is too awkward and shy, the others think that he will be good and efficient. Anyway he has a very intelligent and beautiful wife and was not too shy to have 4 children. The eldest Elisabeth will be the future Queen, she is 12 years old. I don't know if this event inspired our paintings, but nobody worked a lot ! The coffee break became long and longer !

Although the school year is finished, we have decided to continue our class during the summer holidays and meet each Thursday without our teacher.

5. We had our bushes and hedge cut and for the first time were not happy at all with our gardener's work. I don't know if he became suddenly cross eyed, but the hedge looks like a roller coaster or almost.

When I visited  Greyfriars Kirkyard, the famous graveyard of Edinburgh, it was a sunny day and therefore looked like a very pleasant spot. It boasts a fine view of nearby Edinburgh Castle; encloses a well-preserved section of the Flodden Wall; and is surrounded by ornate and impressive mausoleums. 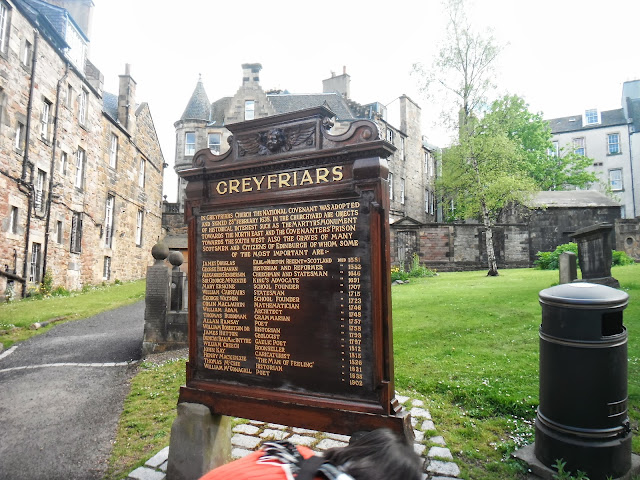 Historical dates at the entrance 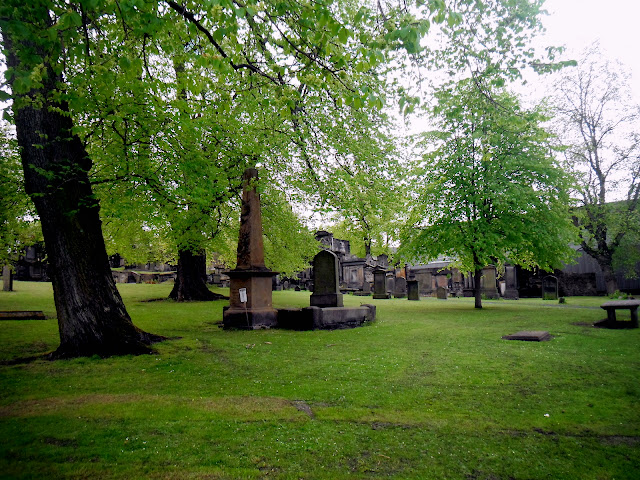 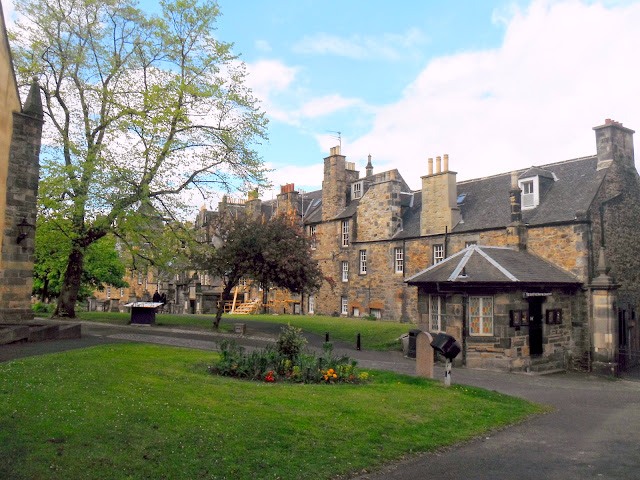 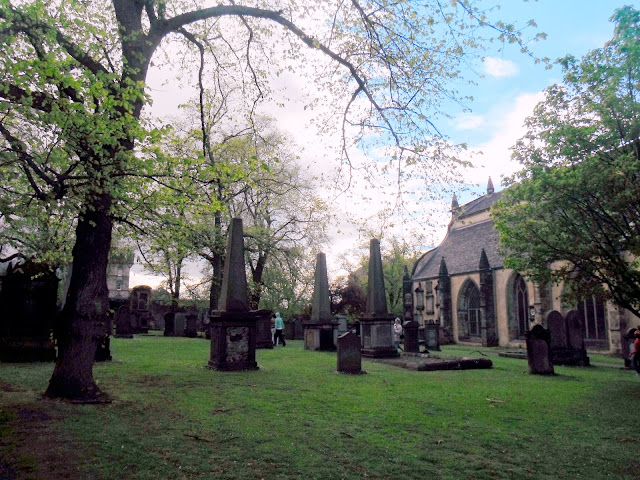 It is a popular haunt for tourists on the trail of Greyfriars Bobby, the loyal Skye terrier who stood guard over his master John Gray’s grave until he himself died. It was impossible to take a picture of the grave because there were so many tourists standing around and I don't look like a ghost so that they would all have fainted to allow me to take a picture. 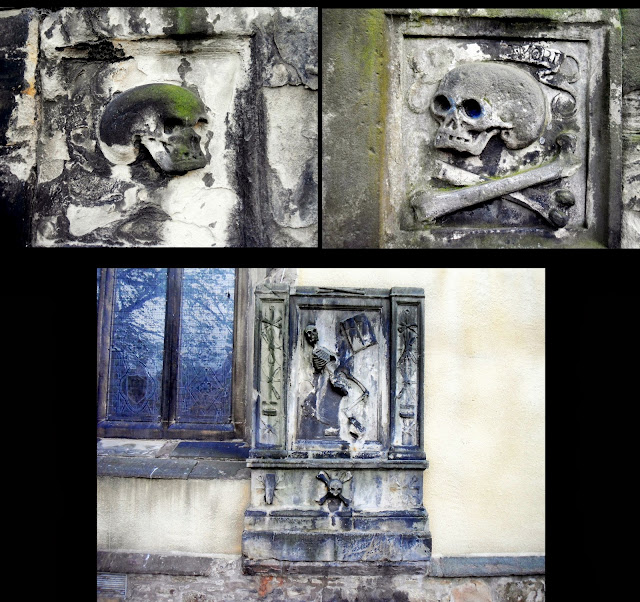 Many of the monuments and mausoleums are engraved with horrid symbols of death and damnation: skeletons and skulls; crossbones and coffins; austere angels blowing judgement-trumpets; and ‘figures rising headless from the grave.’ Even the walls of the kirk are decorated with lurid symbols of mortality and decay. 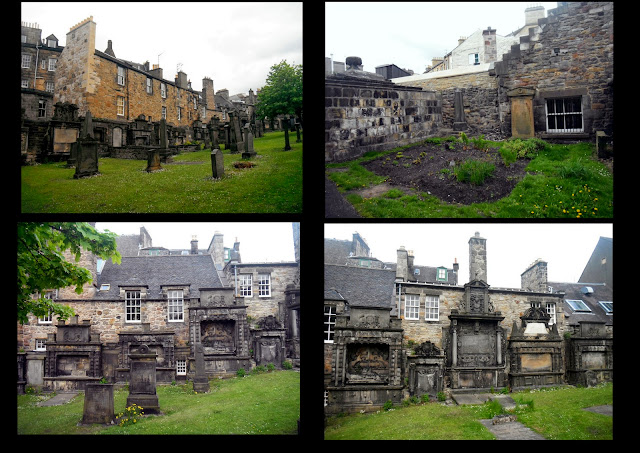 The higgledy-piggledy old houses of Candlemaker Row border the east side of the churchyard. Many back directly onto Greyfriar’s gloomy mausoleums so that, only a few inches separate the living from the dead. Clearly, only those with very robust dispositions dare to live there. I personally wouldn't mind to live in such a cute house ! And what a nice place for my cats for mouse hunting ! 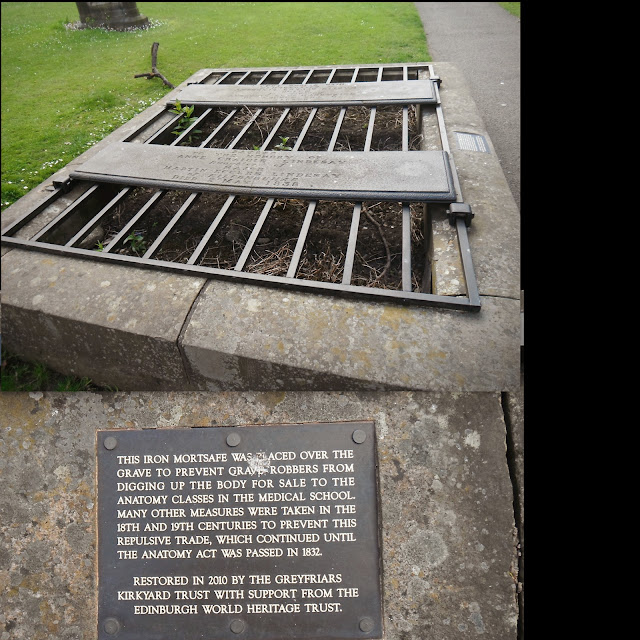 Some of the graves were locked with iron bars, so that the "bodysnatchers" couldn't steal the body of the dead person. Our guide also told us that the family was watching over the grave of their beloved deads for 3 or 4 weeks to be sure that the body wasn't stolen. The deceased person had a little bell attached to a finger so that in case he would wake up he could ring the bell. Today we probably would use a mobile.

However, the kirkyard’s supernatural reputation is built not on ghostly tales of long-dead Covenanters, but instead on legends connected with their chief persecutor, Sir George Mackenzie.

An encounter with the poltergeist is the highlight of the tour, with hundreds of people claiming to have been attacked by the enitity. The MacKenzie Poltergeist is now regarded as the best documented supernatural case of all time and the tour has become equally famous. 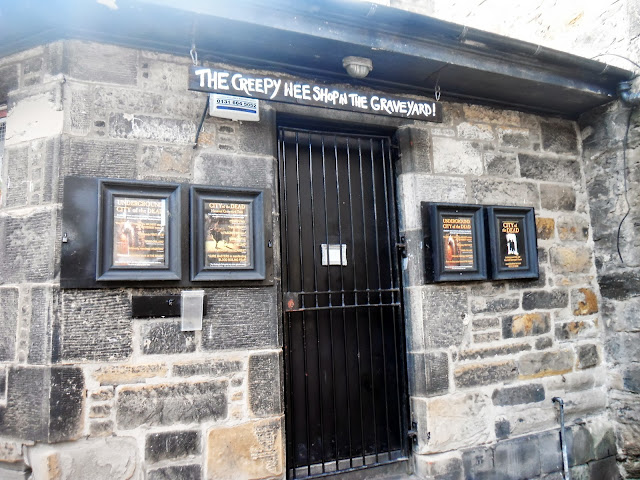 And if you want to make a tour and be frightened to death you can buy your tickets at Ghost tour building. Unfortunately we had no time and the weather was not good either as it has to be misty and dark ! Ghosts don't like sunshine !

If you want to read more about the ghosts of Greyfriars it's here
Posted by Gattina at 06:00 17 comments: 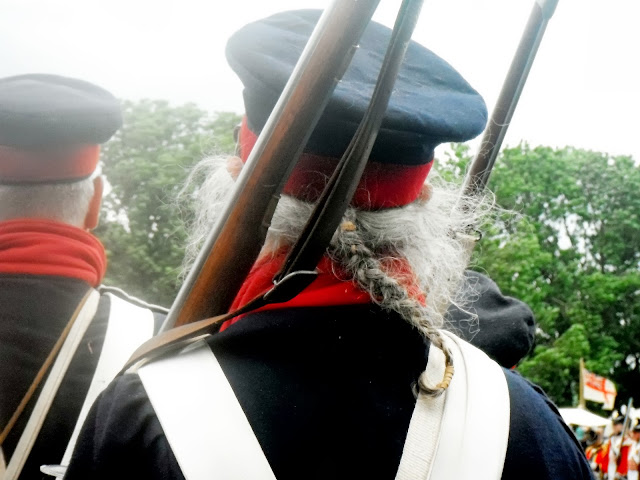 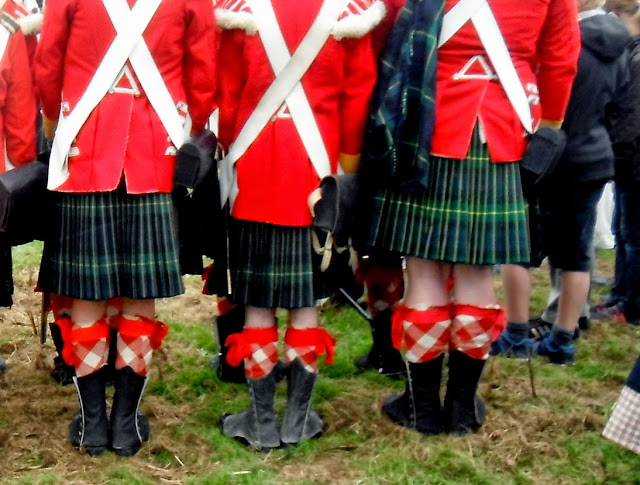 During the weekend of June 22/23 the yearly meeting and battle reconstitution of the Waterloo battle took place once again. This time I wanted to visit the Wellington's and his alleys camp (English, Scottish, Dutch and Prussians) near the Waterloo Lion. 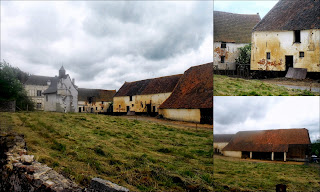 Helps you to remember what you have done on the weekend of June 29. If you participate please put the little logo on the top of your post and leave your link.

When I opened the stores on Saturday, instead of light and bright sunshine, it was grey and dark and the rain dribbled on the roof ! I just wanted to return "under cover". Instead I got up, and was in a real bad mood ! After having done such interesting things like putting the laundry in the washing machine, I started blogging which brought me into other countries were people complained about the heat and that they couldn't go outside either and even had to wear masks because of haze.

I had to take an umbrella when I went out for some window shopping, where it was dry at least.

Of course when you look for something, you never find it. Which was my case. When I came home Mr. G. had just finished watching his Formular 1, and seemed happy about the results.  I returned to my computer and googled for something to do this week. There was strictly nothing besides outside activities, but visiting things in the rain is not really my cup of tea. 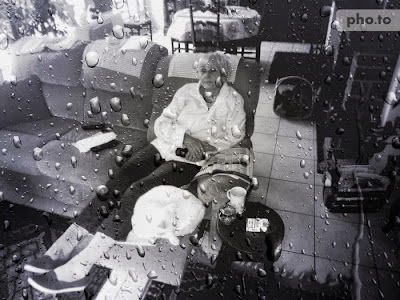 From computer I switched over to TV, but before I folded the dammit laundry.

On Sunday it seemed to be better and a miracle happened the sun came out ! I did a little walk through the market in the neighbor town found an open shoe shop (shops are closed on Sundays) and followed David Bowie's song to put red shoes on, but for that I had to buy them first, which I did. This made me feeling better. 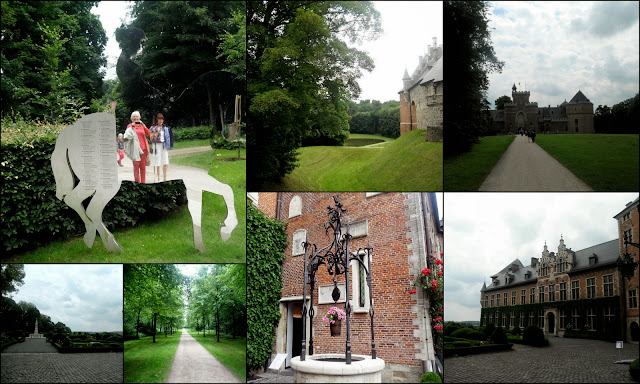 In the afternoon, Ilona who had been in the same mood as I decided to go for a walk in the Gaasbeek park and it was really nice. The wood smelled so good after all this rain, the castle looked beautiful, and there were quiet a lot of people.

After an hour walking through the park, we were thirsty and went to the Tavern located opposite the castle. As neighbors we had 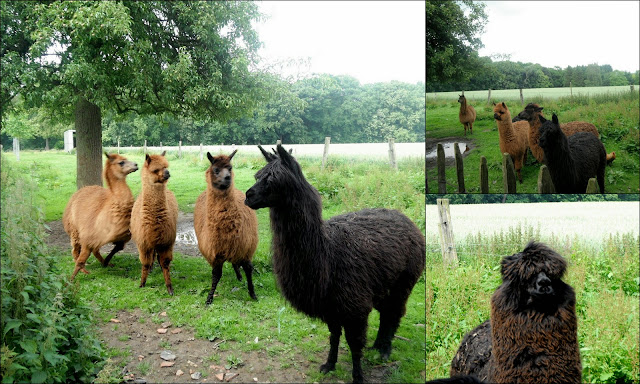 Alpacas, which are new and I saw them for the first time. The "hippie" on the bottom right, cheered us really up ! 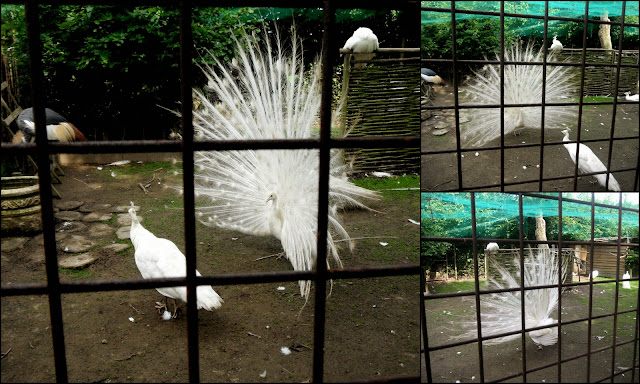 Then we watched the peacock, courting a cute peacock girl, unfortunately without success, she chased him away !

Refreshed and happy we returned home.  Mr. G. had been in Silverstone UK for the Formular 1 again and was also satisfied with his afternoon. He doesn't like to walk !
Posted by Gattina at 06:00 9 comments:

Labels: alpacas, Gaasbeek castle, peacock, rain, shoes, shopping, What did you do this weekend ?

A CONVERSATION THE ITALIAN WAY

On Sundays Mr. G. often calls his sister in Italy, to know how she is and what's new.

It usually starts with : 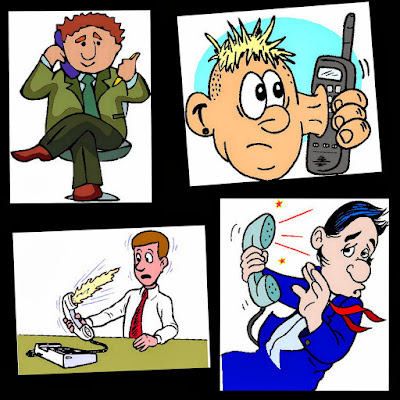 and his face during the conversation. Sometimes I hear him shouting : Listen ! Lalla, listen !!
But no way .... she continues