1. Aqua gym was very hard this time, so that I fell asleep when I started to watch "Escape to the country" and the escaping was long over when I suddenly realized that I had slept ! I belong to the people who when they sleep in the afternoon, feel like if they had a hangover, so I did nothing except escaping to the country on the screen.

2. The GPS which Nicole has gotten for Christmas from her son is still not working properly. He apparently had chosen the most simple one, knowing his mother, but it seems that simple can be complicated. After Mr. G. had tried (then the battery was empty), her cousin, her daughter without any result, it still started from somewhere in Brussels, I met her for a coffee in the Lunch Garden which has free internet and with the help of YouTube where a guy explained the whole thing, I  tried to find out what was wrong. Of course the battery was not fully charged and I had to give up. Now I told Nicole to buy a charger ! We finally stayed there the rest of the afternoon with our tablets and Charlie as usual had a lot of success.

3. Chantal came over to spend the night in our house before her departure to Toronto to take care of her son. She lives  in the next bigger town, which is rather far to drive to the Brussels airport and it also was easier for me because we had to leave very early the next morning. So we had a nice evening together. 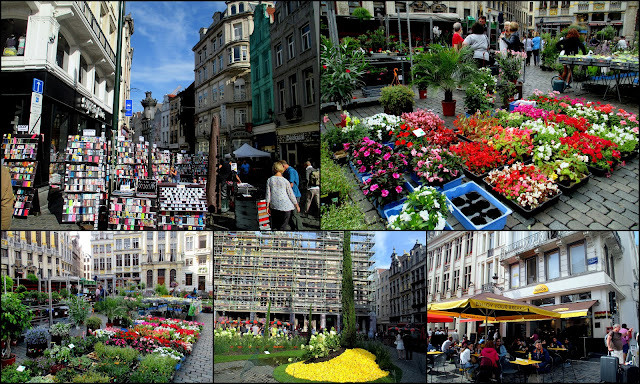 Despite the worrying Mr. Trump about our safety and thinks that we are living "in hellhole in Brussels" the airport looked very peaceful and I didn't even see one policeman or soldier. Mr. Trump must know Brussels very well as he had been here more than 20 years ago and never ever since, but he must have been recently in hell because he knows hellholes so well. I would rather put him in a madhouse. He destroys  the last good opinion about Americans in the whole world ! How is that possible to believe in such a guy ?? 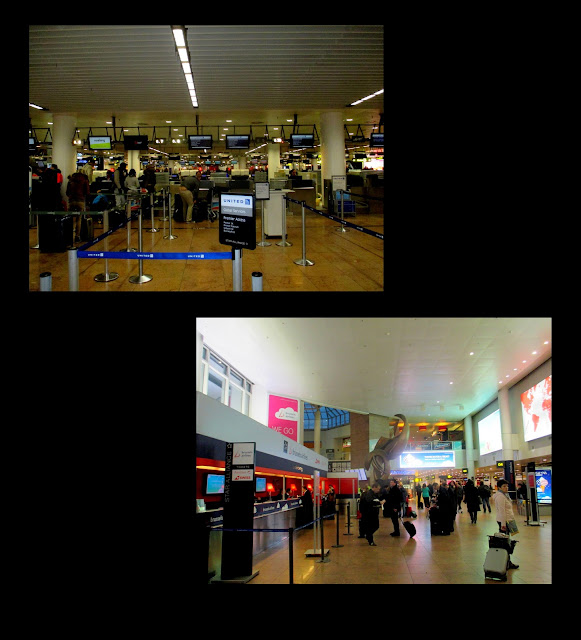 I walked with Chantal to the check in and pulled the suitcase, as she had to walk on two crutches. Once rid of the suitcase she was taken care of by the service for handicapped persons, but before we had coffee and a croissant together. Then I waved good bye and drove home.

There was a lot of traffic on the road to the hellhole !

5. I hadn't wished a happy New Year to Ilona's mother who will be 92 this year. She still lives in her flat, cooks, goes shopping meets with friends and is in perfect health ! An example how to get old !
Ilona came too and we had coffee and cake together and spent a very nice afternoon. Her mother is quite a very humorful lady !

THE VIRGIN MARY IN MY DISHWASHER

A miracle happened ! I saw the Madonna, not the one who sings "I am a virgin" and isn't, but the real one ! 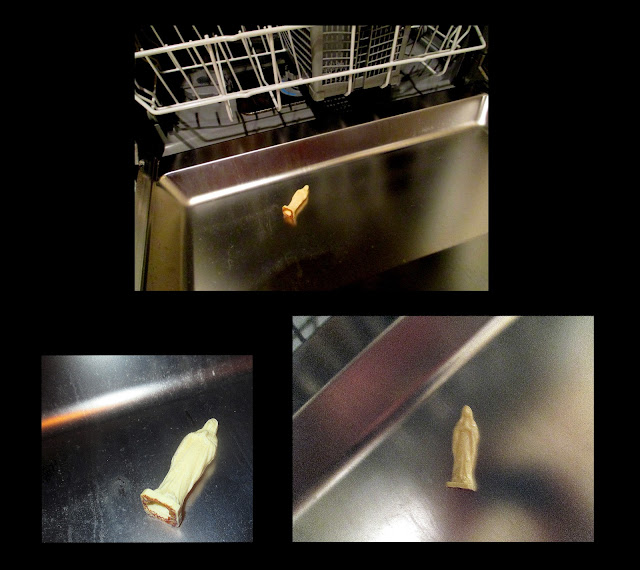 When I opened my dishwasher to put in a plate, I saw something strange laying on the filter. I took it out and had a closer look ! It was a little statue of the Virgin Mary ! In MY dishwasher ! Now why did she choose my dishwasher ? I am protestant and don't have St. Mary's statues in my house I don't believe either that she is a Saint. Maybe by her appearance she wanted to give me a sign ?

I asked Mr. G. he is catholic and used to deal with Holy Marys, but he claimed his innocence he had no clue how this little statue landed in our dishwasher. I looked at my cats, maybe they brought it in taking it for a little mouse ? But that doesn't explain why I found it in the dishwasher. So far my cats are not yet trained to put their bowls in the dishwasher.

I raked my brain and found really nothing. The only explanation would be that it had been in a cake for Christmas, but that's a long time ago and meanwhile lots of dishes had been washed. So we still have no idea.

Meanwhile I keep the little statue as a sign of good luck, it doesn't happen very often that St. Mary appears nowadays and certainly not in a dishwasher ! . 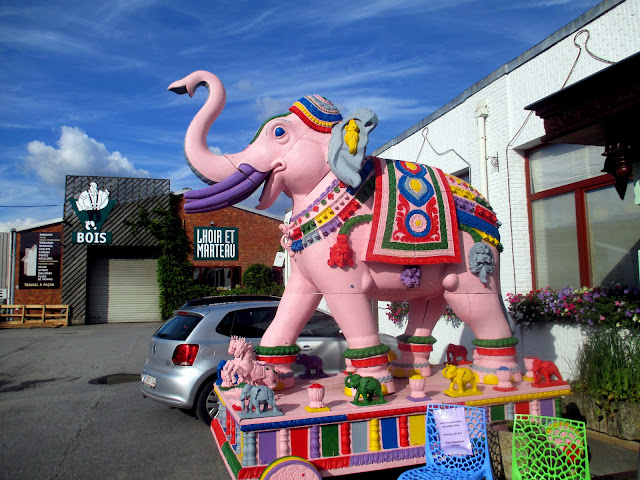 Outside the Indian shop

THE DESTINY OF A FIR 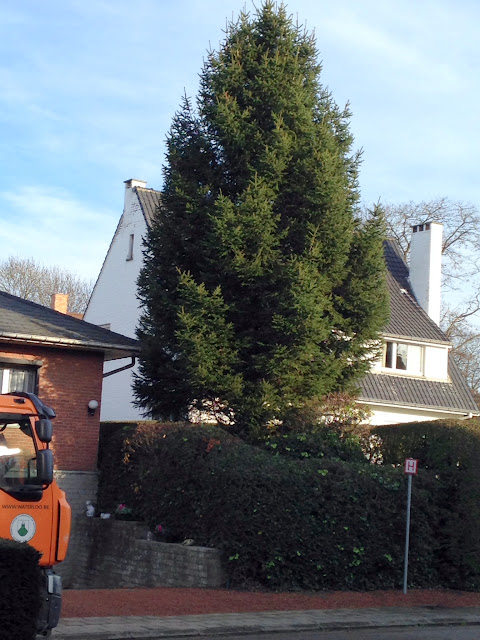 over more than 20 years it stood besides our house and grew and grew. Mr. G. thought it had become far too big and had it cut. As it was such a beautiful tree, the city cut it for free and used it as Christmas tree on a roundabout just at the entrance of Waterloo. 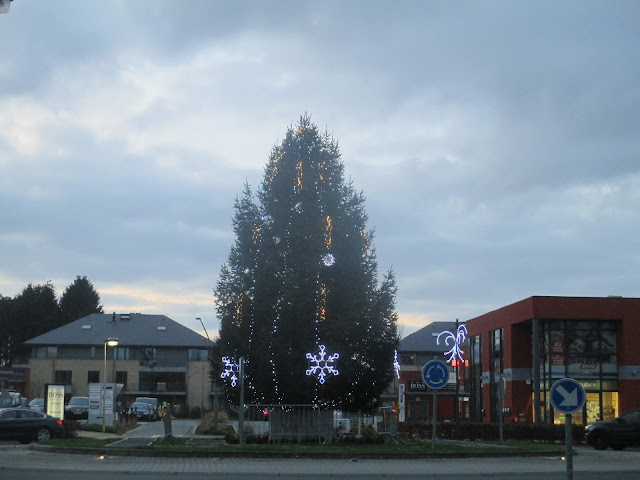 There it stood proudly day 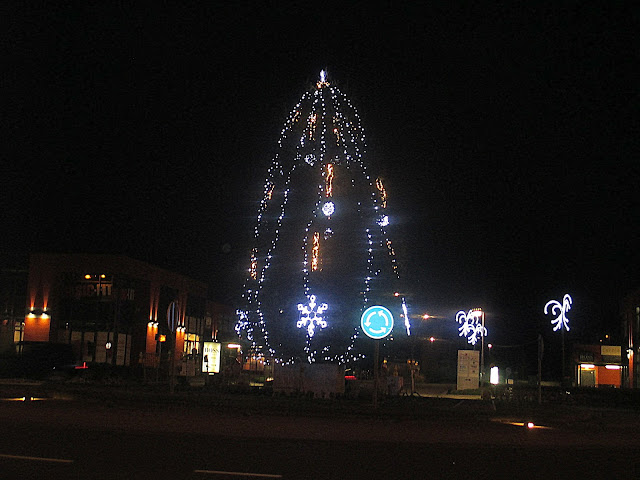 and night for 7 weeks. 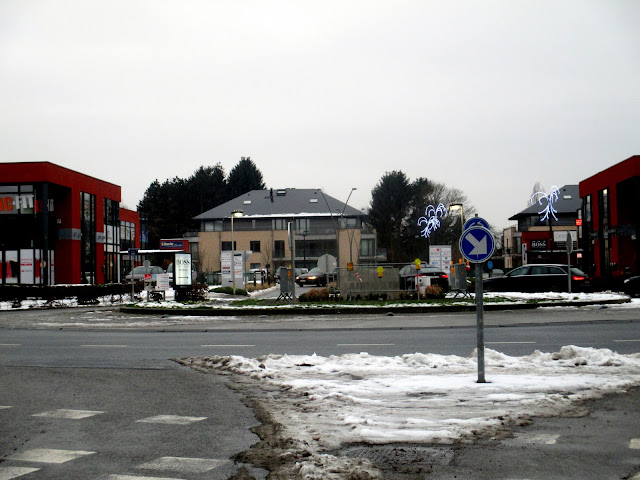 Last week when I drove home the roundabout looked so empty ! Our tree was gone ! I had missed when they took it away. Without roots of course it couldn't stay. Now it has probably become a little hill of ashes.

While in the States they are sinking in snow, we have no snow anymore but rain instead. Ilona had problems with her tablet and had given it for reparation as it was ready we went to the shop together and good news ! she got a new one ! It was probably more expensive to repair than to replace.

After that we went to the charity shop for battered women to see if there was something interesting to buy. I didn't find anything, but Ilona found two very beautiful fashion necklaces and some kitchen utensils. Everything is so cheap in this shop ! By coincidence we met Nicole there, she wanted to walk Charlie in the park opposite to the shop. We didn't go with her as the weather was so cold and humid and we spent the rest of the afternoon home in the warmth with a cup of tea.

Chantal came over on Sunday to give me the departure and arrival hours for her trip to Toronto. Her youngest son was very ill he has a very strange disease called Ghilain Barré and just came out of hospital. As he can't stay the whole day alone and his girlfriend is working she flies over to help. Not such a nice season to travel to Canada in January. She will stay over night in our house and I drive her to the airport next morning.

We made a little tour in our Indian shop I bought two little earrings and my night cream. Nicole joined us and we had a cup of Indian tea in the shop, which was very very sweet. 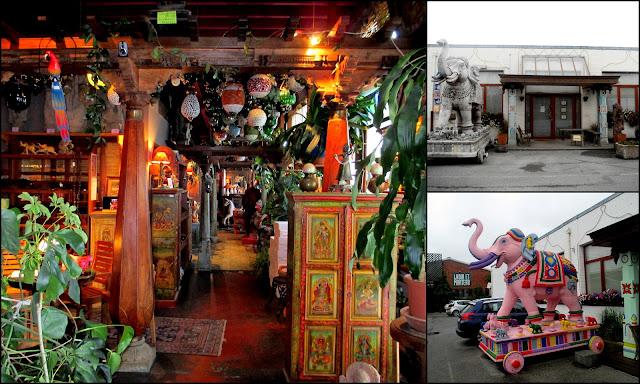 There is a little corner to sit down and have tea just behind the plant. The elephant outside was now painted in pink, I preferred how it was before.