1. Normal life got me back starting with aqua gym ! This time we really had a lot of fun. The young woman Estelle who gives the lessons had chosen music from the 60th, so we all fell back into our youth, we twisted and rocked to all very famous songs ! We of course had never thought at that time that more than 50 years later we would use these dances as aqua gym exercises ! But it worked ! Of course when you are in the water you feel light like a feather, and coming out rather like an elephant.

2. Nicole and I had booked a week in May, because we had gotten a promotion cheque of 500 € last year when we booked for Egypt. Of course we wanted to use that money and go into a warm to hot country. There is not much choice in Europe itself it's still not warm enough. When I got back, Nicole informed me that the trip had been cancelled due to terrorist attack danger ! That made me really laugh ! I can go to Brussels,  where it all started, and other countries tell their tourists not to go to Brussels because it is dangerous and Belgium complains about the lack of tourists especially in Brusssels,  and now I am not allowed to go to Tunisia ! Instead they proposed us Egypt, Morocco and Turkey ! Europe becomes crazy.

3. After checking and choosing we finally decided to book a week in the South of Turkey, where it seems to be very beautiful. I had already seen a bit on one of my round trips but had never stayed there for a longer time. We went back to the travel agency and booked a week for end May. It is rather strange too, that Belgians need a visa while I with my German passport don't need one. That's crazy, apparently in each Belgian there is a hidden terrorist. I could be one too, as I am more Belgian and live here since my teenage times, I only kept my passport because it was cheaper than the Belgian one !

4. My camera doesn't work properly anymore, I can't switch off the flash, the zoom strikes and the pictures are not very sharp. Repairing would probably be as expensive as a new one so I bought nearly the same, a little better, a Canon Ixus 180 with Wifi. Now I have to learn a little more details. Otherwise there is no difference with the old Canon Ixus. 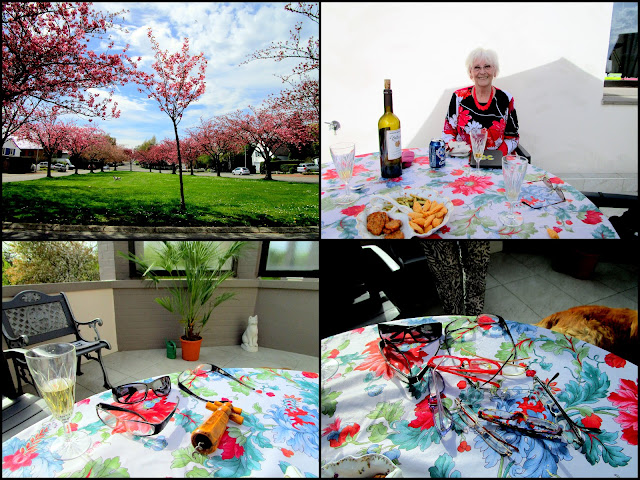 Nicole had invited Chantal, Ilona and me for a little birthday celebration. It was for once a sunny and warm day, we could sit outside and the Japanese Cherry trees were in full bloom.  As usual we had a lot of fun and even more when Chantal wanted to show us a picture of her son dressed as a Sheik when he came back from Dubai ! Ilona needed glasses to see the picture and as the once of Nicole didn't fit, Nicole suddenly disappeared and came back with a whole basket full of glasses which she shook out on the table ! Ilona had the choice and we our fun ! I took the opportunity to try out my new camera !

MEMORIES OF A PREGNANCY

When I was in the south of France, staying with my friend Claudie, her daughter Anna was pregnant but still had at least a month to go. It brought back memories to me. Like her from behind you didn't see anything but in front we both had a big belly as if we had swallowed a football (soccer), although her belly looked more like a big beach ball. 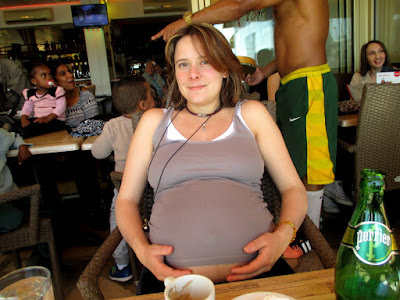 While I was fit like a fish in the water and full of energy, she was very sick during nearly the whole pregnancy except the last month and lost a lot of weight because she couldn't eat anything.

And how times have changed ! When I was pregnant in the 70th, you had to hide your belly and wear special pregnancy clothes which mostly looked like tents. Today women show there bellies and at the beach don't hesitate to let the baby in the belly take a sunbath !

A very posh colleague of mine had given me all her pregnancy clothes and they were just wonderful all very expensive brands, even a silk long evening cloth. The whole outfits must have cost a fortune and she just gave it to me, and was happy to get rid of them.

I still was slim, although nearly end of the 5th month. Each day I watched if my belly grew, because I wanted so much to wear these beautiful clothes. But nothing. I had to wait until the 6th month before I finally could start to wear some of them. That lightened my mood even more and I wanted to go out and show my new feathers, fortunately I was still working and everybody could admire my beautiful pregnancy dresses.

All these memories came back when I sat besides her and saw her belly moving. One evening I really got a shock, suddenly little Alice inside gave her mother such a kick, that I thought now the belly will explode and she will just jump out. Fortunately it didn't happen and I had to laugh about myself because I had already thought what to do, if I should run for hot water and towels or call and ambulance ! 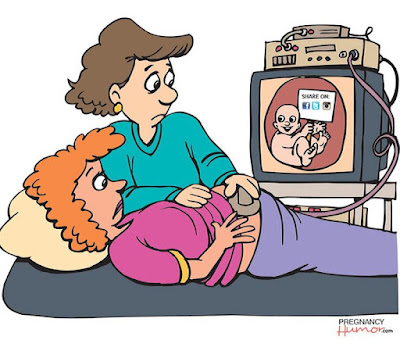 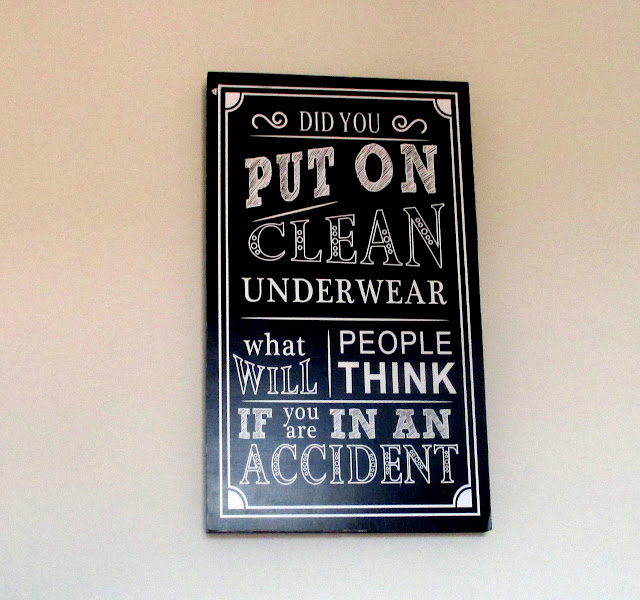 Worries of the past ... seen in a young couples home in France !

ALONG THE PORT OF TOULON

During the Easter holidays I visited my friend Claudie, in Ollioules, South of France near Toulon.

Besides the Military port of Toulon there is another one close to the city-centre, passengers and crew are only a few steps away. They can easily reach the promenade along the marina with its many restaurants and cafés, a main shopping-mall (100 boutiques), read more HERE

I just had the time to unpack my suitcase, when on Friday evening our son with family arrived !
Mr. G. had had his birthday and as it was in the middle of the week they came for the weekend.

The Easter  bunny had brought a Lego box for Toby who has just turned 5 in November and I thought Mr. G. hadn't paid attention because this helicopter was for 7 to 12 years old kids. 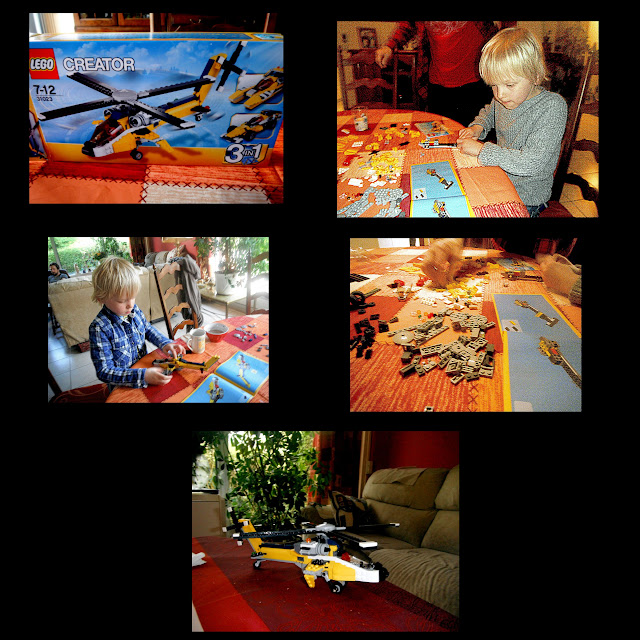 Toby was very happy with this gift and put it together in no time, half on Friday evening and as it was late the next half on Saturday morning. I just couldn't believe it. Sometimes he asked for help but only to push or pull when his little fingers were not strong enough. To me all these little pieces seemed so complicated and I would never have been able to put them together.

And as the helicopter was finished, of course he needed something else and Mr. G. went with him to the toy shop and they came back with another Lego box this time "Ninjago", all new things which I don't know at all, my last Japanese toy invention was Goldrake when my son was little. The Ninjas came later. 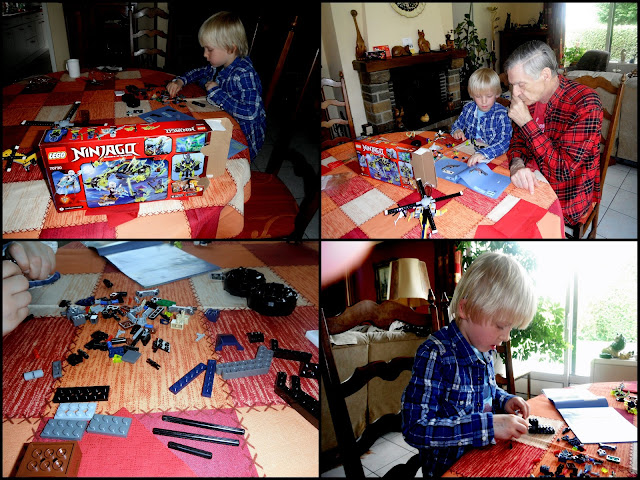 This complicated thing was even worse it was for 8 to 14 years old ! I don't even know what it represents, the guy who invented this has a diabolic imagination ! The figures are so ugly and the whole thing itself. But that is only the opinion of a grandma ! Again it was put together quickly sometimes but not very often, mum had to help, we were completely out !

And here is the car of the future ?? I wonder if I could do my shopping easily with it. 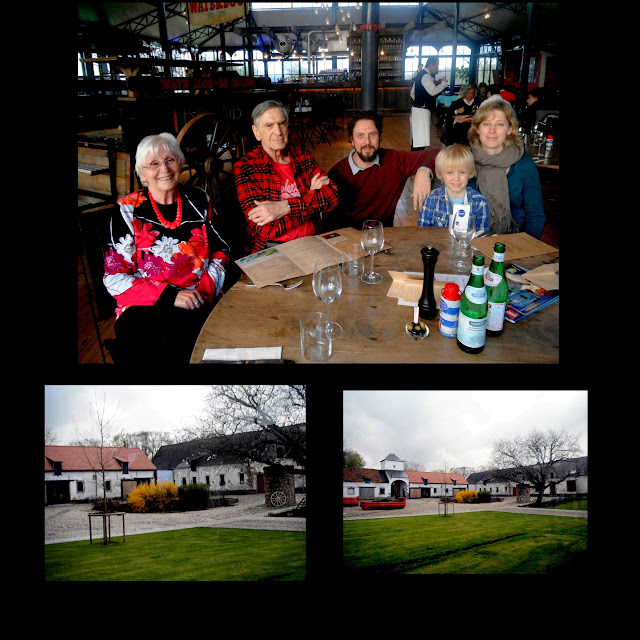 In the evening we celebrated Mr. G's birthday in the restaurant L'Orangerie du Prince Mont St.Jean farm. The meal was delicious and everybody liked the restaurant too. The farm is part of the Waterloo battle. 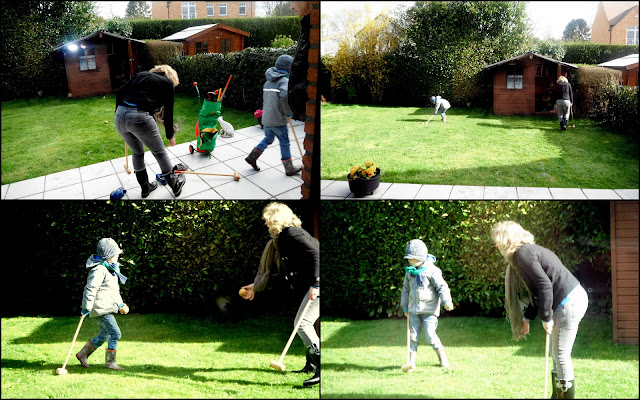 The next day despite the cold weather Toby played croquet in our garden. I stayed inside, I didn't want to catch a cold again. Toby loves very much this game !

Before we went to have lunch with my son's friend, Toby watched a little TV. Arthur was there of course too, but he was quite disappointed this time because Toby didn't play or petted him. The other cats realized that there was not a crazy little boy in the house chasing their tails so they all showed up and slept where they usually sleep. 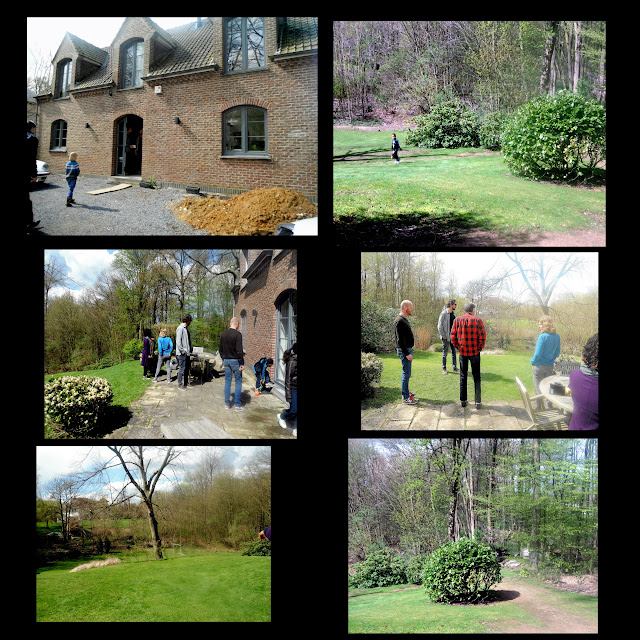 My son's friend had moved into his new house a few month ago, we hadn't seen it yet and found it very beautiful ! Behind there is an enormous garden where the boys ran around built a hut and had a lot of fun. Benji is just a few months older than Toby and they understand each other very well. The two dads were purring ! 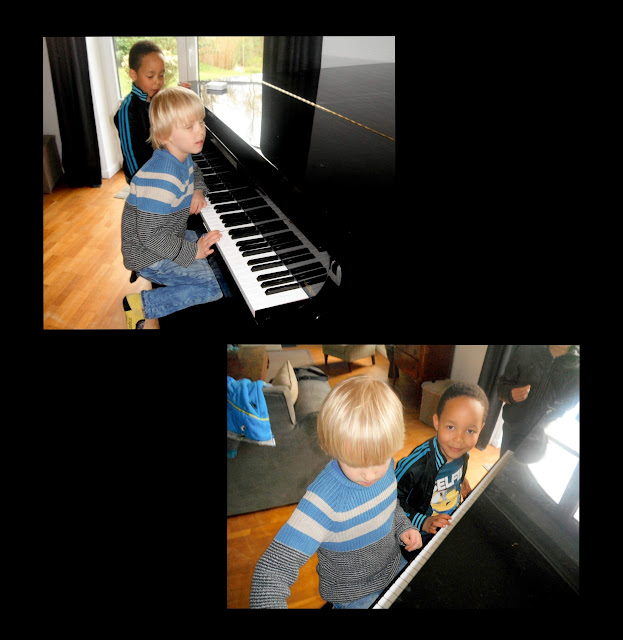 They tried to exercise on the piano, making modern art music, I was looking for my ear plugs in my purse, but had none ! 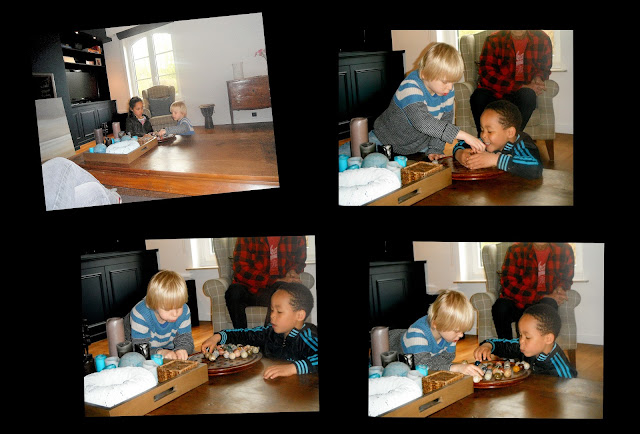 Then they played a more quiet game, called solitaire, while we had our coffee after a delicious brunch with cheese, ham, sausages and other goodies.

Of course we had a lot to talk as we hadn't seen each other since last summer and before they moved.

Time went by so quickly, and we had to say good bye, we returned home and our son with family to Amsterdam. What a nice weekend !
Posted by Gattina at 06:30 10 comments: